Many investors think tech stocks are simply too risky to put in their income portfolios. They’re missing out, because these days, tech companies are throwing off more dividend cash than any sector this side of financials.

According to second-quarter numbers from FactSet, the tech sector paid out a combined $59.6 billion in the 12 months ending June 30, just shy of the $67.7 billion financial firms handed out to investors. The sector’s top dividend payers likely won’t surprise you: Apple (AAPL), kicked out $11.4 billion, with Microsoft (MSFT) close behind at $9.9 billion.

Even bearish analysts are giving the thumbs-up to dividend-paying tech stocks. In Barron’s fall survey of money managers, Ernest L. Jahnke of Seattle-based Washington Capital Management predicted the Dow could fall as low as 13,400 in the coming months. But he still thinks dividend payers like Apple and Microsoft are a good bet for investors.

My 2 Favorite Tech Buys for Income-Seekers

Jahnke’s enthusiasm aside, I’ve got two better tech stocks for income right now. Even though Microsoft yields a respectable 3.0%, its payout has little room to grow, as we discussed a couple weeks ago.

Apple yields just 1.9%, so even if it hikes its dividend at an annual rate of, say, the 10.6% it raised it this year, you’d still only be yielding 5% on your initial investment a decade from now.

That’s just not good enough for serious income investors. Luckily, there are better options in the tech space. These two should be at the top of your list:

Intel Corp. (INTC) has struggled with the shift from PCs to mobile devices, but many first-level investors have counted the chipmaker out on that basis before, and it’s cost them income.

What they’ve missed is Intel’s progress in solid-state drives, which will explode from a $15.1-billion market in 2014 to $229.5 billion in 2022, according to Transparency Market Research. SSDs consist of connected flash memory chips, so they’re faster and more reliable than traditional hard drives, which have moving parts.

Intel just said it will spend up to $5.5 billion in the next few years to retool its factory in China to make flash memory chips for mobile devices and its SSDs; right now the company makes them through a joint venture with Micron Technology, Inc. (MU).

In its post-earnings conference call earlier this month, Intel said sales at its server-chip business would come in “in the low double digits” this year, down from its earlier forecast of 15% growth.

But that’s a short-term blip. In the long run, the switch to cloud computing will force cloud providers to beef up their capacity, giving server sales a big boost. Intel is the direct beneficiary of that, thanks to its 99% stranglehold on the server-chip market.

Meantime, the stock yields 2.8%, and Intel paid out just 38.1% of its earnings as dividends in the last 12 months, leaving it plenty of room to put more cash in your pocket next year, even if sales do soften.

To top it off, the stock is a bargain, trading at just 14.3 times forward earnings, a discount to the S&P 500’s forward p/e ratio of 17.1. Management agrees: through 2014 and the first three quarters of this year, Intel has bought back $13.3 billion worth of its stock. As of September 26, it had $9.9 billion left on its authorization.

Buybacks like these are a big plus for investors because they cut the number of shares outstanding, sending per-share earnings—and often share prices—higher. 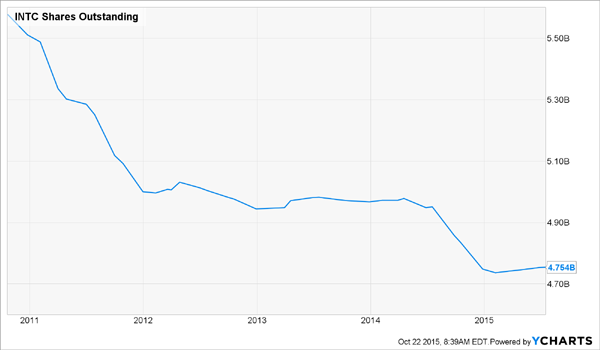 The stock boasts a 3.3% yield and paid out 79% of its earnings as dividends in the 12 months ended August 31. That’s above the 50% I normally like to see, but that figure has been trending lower for more than five years. And Paychex runs such a capital-efficient business that it can shovel out most of its profits directly to shareholders.
Recently, Paychex’s sales, earnings and cash flow have all surged, and there’s plenty more where that came from.

That’s because the outsourcing trend is not going away: according to October 2014 figures from Research and Markets, demand for payroll outsourcing (60% of Paychex’s latest quarterly revenue) will grow at a 3.9% compound annual rate between 2013 and 2018. HR outsourcing (40% of revenue) is on a stronger tear, with a projected 12.3% yearly gain in the same period, according to August 2014 numbers from TechNavio.

But the real tailwind is falling US unemployment, which means more benefits, HR functions and, well, paychecks for Paychex to process. Add in a rock-solid balance sheet, with zero long-term debt and $537 million in cash and investments, and this company’s dividend is one of the safest you’ll find.

Paychex and Intel offer the highest sustainable tech yields you’ll see. But they’re still just in the 3% range, and like Apple, you’ll still need many years of monster dividend hikes before your initial investment yields enough to give you a decent income stream.

So why not grab a head start with a stock I like to call “the perfect income investment”? It delivers you a 7.3% yield right out of the gate, plus it’s a special kind of company that pays no income tax to Uncle Sam! That means there’s even more cash left over for investors like you and me.

And that 7.3% yield is as safe as they come: thanks to its cautious management, this company is only paying out 75% of its funds from operations as dividends, far below the 90% level that’s considered safe for companies in its class.

Get the full details on this “perfect income investment” right now AND the billionaire’s secret system I used to find it.