There’s a select, newly flush group of small banks that appear every year. They essentially mint their own pile of money by taking advantage of a financial phenomenon known as a second-step conversion. In the ensuing months and years after the event, management often shovels it back to shareholders in the form of buybacks and dividends.

The “Class of 2016” is getting ready to swing into action, and many of them will reward their shareholders with double-digit returns next year. It’s a simple formula – they’re going to use their extra cash to buy back lots of their cheap shares.

You’re probably familiar with initial public offerings, or IPOs. Companies put their stock shares up for sale to the public for the first time and get cash back in return.

Some small private banks choose to go public in two steps instead of one. This means that in lieu of selling all shares to the public, they’ll sell some in a “first step” while keeping the rest in what’s called a mutual holding company (MHC). This is where things get interesting.

Several years later, the bank will complete the “second step” of the conversion and sell the MHC’s stake to the public. Since smaller banks tend to have capital-efficient business models, management may not need most or even all of the cash raised in this second sale. This results in an overcapitalized bank – literally a bank with too much money.

A Nice Problem to Have for Management and Shareholders

In December 2010, Capitol Federal Financial (CFFN) completed its second-step and sold its MHC’s stake to the public. CFFN became a fully publicly traded stock and raised $1.2 billion in cash. But they didn’t actually need the billion.

So for the four ensuing years, CapFed returned $852.8 million to its shareholders in the form of share repurchases, regular dividends, and special dividends: 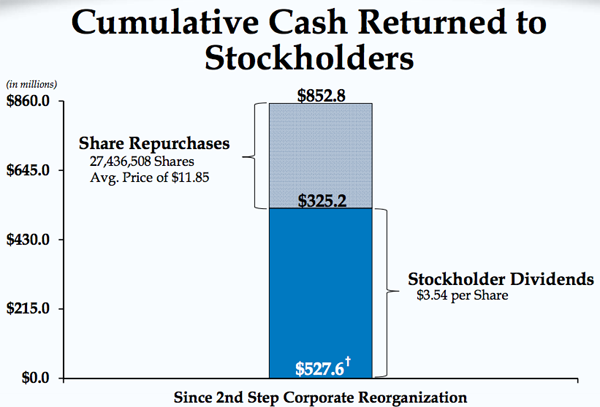 The stock buybacks kicked off a virtuous shareholder yield cycle in which the company was able to increase its earnings-per-share (EPS) from $0.41 in 2009 to $0.56 in 2014 (over a time in which total earnings were flat). Shrinking outstanding shares gave CapFed’s dividends more mileage per share. They’ve averaged a total payout north of 7% since the second-step conversion:

More recently, Clifton Bancorp (CSBK) completed its own second-step conversion in April 2014. Clifton’s stock was cheap, trading just above book value. Management took advantage of the bargain price to buy back its own stock like crazy.

After any conversion, the SEC places a one-year restriction on share repurchases. The minute that restriction ended last April, Clifton pulled 5.4% of its outstanding shares off the market in the following six months. 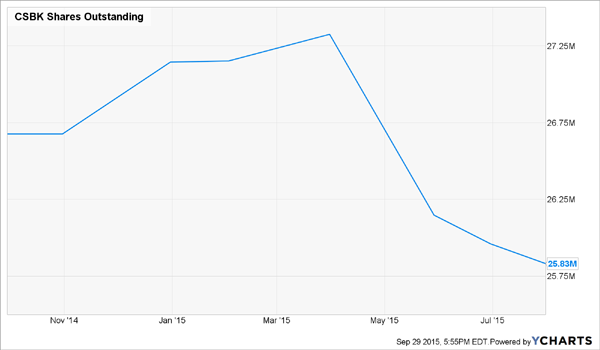 Three 2016 Conversion Opportunities to Bank On

Investors Bancorp (ISBC) completed its second-step one-month after Clifton in May 2014. Management actually asked for and received permission to buy back 5% of its shares before the one-year mark.

With these off the market, ISBC is already onto its second repurchase program – this time for 10% of its outstanding shares. Its stock trades for 1.3 times book value – not quite dirt cheap, but cheap enough to make it a good buy for the company and investors alike.

Beneficial Bancorp (BNCL) fell to a one-year low after it completed the second-step of its conversion in January. But shares have rallied more than 20% since in anticipation of the all-important one-year anniversary mark. Its stock trades just above book value, so it is primed to move on any share repurchase announcement.

The first-step of a conversion can be profitable too. First Northwest Bancorp (FNWB) finished its initial offering in January – which means it’ll be eligible to deploy some of the $121 million it raised for buybacks to kickoff 2016. These could really move the stock, which is currently trading for less than book value. Which means now the time to consider FNWB – before it announces a big repurchase program.

These conversion events don’t show up on any stock screen you’ll see – which makes them great vehicles for big dividends and gains on little-known opportunities. In fact, they’re so difficult to identify that I developed an entire system to uncover these types of income plays. It’s based on the little-known philosophy of a modern-day Wall Street legend – click to learn how it works and discover more 7%+ yields.