Dividend and growth fanatics have argued tooth-and-nail about who backs the superior strategy for decades. But time and time again, deep research shows that investors like you and I that prefer collecting quarterly checks come out on top.

The formula is simple: Plow your money into healthy-yielding dividend stocks – like the three no-brainer buy-and-hold equities I have on tap for you today – and let the outperformance roll in.

However, time and time again I stress the importance of substantial dividend yield. Low, begrudging payouts simply won’t do.

The primary takeaway (emphasis mine)?

I’m highlighting “high-dividend payers” to show you the brilliance of this study. In data from July 1963 through December 2014, this group of researchers didn’t just look at stocks that pay dividends and stocks that don’t, but sliced and diced dividend payers into several groups – “No Dividends,” “Low Dividends,” “High Dividends” and “Extreme Dividends.” That latter group typically included extremely financially distressed companies with unsustainable payouts.

In other words, it’s not just enough for a company to pay some token offering. This research exalts those companies that put you and I first with real, substantial distributions, finding “with the exception of the late 1990s, which witnessed a tech bubble, the performance superiority of the high-dividend portfolio has been remarkably consistent over time.”

So if you really want to hunker down into safe, high yielders that will outperform everything else over the next 20, 30, even 40 years, where should you look?

Unless some lucky scientist trips over a new form of limitless energy that costs precisely nothing to produce, utility companies are going to be unshakeable sources of income for decades into the future.

Southern Company (SO) is one of the utility sector’s biggest members. It’s headquartered in Atlanta and serves customers across seven states through subsidiaries such as Alabama Power, Georgia Power and Southern Nuclear. At the moment, the company is pushing ahead to try to complete what would be the first new U.S. nuclear plant since 1979.

What I love about Southern is how boringly predictable it is. By virtue of being essentially a monopoly, it can tick up prices every couple of years to pad its top and bottom lines. You’ll never get explosive performance, but you don’t need it if you can rely on dependable improvement year after year after year. Sure enough, revenues have climbed 14% in total over the past three years, but that doesn’t even hold a candle to the 46% leap in net income across the same time period.

If you mistook Southern Company for a Dividend Aristocrat, no one would blame you – but it’s technically not. Still, the dividend legacy is something to be proud of, with uninterrupted payments since 1949, and 16 consecutive payout increases (nine years shy of official Aristocrat status).

This is a nice-yielding company whose only fear of disruption would come from a modern technological marvel. Southern is solid.

If Southern Could Sing, It Would Belt Out “Cha-Ching!” 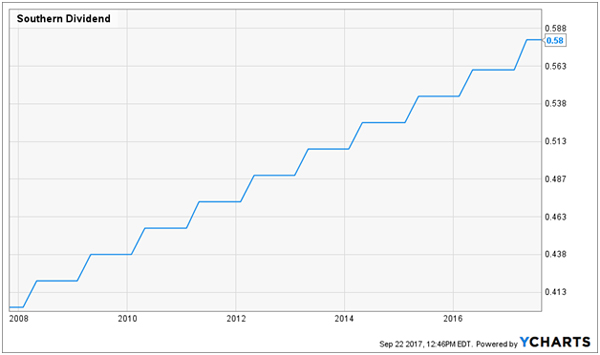 Pfizer (PFE) seems to specialize in fits and starts, so understand that an investment in this Big Pharma play likely will result in a bad year here or there. But over the long haul, this well-heeled pharmaceutical giant is positioned to reach new heights.

Pfizer has its tentacles around just about every facet of the pharmaceutical business. It features drugs such as Prevnar, Lyrica and Lipitor, but it also owns several consumer brands such as Advil, and even boasts a generics business.

Morgan Stanley analyst David Risinger recently became a believer, upgrading the stock from “Neutral” to “Overweight” and lifting his price target amid optimism on several fronts. “We believe (Pfizer) shares are poised to outperform given global rollout of #1 growth driver Ibrance, the stock’s favorable risk-reward and M&A optionality,” Risinger said, referring to the company’s treatment for advanced or metastatic breast cancer.

All these products are helping Pfizer recover operationally from a pretty s8ignificant dip from 2013-14. In fact, the company’s 2016 top line of $52.8 billion eclipsed its revenue level from three years ago.

And should Pfizer’s pipeline get stale, it has about $20 billion in cash and investments to throw at the problem.

Also, worries based on the company’s dividend payout ratio are a bit exaggerated. While the company is paying out about 90% of profits in the form of dividends, it’s hovering just above 50% of free cash flow – right in my “safe” zone for continued payout growth. 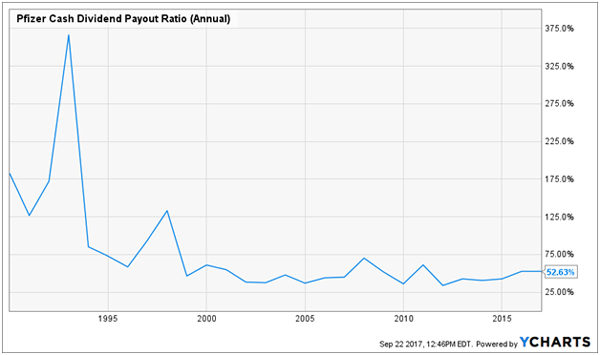 Life Storage (LSI) is one of several stocks in the wildly attractive self-storage space.

I realize there’s nothing “wild” about stashing a bunch of old furniture and keepsakes into a locker somewhere, but like Southern, what’s exciting about Life Storage is the breathtakingly boring nature of Life Storage’s business – and Americans’ constant need for it.

You see, Americans need self-storage in all times, boom or bust.

In the midst of sluggish economies, many families are forced to downsize. But when their things won’t fit into a smaller house, they don’t run off and sell everything. They put their things into storage units until they can expand back into a larger home. And when things are good? Consumers over-buy, find themselves with too much stuff, and call up Life Storage for a solution.

It’s funny. While I’ve spent some time looking at real estate investment trusts that are either potential Amazon.com (AMZN) victims or even Amazon-proof, I’ve come to realize that self-storage units are seemingly Amazon-abetted, with the simple and mindless purchasing platform that is e-commerce only helping Americans acquire more stuff.

Life Storage (LSI) Is Killing It 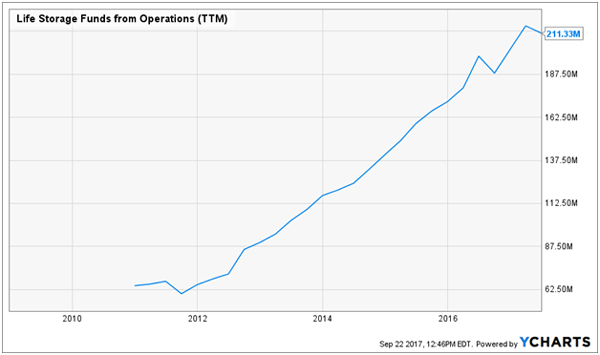 As for Life Storage itself, the company operates 650 self-storage facilities across 29 states, and it has developed some serious technology to maximize profits, with a “Revenue Management Model” that helps monitor and adjust store pricing as it analyzes supply, demand and competition.

Best of all for new money: Self-storage REITs appear to be leveling out after more than a year of working up a head of froth, so they’re not only priced to buy, but ready to spring back higher!

These 7 Dividend Growth Stocks are Flashing “Buy” Today
I’ve scoured thousands of stocks out there right now, looking for the very best companies that have both rising dividends and strong buyback programs in place … the kind of stocks that could easily spin off annual total returns of 12%, 17%, even 25% or more … doubling your money in very short order.

Right now, at this very moment, there are seven in particular that I think you should consider buying.

Click here for a quick rundown on my 7 favorite “Hidden Yield” stocks – including the company names, their stock tickers and my recommended buy-up-to prices.