No matter who wins the November election, infrastructure stocks should get a bounce. We’ll talk best plays in a minute – but first, let’s recap the rhetoric.

Clinton says she’ll push for a five-year $275 billion plan that, with loans and leverage, would total up to $500 billion. Trump says he’ll double that.

Of course I wouldn’t buy any stock based on a politician’s promise alone. But many industrial companies pay yields at the high end of their historical averages. Some are compelling values, especially when you consider that the global manhunt for yield has driven most payout percentages down near multi-year lows rather than highs.

CNBC called me up last week to ask for three infrastructure ideas. You can watch the full clip here – and if you’re interested in more details, please read on for my full take. 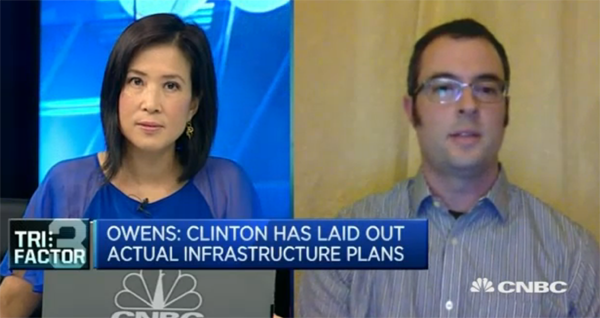 Yes, they did I explained. Which is the best time to buy the heavy-duty engine maker – because if you wait for sales to rebound, you’ll miss the stocks’ rebound too!

Demand for Cummins’ products is cyclical, and this is its third revenue downturn in the last ten years. Each previous downturn has been a good time to buy CMI: 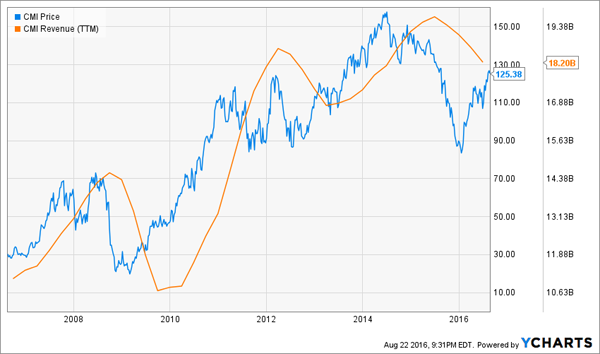 The perennial worry that investors have regarding Cummins – especially during downturns in trucking – is that manufacturers will eventually produce these engines in-house. Navistar (NAV) recently tried, spent a bunch of money, and ended up sticking with Cummins. These concerns tend to be overblown.

Also, management is quite adept at generating gobs of free cash flow (FCF) regardless of top line action. Cummins has generated significant FCF growth over the last decade, which has powered impressive 1,000% dividend growth! 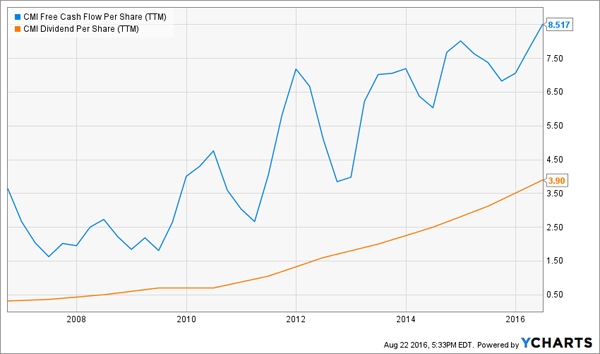 Today’s dividend is still less than half of FCF. The company should have no problem paying its investors during this cyclical downturn. And the stock already yields 3.3% today, nearly its highest payout since the financial crisis.

Deere (DE), my second stock, is a bit underrated when it comes to infrastructure. In 2015, $6 billion of the company’s $26 billion in sales were generated from the construction industry – with agriculture representing the rest.

Speaking of which, the best time to buy Deere is when corn, wheat and soybean prices are low. Troughs in ag prices tend to mark troughs in Deere’s profits – and share price:

When Corn is Cheap, Deere is Cheap 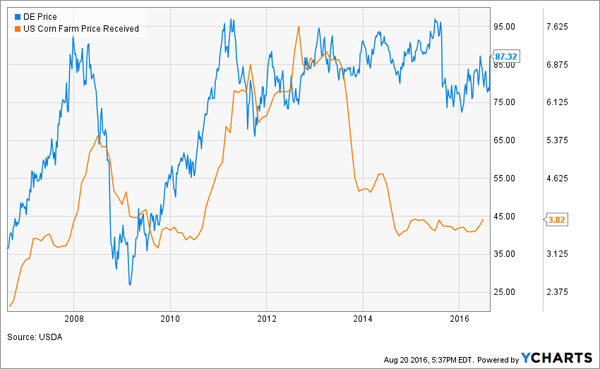 Corn and wheat are languishing near 10-year lows. But low prices tend to be the cure for low prices, as farmers cut back acreage and reduce supply. It’s only a matter of time before grain prices – and Deere’s share price – rallies.

Like Cummins, Deere has improved its cash flow generation through all points of its business cycle. Grain prices last peaked in 2007, but the company raked in nearly twice as much cash in 2013 and 2014 than it did at the top of the last ag bull market:

Management will use excess cash to boost its payout and buy back shares if its stock remains cheap. Deere pays 2.8% today.

Finally I let Pauline and her viewers in on the WEC Group (WEC) secure dividend secret. In a world of expensive utilities, it’s one of the only names worth buying today.

WEC has grown its dividend an amazing 330% over the last 10 years, and its total stock return hasn’t been far behind: 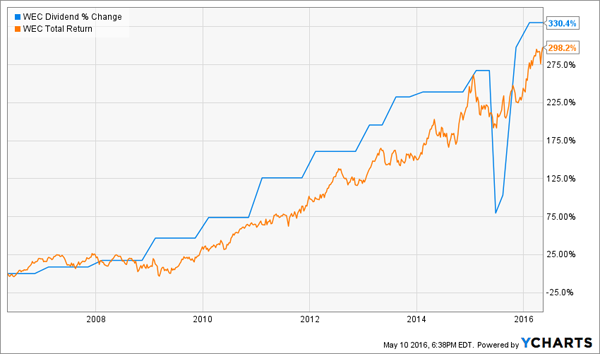 WEC generates more than 99% of its profits from regulated operations, which means they’re protected even if energy prices fall again. Multi-year infrastructure projects will help the utility grow earnings at 5-7% annually beyond 2016 – twice as fast as many of its peers.

Its dividend (and stock price) should grow at the same rate. Which means you can buy WEC for a 3.4% yield today – a slightly better payout than the slower growing Utilities Select Sector SPDR ETF (XLU) – and see 5% to 7% annual stock gains. That’s an 8.4% to 10.4% annual return that’s about as secure as they get.

But What If You Need More Income NOW?

There is one problem with these three stocks – their current yields are still relatively low if you’re actually trying to retire on dividend income alone.

A $1 million portfolio will only earn you $32,000 or so in dividend income annually invested in these shares.

A million bucks gets you Bernie Sanders’ $15 minimum wage in retirement. How sad.
The solution that financial advisors pitch is a “4% withdrawal rate”. These guys (who have not successfully retired yet themselves, by the way) say that you should supplement your dividend income by withdrawing 4% or so annually from your capital basis. Sounds good on paper but it’s often bad news in reality due to some disastrous market math.

You’re forced to withdraw money at exactly the wrong time. The dividend is fine, but you need to sell shares for additional income. Remember the benefits of dollar cost averaging that built your retirement portfolio? This is the same phenomenon, but in reverse!

With a 4% withdrawal portfolio, you sell more shares of stock when prices are low, and less when prices are high. Not good – it’s actually a recipe for running out of money.

If you’re worried about a stock market pullback or crash – and I don’t blame you with equities near record-high valuations – then we need to transition your portfolio away from the casino of stock prices into the steady staircase of dividends.

The secure solution? Create a portfolio that can actually generate meaningful income. Ditch the stocks that pay you like you’re making lattes for a living, and secure yourself a 2-3X pay raise while still keeping your capital intact to boot.

I’m talking about issues that pay 7% or even 8% or better. It is possible to bank $80,000 per year on a million bucks, and never have to tap principal. You just have to know where to look. Click here, and I’ll share my three favorite stealth “no withdrawal” income plays.