3 Overpriced REITs (And Where to Find the Cheap Ones!)

The stock market may be expensive today, but there are still bargains available in the REIT (real estate investment trust) world. Thanks to political, interest rate and even Amazon (AMZN) worries, you can add 7%+ real estate yields to your portfolio from the convenience of your brokerage account.

That said, there’s no reason to pay top dollar for REITs – not now, not ever. Today we’ll highlight three expensive REITs to avoid, and lead you toward some of the best bargains in the sector.

Price matters. Consider General Electric (GE), which has been a merely OK performer over the past few years, but has really punished investors who buy in during valuation peaks. To wit, the chart below shows what happened to investors who bought in at a P/E of 35 … a compression to “only” 30 has contributed to a roughly 25% loss in GE shares year-to-date, and it still looks overpriced! 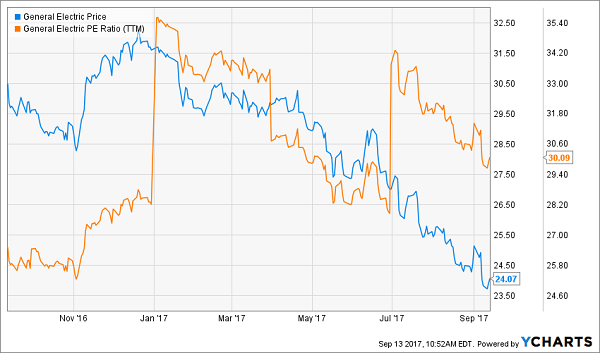 REITs look more attractive today. The most recent Lazard US Real Estate Indicators Report points out that sector valuations are leveling out thanks to growing earnings and funds from operations (FFO) – a critical measure of REIT success. Specifically, the sector is “trading 0.3 multiple points above long-term averages at 16.8 times P/FFO,” thanks in large part to “generally solid” second-quarter results.

Now, let’s take a look at three REITs whose prices are simply too high right now. With downside outweighing upside, you should avoid these three names.

I’ve previously extolled the virtues of “manufactured home” community REITs that serve a real niche by providing affordable housing to lower-middle and lower economic classes. There are few large players in this space, and the few publicly traded options that exist have a clear path to growth.

Sun Communities (SUI) is one such REIT, offering three different community types: “mixed-age communities,” “Active 55+ communities” and RV parks, many of which are loaded with amenities such as pools, fitness rooms and even pet parks. Customers have the choice to buy or rent homes within some of these communities, and even move existing homes onto Sun’s properties.

Make no mistake: This is a good formula, with shares easily trouncing the market and the Vanguard REIT ETF (VNQ) by nearly triple since the start of 2014. That’s on the back of good operational performance, including FFO growth of 13% over the trailing 12 months.

But SUI is unquestionably stretched, trading at a P/FFO ratio that’s more than 25% higher than the sector average. Moreover, this REIT only yields 3.1% – something I’d be happy to reach for if the company was rapidly growing its dividends, but it’s not. Sun Communities has only upgraded its payout twice in the past decade – and by a combined 6%, no less!

Given the merely so-so income picture, I strongly suggest avoiding Sun Communities until its price comes down.

Sun Communities (SUI) Looks Too Much Like Icarus Right Now 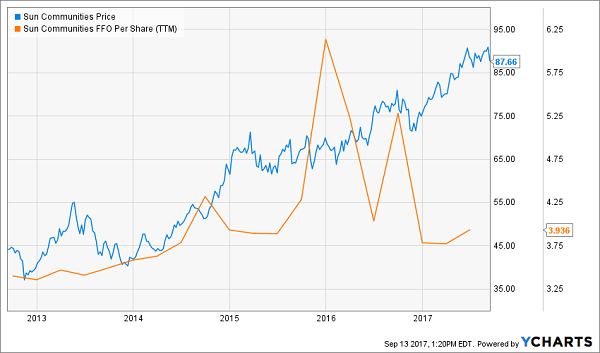 My feelings aren’t at all mixed about Alexander’s (ALX).

Some of you may remember Alexander’s as a NYC department store chain that thrived in the middle of last century. But the company’s declines in the 1970s and ‘80s led to an eventual bankruptcy in 1992 before reorganizing as a REIT and selling off some of its properties.

ALX – under the direction of Vornado Realty Trust (VNO), which holds a 32.4% interest – is now focused on developing those few remaining properties, which number a mere seven at present, all in NYC.

It’s the right place to own real estate, but ALX really hasn’t capitalized – and nor have shareholders. Alexander’s quickly rebounded out of the 2008-09 market crash, hitting pre-recession highs in 2011. Since then, however, shares have simply been rangebound and haven’t topped the $450 mark since 2015.

Meanwhile, Alexander’s P/FFO is rising while funds from operation are declining – FFO has slipped in three of the past four quarters for an overall dip of 2% in the training 12 months.

There’s no value proposition here, and ALX isn’t paying us enough to sit around and wait for a growth story to emerge. Next.

Alexander’s (ALX) Is a Seesaw. Don’t Get On. 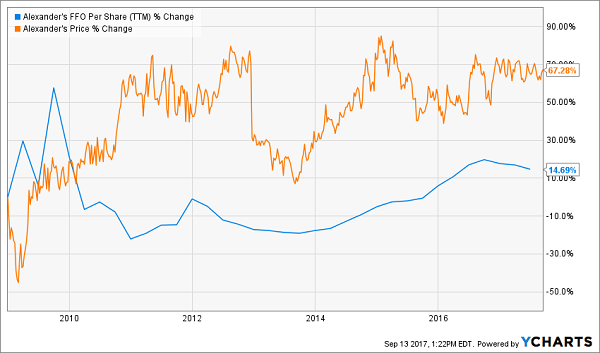 Saul Centers (BFS) primarily targets two types of properties, both of which include retail – and right now, retail is mostly toxic.

I do like the thesis here. Saul Centers’ portfolio includes 59 “community and neighborhood shopping center and office properties,” with 85% of cash flow generated from the Washington, D.C./Baltimore area. The company’s strategy is laid out in its acquisition criteria:

The first bulletpoint is attractive, as Saul clearly is looking to expand its presence in the seemingly can’t-miss residential boom in the D.C. area. And given BFS’ performance over the past few years, clearly something is working. 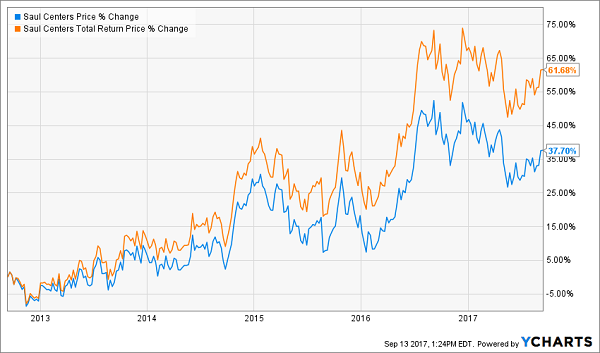 Still, both bullets show some reliance on retail, which gives me pause – even grocers are increasingly under attack from Amazon.com (AMZN) and its grocery-delivery potential now that it has Whole Foods’ infrastructure to improve its distribution system. So while I love the residential exposure, I don’t like the commercial aspect going forward.

The business side has me on the fence, but the fundamentals clinch it for me. FFO over the past four quarters has been virtually flat. The dividend, while growing adequately, offers a shrug-worthy yield at the moment. Throw in a sky-high P/FFO of 20, and I’m out.

Where to Find Bargain REITs With 7% Yields

Right now is a fantastic time to buy REITs, so don’t settle with this trio of flawed picks. Not only are they expensive, but they’re also dividend middleweights, offering mere 3% to 4% yields that are sure to come up short when it comes to paying the bills in retirement.

Why isn’t that enough? Let me show you the simple math. If you’ve saved half a million dollars over the course of your career, but you’re locked into slow- or no-growth stocks that yield 4% on the high end, you’ll earn just $20,000 a year in retirement income.

Low cash flow like that will force you to to claw away at your nest egg year after year just to make ends meet. And every time you do that, you slash your annual income potential, which means you’ll have to sell off even more the following year!

But you don’t have to make those hard choices.

For example, my top REIT buy right now pays a rock-solid 8.1%, and it recently hiked its dividend by 4% over last quarter’s payout. That marks this income wonder’s 20th consecutive quarterly dividend increase!

As I said, this REIT pays 8.1% today, but that rockets up to 8.5% when you consider we’re on track for 4 MORE dividend hikes in the next 12 months!

And the stock  is trading for less than 10-times FFO. Very cheap.

I’d like to share all the details on this overlooked income wonder with you. Plus, I’ll reveal my other favorite REIT right now—wa 7.6% payer backed by an unstoppable megatrend that will fuel dividends for the next 3 decades!