Real estate investment trusts, or REITs, have been on a tear. For instance, Lexington Realty Trust (LXP) is up a shocking 32% year-to-date, and it also happens to be a stock we recommended a few weeks ago. Many more REITs are up double-digits over the past year, making income-hungry investors wary of buying at too high of a price.

This is especially true for indexing the sector, as Vanguard’s REIT Index Fund (VNQ) is up 16.9% in the last year versus the S&P 500’s modest 3.6% gain. This is great for people who bought at the bottom, but anyone looking to get into REITs now needs to be wary about blindly buying companies that comprise a broader index.

To find the best REITs, we first need to look at the macroeconomic picture. Despite gloomy mainstream media reports, America’s economy actually seems to be getting stronger as last month’s jobs report showed (with almost 300,000 new jobs created, far beyond expectations).

Also, two big employers—JP Morgan (JPM) and Starbucks (SBUX)—recently announced they are giving raises to all their employees. And talk of a $15 minimum wage has gone from the political fringes to the center of the Democratic party platform.

All of this spells more consumer spending and more inflation. This also means landlords will be able to raise rents, thus increasing funds from operations (FFO) for REITs. This is part of the reason why these companies have been soaring, and why they will continue to go up in the short term.

So if we want to become the landlord and cash in on the rising tide that America’s economy is now floating on, where can we do it without overpaying? Here are three REITs that are well positioned but still overlooked by the market.

Apple Hospitality REIT (APLE) is a hotel REIT with 180 properties in 30 states, all operating under Marriott or Hilton brands. So buying APLE  means buying into high-quality properties in good locations that keep drawing travelers. According to STR, Inc., a hospitality research firm, hotel occupancy is trending near its highest level in history. Travel is strong and probably going to get stronger as Americans have more cash to burn.

On top of that, Apple Hospitality’s 6.2% dividend is more than amply covered by its funds from operations (FFO) – the actual cash generated by the business. Over the last four quarters, FFO has been 112% of dividends paid: 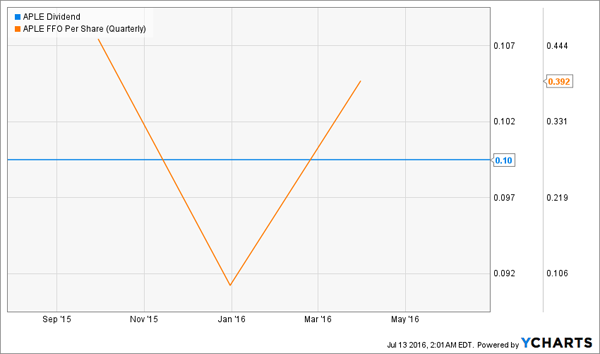 Meanwhile, the stock is almost flat over the past year, with less volatility than most small REITs experience: 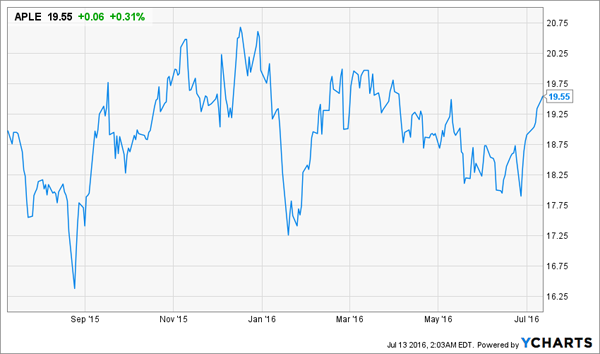 Why isn’t the market grabbing APLE? Simply put, it’s a small and new stock. Having gone IPO a little over a year ago, this $3.4b market-cap name hasn’t got the attention of many REIT investors, which has kept demand down. On average, less than 700,000 shares are traded per day—or 0.4% of total shares outstanding. That’s a sign of tremendous apathy in the market, and a sign that we need to buy now.

Apartment Rents Going Up? So will Bluerock Residential

Bluerock Residential Growth REIT (BRG) is another new REIT that so far has remained under the radar. The company has a portfolio of 20 trendy apartment complexes in the south, where population growth remains stronger than in many other parts of America. But due to its youth and its size—its market cap is less than $300 million—the stock hasn’t gotten the attention it deserves, which is why it’s up only 4% over the last year: 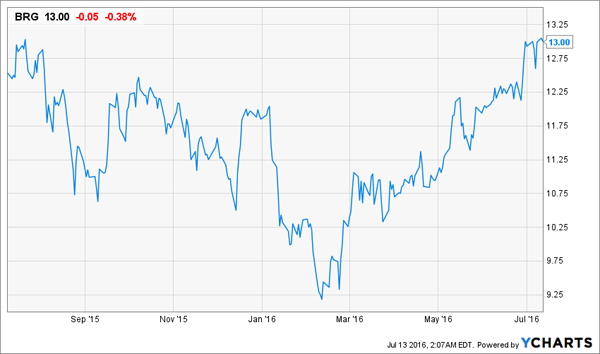 Bluerock Residential specializes in urban and near-urban apartment complexes that have modern amenities and affordable prices, like its Houston Alexan CityCentre property which offers over 300 apartments, an infinity pool and a fitness center. Millennials love these kinds of properties, and an improving job market will help them afford higher rents.

There is a risk with Bluerock, which is why its 9% yield is massively bigger than many REITs: its FFO is currently less than its dividend payouts. However, I’m not worried for one simple reason: Bluerock is expanding aggressively. Its current dividend payout is not based on current funds from operations, but from its potential to expand beyond its current footprint. Last quarter, revenue jumped 84% on a year-over-year basis, demonstrating how much the company is successfully growing.

As the labor market improves and more young professionals look for apartments, Bluerock will see more demand for its units. The fact that it is growing right now, in this market, makes it an appealing buy.

Cashing in on Aging Boomers with Sabra Healthcare

Sabra Healthcare REIT (SBRA) is another high yielder, with a 7.7% payout. It’s a bit older but still relatively new, having gone IPO in late 2010. It’s also down 19% over the last year: 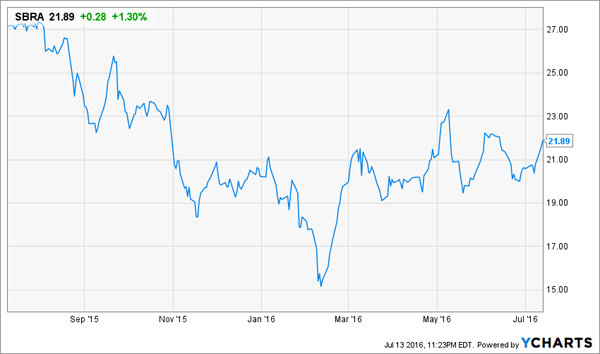 Despite this, the company’s dividend coverage is on the higher end of the REIT sector, with FFO covering payouts by 138% in the last year. Meanwhile, revenues are rising an average 30% year-over-year over the last few quarters. These are all fabulous numbers, but the stock still hasn’t recovered from last year’s steep decline in REITs broadly, even though many of its peers have.

Demand for healthcare facilities is going up as America ages, and the double-digit revenue growth at SBRA demonstrates its prime position to profit from this demographic trend. The fact that the market has not snatched up SBRA yet means that the run-up in REITs isn’t quite over yet, and there are still sectors to capitalize on changes in America’s outlook that the market still hasn’t figured out.

And 3 High Yield Funds to Compliment Your REITs

As I mentioned, many REITs are overbought and overpriced. But there are some pockets of “under the radar” funds that are paying healthy yields AND likely to see 15% capital gains to boot.

I like three funds in particular that are also admired by the “Bond God” Jeffrey Gundlach himself. He says he’d buy them if he could, but the $80 billion he has under management hamstrings him as he’d move the entire market if he started buying.

Fortunately that’s not a problem for you and me. We’re free and clear to bank these 8%, 8.4% and 11% annual dividends with up to 15% additional price upside. Click here and I’ll share the details on these “slam dunk” income investments along with the names, tickers and buy prices for my three favorites.