Feel like you missed out on the Brexit bargain hunt?

If so, you’re not alone. You had to be quick to snap up cheap dividend growth stocks when the S&P 500 plunged 5.7% in the two days following the vote, because five trading days later, it had largely recouped that ground.

So now it’s back to slim pickings for income investors. With the S&P 500 hitting new highs seemingly every day, valuations are stretched and dividend yields are down, as you can see from this snapshot of the trailing-twelve-month yield on the SPDR S&P 500 ETF (SPY): 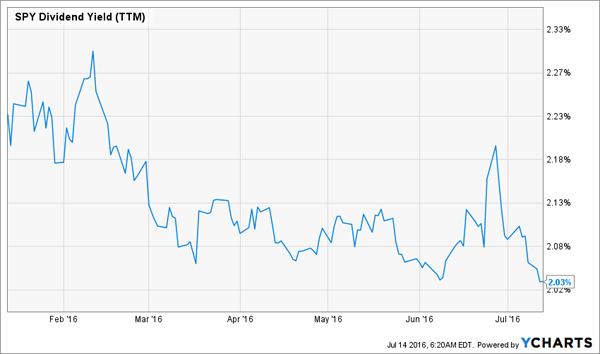 But don’t worry. No matter how richly valued the market is, there are always strong dividend growers that aren’t getting a fair shake from investors.

Here, in order of attractiveness, are four bargains that should be on your radar now. Further on, I’ll show you another stock that’s cheap for the wrong reasons. If you’re holding it, you should sell right away.

The first is GM’s trailing-twelve-month P/E ratio, a figure you’d expect from a company about to close its doors, not one that’s crushed analysts’ earnings expectations for four straight quarters, by an average of 21%.

GM’s shift away from selling to rental fleets has slowed its sales. In June, for example, its total U.S. shipments fell 1.6% from a year earlier, but that was because 22% fewer cars went to rental companies; sales to actual people rose 1%.

This is a great move by GM, as rental companies buy at deep discounts, then sell the cars a year or so later, when they compete with new vehicles for buyers. But unfortunately, Wall Street punishes long-term thinking, which is why the stock has trailed Ford (F) this year: 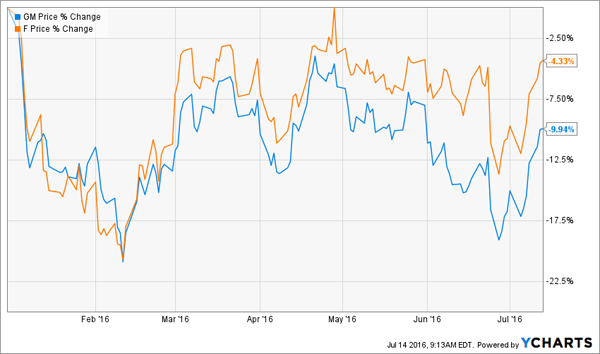 But low expectations are what served up this opportunity. And buying now means you’ll lock in our second key number: 5.0%—the stock’s juicy dividend yield.

Best Buy (BBY) has gained 4.5% since I recommended it on June 20. But with consumer spending rising, employers hiring and interest rates going nowhere, this undervalued dividend grower is just getting going, especially when you add the looming back-to-school and Christmas shopping seasons into the mix.

Even so, the stock is buried deep in the bargain bin, trading at just 10.9 times forward earnings, well below its industry, at 16.9 times. 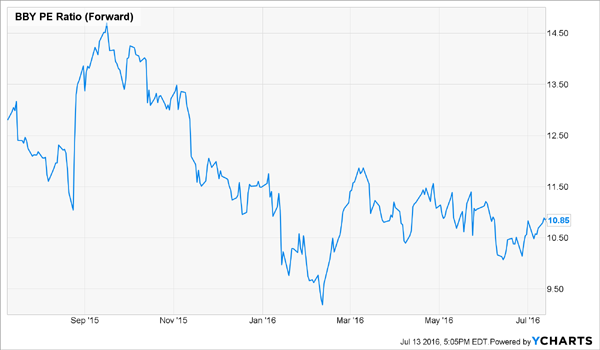 There’s plenty of room for more dividend hikes—and even another “special”— thanks to Best Buy’s safe 48% payout ratio and healthy balance sheet, with $3.1 billion in cash and just $1.4 billion of long-term debt.

Whirlpool Corp. (WHR) is among the few bargain dividend growers remaining from the Brexit bonanza—but only just. The stock’s down 2.4% from its price on the eve of the vote.

But Whirlpool should easily shrug off Brexit, as its U.K. exposure is low, at just 5% of its international sales (WHR gets half its revenue from outside North America).

Whirlpool yields 2.3% today, but the payout has doubled in the past five years. Let’s get in line for the next big dividend hike as we ride the share price higher.

PPG Industries (PPG) comes fourth on my list because the maker of paint and industrial coatings isn’t what you’d call a screaming bargain, trading at 17.2 times forward earnings, just below its five-year average of 17.3.

Tightly run PPG is a great example. In the first quarter, it managed to boost adjusted earnings per share by 11%, even though the strong greenback kept sales flat. This was the 13th straight quarter in which PPG posted a double-digit rise. 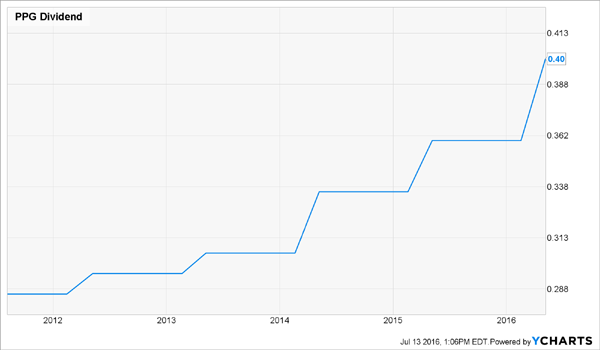 The topper? PPG is big on share buybacks. That lets it return cash to shareholders without getting them hooked on the dividend juice—a smart move for a company peddling cyclical products.

…And 1 Dividend Cutter to Dump Today

For one, the New York-based investment firm boasts a negative payout ratio. That means it’s both paying a regular dividend and losing money—not exactly a recipe for payout growth.

That’s after the company shifted from its policy of paying out a percentage of its profits as dividends to a flat quarterly rate of $0.16. In other words, it cut its dividend, and steeply: this year, KKR will pay out $0.64 to investors, compared to $1.58 in 2015.

That still leaves you with a 5.2% forward yield, but instead of getting cash in hand, you’re betting KKR can deliver by plowing the additional funds into more deals.

That’s far from a sure thing: consider the first quarter, in which KKR’s biggest investment, in payment-processor First Data (FDC), shed 19% of its value, accounting for more than half of the firm’s loss in economic net income (which reflects realized and unrealized investment gains).

Instead of reaching for yield with risky stocks like KKR, I urge you to take a closer look at another type of investment—closed-end funds. These oft-overlooked powerhouses deliver outsized yields that are the perfect antidote to the slow earnings—and dividend—growth that lies ahead.

Now Gundlach’s pounding the table on closed-end funds. And with the mountain of worries the markets face—from Brexit fallout to a potential President Trump—you owe it to yourself to see if they’re a good fit for your portfolio, too.

Plus they’re cheap, trading at 7% to 15% discounts to net asset value, so if you get in today, you can look forward to a nice gain as that gap narrows. Don’t wait. Go right here to get the full story and the names of these 3 dynamite income plays now.