“Why are they interviewing this guy? He doesn’t know… anything.”

I paused the Netflix pseudo-documentary and searched for a quick, thoughtful response to my wife. As the resident investment strategist of the house, my reputation was on the line.

“The dude made a lot of money on GameStop (GME). I think. Or he lost a lot. They’ll tell us at the end.”

Eat the Rich: The GameStop Saga is a fast, fun watch. You will remember the story:

We’re evoking the tale of GME today because we have a high-quality dividend stock that is currently:

In a washed out market that is poised to pop, this payer could fly.

As we get into the details, let’s highlight this dividend stock as part of a special trio that is sailing while 2022 is swooning: 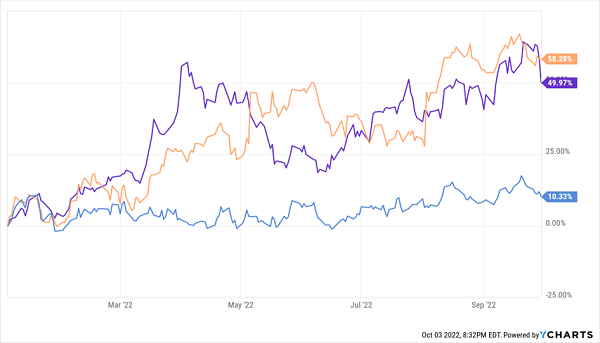 Here are the names, tickers and yields of these three star bear market students.

2022 hasn’t been kind toward the broader financial sector, though regional banks have generally absorbed less punishment than megabanks and other diversified financials. It makes sense—they do benefit from being able to charge higher interest rates on products, but they’re not weighed down by other businesses such as flailing trading desks.

But Heritage Financial (HFWA) has been particularly resilient, posting gains in the high single digits while the regional bank index has slumped by 15%.

Heritage Financial is the holding company responsible for Heritage Bank, a community bank with 50 locations in Washington state and Oregon. Fare is pretty typical: consumer products such as savings and checking accounts, credit cards and home loans; business lending; and wealth management solutions.

HFWA stands to be among the biggest beneficiaries of rising rates; loans have grown at a double-digit clip so far this year; and the bank boasts an extremely low-cost deposit base. KBW analysts also note that Heritage is bringing on additional talent to take advantage of market disruption in the Pacific Northwest.

Meanwhile, HFWA trades at an attractive 11.8 times earnings estimates—roughly in line with the financial sector and well cheaper than the S&P 500’s 16.2. The 3%-plus dividend yield is good, not great. But the dividend growth is where we want to see it—a roughly 10% clip over the past five years—and it frequently tops up its quarterly distribution with a small special dividend. 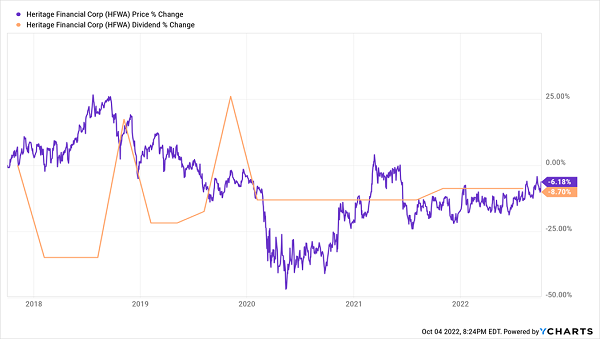 In February, I pointed out that insurer Unum Group (UNM) was being overlooked by the market.

That wasn’t the case for long.

Unum Has Completely Separated From the Insurance Pack 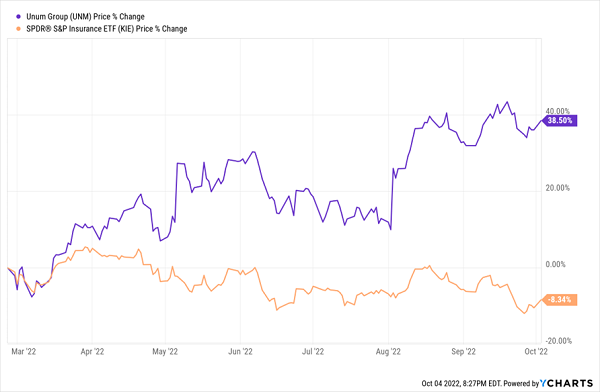 Admittedly, Unum is something of a specialist: It’s a top disability insurer in both the U.S. and the U.K., and it also provides life, critical illness and accident insurance.

The wind in Unum’s sails has been persistently high employment and rising wages, which have organically improved the company’s premiums. Lower benefit ratios have also helped profit growth. As a result, UNM has managed to scorch operational estimates this year, sending shares to market-obliterating returns.

UNM has rewarded investors with a 10% dividend hike this year, soundly above its 7.5% five-year CAGR, so it still yields roughly twice the S&P despite its blistering run.

The price is great, too, but it’s fair to ask whether UNM is a value, or just cheap. Shares trade hands at a dirt-cheap 6.3 times earnings estimates—extremely uninspiring earnings estimates. While Unum should close 2022 out with a 41% jump in profits, expectations for 2023’s bottom line are virtually flat year-over-year.

Multiple expansion could still do some heavy lifting, but meaningful growth might be asking too much.

Now, Cal-Maine Foods (CALM) is exactly the kind of company you’d expect to see flying high in this kind of environment. It’s a consumer staples play—an egg farmer that’s responsible for about a quarter of the eggs Americans consume.

While there are a lot of things in the kitchen you can substitute or go without when things get tight, eggs aren’t really one of those—demand tends to stay constant regardless of what prices do.

And in 2022, prices have been going through the roof.

Inflation has done its fair share of damage, sure. But a severe outbreak of avian influenza killed millions of hens this year, throwing a monkey wrench into production.

Higher egg prices have meant higher stock prices for CALM shares, which have raced ahead by nearly 50% so far this year. And despite that run, the stock still has a little valuation appeal, sporting a forward P/E of 15.9 versus the market’s 16.2.

Another less expected source of potential returns? As discussed, a short squeeze! CALM’s brisk chart run has much of Wall Street betting against the egg producer; more than 13% of Cal-Maine’s shares outstanding are currently sold short—typically, anything over 10% is worth watching.

Defensive? Yes. A potential short-squeeze candidate? Yes. But a long-term income play? Not so much. CALM has a variable dividend—so variable, in fact, that the company pays out zero cash in some quarters. 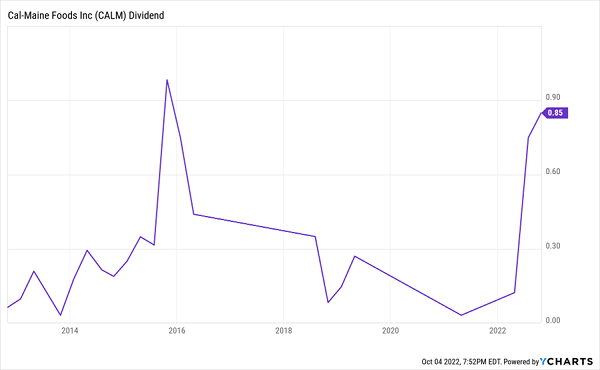 How to Lock Up $76K in Annual Income

Any inconsistency in the payout is a red flag for retirement income seekers, but this much variance is an automatic DQ.

When you build a dividend portfolio, you definitely want high-quality companies like Cal-Maine—but you also need high and durable levels of income.

As I write, the stellar stocks and funds in my Contrarian Income Report portfolio yield an average of 7.6%. Translated into real-world dollars: This baker’s dozen is spinning off $76,000 in cash, year in and year out, for every million bucks invested. 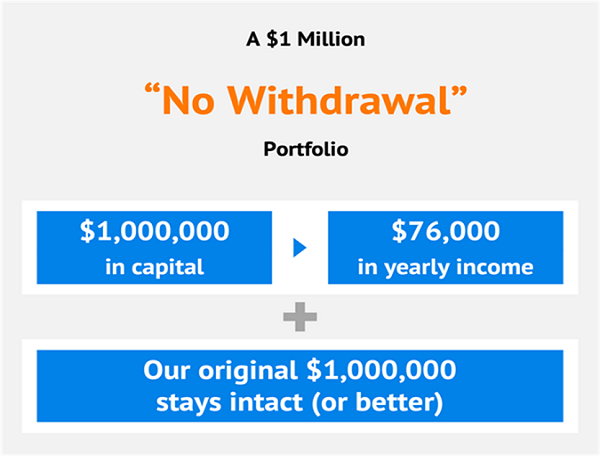 In a word, that level of income is freedom:

Those are exceptional levels of income.

The important thing is that these yields are safe, which creates stability for the stock (and fund) prices attached to them. We want our income, with our principal intact. It’s really the only way to retire comfortably without having to stare at stock tickers all day, every day.

Best of all, many of my favorite dividends are paid monthly. So, we’re talking about $3,000+ in dividends every month on that $500K. Or $6,000+ per month in income on the seven-figure accounts that Fidelity brags about in its ads.