I love nothing more than bargain real estate – especially if I can buy it with a single-click of my mouse (or one tap from my smartphone).

REITs (real estate investment trusts) are as cheap as they’ve been this decade. Prices are low, and yields are high – making this an ideal time to buy.

Unless, of course, their tenants are watching their own business models vanish before their very eyes. If clients can’t pay the rent, then their REIT landlords won’t be able to pay us our dividends.

And if we’re not banking dividends from REITs, then what’s the point? Here are three REITs that appear “pointless” to own right now:

Urstadt Biddle Properties (UBA) is a primarily retail-focused REIT – with tenants such as Party City (PRTY), Aldi and Starbucks (SBUX) – that operates across New York, New Jersey, New Hampshire and Connecticut. It also has a little exposure to office space and storage, but that slight amount of diversification hasn’t been enough to shield it from the malaise currently affecting its industry.

Back in November, I pointed out Urstadt Biddle as one of nine REITs that were slated to increase dividends sometime in December. Sure enough, UBA pulled through with a 9.1% hike to 24 cents per share, good for a 24th consecutive year of higher payouts.

The company also had a lousy quarter on the operational front, with funds from operation plunging from 36 cents per class A share in the year-ago period to just 21 cents. That sent full-year FFO down from $1.25 per share to $1.15.

So despite the fact that that UBA is trading at levels last seen in 2015, it’s still going for roughly 16 times FFO. That hardly screams “value.” It’s just cheap.

GGP Inc. (GGP) is a particularly alluring choice at the moment not just because of its far-higher-than-normal yield, but also the still-existent possibility of a buyout pop.

GGP is a high-end retail real estate operator whose 125 property portfolio across 40 states includes a host of malls, but notably even some property on New York’s Fifth Avenue. The REIT’s tenants include the likes of Cartier, Prada and Versace, so it’s not as if Amazon (AMZN) is necessarily banging at the door like it is for some of Urstadt’s tenants. But GGP, swanky clientele and all, has been struggling nonetheless.

The stock is off nearly 35% from its mid-2016 peak as the company’s funds from operations have essentially flat-lined. Now, GGP’s dividend, at 88 cents per share annually, still is only 56% of its 2017 FFO ($1.57 per share). But the simple fact is that while the nominal dividend and its yield have been shooting higher, that hasn’t come on any extra ability to actually fund the payout.

GGP’s Dividend Isn’t in Danger, But Watch This Trend 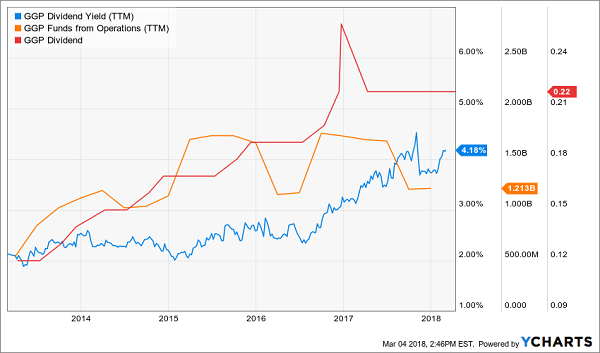 There is a wild card: Back in November, Brookfield Property Partners LP (BPY) bid $14.8 billion, or about $23 per share, for the remaining 66% of GGP it didn’t already own. That bid represented a roughly 21% premium from the $19 per share GGP was trading around the time Brookfield and GGP reportedly were negotiating. Shares naturally popped.

But GGP rejected the bid in December. Investors initially kept the REIT’s shares aloft, believing an increased bid was looming. However, it has been months, and while Brookfield’s original bid reportedly still is on the table, every day that goes by hints more strongly to the likelihood that a white knight isn’t coming.

That means investors are left holding onto a low-growth prospect with a mediocre yield – one that still has a little buyout premium to work off.

This next sell call comes as a particular disappointment to me. While I hadn’t yet built enough conviction to add EPR Properties (EPR) to my own portfolios, I have previously touted its prospects as a one-of-a-kind REIT.

EPR Properties is a multi-industry REIT whose portfolio is diversified across entertainment (theaters, family entertainment centers), recreation (ski areas, iFly indoor skydiving and TopGolf driving ranges) and education (public charter and private schools, and early education centers). There are scores of mall REITs, office REITs, residential REITs and healthcare REITs, but no other real estate investment trust has its fingers in so many niche trends in the seemingly right places.

But EPR’s story is changing, and not for the better.

The REIT recently reported 2017 numbers that were just fine, with revenue up 17% year-over-year and adjusted FFO growing 4%. However, 2018 estimates were shockingly bad, with the company lowering adjusted FFO guidance 10 cents per share to $5.33-$5.48. That’s in part affected by Children’s Learning Adventure, an EPR tenant that has filed for bankruptcy protection.

EPR also hacked away at its investment forecast, which was $700 million-$800 million but now stands at $400 million to $700 million. KeyBanc’s Craig Mailman downgraded the stock to the hold-equivalent “Sector Weight,” saying those figures, as well as a higher disposition forecast, implied no net investment for the current yield.

This REIT now trades for about roughly 10 times projected 2018 adjusted FFO, which should cover its expected $4.32 in annual dividends (an increase over 2017) with plenty of room to spare. However, the growth story has been thrown into complete disarray for the time being, and additional upward interest-rate pressure could really tighten the screws.

This may be a buy once again in the future, but for now, avoid EPR.

Rather than scrape the barrel for distressed moonshots like EPR Properties, seek out quality instead. The seven REITs in my 8% No Withdrawal Portfolio check both boxes for “dividend growth” and “high current yield” – two must-have traits for rising-rate environments.