Double the Market With This 3-Stock “Cash Back” Portfolio

The market’s historic bull run just hit a brick wall … and I couldn’t be more excited.

I’ve had my eye on three robust dividend growers for months. And thanks to this pullback, they finally trade at attractive prices (and pay a blended 6.5% yield!)

February saw the S&P 500 decline for the first time since October 2016 – the month before Donald Trump was elected president. The index dipped 3.9% as every last sector dipped into the red. And with a little shove at the start of March, stocks have lost just about all their gains in 2018.

Stocks are Effectively Flat for 2018 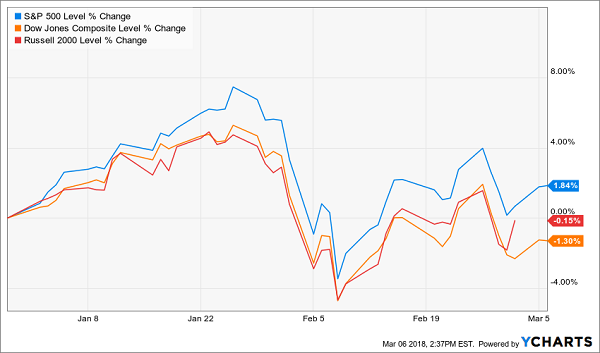 Compared to the past year-plus, it feels like blood in the streets, sidewalks and gutters. It’s not, of course, in the scheme of things. But there’s just enough spilt plasma that investors should let out their inner Rothschild and look for fresh buy targets.

I’ve got my eye on three prizes right now – a set of picks that not only collectively yield a plump average of 6.5%, but also have enough kindling that they should catch fire when the market returns to its long-term uptrend.

And this bull market isn’t over yet. Here are a few reasons why:

The market isn’t without its short-term problems, but these data points – not to mention the still-unrealized potential of Republican tax cuts – still have the table set for a boffo 2018. And investors can position themselves for the coming bull resurgence by positioning themselves in “dual threat” plays that deliver 6.5% dividends with double-digit price upside to boot. Here are three candidates I’ve identified.

But I think the company may have gotten things right the second time around.

The provider launched the Global X U.S. Preferred ETF (PFFD) in September 2017, and in doing so, they nailed two things:

With a yield of 6%, PFFD is competitive with similar ETF offerings. Hopefully it will perform better than its preferred predecessors! As I’ve written before, it’s usually a good idea to pay more in fees for the human manager to cherry pick the best preferred shares. We shall see if it is “different this time” with PFFD.

Turning to something with more substantial yield right here and now, Ventas (VTR) is one of the premier real estate investment trusts (REITs) in the healthcare space, boasting properties such as medical office buildings, senior housing communities and life science centers. As a result, the company is naturally buoyed by a constant uptick in healthcare spending, as well as a deluge of Baby Boomers reaching Medicare eligibility.

Ventas recently reported a rock-solid 2017 that included growth in funds from operations to $4.16 per share, as well as record cash flow from operations and same-store property cash NOI “at the high end of our expectations,” according to the company. Most impressively, same-store cash NOI growth for the triple-net portion of its portfolio grew 3.7% to beat Ventas’ own guidance.

While VTR did forecast lower FFO for 2018, that’s largely because of several initiatives the company plans to implement, including growth strategies and strengthening the balance sheet by paying off more debt. The REIT also doled out a small dividend increase, as we expected, to 79 cents quarterly. The next distribution will be paid out April 2.

Ventas’ (VTR) Growth Is Maturing, But Not Disappearing 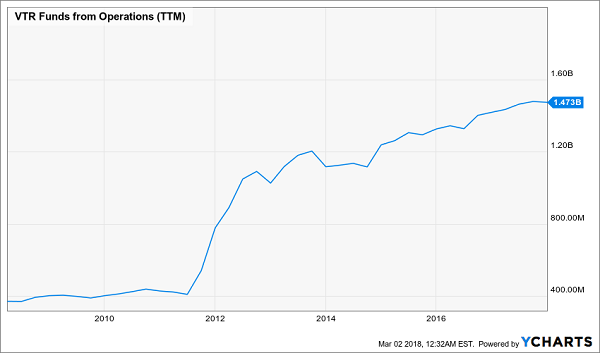 The market’s “other Apple,” Apple Hospitality REIT (APLE) is a large upscale, select-service hotel REIT whose portfolio consists of 241 hotels across 34 states under the Hilton (HLT) and Marriott (MAR) brands. This is a great play for the “experience economy,” and it’s also a conservative monthly dividend payer that doled out less than 70% of its modified funds from operations as distributions in 2017.

It’s also a fantastic yield opportunity at the moment.

REITs have had a lousy 2018, with the Vanguard REIT ETF (VNQ) off a miserable 12% across just two months of the year. Hospitality REITs have really taken it on the chin, however. If you have five minutes to play with, do a quick Google search of a few hotel-related REITs, and you’ll see scores of recent headlines declaring that these stocks have become technically oversold of late.

APLE is in the same territory, though its 12% loss matches the VNQ and looks far more resilient compared to some of its peers. The REIT’s fourth-quarter and full-year results also looked better than many of the shoddy reports throughout the industry, with FFO down just 1% year-over-year and adjusted EBITDA actually up 16%. Moreover, the company projects more EBITDA growth ahead (it does not guide FFO), and a slew of acquisitions in 2017 puts Apple in prime position to punch back in 2018.

APLE trades at less than 10 times earnings and boasts its highest yield since its 2015 IPO. Those are tempting reasons to bite into this Apple. (Sorry.) 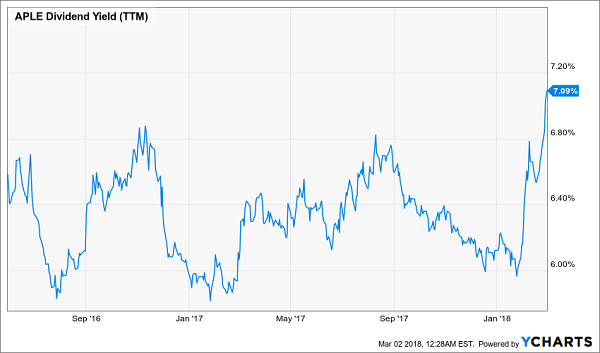 All seven REITs in my 8% No Withdrawal Portfolio check both boxes for “dividend growth” and “high current yield” – a must-have for rising-rate environments.