9 REITs Ready to Raise Their Payouts This December

“First-level” investors – those who buy and sell on headlines – mistakenly believe that real estate investment trust (REIT) profits will suffer if rates rise.

They’re wrong. And today, we’ll highlight nine REITs that are “raising their rents” as rates rise. As their tenants pay more, these firms will in turn pay their shareholders more in dividends.

Sure, in the short run, the “rates up, REITs down” theory puts on quite the show. When the 10-Year Treasury’s yield rises, REITs usually fall. And when its yield drops, REITs usually rally. This inverse relationship tends to hold up over multiple days, weeks and even months: 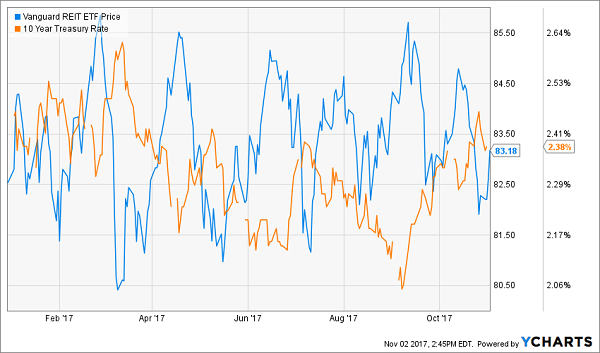 For example, let’s look at a three-year period starting in May 2003 when the 10-year rate climbed two full basis points – from 3.2% to 5.2%. Based on recent REIT price action, you’d expect most firms would be out of business!

But blue chips such as mall operator Simon Property Group (SPG) and self-storage stalwart Public Storage (PSA) not only survived the rate increases – they thrived:

The Best REITs Climbed With Rates 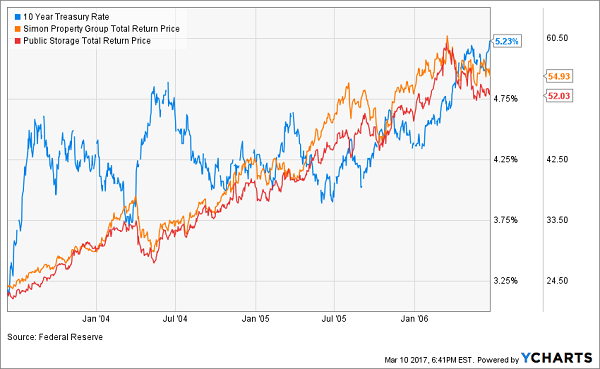 Why? Because rising rates signaled a booming economy – one in which these firms had no problem raising their rents. Both boosted dividends while investors in each stock enjoyed 129% total returns over the three-year period!

9 REITs That Will Thrive This Rate Hike Cycle

Firms having no problem issuing rent increases today are easy to spot. They report higher and higher funds from operations (FFO) year after year, which finds its way back to shareholders in the form of an ever-rising dividend.

Here are 9 REITs likely to boost their dividends this December:

Office and apartment property owner Douglas Emmett (DEI) is much like 3M in that it typically doesn’t sport a high yield no matter how much it raises its payout – but that’s mostly because the company’s shares tend to follow the dividend higher.

Douglas Emmett is a REIT that manages to be diverse and targeted at the same time, investing in both Class A office space as well as apartment communities … but only doing so in Los Angeles and Honolulu. The lure? “Small, affluent tenants, whose rent can be a small portion of their revenues and thus not the paramount factor in their leasing decision.” In short, no one’s going to sweat premium pricing.

Shareholders hope DEI will double up on its 10% year-to-date performance with a year-end hike to the dividend. Douglas Emmett typically announces its increase early on in the month, and if it’s anything like the past few years, it should be a lift of a penny per share.

Douglas Emmett’s (DEI) Stock Is Racing Against Its Payout 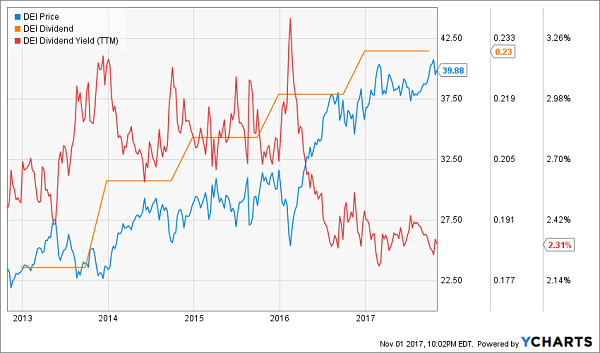 S&P 500 component Ventas (VTR) is a diversified healthcare REIT that operates primarily in senior housing communities, with 669 such facilities. But its portfolio also includes 359 medical office buildings, 26 life science and innovation centers, 30 skilled nursing facilities and a few other properties. It’s also geographically diversified, owning properties not just in the U.S., but also in Canada and the United Kingdom.

This year has been a disappointing one for VTR shareholders, who saw their holdings join the market rally through late June, with nearly 15% gains – but most of that advance has been peeled away, leaving a return in the low single digits. The lackluster performance comes despite another strong year of fundamentals, including 9% growth in income from operations.

Still, Ventas should be good for some December cheer, with the REIT likely to increase its payout early in the final month of the year. Considering the company is only paying out 74% of funds from operations as dividends this year, VTR has plenty of room to work with.

A pattern you don’t often see – but that you should relish when you get the chance – is when a company’s dividend growth accelerates over time. Much more often than not, corporate boards will start to cap their payout hikes as the dividend becomes an increasingly large percentage of their earnings and cash flow. But when a company has a few breakout years, management can take the governor off the payout.

That’s the case with Mid-America Apartment Communities (MAA), an apartment-focused REIT that primarily operates in the southern and southeastern United States, as well as around the District of Columbia. While the REIT isn’t growing its dividend by leaps and bounds, the rate of growth has picked up pace over the past few years.

Another strong year could mean a more significant boost in the payout. Look for the company’s next dividend increase very early in December. 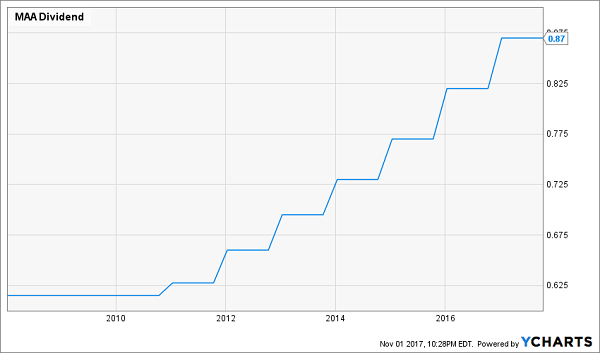 Universal Health Realty Income Trust (UHT), as the name implies, specializes in healthcare-related facilities – medical office buildings make up 76% of its properties, with another 15% in acute care hospitals and the rest peppered among several other types.

The REIT is having a good but not great 2017, up about 12% year-to-date, with net income and funds from operations creeping up year-over-year. That should result in a continuation of its modest and irregular dividend increase schedule. UHT typically offers up two distribution hikes every year – one announced in June, and another traditionally offered up in the first few days of December.

Self-storage REITs such as CubeSmart (CUBE) have had a rough time since 2016 as sky-high valuations finally caught up with the industry, resulting in a year-plus selloff. However, this group is starting to get its mojo again, and CUBE is waving the banner with a 12% gain over the past three months.

Coming up next? A dividend increase – one that should be announced sometime mid-month. And given outstanding payout growth of 145% over the past five years, investors can expect more than just a token step up.

CubeSmart (CUBE) Gets Into the Giving Season 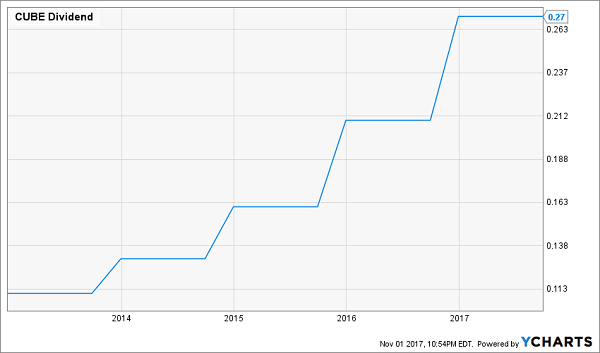 Urstadt Biddle Properties (UBA) has been a lot more fun to say than it has been to own in 2017, with shares off about 10%. You shouldn’t need many chances to guess what type of properties it owns.

Yes, Urstadt Biddle is a retail REIT – one that owns shopping centers primarily outside New York City. To its credit, it has actually been growing in key metrics such as FFO this year, but occupancy has been a trouble spot, dipping every quarter so far in 2017.

A little relief is likely coming in the middle of December, when the company should dole out a small improvement to its quarterly payout.

Hannon Armstrong (HASI) isn’t your garden-variety REIT, but considering that has resulted in returns that are far from garden-variety … I’m sure no one minds.

HASI invests in sustainable infrastructure – things like solar and wind farms. But it also helps make buildings more energy-efficient by making improvements to things such as air conditioning systems and insulation.

This is an under-the-radar growth dynamo that more than tripled its revenues between 2013 and 2016. Shares have mostly followed suit, jumping 115% since its first day of trading in 2013.

The dividend? Well, there’s clearly not much history there given its IPO was just a few years ago, but its 33-cent payout is 50% better than it was in its first full year of distributions. Another hike should come sometime in mid-December.

Hannon Armstrong (HASI) Is Heading Up, Up, Up! 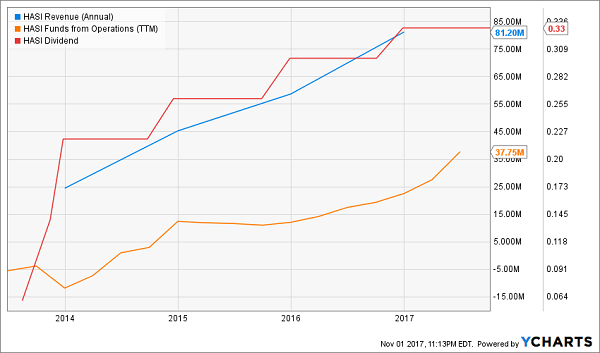 W.P. Carey (WPC) isn’t exclusively a wintertime dividend-raiser – it has something extra to offer investors every season. That’s right: Since 2001, every single quarterly payout from this REIT has been larger than the last.

So, what does it do?

WPC leases out business space to individual tenants under triple-net lease agreements – instead of paying things like property taxes and building insurance, it pushes those responsibilities on tenants in exchange for more predictable and cheaper rents. And W.P. Carey is pretty diversified across its 895 properties, with its largest industry type (retail) only making up 17% of the portfolio, and a wide range of other properties including automotive (8%), construction (5%) and warehouses (2%).

WPC has increased its payout for 18 consecutive years, and should make it 19 sometime in the middle of the month.

Spirit Realty Capital (SRC) is another triple-net lease REIT, but as the 23% year-to-date losses might indicate, it’s one that’s positioned smack-dab in the middle of the reeling retail industry.

Spirit Realty also leases out to single tenants – 431 of them at the moment, in fact – across 49 states. Its tenants include the likes of Walgreens (WBA), AMC Entertainment (AMC) theaters and Church’s Chicken franchisor Cajun Global LLC.

SRC shares took a massive hit in May after reporting an “abnormally high credit loss” and downgrading its adjusted funds from operations guidance from 89-91 cents per share to 80-84 cents. Moreover, the company in August announced plans for a spinoff of certain assets, including properties leased to retailer Shopko, to be completed sometime in the first half of 2018. So there’s a lot of noise surrounding this REIT.

However, Spirit Realty still should deliver a little extra oomph to its payout in December … likely a couple weeks into the month. That’ll only help fatten an already juicy yield of nearly 9%.

One of my top REIT buys right now recently raised its dividend again by 4% over last quarter’s payout. This marks the 21st consecutive quarterly dividend hike for the firm: 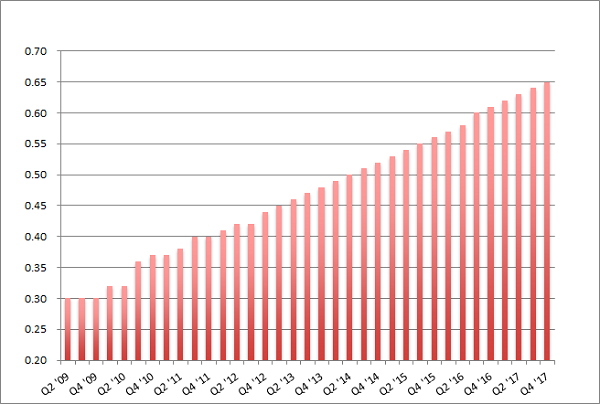 It pays an 8.1% yield today – but that’s actually an 8.5% forward yield when you consider we’re going to see four more dividend increases over the next year. And the stock is trading for less than 10-times funds from operations (FFO). Pretty cheap.

Same for another REIT favorite of mine, a 7.6% payer backed by an unstoppable demographic trend that will deliver growing dividends for the next 30 years. 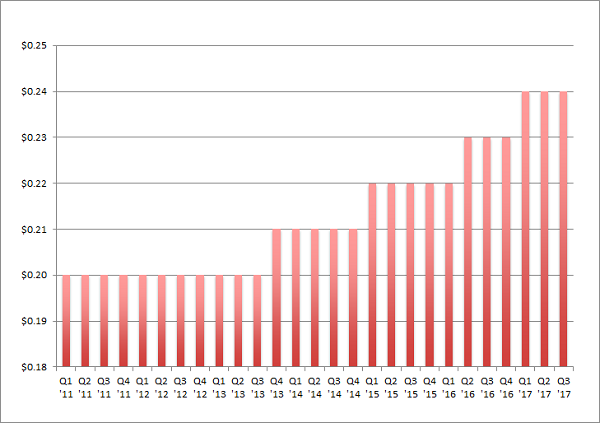 But I would like to send you a free copy of my latest special report, Recession Proof REITs: 2 Plays With 7.6%+ Yields and 25% Upside, with all the details.