5 REITs That Are Just Right for Retirement

Real estate investment trusts (REITs) are a must-have holding for any and all retirement accounts. The five REITs I’m about to show you are pivotal to both growing your nest egg, then delivering consistent cash to pay the bills once you’ve called it a career.

Slowly but surely, market research is starting to agree with me.

Wilshire Research delivered a report around this time last year summing up its research into REITs’ effect in retirement portfolios. The results were “dramatic.”

“One of the key findings was that the addition of stock exchange-listed REITs to retirement portfolios would have allowed a higher level of stable income for any given level of risk tolerance.”

One part of the study compared income-focused portfolios that excluded REITs with those that included them. Wilshire’s finding?

To put this in perspective, over a 30 year retirement horizon, increasing average annual total return by 15 basis points would increase the ending portfolio balance by 4.4 percent.”

When you’re talking about hundreds of thousands of dollars, 4.4% isn’t anything to sneeze at. And again, these numbers help hammer home the message I’ve given investors for years: REITs are your ally in retirement.

These five REITs are particularly attractive targets, as their businesses should deliver both income and growth for decades down the road:

The retail world is rapidly morphing before our eyes, turning away from the traditional brick-and-mortar model, and toward an ever-quicker home delivery method, a la Amazon (AMZN), where the mere push of a “button” sends paper towels or soda to your home.

What’s unlikely to change this year, next year or even over the next century is the need for warehouses and other delivery infrastructure … and that’s good news for ProLogis (PLD).

ProLogis is, by its own boasting, the “biggest provider of industrial warehouse and distribution facilities in the Americas,” though it also has a top-tier presence in Europe, and it’s expanding its reach into Asia, including 19 markets in China. All told, the company boasts 684 million square feet of logistics-related real estate in 3,319 buildings spanning 19 countries on four continents. Customers run the gamut, too, from automakers such as BMW, delivery services like FedEx (FDX) and UPS (UPS), not to mention retailers such as Walmart (WMT) and the aforementioned Amazon.

Make no mistake: Prologis is a growth story, with revenues exploding by 45% over the past three years, and income nearly quadrupling over the same time frame. ProLogis’ spending on investors has grown, too, by 33% over the same period to a current dividend of 44 cents. That’s a conservative but extremely safe payment, with the annualized payout of $1.76 well below the company’s 2017 core funds from operations (FFO) guidance for $2.79 per $2.81.

ProLogis (PLD) Is Optimized for Growth 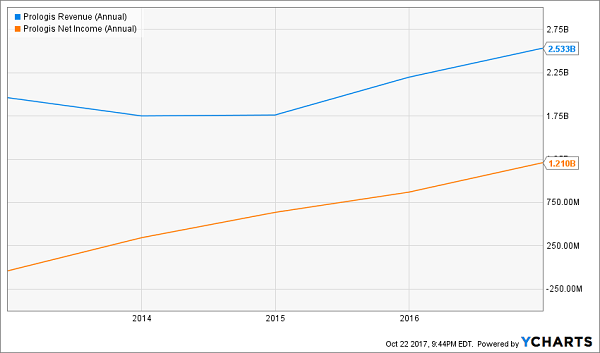 Another trend that (unfortunately) isn’t going anywhere is the need for housing that caters to the lower and lower-middle classes. While it’d be nice to imagine a world in which everyone has access to luxury apartments and McMansions, the reality is many people have to get by on more modest means.

UMH Properties is one of a handful of publicly traded companies specializing in manufactured-home communities. At the moment, UMH boasts 19,400 homesites across 107 manufactured home communities, as well as 810 acres of land on the backburner that the company can use to develop new sites. But this REIT doesn’t make money off just the property – it also sells manufactured homes.

UMH boosts the appeal for these communities by offering several neighborhood amenities, including swimming pools, fitness centers, playgrounds and even storage facilities.

The company has grown its top line by nearly 17% annually since 2013, and in a very steady manner. FFO growth is outstanding, too. Core funds from operations exploded by 35% in 2016, to 74 cents per share – 2 cents more than it paid out in dividends. This is an important step for UMH, which had a 130% FFO payout ratio just a year prior. 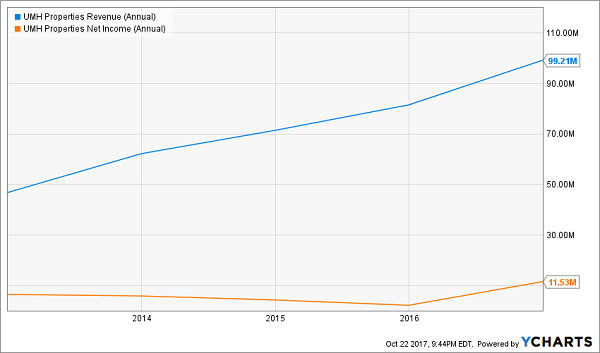 Self-storage REITs such as CubeSmart (CUBE) are off significantly since 2016 – the kinds of declines that can make investor start to wonder whether these stocks are on their way out.

Names such as CubeSmart, Public Storage (PSA) and Extra Space Storage (EXR) ran up for years unchecked as Wall Street became increasingly enamored with their all-weather thesis. Specifically, self-storage is useful in good economies as Americans buy more things but don’t have enough room to keep it, as well as during economic downturns when people find themselves downsizing their homes, and suddenly needing additional space to keep all their possessions.

But self-storage companies were a victim of their own success, and eventually their valuations didn’t reflect reality … and the industry corrected.

These REITs are a buy again, however, and CubeSmart looks particularly attractive. It’s a big fish in an extremely crowded pond, where consolidation will continue to be the future. Right now, CubeSmart is the industry’s fourth-largest player, but there’s plenty of market share to gobble up considering the 10 largest operators collectively own just 16% of all rentable square footage.

CUBE continues to grow like a weed, with 2016’s revenues up 15% year-over-year. The company also keeps tossing cash at shareholders, with the current 27-cent payout of 27 cents more than double 2014 levels – and CubeSmart should raise its dividend again sometime before the end of this year. Better still, CUBE is a responsible payer, doling out just 72% of its FFO as dividends through the first two quarters of the year.

CubeSmart’s (CUBE) Shares Took a Break, But Its Business Didn’t 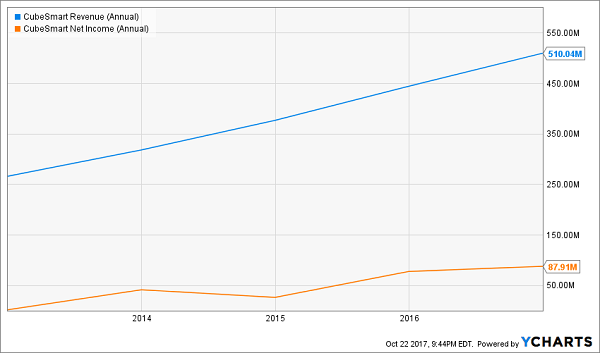 One, the business. I’m high on the “experience economy” – where Americans are putting more of their money into experiences, whether it’s skiing, seeing movies, going to theme parks or just traveling to relaxing locales. Sunstone – and most other hotel REITs – plays to that theme, holding interests in more than 13,000 rooms across 27 mostly upper-upscale hotels under the Hilton (HLT), Hyatt (H) and Marriott (MAR) banners.

Two, the dividend. I know the headline yield leaves a lot to be desired, but that’s because Sunstone utilizes a fiscally sound practice of doling out an easily achievable quarterly dividend, then unloading a special dividend on investors at the end of each year. To give you an example of just how conservative this practice is, Sunstone’s second-quarter FFO of 38 cents is enough to cover the company’s nickel quarterly payout for the whole year – and then some.

Admittedly, SHO isn’t appropriate for investors who need every last investment to throw off the highest possible amount of quarterly income. But considering that, when special dividends are included, Sunstone Hotel Investors throws off yields anywhere between 5% and 8% annually, depending on the year, this is a great holding for building total returns over time. 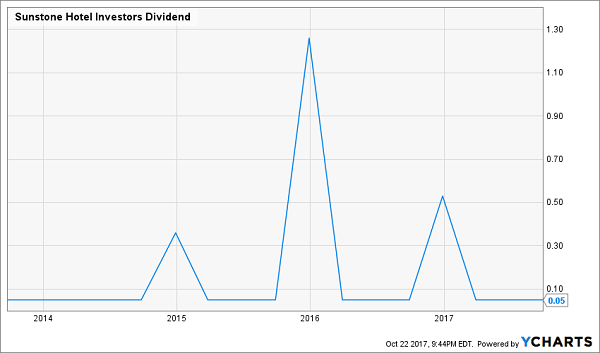 Pebblebrook Hotel Trust (PEB) is a criss-cross of two of the trends lifting stocks in this article – the rise of the experience economy, as well as a growing divide between the lower economic class (driving people to UMH) and the upper class, which stuffs Pebblebrook’s pockets. 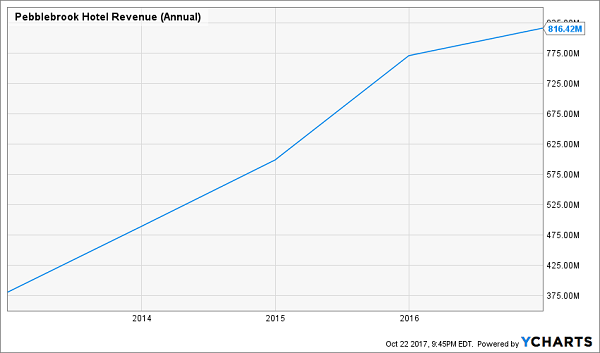 Shares are in the midst of a multiyear rebound after 2015 delivered a gut punch to the broader hotel REIT industry. While the company still is feeling the effects of redevelopment disruption in San Francisco and property sales from 2016 affecting comparisons, Pebblebrook is making gains in RevPAR (an important hotel operational metric) and recently increased its share buyback authorization.

Long-term, Pebblebrook is ideally situated to serve the increasingly wealthy elite – an enviable position, and a profitable one, too.

If this list of REITs has one weakness, it’s overall yield. These picks top out at 5%, and while dividend growth will help out over the years, the ultimate retirement stocks are going to deliver higher payouts and a high current yield – just like two of my most-loved REITs.

My favorite REIT today recently raised its dividend again by 4% over last quarter’s payout. This marks the 21st consecutive quarterly dividend hike for the firm: 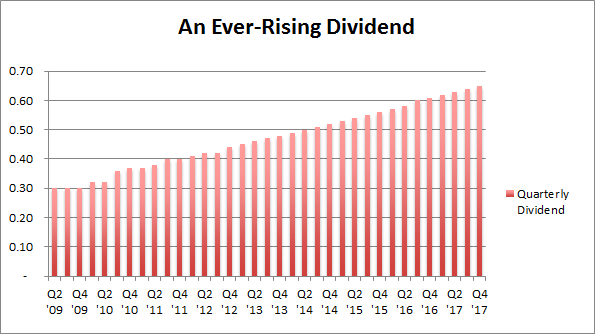 It pays an 8.2% yield today – but that’s actually an 8.4% forward yield when you consider we’re going to see four more dividend increases over the next year. And the stock is trading for less than 10-times funds from operations (FFO). Pretty cheap.

However, I expect its valuation and stock price will rise by 20% over the next 12 months as more money comes stampeding into its REIT sector – which makes right now the best time to buy and secure an 8.4% forward yield. 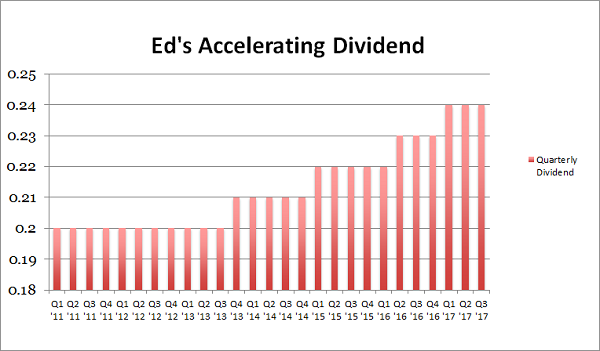 Remember, there’s never been a better time to buy REITs and live off their dividends. But it’s important to choose wisely. Retail REITs are dangerous, while other recession-proof issues are bargains. I’d love to share the latter with you – including specific stock names, tickers and buy prices. Click here and I’ll send my full 8% No Withdrawal Portfolio research you to right now.