5 CEFs With 6%+ Yields and Big Upside (buy before January)

There’s a storm brewing for closed-end funds, but it’ll be over by Christmas. And with a quick hand, you and I can profit from it.

More on that—and 5 CEFs that should be on your post-selloff buy list—in a moment.

First, I should tell you that the storm front I see coming stems from nothing more than the calendar on your wall (or more likely on your phone): the looming year-end, which often trips up CEFs (and other funds, as well as stocks). That’s because many investors sell at the end of the year to try to secure a lower tax burden when filing their taxes next year.

It’s called “tax-loss harvesting” and it’s a pretty common technique. This selling pressure tends to cause a short-term dip in prices—and that dip gets magnified because first-level investors see it and think they should be selling, too!

As you can guess, this selling wave isn’t a big deal—and gives us a nice window to snap up some bargains, because the start of the next year usually finds investors buying back in. Some will even start doing so before the current year is over.

We’re already seeing the sell orders roll in: of the 500 or so CEFs I track through my CEF Insider service, 346 have gone down in the last month, but only 45 funds have gone down since the start of the year. And there’s likely more selling ahead—in keeping with the customary pattern.

But it’s important to remember that no matter what’s going on with CEFs as a whole, each fund has its own story: some are great and will bounce back fast, while others will take forever to recover—if they ever do.

Let’s look at some laggards now.

In the past month, we’ve seen a lot of funds collapse in price (including the ones I warned about in my recent special report, “5 Toxic CEFs That Could Ruin Your Retirement”):

The worst offender in the overall CEF space slid 15% in a month! 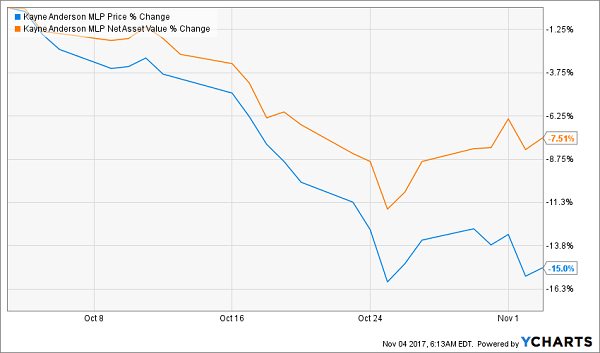 That distinction goes to the Kayne Anderson MLP Fund (KYN). But I don’t blame the fund’s managers, Kayne Anderson, who typically do a good job. The reality is that MLPs are suffering on their own, with the Alerian MLP ETF (AMLP) down 5% in the last month. And note that KYN’s net asset value (NAV, or the value of its underlying holdings) is down just 7.5%—half of its price decline.

What’s really going on here is a massive MLP selloff before the end of the year—and that’s exacerbating the current weakness in MLPs more broadly.

So KYN is a victim of the selloff—but there are plenty of other funds that deserve more blame for their decline.

As much as I love Mario Gabelli, one of the best value investors on Wall Street, he’s been bungling his closed-end funds. There’s no better example than the Gabelli Multimedia Trust (GGT), which is down over 9% in the last month: 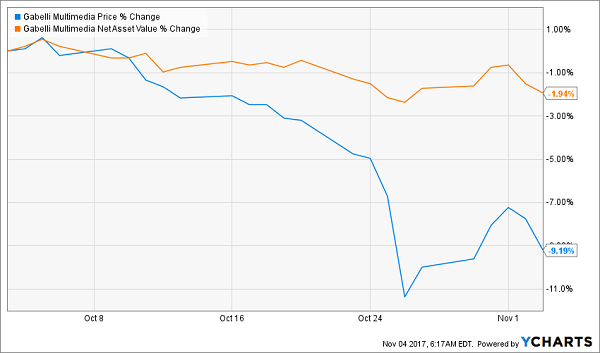 To be fair, its NAV is only down 1.9% over the same period—but that’s unacceptable. The fund’s mandate is to invest in “global telecommunications, media, publishing and entertainment industries.” In other words, companies like Netflix (NFLX), Amazon (AMZN) and Facebook (FB).

How’d those stocks do in the last month? Pretty well! 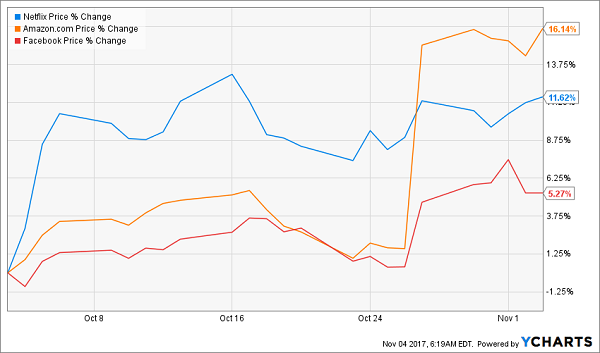 So why isn’t GGT going up?

How have those stocks done lately? 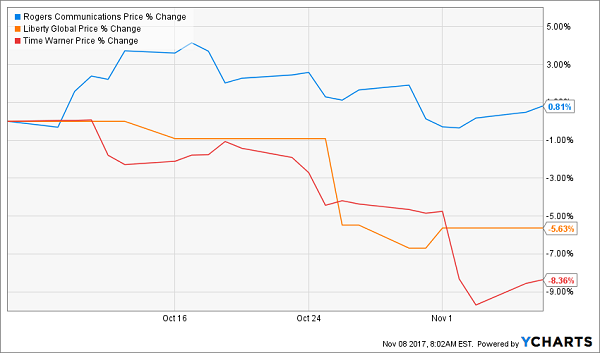 This fund’s strategy simply isn’t working. Until that changes, its steep price decline is more than justified—and I’ll be steering clear.

So what we’re seeing now in CEF land is a lot of investors noticing the selloffs at GGT, KYN and other funds and assuming this is the start of a wider trend. But as I mentioned earlier, each fund has its own story—and many CEFs have great tales to tell, ending with big future gains!

Is it too early to start talking about what will win in 2018?

A couple things are clear for the next year: higher interest rates from the Federal Reserve, stronger GDP growth for the country and fewer debt defaults in the business world.

We know the first one because the Fed has been repeating it, over and over, for months. And with corporate profits rising, incomes getting bigger and unemployment falling, there’s little excuse for not raising interest rates.

As for GDP growth, again, all signs point to positive figures. Higher incomes and greater consumer spending mean America’s economic pie is getting bigger. Did you know that earnings were up nearly 14% for the first half of 2017, while disposable income is up 3.6% from a year ago? It’s inevitable that higher incomes, greater corporate profits and more discretionary spending from consumers will boost the country’s financial health.

Which brings us to debt. Corporate defaults have been declining throughout 2017, with the riskiest corporate bond defaults falling 23% from a year ago. Fewer companies are struggling to make ends meet (remember the employed, higher-earning Americans driving earnings higher?), and that means bonds are getting more attractive for income investors.

So what do we do?

Obviously we want to buy the best corporate-bond funds we can find when they get oversold, but we also want to check out overlooked areas like preferred stocks, which often yield 6%+ while offering big capital gains when they’re bought at the right time. Fortunately, there are plenty of preferred-stock funds with great track records, like these:

Preferred Stocks: At the Front of the Line 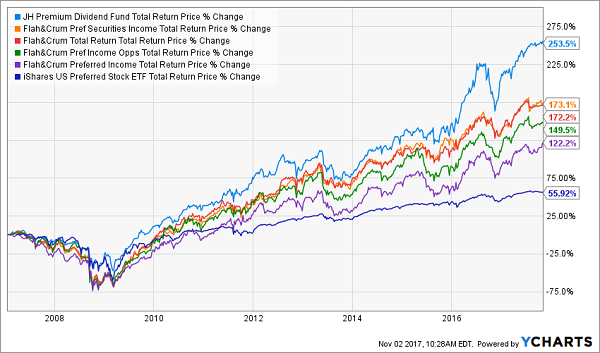 Notice how they’re all crushing the passive iShares US Preferred Stock ETF (PFF)? Me too.

Fortunately, these funds’ killer run is going to get better in 2018, since preferreds haven’t gotten as much attention as their corporate-bond brothers or common-stock cousins. We all know corporate bonds and common stocks have priced in a lot of next year’s growth, which is why I like preferreds a lot for 2018—and you should, too.

I’ve just rushed out an urgent update of that Special Report I mentioned earlier—“5 Toxic CEFs That Could Ruin Your Retirement”—and I want to give you a copy now.

This is important research if you want to escape weak performers in the “new” CEF world we’ll see right after the selloff. Because the last thing you want is to be holding these 5 dogs—particularly when far better CEFs rip higher after the selloff subsides in January.

Don’t wait. Eliminate  these dividend traps from your portfolio—or steer clear of them if you don’t already own them—by grabbing your copy of “5 Toxic CEFs that Could Ruin Your Retirement.”

Here’s the trouble with these 5 CEFs: they look attractive—with eye-popping yields and BIG discounts to NAV. But buying them means “putting yourself right in the path of pitfalls like these:

Any of these traps would rack up huge losses in any investor’s portfolio—but it’s even worse when you factor in the big gains I forecast for CEFs as a whole in 2018.

This Special Report is yours FREE when you click right here. Don’t take chances with your hard-earned cash. Grab your copy now.