Imagine you’re sitting in a bar and a guy sits down next to you and says, “I just took out a $6-million loan.”

How would you feel? Would you pity him for having so much debt? Would you wonder how he’d ever pay it back? Would you calculate how much those monthly payments would be?

If your instinct is to feel bad for someone with a multi-million-dollar loan, you should change your mind. Because our fictional bar patron could be Mark Zuckerberg, one of the richest people on earth.

That’s right—Zuck took out a $6-million loan in 2012 because he could get said loan at a mere 1% interest rate. That means the Facebook CEO actually made a profit on his mortgage when we adjust for inflation.

This is a crucial lesson. Just because someone has a loan doesn’t mean it’s a bad thing. And, in fact, sometimes taking out a loan is the smartest financial decision you can make.

So why do we always see the federal debt as a bad thing? Ask 10 people and more than half will say “yes, absolutely.” In fact, the federal debt ranked as the third-worst economic problem in a recent Gallup poll, and it tends to be one of the biggest national woes on Americans’ minds.

Well, I’m here to tell you that most Americans are wrong—and their debt worries are just one way their fears are causing them to miss out on big stock-market gains.

So why do people fear the national debt so much? It’s the same reason why they hear “$6-million debt” and freak out—even though a borrowed $6 million means nothing to someone like Zuckerberg.

Before I go further, let me just say that the debt does look terrifying when you view it in isolation. Right now, US public debt is about $19.84 trillion and may reach $20 trillion by the end of 2017. 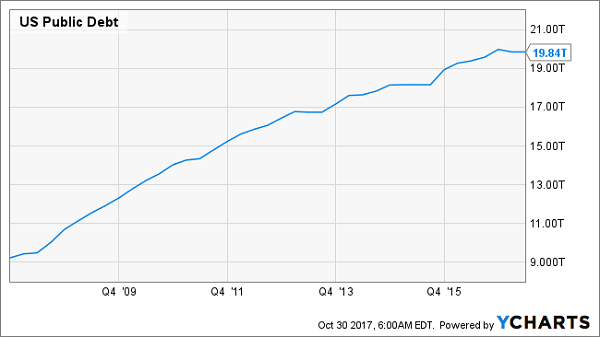 Per-Capita Debt? Still Ugly … Or Not 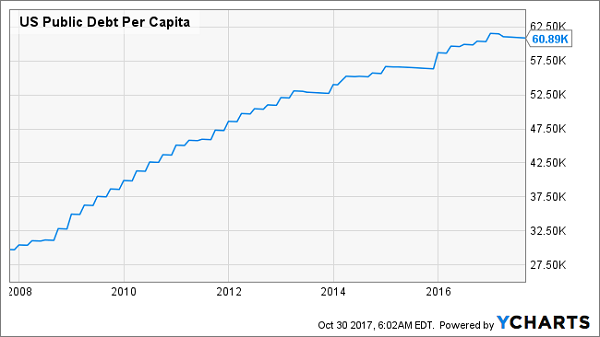 Looks scary, right? Except it isn’t.

(In fact, you can grab tax-advantaged 6.5%+ dividends and gains through government debt, particularly on the municipal side, through municipal bond funds, as I explained in a September article.)

But to get a sense of why the US national debt shouldn’t have us quaking in our boots, let’s look at total US GDP—that is the sum product of every American’s labor. It’s a good measure of how much wealth America is producing. Each year, the US is churning out $19.25 trillion in goods and services. 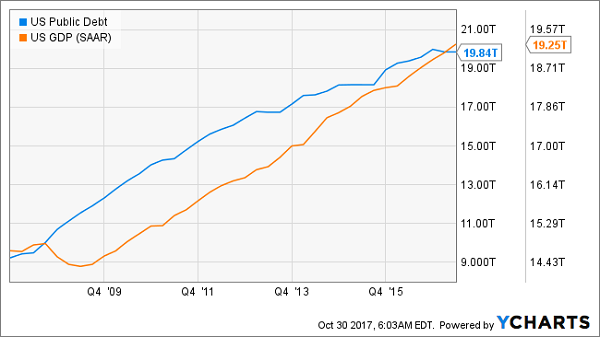 This means the country could pay off almost all of its debts with just 12 months of economic production.

Let’s put that in perspective.

The average US household makes $59,039 per year. For the average household to have the same 103% debt-to-annual income ratio the US government has, they’d need to have an outstanding loan on a couple of average-cost cars—but no mortgage, no student loans, no personal loans, and no credit card debt.

Would you say that household was on the brink of financial collapse?

If we compare America’s annual production to its indebtedness, we see that the US government actually has a low level of debt, if we think of that debt as loans that all Americans are responsible for. 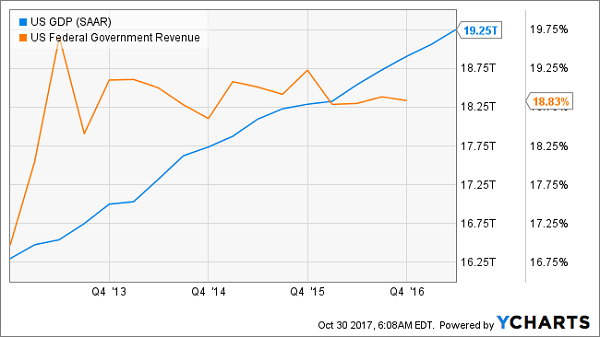 Right now, 18.8% of the country’s GDP is revenue to the US government, which means the Feds are raking in about $3.6 trillion per year from taxes, fines, investments and other sources of income. So the government could pay off its debts in less than six years if it focused all of its income on debt repayment.

Again, if we put that on a household scale, it would be like the average American household owing $323,735 in total debt. That’s about a third of the average mortgage balance.

In other words, the US government is financially healthier than the average American, no matter how you slice it.

Again, you’re just looking at one side of the balance sheet. Six million dollars in one loan sounds bad out of context—but when you compare it to the billions in assets Mark Zuckerberg has, you realize how pointless it is to fixate solely on debt numbers.

You hear a lot about the federal debt number, but you almost never hear about the US asset number. Just how much is the entire USA worth? If we sold every asset in the country, how much cash could we raise?

Fortunately, the Federal Reserve keeps track. They do it by estimating the total balance sheet of households and nonprofit organizations, as well as the total assets of US banks. Combine those two and you get $128.18 trillion. 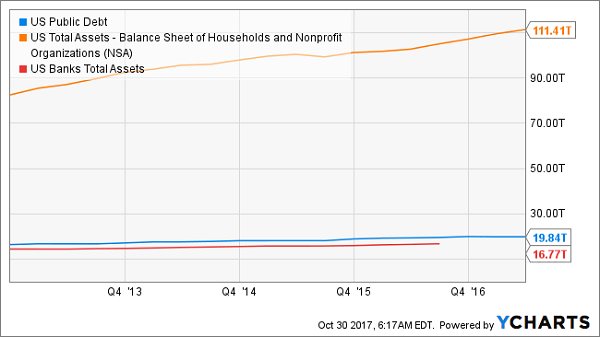 And this doesn’t include assets held at the Federal Reserve, assets owned by the US government (the White House, national parks and downtown government buildings are all worth something!), as well as assets owned by private companies.

So the next time you hear someone panic about passing off debt to our grandkids, ask them if they know how many assets we’re passing off to our grandkids and whether the US’s public debt load is actually manageable relative to the country’s annual GDP and government revenues. Because when you look at both sides of the balance sheet, America’s $20-trillion debt doesn’t look so bad.

How to Turn Debt Panic in Your Favor

At this point, you’re probably wondering why any of this matters to investors.

Simple: because fear of government debt has kept a lot of cash on the sidelines in the past decade, as first-level investors waited for the ballooning debt to tip us into a major crisis. 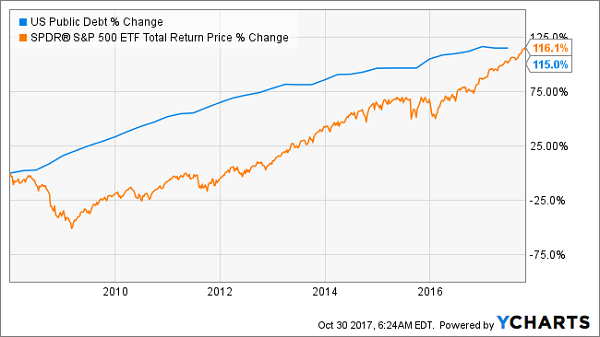 It’s also when my 5 favorite closed-end fund picks did this: 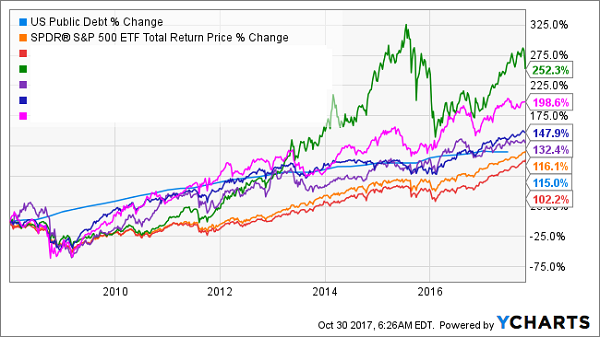 In fact, you’d be in even better shape because all 5 of these dynamic funds pay huge dividends—to the tune of 6.2%, on average, today—so you’d pocket a big part of that return in CASH.

Funny thing is, these 5 CEFs are still great deals: my proven 5-point fund-picking system has all 5 pegged for easy double-digit price upside—year in and year out—for a long time to come, on top of their incredible dividend payouts.

You can get the full story on all 5 of these income generators—all of which are top picks of my CEF Insider service—PLUS a FREE report that hands you 4 MORE unstoppable funds (average yield: 7.4%, forecast 12-month upside: 20%+), when you click here now.