Today I’m going to show you 4 REITs with high—and growing—yields that are bargains now. But you’ve only got weeks to act here, and likely less.

Because real estate investment trusts have underperformed the broader market by a lot in the last six weeks … but a proven contrarian signal is about to send the best ones straight back up—and higher still.

More on that, and 4 those terrific REITs to jump on now, in a moment.

First, check out how the Vanguard REIT ETF (VNQ), shown in the blue line below, has performed since hitting a six-month high on September 11, compared to the rest of the market: 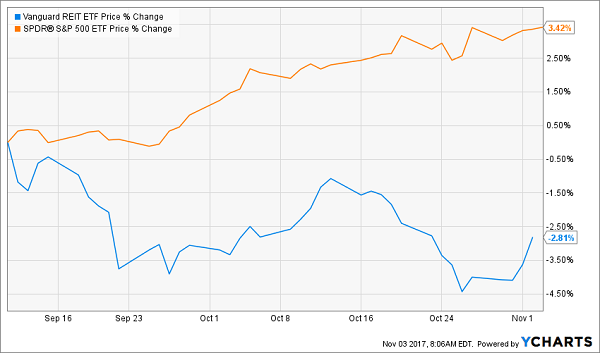 They’re mirror reflections of each other!

And better yet, REITs’ luck is about to change, thanks to that contrarian signal I mentioned off the top—which (I won’t keep you guessing) is a looming interest rate hike.

If you haven’t been keeping score at home, a quarter-point rise is all but baked in for the Federal Reserve meeting on December 13, according to the futures markets: 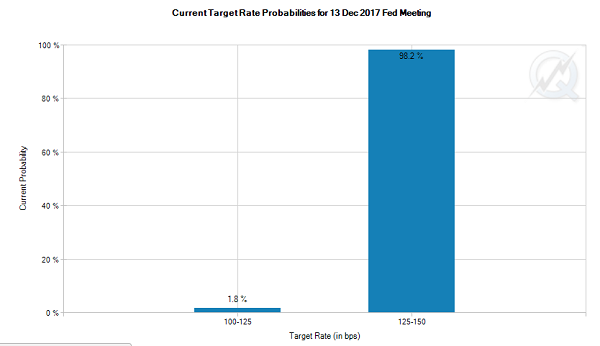 I say a rate hike is a contrarian signal because almost everyone thinks higher rates hurt REITs, as they drive up interest costs (REITs tend to have heavier debt loads than other companies because they borrow to buy and develop properties).

I’m going to take on this silly half-truth in a second.

Then I’m going to show you how REITs really perform when rates head higher. Finally, we’ll look at how we can tap this misperception for quick gains and high income, including through the 4 pullback plays you can buy now.

The Straight Goods on REITs and Rates

The argument that higher rates drive up REITs’ interest costs is true, but it’s only half the story, because higher rates also signal a strong economy—and that sends demand and rental rates soaring, dwarfing those higher borrowing costs. 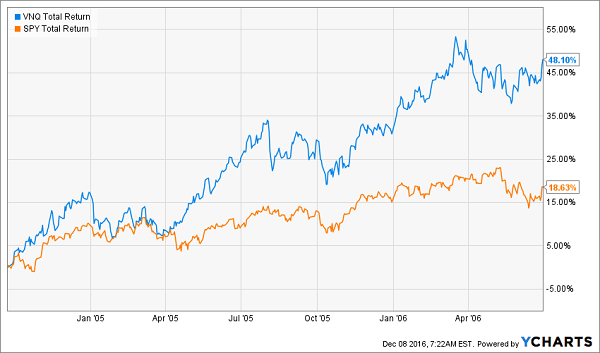 Funny thing is, in the weeks before a rate hike, first-level investors often forget history and dump their REITs, just as they did before the last rate hike, on June 14:

Snapshot of a Buying Opportunity 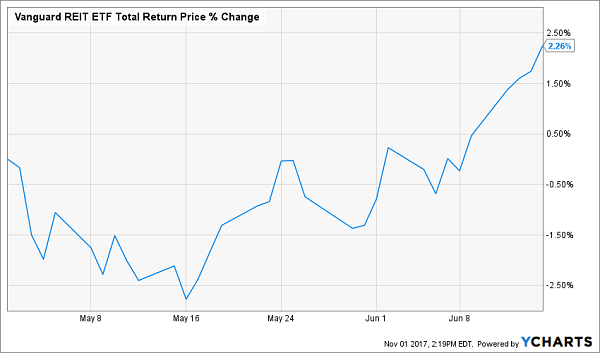 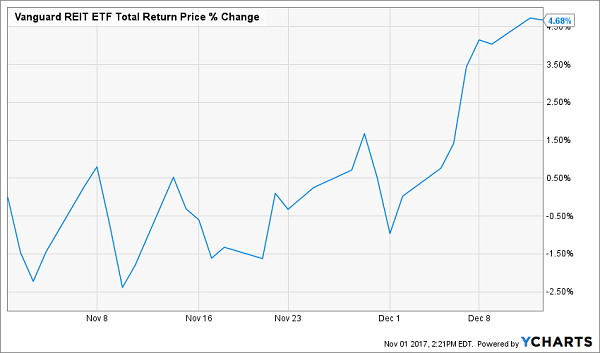 The bottom line? It’s time for canny contrarians like us to grab cheap yield and gains before they slip away again!

But before we get to the 4 REITs I want to show you today, I’m going to give you a whole sector—(45 REITs in all!)—to avoid like the plague, or throw over the side if you hold them.

I’m talking about retail REITs, which are sitting right in the path of tech titans like Amazon.com (AMZN).

Look, I’m not saying the shopping mall will go the way of the landline. But you can’t deny that Jeff Bezos and Co. are grinding away at supposedly “un-Amazonable” mall tenants.

Case in point: grocery stores. According to a January report, 70% of American households will do at least some of their grocery shopping online in 2025, up from just 20% now. What do you think that will do to the 38,000+ grocery stores in the US—and their landlords?

Let’s not wait around to find out. Instead, we’re going to go after 4 REITs that really are out of Amazon’s reach—or actually benefit from the online buying binge.

We’ll dive into all 4 below. But first, note that 2 of our top 4 are still below their September 11 levels, along with VNQ: 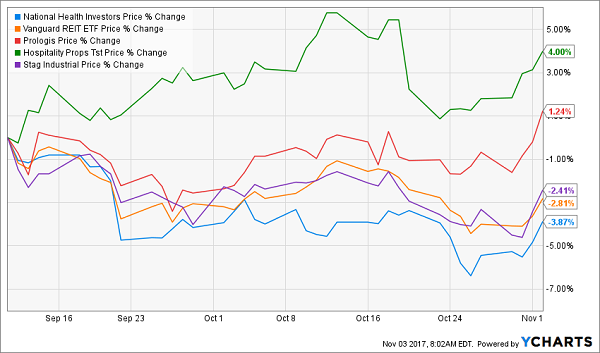 The two exceptions, as you can see in the red and green lines above, are HPT and PLD.

As for HPT, it’s well off early-January levels and trading at an insanely cheap 8.0 times trailing-twelve-month FFO, while PLD trades at a still-reasonable 18.5 times FFO, despite its gain. It’s also the fastest dividend grower of the bunch, as I’ll show you below.

Hospitality Properties Trust boasts a 7.3% yield and two big edges over feared hotel slayer Airbnb: it owns 310 hotels and aims to develop where the sharing economy isn’t: in suburbs and near office parks, where business travelers roam. Its brands include Courtyard, SpringHill Suites, Hyatt Place and Radisson.

Its second advantage? Nearly 200 travel centers connected to the US interstate highway system. These are more than gas bars: they also offer truck parking, restaurants and truck repair. It’s a nice business to be in, with freight haulage posed to jump 40% by 2028, according to the American Trucking Association.

Meantime, HPT boasts one of the safest payouts there is: with the last 12 months of payouts eating up just 57% of funds from operations (FFO).

STAG Industrial REIT and Prologis: I’ve written before about STAG, an industrial REIT with 324 warehouses across the US. It’s a perfect fit with HPT and is dialed straight into the online shopping trend, with three courier giants in its top 10 tenants: FedEx (FDX), DHL and XPO Logistics (XPO).

You can see the weighting toward logistics and other products with steady demand, like food and packaging, as well as reliable tenants, like governments, in the following breakdown of its top 10 sectors. 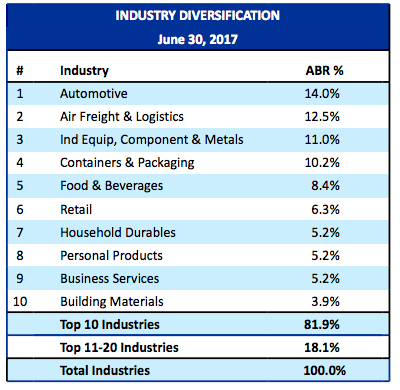 STAG takes some risk with its single-tenant-per-building model, meaning its warehouses are either 100% full or completely empty. But it does a great job of winning and retaining tenants, ending Q2 with a solid 94.8% occupancy rate.

You also get a nice $1.41 annual dividend (paid out monthly) yielding 5.1% and eating up 84% of FFO, which sounds high but is manageable for a REIT—especially a well-run one like STAG. The stock also trades at a reasonable 16.7 times core FFO.

Prologis is STAG’s worldly cousin, with 10 times more buildings: 3,319 across 14 countries. PLD sports a lower dividend yield, just 2.7%, but unlike STAG, its payout is growing like a weed, to the tune of 33% over the last three years (you can read my complete analysis of PLD and 4 more strong REIT picks here).

Finally, let’s move on to…

NHI is one of the most consistent dividend growers out there: its payout has risen for 15 straight years, and those hikes are healthy, at 7.7% annualized over the past five years. Plus, NHI sets you up with an outsized 4.9% dividend yield off the bat.

That dividend is backstopped by the REIT’s rising normalized adjusted FFO, which jumped 7.3% in the second quarter.

I expect that to continue, thanks to demographics: roughly 10,000 Americans turn 65 every day, and that will fuel soaring demand for senior care in the years ahead. NHI, with a presence in 32 states, stands directly in the path of that trend.

The kicker: after a 3.9% selloff by the first-level crowd in the past few weeks, NHI trades at 6.3 times normalized adjusted FFO—ridiculously low for a reliable dividend grower like this. Buy it now and hold it forever.

Note From the Publisher: I know I don’t have to tell you that, in today’s low-rate world, high yields (and fast dividend growth) are crucial if we want to make sure we don’t outlive our retirement savings.

That’s why I asked Brett to come up with a complete portfolio custom built to hand us a rock-solid 8% dividend payout.

As usual, Brett delivered in spades, handing me a potent 6-stock collection that does just that and hands us some nice “bonus” upside too!

But that’s not the reason why I’m adding my own note to the end of Brett’s article today.

You see, the 2 dynamic REITs in this “no-withdrawal” portfolio have been snagged in this ridiculous selloff. As a result, they’re both sporting ridiculous discounts to FFO and massive, safe yields (how do 7.3% and 9.4% payouts sound?) as I write.

These 2 powerhouses are the cornerstones of Brett’s portfolio, and I don’t want you to miss these deals!

We’re ready to share the names and tickers of these 2 terrific REITs—and all 6 investments in this one-of-a-kind portfolio—with you. CLICK HERE to get full details, including our complete 8% retirement-income strategy, now.