Of course, there are many boneheaded errors people make every day, like betting a lot of cash on a single stock. Or not having an investment plan.

While both of those will also drain your portfolio—and could even put your retirement on the rocks—neither is the most common pitfall you’ll find.

That may sound strange, but hear me out.

Because fearful investors avoid risk, but they don’t realize that all investing involves risk. You might think putting your money in U.S. Treasuries is a risk-free bet; after all, the American government isn’t going to go bankrupt anytime soon!

But what about 2011, when the U.S. flirted with defaulting on its debt? And what about the fact that Treasury prices fall as interest rates rise? That can also cause massive losses.

Some extremely risk-averse folks will even avoid Treasuries, putting their cash in CDs or plain old savings accounts instead. That’s not risk-free, either; if the United States collapsed tomorrow, there’d be no FDIC to guarantee your money!

I’m not saying we’re on the brink of a calamity that will make all investments worthless. My point is that going on a futile hunt for a risk-free investment is a fool’s game. Because even if you leave your cash in a bank account or under a mattress, inflation is going to eat at the value of your savings.

When you accept that, you stop asking the wrong questions (“How can I protect my money? How can I avoid losing money?”) and start asking the right ones (“What are my financial goals, and can this investment help me reach them? What’s the reward I’m getting for taking on the risk of this particular investment?”).

One of the best (worst?) examples of this big blunder happened quite recently.

Back then, California was seen as one of the biggest fiscal train wrecks in the U.S. Pundits tossed around words like bankruptcy all the time. Despite a flood of profits pouring into Silicon Valley and Hollywood, bad governance and worse demographics were touted as reasons for the Golden State’s bonds to crater.

Of course, they did.

California municipal bonds were hit hard. Despite their tax-free status, which makes them popular in the high-tax state, they were selling for pennies on the dollar. I remember talking to a lot of investors who thought it was crazy to buy California bonds back then. And because they were scared, they stuck with cash instead.

Fast-forward to today, and California municipal bonds are actually priced as less risky than U.S. Treasuries!

Anyone who bought back when the market was terrified made a killing. Compare the MFS California Municipal Fund (CCA) to the broader market through the iShares National Municipal Bond ETF (MUB). The fund specializing in California bonds more than doubled the return on MUB over the last five years:

The Herd Scatters—Contrarians Cash In 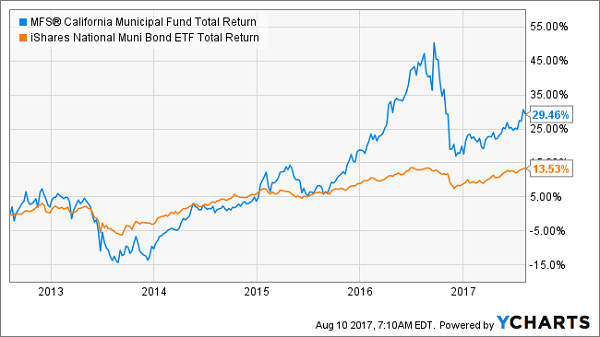 Oh, and that’s much better than the -6% return you’d get on cash for the same period (since inflation has made the dollar 6% less valuable during those five years).

That doesn’t mean you should go out and buy CCA now. As you can see from the chart above, the fund isn’t well managed, which is why it cratered from an over 45% return in late 2016.

Rivals Take CCA to the Woodshed 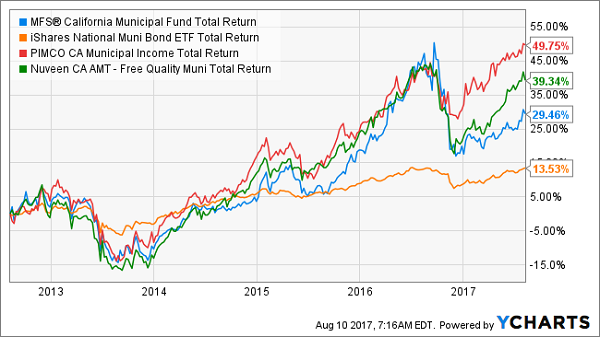 How did they do it? Simple: these funds’ managers knew that the panic over California municipal bonds five years ago was a buying opportunity, so they bet big. And anyone holding these funds since then has reaped the rewards.

These funds also pay a staggering amount of income—PCQ yields 5.4%, and NKX pays 5%. Plus those dividends are 100% tax-free for California residents and are federal-tax-free for all American taxpayers.

But the lesson isn’t to buy California tax-free municipal bonds. Nowadays, people are talking about Illinois in the same way they were talking about California half a decade ago. And, most likely, Illinois will prove the fear mongers wrong and recover. That’s how it usually goes in the municipal-bond market. Anyone who recognizes that and jumps in will make a handsome profit.

(By the way, I recently made another contrarian buy call on an unrelated municipal-bond fund that’s more than worth your attention. You can read about that pick here.)

The bottom line: if you’re the kind of person who lets fear control your investing decisions, you’re making the biggest mistake an investor can make.

An even worse mistake? Ignoring these 7.6%+ dividends!

Here’s something else the herd is overlooking: a dead-simple way to bag double-digit price gains in their income portfolios!

I’m talking easy 20%+ price upside in the next 12 months! And you won’t have to sacrifice a single cent of dividend income to do it.

In fact, if you make the 4 “one-click” buys I’m going to show you now, you’ll instantly trigger an outsized 7.6% income stream—a cash tidal wave 4 TIMES BIGGER than what your average S&P 500 investor is scraping by on today!

Add it all up, and you’re looking at a nearly 30% GAIN here, with a big chunk of that in CASH.

These 4 stealth funds are what I call the “holy grail” of investing, because they offer you incredible gains and massive income in one single package. I’ve put everything you need to know about them before you invest in a new special report—which is waiting for you here.

But I must warn you: the herd is starting to catch on to these 4 undervalued retirement lifesavers. Over the last few weeks, their incredible discounts have started to narrow—and so have their dividend yields.

There’s still time to get in, but you must act NOW!