This Unloved Bond CEF Is Taking Off: Buy Now

Something wonderful happened last week: one of the municipal-bond CEFs I recommended to ContrarianOutlook.com readers more than two months ago raised its dividend.

The Pioneer Municipal High-Income Advantage Trust (MAV) hiked its payout by over 5%, giving the fund a 5.3% yield.

The stock price caught a lift on the news, bringing it to a 4.3% total return in a little more than two months, outperforming the municipal-bond fund benchmark iShares National Municipal Bond Total Return Fund (MUB) and the SPDR S&P 500 ETF (SPY). 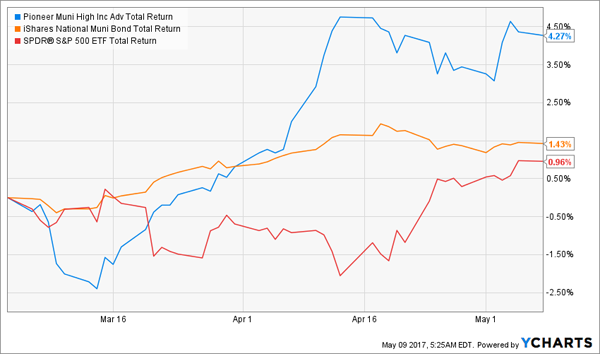 The hike came after a series of dividend cuts dragged down the fund’s share price over the last few years: 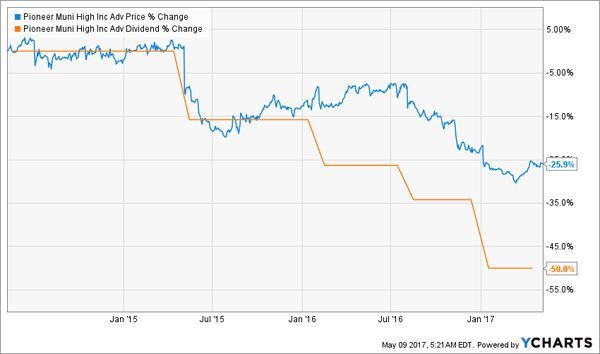 The lower yields didn’t do much to attract new investors, so the fund’s price kept slumping along with the weaker income.

Of course, first-level investors look at charts like this and head for the hills. No one wants to jump into a fund that’s cutting distributions and seeing its price crash, right?

But there’s more to MAV’s story than most people know.

Two months ago, I suggested that this fund had gotten far oversold because of the oversimplified view that past dividend cuts meant future ones were on the way. I’ll get into why the herd’s opinion was so far off in a moment.

But for now, what MAV’s recent jump means is that it isn’t the bargain it once was. When I recommended it, I noted that the fund was “down 11.7% in the past year and trades at a 6.8% discount to its NAV [net asset value, or what its underlying holdings are worth].” That’s a great discount; sadly it’s since shrunk to 5.2%, which is still decent. But even though MAV is a well-run fund, I don’t recommend it right now, because there are still cheaper municipal-bond CEFs out there.

MAV’s discount to NAV has narrowed so much because it’s gone up over 3.4% on the open market since my initial recommendation, but the underlying assets within the fund have only gone up 1.1% over the same period. This kind of thing happens all the time in CEFs, and is the kind of price movement savvy CEF investors look for when they want to identify funds set to outperform in the short term.

A Shrinking Pool of Deals

One thing that’s certain is that bargain-priced muni-bond CEFs are going to get tougher to find.

The reason? Investors are piling back in: high-yield muni-bond funds saw their inflows soar from $66 million a year ago to $222.9 million by the end of March. By the middle of April, inflows hit $1.6 billion, which is the third-largest amount in history.

The main reason is that the market wrongly predicted President Trump would reform America’s tax code and reduce one of the biggest incentives to buy municipal bonds: the tax-free income.

In the United States, municipal-bond income is not subject to federal taxes; for those who pay state taxes, some muni bonds are also tax-free at the state level, depending on your state, the issuer of the muni bonds and a few other factors.

Late last year, there was one clear answer to that question: investors who thought Trump’s tax cuts were going to erode munis’ tax advantages. That’s why billions of dollars fled the muni-bond market and caused muni-bond funds to fall, as happened with both MUB and MAV: 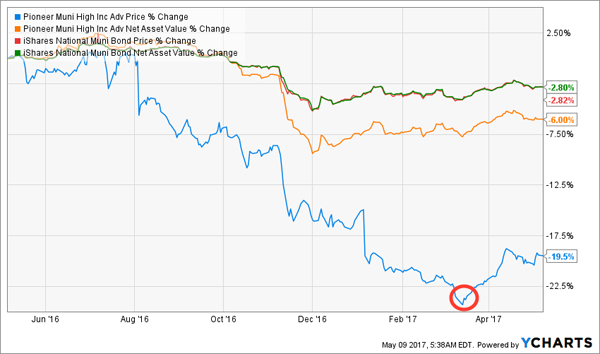 Of course, there’s a pretty big difference here. While MUB and MAV’s NAVs were down in the single digits, MAV’s price plummeted by over 23% at its lowest point, which created an absurd disconnect between the fund’s historical discount to its NAV and its current discount.

CEF investors need to wait for the right buy signal when markets overreact or oversell one fund more than another. This is how my ultra-safe muni-bond holdings are beating the S&P 500—something that muni ETFs like MUB have failed to deliver. It’s also the method CEF Insider uses when looking for opportunities across the CEF universe.

My proven fund-picking system just turned up 4 other CEFs that are far better deals than MAV right now—and they hand you much fatter yields, too. For a limited time, I’ll give you the names of all 4 in a special report I’ve just released called “4 Great CEFs to Buy Now: 7.5% Yields and 20% Upside Ahead.”

These funds’ discounts to NAV are all far wider than the historical average—a dead giveaway that double-digit gains are on the way, and in short order, too!

Better yet, they’ll hand you a nice bundle of cash up front, thanks to their outsized 7.5%+ average yield!

You owe it to yourself to discover this 4 unsung CEF picks and see how their high income and HUGE gain potential can boost your nest egg. Simply CLICK HERE to get all the details now.