Let’s face it: people make a lot of stupid mistakes.

You see it every day: they turn on to the freeway without signaling. They fall for obvious scams. They throw money away on useless things.

How? By being a contrarian.

Contrarian investing means heading away from the crowds: buying heavily when everyone is fleeing in fear and selling when everyone says the asset is a sure thing. (I’ll show you 2 unloved funds ready to pop—plus 2 overbought names ready for a fall—in just a moment.)

Contrarian investors bet big against housing in 2007–08, like hedge fund mogul Michael Bury, who became famous thanks to the film The Big Short. They also bet big on housing in 2009–10. Blackstone Equity, for example, bought $9 billion worth of single-family houses during the low point in the crash.

Now Blackstone earns $875 million every year in rents alone from its portfolio of 48,000 homes in the US. That’s a 9.7% rate of return. Plus, house prices are going up by an average of 7.1% year-over-year, meaning Blackstone’s actual annual return is a whopping 16.8%!

But back then, if you had suggested buying a house was a good investment, people would look at you like you were crazy. I know because this is exactly what I suggested back then, and people thought I was crazy.

This is why I love being a contrarian. Those two houses would’ve been a lot more expensive if tons of other investors saw the value I saw and started bidding their prices up. Instead, I got a 60% discount on the listing price because no one else was buying.

Being a contrarian means you can turn other investors’ dumb decisions into profits for yourself. And one market where this is easily done is closed-end funds.

CEFs offer smart investors a chance to outperform because they’re too small for the really smart money to buy, and they’re too big to be manipulated by penny stock–shilling con artists. They’re also a low-profile asset class, losing out against exchange-traded funds (ETFs), which have grown to manage over $1.8 trillion in assets, versus the measly $280 billion in CEFs.

What a Track Record! 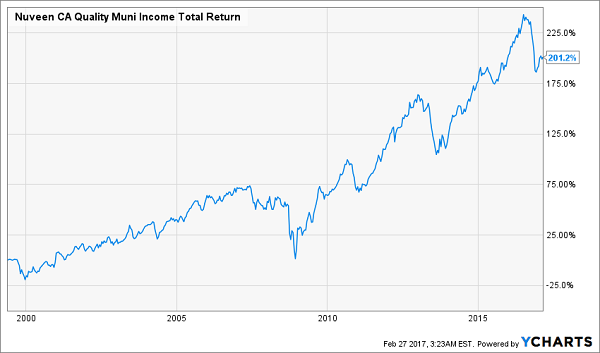 But despite its long-term track record and its high, tax-free dividends, NAC is trading at a 5.5% discount to its net asset value (NAV) and has plummeted 7.9% in the last year. Oh, and it’s outperformed both MUB and CMF since its inception. 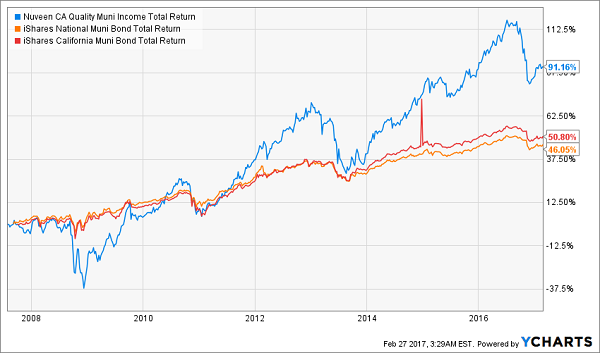 As “stupid selloffs” go, NAC isn’t the worst case. Not by a mile.

The Pioneer Municipal High Income Advantage Fund (MAV) is down 11.7% in the past year and trades at a 6.8% discount to its NAV, meaning its dividend yield is now a whopping 6.3%, tax-free. This fund has had a 6.6% return on its NAV since inception, meaning it’s a long-term performer in its own right. But people aren’t buying.

Why not? You know why not.

One of the most ridiculously overbought funds is the Nuveen Minnesota Quality Municipal Income Fund (NMS), which is almost identical to NAC, except it’s focused on Minnesota muni bonds, rather than those of California. Yet investors are too dumb to see how similar these funds are, because they have bid this fund up so much that it’s now selling at an 11.6% premium to NAV. NMS has gone up over 9% in the last year, despite municipal bonds being flat in the same timeframe. 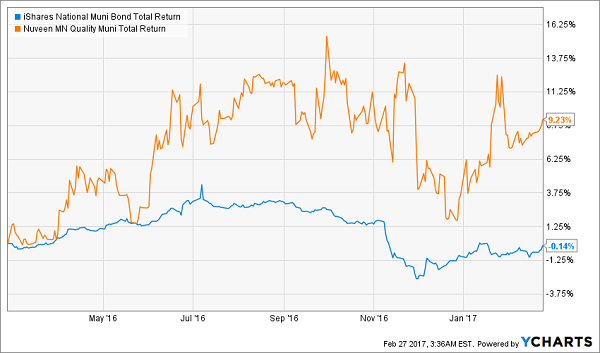 NMS isn’t a bad fund, but it’s a bad fund at its current price. That isn’t stopping people from jumping in, despite the much better value to be found in the nearly identical California-focused fund.

Want another example of stupid buying? Look at the Guggenheim-managed Fiduciary/Claymore MLP Opportunity Total Return Fund (FMO), which has returned an obscene 83.2% in the past year, versus 36.9% for the benchmark Alerian MLP ETF (AMLP) over the same period. 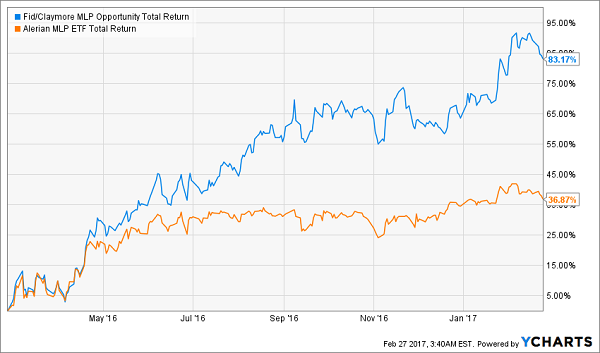 Is FMO’s outperformance justified? Not if you consider its track record—a measly 1.3% annualized return over the last five years and historical volatility that is twice as great as AMLP’s.

Oh, and FMO shares are actually down 18.7% since inception and have spent almost as much time in the red as in the green.

Betting against the crowd is a proven way to build wealth. But it takes legwork to separate the true bargains from dangerous names that are cheap for a reason.

You can give yourself a big advantage with the 6 unsung investments in our 8.0% “No-Withdrawal” retirement portfolio.

And just like MAV and NAC, they’re off the herd’s radar, so they’re cheap now, but that won’t last. Don’t miss out. Click here and I’ll share our 6 top picks for 8% income and double-digit upside.