Why Big Oil is Still a Big Dividend Trap

There are, literally, a billion reasons to avoid the energy sector right now.

Hedge funds now own a billion barrels worth of bets that crude oil prices are heading higher. Problem is, these guys are usually wrong – especially when they wager with such conviction!

In April 2014, I warned that then-$103 crude oil was due for a drop. U.S. crude oil inventories were at 5-year highs, yet money managers were “net long” 336,000 contracts on crude oil future. They were doubling down on the goo at the worst possible time.

When oil prices began to roll over, hedgies were forced to liquidate their bad bets in unison. It took them almost two years to clear their books, as they lightened up on their bullish bets until mid-January 2016: 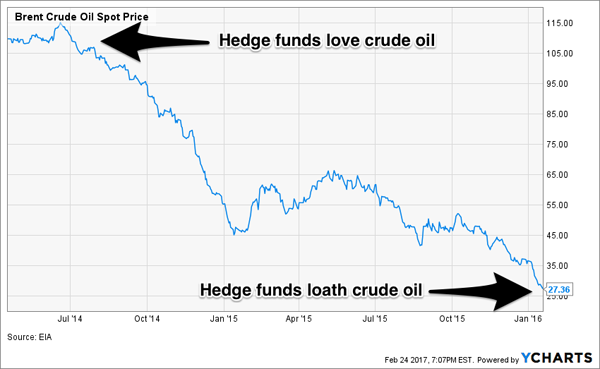 Hedge fund sentiment towards oil bottomed around the week of January 11, 2016 with the contingent holding just 36,000 bullish bets – a near 90% liquidation from peak popularity.

Oil prices, of course, bottomed a few weeks later. The goo has since doubled, and hedge fund managers have been buying the rally. They now own more than 400,000 futures contracts representing bullish bets (that’s over a billion barrels in total): 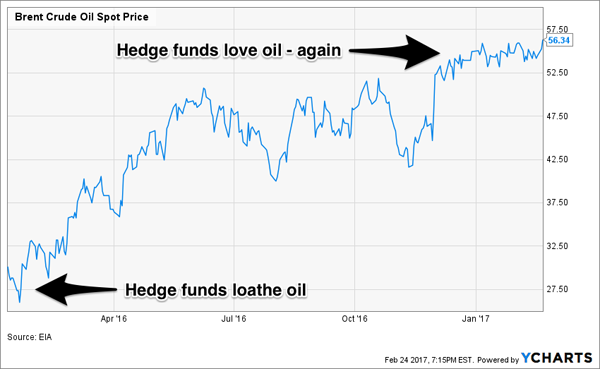 This group is the perfect contrarian indicator for crude oil because their trading is perfectly synchronized. They’re all on the same side of the trade at extremes – at which point the price has nowhere to go but the opposite direction.

Hedge funds are small potatoes in terms of the assets they manage. They manage about $2.8 trillion, a fraction of pension funds ($31.5 trillion), insurance companies ($24.4 trillion) and mutual funds ($23.8 trillion). But the hedgies are much more active traders, especially when it comes to certain issues – such as crude oil and gold. So they can literally move these smaller markets with all of their sloshing around back and forth.

And today, we once again have plenty of oil. The U.S. has 518.7 million barrels in inventory, the upper limit of the average range for this time of year:

If oil crashes again, you won’t want to be stuck holding any stocks in the sector. Some dividend investors insist on arguing that, as long as their dividends are safe, they are content to ride the ups and downs. Problem is, the downswings eat up too much of your valuable capital. Yields of 4% or so aren’t much consolation when you’re losing more in price depreciation! 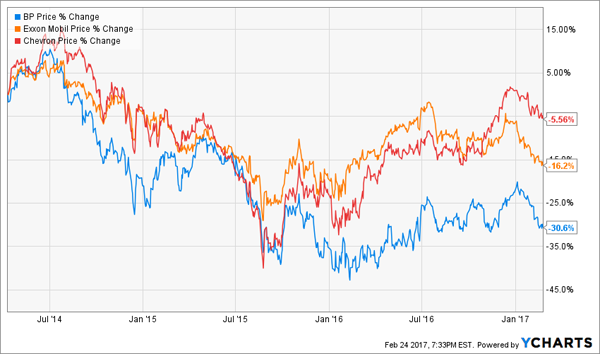 Even the blue chip producers are struggling to fund their dividends with $54 oil:

When it comes to dividend payout ratios, I prefer them below 50% for “product” companies like these. Lower is generally better except when “low” is actually a negative number!

These three firms should have cut their dividends already, and a “surprise” oil crash will only thicken their dilemma. So let’s consider big oil a big stay away until we see these guys a little less enthusiastic about the goo’s prospects. Preferably by a billion barrels, give or take.

This month, the best bargains are far away from the oil patch. They are investment vehicles that few income investors are familiar with (which is why they’re bargains).

They are in a “sweet spot” with market caps between $1 billion and $3 billion. Which means they’re plenty liquid enough for you and me, but not for the big institutional investors that hold two-thirds of all shares in public stocks (including the big oil dividend traps).

Combined these hidden income gems make up only a fraction of the stock market’s total capitalization – so they don’t get much coverage from the financial media.

And that makes these ignored corners of the financial markets ideal places for us to search for high yields. Now like any sectors there are good investments and bad investments, of course. So let’s talk about these 3 areas – and how to employ a contrarian approach to find the best values, which I define as secure 8% yields with price stability and even 7% to 15% upside in many cases.