Things are tough for contrarian investors these days.

Back in August, for example, I recommended buying financial stocks. It was an easy call to make.

At the time, the Financial Select Sector SPDR Fund (XLF) was down 4% from a year earlier, and the worst performers had fallen much further. I specifically saw value in Wells Fargo (WFC), KeyCorp (KEY) and PNC Financial Services (PNC), which had fallen 14.5%, 17.6% and 12.0%, respectively.

I bought heavily into these three stocks at the time, expecting financials to recover over the short term, especially if Trump won the election.

Here’s how they’ve done since then: 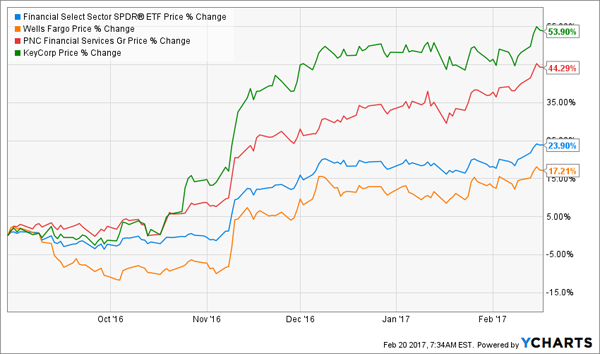 The strong recovery since August has convinced me to back off on financials, since the market has finally seen in these firms what I saw in them last summer. But now I have freed-up cash from my KEY, PNC and WFC sales, and that means I need to find oversold alternatives to buy.

Sadly, that’s not easy right now—but I am eyeing one sector (and 6 stocks) that’s setting up for some serious gains.

More on that in a moment. First, let me show you how I found these 6 picks.

A quick glance at a heat map of the various S&P 500 sectors reveals that all of them are up from a year ago—a rare situation, and something we haven’t seen consistently since oil plummeted in 2014.

All Sectors Are Getting Market Love 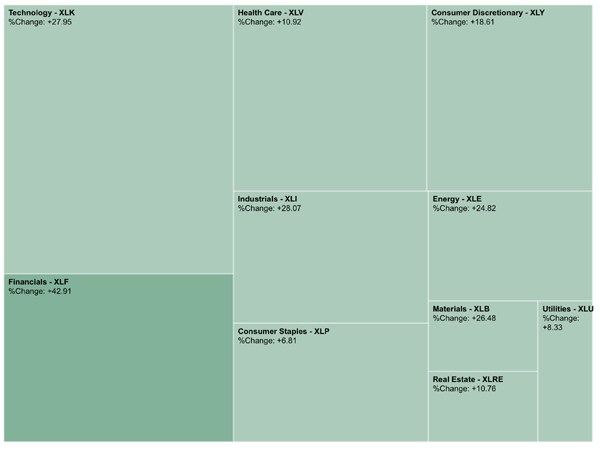 The worst-performing sectors (consumer staples, utilities) are the kinds of places investors flock to in times of risk aversion. Now that the bulls are fully in charge, they’re going up much less than the rest. But this doesn’t mean we should buy into those sectors, since a market downturn can cause cautious investors who like these sectors to sell off in a panic.

In such a situation, we need to be a bit more aggressive. If we look at a shorter time horizon, we see that one sector isn’t doing as well as the rest: real estate. 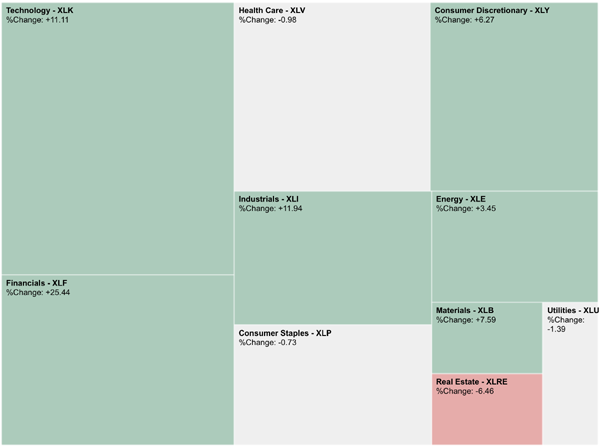 This underperformance is caused by two dynamics.

Secondly—and more crucially—REITs are correcting after a major run-up in the early months of 2016, when the sector surged following an awful 2015. Amusingly enough, 2015 was bad because of market fears about higher interest rates.

All of this rate hysteria tells me that higher rates have been gradually priced into REITs, making now a somewhat attractive time to jump in. But it’s not a perfect time, since the sector is still up over 10% from a year ago.

This means we need to be even more particular.

Because if we just buy the Real Estate Select SPDR Fund (XLRE), we’ll end up getting some overpriced firms. Instead, we need to look at what’s inside this fund and pick the best-valued companies.

To do this, let’s start with XLRE’s top 10 holdings. They are:

These are the biggest and most successful REITs in America, so how can we pick among them?

The first metric we want to look at is funds from operations (FFO), a better measure of REIT performance than earnings. All of these firms are generating more FFO than they’re paying out in dividends, so their payouts are sustainable for now. But we want to also make sure we’re buying the cheapest REITs, or those with the lowest price-to-FFO ratios:

Looking at the chart above, we see that EQR is an obvious buy, while PLD, HCN and AVB are also worth considering. Note that HCN is also the highest yielder, so we’re getting a strong income stream by making this pick.

Some investors may worry about Prologis’s dividend decline over the last decade. In the dark days of the global financial crisis, PLD cut its distributions significantly to maintain cash flow and fund its expansion. This was a smart decision, since it helped the company expand its footprint and more than triple its revenue, from $700 million annually to $2.5 billion over the last 12 months.

It also means PLD’s dividend is one of the best covered among all REITs. Over the last 12 months, PLD’s FFO was $3.61 per share, while its dividend is now an annualized $1.68 per share. That means this company could double its payout and still have $0.25 per share left over. PLD has become one of the safest REIT dividend plays out there, which means it’s folly to avoid the stock because of a smart financial decision it made a decade ago.

With that in mind, we’ll keep PLD. And of course, we’ll also consider EQR, HCN and AVB. That means we’ve got a four-REIT portfolio covering the tech, healthcare and residential sectors, with a geographical footprint over the entire United States. That’s a lot of diversification in just four stocks.

If we buy all four of these, our current dividend yield would be an average of 3.7%, which is a bit higher than the average yield for these 10 stocks and is about the same as XLRE’s yield.

Even better news: In 10 years, our dividend yield on this portfolio will be 4.6%, based on current growth rates.

That’s good, but it’s not good enough. Let’s add SPG and PSA to our portfolio, giving us even more diversification (commercial real estate and self-storage space).

SPG is a little more expensive than AVB, but not by much, while its 10-year dividend-growth rate is the second highest of the group.

PSA has the biggest dividend-growth rate by far, which partly justifies its higher price, while its dividend-coverage ratio justifies the rest. Annualized payouts are $8 per share, and FFO is $10.57, meaning dividends can go up by 25% and still be fully covered.

Putting it all together, we’re getting fully covered dividends, a high yield and rising payouts. Our current yield is 3.6%, and our yield in 10 years is going to be 6.5%.

But I’m not just buying these REITs because I want fat dividends that are going to get fatter.

I’m really buying them because I see capital gains upside in the short term. All of these trusts are 15% off their 52-week highs, on average, and are cheap or fairly valued relative to the broader REIT universe. The long-term average price-to-FFO ratio of the top 10 holdings in the Real Estate Select SPDR Fund is 17.7, which is above the ratios on all of these stocks except SPG and PSA. To get to 17.7, PLD, AVB, HCN and EQR will have to go up an average of 81.8%.

That’s somewhat offset by the price declines SPG and PSA would need to get to the same price-to-FFO ratio (-2.7% and -15.7%, in case you’re wondering), but that doesn’t bother me; I’ll happily keep both for income, or I can choose to just not buy them in the first place.

This is the real power of choosing stocks inside a sector instead of just buying the sector ETF. We can pick which stocks to keep for income and which to sell early when they get fully valued, plus we can avoid buying the pricier stocks in the index. Over time, this results in higher income and overall returns.

Taking the same ETF the passive crowd buys and “dissecting” it, as we’ve done above, is a great way to build a portfolio. And as I just showed you, when you do it with high-yield investments like REITs, you can quickly build a 6.0%+ yield and set yourself up for double-digit gains, too!

But if you want to build a diversified portfolio that goes beyond REITs and scoops up other high-yield investments, you’ll have your work cut out for you.

Luckily, you won’t have to worry about that once you’ve checked out our “No-Withdrawal” retirement portfolio. It includes 6 undervalued high yielders that, combined, throw off an immediate 8.0% payout. That’s enough to generate $40,000 in income from just a $500,000 investment!

Here’s what you get in this one-of-a-kind portfolio:

This is just the start. Simply click here and I’ll give you the names of these 6 off-the-radar income plays and our complete strategy now.