Dividend growth is one of the keys to a strong retirement portfolio (and 12% annual gains forever). While any stock boasting a big stated yield is sure to grab your attention, if that dividend isn’t growing, it’s actually shrinking (as inflation eats up more and more of that income every year.)

That’s why I regularly keep my eye on dividend increases … and why I’m looking at a bundle of stocks that are very likely to up the ante on their regular payouts over the next few months.

If you’re an income investor, it’s increasingly important to focus on dividend growth because – guess what? – it’s slowing. Check out the chart below, which shows the S&P 500’s rate of dividend growth has pulled back to its lowest point since 2011.

At 5.7%, you’re still clobbering inflation, which has idled below 3% for years. But remember, that’s an average – you and I can do much better.

Today, we’ll discuss eight dividend stocks that I expect will increase their regular payouts to shareholders this summer. Some are offering raises from a position of strength, while others are tossing them out as an act of desperation!

Caterpillar (CAT) comes with a big potential caveat in that it’s very possible that we won’t see a dividend increase out of the Big Cat this summer – but we should.

Starting in the 1990s, Caterpillar rolled out a dividend increase every summer starting with its quarterly payout due in July. However, from 2014 to early 2016, CAT shares dropped more than 45% as the business hurtled steadily downward – the company’s revenues ended up plunging from $55.1 billion in 2014 to just $38.5 billion in 2016.

But Caterpillar has been rebounding hard for more than a year and is coming off a massive first-quarter beat that saw CAT amp up its full-year forecast. Cost cuts are delivering results, and cash flows are improving, so don’t be surprised if Caterpillar takes one more step toward normalcy with a dividend hike, announced sometime in June.

While EDR tends to go through fits and starts, shares have more than quadrupled out of their 2009 lows, and the company boasts steadily rising revenues. Its dividend has also improved slowly but steadily, by about 27% over the past five years.

The company typically announces a dividend hike in mid-July, and this year, EdR could use it – it’s off 11% year-to-date, and didn’t get much help from a Q1 report that showed double-digit improvements in the top line and core funds from operations.

Duke Energy (DUK), on the other hand, has had a decent enough 2017, up about 6% to only slightly underperform the S&P 500 – not bad for a sleepy utility stock.

Still, Duke has a laundry list of issues, such as a high valuation – not just for a utility stock, but even compared to its own historic valuations – and extremely sluggish growth in its dividend. I’ll give credit where credit is due: Duke Energy has paid out an uninterrupted stream of dividends for 90 straight years, but there’s not much oomph in it.

If Duke wants to make a statement, when it announces its next hike in July, it’ll hopefully do better than the token 3.6% improvement it doled out last year. 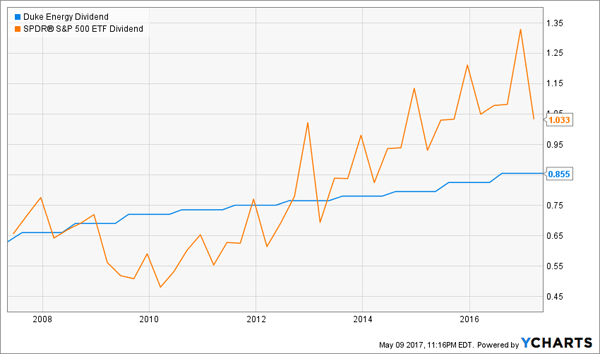 Simon Property Group (SPG) is yet another stock that could use a substantial dividend boost to rally the troops.

SPG shares have been slammed over the past year or so, off roughly 30% from their all-time highs set in August 2016. It’s really more story than fundamentals – Simon is going through a slow 2017, operationally speaking, though analysts still expect the top and bottom lines to grow this year and next. Still, the increasing crawl of Amazon.com (AMZN) has investors fleeing the retail space, and some babies are being thrown out with the bathwater.

Simon, which has aggressively grown its payout by 75% over the past year, isn’t necessarily a lock to upgrade its payout this summer. SPG isn’t consistent about when it hikes its payout – sometimes it goes a couple quarters, one quarter, three quarters. But Simon upgraded its dividend in February and hasn’t announced an improvement for the current quarter, so it’s likely that, come July, SPG will be writing larger checks to its shareholders.

The company’s revenues are growing, its income is swinging higher and analysts only see good things going forward despite what the overall narrative might suggest. And yet NNN, like SPG, is off roughly 30% over the past year or so.

This stock is a potential bargain at this point, and the temptation should be just a little sweeter come July, when NNN is likely to take its dividend a notch higher for the 28th consecutive year.

If Realty Income (O) doesn’t increase its payout this June, you should put in a call to the sun to see if it plans on rising anymore.

Realty Income and dividend increases are essentially synonymous at this point, with “The Monthly Dividend Company” boasting 78 consecutive quarterly improvements to its monthly shareholder check, which spans 562 straight months at last check.

For the record, Realty Income – despite outstanding occupancy and high-quality tenants – is in the same boat with SPG and NNN, clobbered since 2016 as Wall Street spins the tale of retail’s demise. But it too is shaping up to be a bargain, and it’s a dividend growth dynamo to boot, improving its payout by about 45% in the past five years alone.

Realty Income (O) Is Among the Most Tenacious Dividend Growers 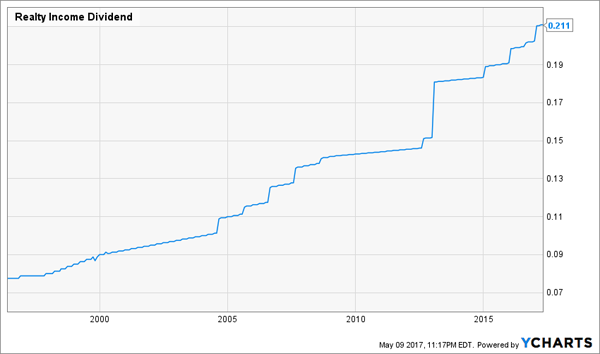 We have another REIT in W.P. Carey (WPC), though unlike the prior few REITs, WPC is much more diverse in its holdings. Its portfolio is about 30% industrial, 25% office, 16% retail and 14% warehouse/distribution, with the remaining allocated to self-storage and other types of property. It’s also geographically diverse, with roughly two-thirds of its real estate based in the U.S., and most of the rest in Europe, including 9% Germany and 5% United Kingdom.

While shares of this REIT have essentially traded flat for four years, the company has been a pinnacle of earnings growth. WPC has increased its payouts in 63 consecutive quarters, including 75% growth over the past five years. It’s due for another announcement in June, and I don’t expect W.P. Carey to miss a beat.

Last, but certainly not least, is Macquarie Infrastructure Group (MIC), which owns, operates and invests in several infrastructure companies, including things like bulk liquid terminalling, airport services, and gas processing and distribution.

This diverse blend of holdings isn’t just ideal for mitigating risk – it also helps support a rapidly climbing payout that has grown each quarter since 2012 by a total of 520%. Admittedly, that’s a bit inflated because that counts the 20-cent payout MIC re-started with after cutting its dividend in the midst of the Great Recession, but even 10% improvement over the past year isn’t anything to sneeze at.

Macquarie just pushed its dividend higher just a few days ago, but investors can expect another announcement at the very beginning of August.

My favorite dividend grower today is still selling for “free lunch” prices thanks to its own 2009 bankruptcy. It’s selling for less than nine times free cash flow (FCF), which is astounding considering that its turnaround CEO has already:

Its last dividend hike was an amazing 67%, and its stock price is still catching up. Which means this stock has 43% upside for the year ahead, thanks to its continued payout growth and share repurchases.

I have an email with my full analysis attached ready to be sent to my Hidden Yields subscribers this Friday. Are you a current subscriber of our dedicated dividend growth publication? If not, why not?

I’d be happy to set you up with a 60-day risk free trial. You’ll receive my favorite pick this Friday along with my latest report highlighting 7 more dividend growth stocks with 100%+ upside.

If your retirement nest egg isn’t yet where you always wanted it, these dividend growers are simply the safest way to guarantee 12%+ annual price gains while you also enjoy a current income stream that (oh by the way) happens to grow by 10%+ every year!

“Efficient market” proponents are dead wrong – you can bank 12%+ annual returns following this safe dividend growth strategy. Click here and I’ll outline the strategy for you in detail – and I’ll also share details on my 7 favorite buys today.