“If you’re not growing, you’re dying” is a well-worn phrase slathered all over the business and investment world, for good reason: It’s true. And it strikes a particularly loud chord when it comes to dividend investing. If your retirement portfolio is full of stocks that are paying the same dividend they did years ago, then, you’re certainly losing the war with inflation, and your nest egg probably isn’t performing to its full potential.

But if your retirement portfolio is stuffed full of companies like the five dividend growers I’ll share with you today, then you’ll stay ahead of the pack, year after year.

The easiest way to understand the importance of dividend growth is to simply look at inflation. Let’s say you bought something for $1 in 2016. Even with inflation at a snail’s pace of just 1.5%, that same item would cost about $1.01 this year.

That doesn’t sound like much, but it really compounds over time:

What does this mean for your investment portfolio? Well, any dividend stocks that haven’t raised their payouts by at least 1.5% over the past year are, in essence, paying you less this year than they did in 2016. And if they haven’t upgraded their dividend by about 52% in the past 20 years, you’re getting the short end of the stick!

That’s one reason why it’s so important to hold dividend stocks that hike their distributions over time – because that’s the only reason to even keep up, let alone get ahead!

But there’s another reason to hunt down dividend growth like a dog: sheer performance.

ETF provider Reality Shares, which specializes in dividend funds, points out in its research that “Companies that are able to grow their dividends have historically outperformed the rest of the market.” Their market data shows just how connect dividends – and dividend growth – is to performance.

My suggestion? Take the advice of former Notre Dame coach Lou Holtz: “In this world you’re either growing or you’re dying, so get in motion and grow.” That’s why today, I’m going to show you a quintet of dividend stocks that can get you started on your path to dividend growth in a hurry. Each of these stocks is expected to hike their dividend sometime within the next five months.

Here are all five, in order of increasing yield.

Apple (AAPL) is anything but a dividend juggernaut, yielding less than the 10-year T-note right now. But there’s so much promise from the tech giant out of Cupertino, California, given just how much cash Apple has dumped onto investors in a very short time without even batting an eye.

Apple has returned just more than $200 billion in capital to shareholders in just about five years, which includes an impressive $144 billion in share buybacks starting in 2013.

The number we care most about, of course, is the dividend. It’s not just that Apple has shelled out $51 billion in distributions since it initiated a regular dividend in 2012 – it’s how the company has gone about it. The first payout was 38 cents per share on a split-adjusted basis, and since then, the dividend has grown 50% to its current payout of 57 cents quarterly. That includes a roughly 10% increase in late April 2016.

Apple is expected to hike its dividend alongside its fiscal second-quarter report in April. And as long as AAPL sports metrics like $27 billion in operating cash flow for fiscal Q1, projected gross margins of 38%-39% for fiscal Q2 and a slim payout ratio of about 25%, you can expect the iPhone maker to generously fatten its payout for years to come.

Apple (AAPL) Is a Young But Voracious Dividend Grower 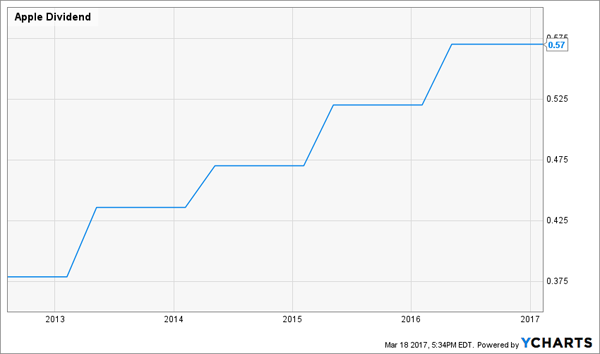 Johnson & Johnson (JNJ) has been counted out more times than … well, than I can count. However, time and time again, JNJ has recovered from disaster, be it the 1982 Chicago Tylenol murders, recalls for bits of plastic in its infant Motrin or death linked to J&J’s baby powder and other talc products.

Part of JNJ’s resilience comes from its long-standing dividend improvement. The consumer products and healthcare company has increased its quarterly dividend for 54 consecutive years, putting it among the best-known Dividend Aristocrats. These aren’t exactly token increases, either, with the payout growing more than 30% in the past five years.

Johnson & Johnson typically announces its regular uptick in late April, which means No. 55 is in sight. 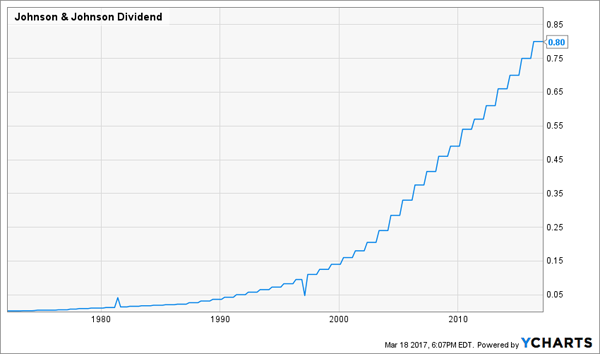 Tanger Factory Outlet Centers (SKT) is one of a handful of retail-oriented real estate investment trust (REIT) that focuses on the outlet store format. Tanger’s profile currently boasts ownership or ownership interest in “44 upscale outlet shopping centers and one additional center currently under construction” across 22 states and Canada.

A 1-2 punch of rate-hike expectations and woes across the retail sector have weighed on sentiment across retail REITs, and Tanger is no exception, off about 10%. But SKT is giving investors plenty of reasons for confidence, including an end-of-2016 occupancy rate of 97.7% — higher than 2015’s 97.5%, and 2014’s 97.4%. Moreover, that price dip has knocked SKT’s price-to-FFO ratio to a very reasonable 13.5, while elevating its yield to 4%.

Expect that payout to get better again in the next few weeks, as Tanger tends to announce a dividend hike very early in April, and has faithfully upped its regular distribution every year since coming public in 2013.

Its last increase was a doozy, some 14% to its current payout of 32.5 cents quarterly. With that, SKT’s dividend has grown roughly 55% in just five years.

Tanger’s (SKT) Dividend Shows That Retail Can Still Pay Off 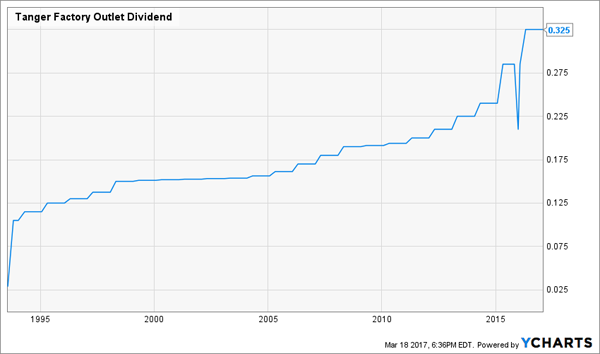 Venerable utility Southern Co (SO) has long been a widows-and-orphan stock thanks to its regulated, monopolistic business and a long history of reliable dividends. The company has paid a regular distribution since 1948, and has improved upon that payout for 15 consecutive years.

Southern and other utility stocks have pulled back from their mid-2016 highs, and SO specifically still sits about 8% to 9% off those points – that has helped sweeten the yield a little, and presented a better buying point for new money.

Like most utilities, Southern’s charm is in its predictability. You know to expect slow, steady increases in the top and bottom lines over time, with very little volatility. And with Southern, you know to expect a 1.75-cent boost to the quarterly dividend every year(that’s been the exact amount of each hike since 2008), and you know to expect the announcement to come sometime in early to mid-April.

Southern Co. (SO) Is as Consistent as They Come 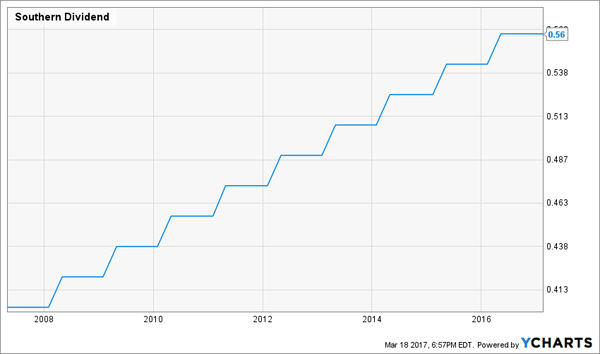 If you’re looking for big dividend growth and big dividend yield, you’ve reached the pot at the end of the rainbow.

AmeriGas Partners L.P. (APU) is an energy-related master limited partnership, sure, and that’s bound to raise a few eyebrows with investors unfamiliar with this name. But APU is a little something different.

AmeriGas markets and distributes propane in every state across roughly 2,100 distribution locations. It sticks out because of its relative niche – whereas most energy MLPs deal in oil and natural gas, which are widely used in most urbanized parts of the country, AmeriGas is heavily entrenched across rural America, where natural gas lines tend not to reach.

While APU did fall rapidly alongside most other energy MLPs throughout 2015 – propane prices weren’t immune to the broad decline in energy prices – it has since recovered and is again trading at pre-dip prices. In fact, APU has mostly traded in a range between $50 and $40 since 2010.

Most of AmeriGas’ returns come from its sweet 8%-plus distribution, which has been upgraded on a regular basis for 12 consecutive years. If you’re looking to get in before APU’s next improvement, you have about a month or so – AmeriGas typically announces its distribution hikes in late April. 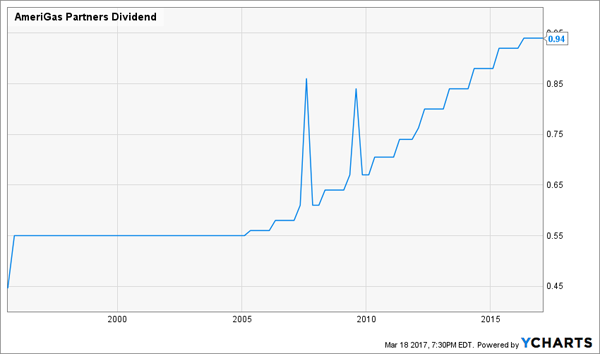 I can’t preach the virtues of dividend growth enough. That’s precisely why it plays such a pivotal role in my “No Withdrawal” retirement portfolio.

If you want to actually enjoy life in retirement, you’ll need a lot more than stagnant yields on stocks that go nowhere. In fact, yields that never inch higher can be a sign of serious issues for your holdings. That’s why the only way to be “safe” isn’t to hunker down into boring blue-chips with no upside potential. Believe it or not, to be safe, you must focus on growth. But I don’t just mean growth in the business – I mean growth in the dividend.

Think about it this way: If you invest in blue chips that yield 2% or 3% a year, barely grow revenues and only pad their payouts by a token amount each year, you’re likely not even keeping up with inflation, and you’re probably seeing returns of just 3% or 4% annual returns. On a million-dollar nest egg, that’s just $30,000 to $40,000 a year.

You and I both know better.

That’s why I’ve buried my head in the books to compile a “No Withdrawal” retirement portfolio – a set of buy-and-hold picks that generate from 6% up into double-digit yields, and some of which even have 7% to 15% upside in annual capital gains. That means you can live off dividend income alone without ever touching your nest egg, but if disaster does strike, you’ve grown your retirement account enough that you can dip in without crippling your well-laid plans.