When blue chips get too popular – like the five I’m going to show you today – these “safe stocks” can actually be dangerous to continue holding in your portfolio.

The problem with blue-chip stocks? Call it the “Curse of the Dow.” The Curse says a stock that joins the Dow Jones Industrial Average will essentially hit a wall, underperforming in the ensuing months compared to how it performed before ascension. It’s not perfect, but it’s close – since 1999, 15 of 16 stocks that have joined the Dow have averaged 1% gains over the next six months, but averaged 11% gains in the six months before inclusion.

Why? There are a few factors, but one of the most prevailing is that by the point a stock has joined the Dow, it’s typically nearing the end of its growth ramp and reaching the slower-growth “mature” part of the business cycle.

The same reasoning can be applied to many blue-chip stocks. A stock typically starts to be considered a blue chip after a long period of sustained growth, even if that growth begins to slow – and after that, a company never really loses the blue chip designation as long as the business doesn’t crumble.

The following five stocks are the worst kind of blue chips. They’re not crumbling, but it’d be better if they were — because then the decision to leave them would be far more obvious. Instead, these large-caps tantalize investors with their stability and slightly above-average dividends, keeping investors just long enough to weigh them down with underperformance.

Make no mistake: Keeping your money invested in these blue-chip losers is a sure way to set your retirement plans back.

Walmart (WMT), on paper, is on a roll right now. It’s churned out 34% gains in the past 18 months to more than double the broader market, including an 11% move higher this year.

But we second-level income investors know that we don’t make money investing on headlines.

Walmart’s rip-roaring run has only served to bring shares back into the range they traded in from mid-2012 through most of 2014. In other words, WMT has been dead money for buy-and-hold investors over the past five years.

And WMT’s dividend growth argument is running on fumes, as you can see by the firm’s paltry 2% hike in February. The big reason? Amazon.com (AMZN) continues to eat into the retailer’s brick-and-mortar business: 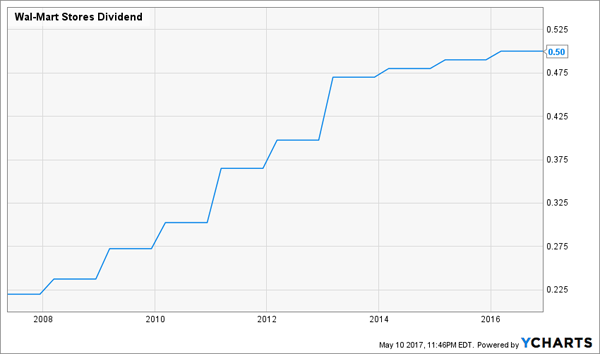 Kellogg (K) is always going to be a popular widows-and-orphans pick because of the seemingly unshakable nature of its business. It’s a consumer staple, and it sells the kinds of breakfast foods that you and I (and our kids) have been eating for years – Special K, Frosted Flakes, Eggo waffles and Pop-Tarts.

But cereal sales have been in decline for years amid several issues, including many people simply forgoing traditional breakfast amid busier schedules, and others are opting for more healthy choices.

Kellogg has tried to pivot in a few ways, such as delving into products like protein shakes and turning up the volume on NutriGrain and other breakfast bars, but the writing is on the income statement. While the company is managing to right-size its way to modest profit growth, revenues have steadily declined for years, for a total of 12% erosion since the end of 2013 alone.

With “Peak Cereal” behind us, Kellogg is a big sell. 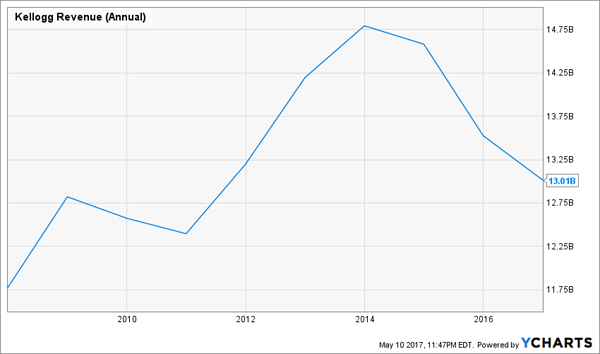 General Mills (GIS) is a more diversified food producer than Kellogg, but it’s in the same sinking boat. Profits are middling, and revenues have steadily leaked out for years. In fact, the company recently suffered its seventh consecutive quarter of sales declines, and the company sees the top line shrinking 4% this year.

Yes, General Mills is more than its ubiquitous cereal brands like Trix, Total and Wheaties – it also has Totino’s Pizza Rolls, Fruit by the Foot fruit snacks and Annie’s-brand organic foods after its $820 million purchase back in 2014.

Ironically, investors briefly thought they’d get a quick payday earlier this month when buyout buzz circulated about a potential sale to 3G, but that was quickly snuffed out. 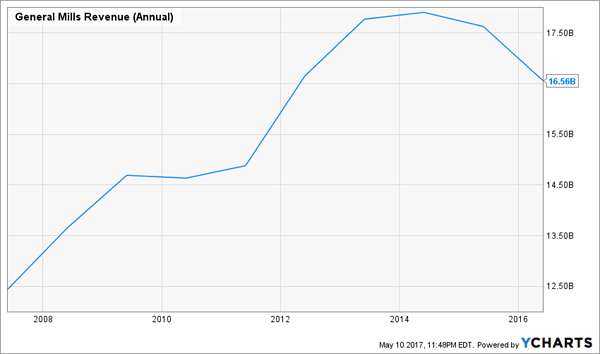 International Business Machines (IBM) is perhaps the easiest bear case of all.

Warren Buffett just shaved Berkshire Hathaway’s (BRK.B) stake in Big Blue by a third, wisely lessening his exposure to a tech company that has been rangebound since 2010. And why not? This is a technology company that has posted 20 consecutive quarters of year-over-year revenue losses.

We were sold the promise of Watson for years, but for all of its technical innovation, it’s struggling to be a real powerhouse where it counts – the bottom line. And IBM needs all the profits it can get, considering net income has sunk 30% since 2013.

IBM deserves credit for growing its dividend, but a tech stock simply can’t tread water for the better part of a decade. Boot Big Blue.

Big Blue Is a Big Disappointment 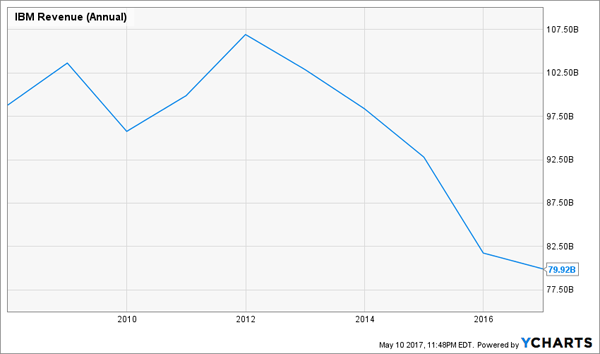 Ford (F) might be one of the most frustrating stocks on the market.

Value investors keep getting sucked into this money hole thanks to eye-poppingly low metrics like its current forward P/E of less than 7 and its slim 0.3 PEG. Pair those with a 5%-plus dividend, and it’s hard not to see the allure. Heck, you can almost forgive the fact that Ford hasn’t increased its payout since the start of 2015 considering Ford has made amends with a pair of early-year special dividends in 2016 and 2017.

But Ford’s growth is glacial, and while it’s plenty profitable, they’re variable in nature with no real trend higher. Analysts expect more of the same from the bottom line this year and next, on revenues expected to merely inch higher in 2017 and 2018.

And longer-term, Ford is staring some unpleasant trends in the face. Driverless car technology is bringing new faces into the automotive game, such as Alphabet (GOOGL). Meanwhile, car-buying trends among millennials, while not catastrophic, aren’t promising. Far fewer young people have driver’s licenses than in the past, and many millennials have had to push car purchases down the road for simple affordability reasons. 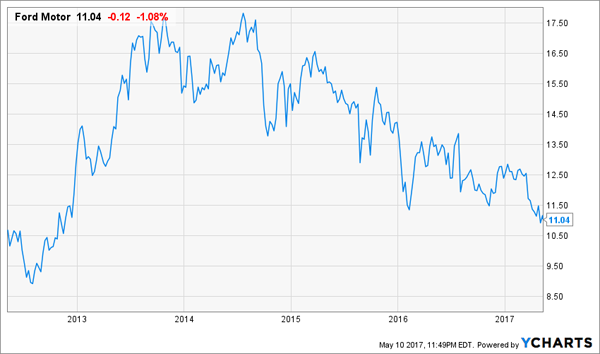 Most pundits that talk about so-called “retirement stocks” will point you in the direction of no-growth blue chips like the stocks we just discussed. Many of them typically yield 3%, maybe 4% if you’re lucky. But if you do the math, you won’t like what you see. Think about it: Even if you’ve saved up $500,000 for retirement, 4% annually is just $20,000 a year.

You and I both know that even with Social Security tucked in there, that’s not a comfortable retirement.

If you want to retire the way you’ve planned to for decades, you need the 8% across-the-board yields and strong growth potential of my “No Withdrawal” portfolio.

This portfolio is a basket of “triple threat” stocks that offer the three things every retirement portfolio must have to keep you comfortable for years on end: big headline yield, dividend growth and the potential for capital gains.

If you have that, then you can literally fund your retirement on dividends alone.

I’ve spent months researching high-yield stocks looking for the ultimate dividend plays that deliver everything we need to build a successful retirement portfolio. I had to weed out numerous value traps and yield traps, but the time was worth it because it resulted in this can’t-miss “No Withdrawal” retirement portfolio, featuring:

These three critical elements will allow you to not only live off dividend income alone, but also grow your nest egg in retirement!

That’s because the 8% yield across the board right now will balloon to double-digit “yields on cost” thanks to the dividend growth potential of these winning picks. That will ensure you have every cent of income possible to pay the bills and have plenty left over to enjoy life. Meanwhile, your nest egg will continue to grow – an often overlooked but essential part of retirement, because someday you might need to pay for a big one-time expense, whether it’s an emergency or just buying a vacation home.

This all-star portfolio features the absolute best of several high-income assets, from preferred stocks to REITs to closed-end funds and more. That means diversification and continued payouts regardless of how volatile or bearish the stock market becomes.

Let me show you the path to a no-worry retirement. Click here and I’ll provide you with THREE special reports that show you the path to building a “No Withdrawal” portfolio. You’ll get the names, tickers, buy prices and full analysis of their wealth-building potential!