Fact: When interest rates rise, you need to be in dividend-growth stocks.

Proof: They’ve handily beaten the S&P 500 in the 17 months since the Federal Reserve put the zero-interest-rate era on ice.

In just a moment, I’ll show you 2 terrific off-the-radar dividend-growth plays to snap up now—and 2 surprising blue chips you’ll want to keep well away from your nest egg.

First, take a look at how the iShares Core Dividend-Growth ETF (DGRO) has performed vs. the SPDR S&P 500 ETF (SPY) on a total-return basis since December 16, 2015, the day Janet Yellen raised rates for the first time in nine years.

The Dividend-Growth Edge in 1 Chart 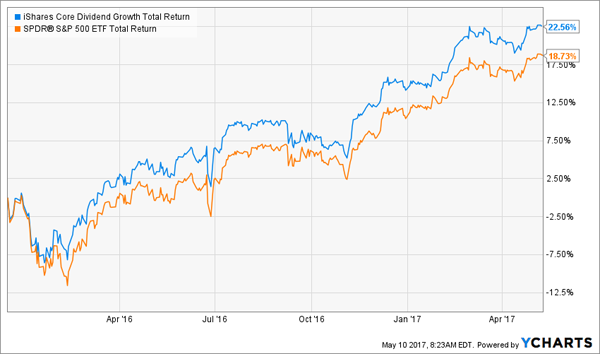 This is exactly why dividend-growers must hold pride of place in your portfolio: their rising payouts yank in buyers. And when the market takes a swan dive, you get some nice downside protection, as most folks keep a death grip on their favorite dividend growers no matter what.

You can see that in DGRO’s climb, which is smoother and steadier than SPY’s.

Most first-level investors stop here and pull the trigger on DGRO. Too bad that’s the first step to leaving money on the table—potentially a lot of money.

After all, why wouldn’t you buy DGRO when the fees are a pittance, at 0.08% of assets, and the portfolio seems nicely spread out across the major sectors, adding a nice margin of safety?

So what’s not to like? Quite a bit, actually.

Let’s take that P/E figure first. Even though DGRO’s overall ratio is less than that of the benchmark index, the fund is still going to hand you some overbought names mixed in with the bargains. That’s a major pitfall of passive investing, as my colleague Michael Foster wrote in an article back in February.

Microsoft, DGRO’s No. 2 holding, sports a nosebleed P/E of 30.1 after running up 34% in the past year. The software giant also pays out 65% of its earnings as dividends, which doesn’t mean it’s about to sideswipe us with a dividend cut, but it could weigh down payout growth, especially if earnings take a hit.

No. 3 holding Exxon is far worse, with a P/E of 34.4 and a payout ratio of 125%. That’s right—the oil giant is paying more in dividends than it’s earning!

Where’s it getting the cash? It’s borrowing it, of course. Take a look at what’s happened to Exxon’s long-term debt in the last four years. 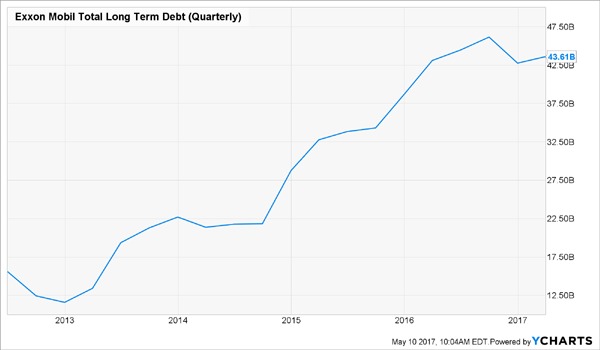 How We’ll Beat the Passive Crowd

I’m not saying these two holdings will take down DGRO—not even close. But I am saying that with a bit of research, we can kick out pricey dividend laggards like MSFT and XOM and position ourselves for bigger gains and more income than folks who simply buy a dividend-growth ETF and call it a day.

Hotel operator Wyndham Worldwide (WYN) sports a dividend yield of just 2.2%, a number that’s ranged from 1.4% to 3.0% in the last five years. 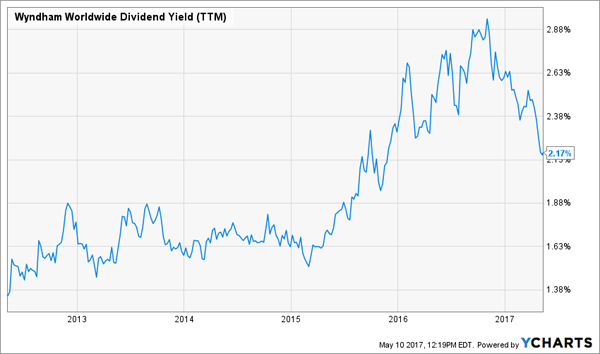 A 2.2% payout isn’t enough to get your average dividend fan’s heart racing. But focusing solely on current yield is another first-level mistake, because it’s the yield on your original buy that really counts.

Here’s what I mean: Let’s say you bought WYN five years ago. Today, thanks to management’s relentless dividend hikes (the quarterly payout’s up 152% in that time), you’d be yielding a nice 4.1%, on your original investment.

Better yet, the dividend has pulled Wyndham’s share price up with it! 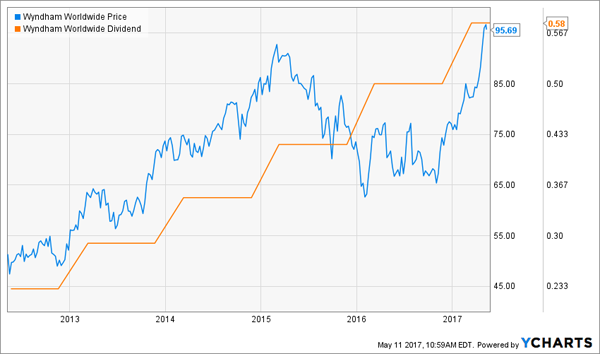 But you wouldn’t know that from the current yield, because the herd has bid up WYN’s share price with each payout hike, keeping the current yield more or less stable (because you calculate yield by dividing the annual dividend into the current price).

The stock is up nearly 4% after WYN reported better-than expected first-quarter earnings on April 26. But don’t worry, you still have a window to get in on the next five years of dividend-driven upside: WYN’s payout ratio is an ultra-safe 35%, and its P/E is still a reasonable 15.9, well below Marriott International (MAR), at 37.3, and Hyatt Hotels (H), at 32.1.

The kicker? Wyndham CEO Steve Holmes hinted on the latest earnings call that the company may be setting up to spin off its timeshare business. That could be a boon for shareholders: according to a 2012 Credit Suisse study, spinoffs and parents tend to outperform the S&P 500 by a wide margin in the 12 months following a split.

Don’t tap the brakes now, because there’s still value here, and the stage is set for a big dividend hike in August to give the title insurer’s stock an extra kick.

How do I know? Because FAF last announced a payout hike in August 2016, and it was the company’s biggest since 2014.

FAF’s Dividend: Movin’ on Up 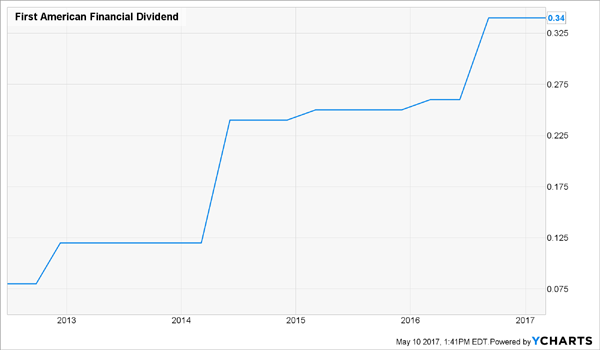 History could easily repeat, because First American’s payout ratio is just 40% and its earnings are soaring, giving management more cash to put in our pockets: 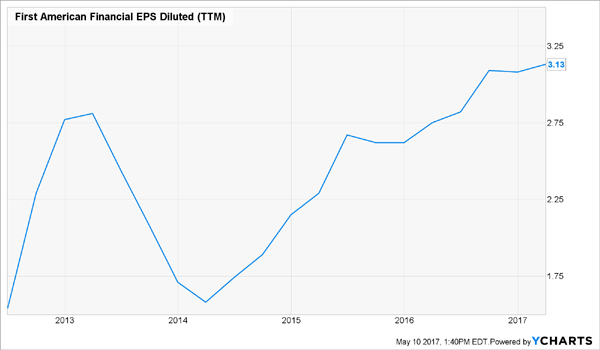 FAF might seem a strange recommendation as rates rise, as it’s essentially a bet on the housing market. But that still looks like a solid wager, and two more rate hikes this year (which is what futures traders expect) won’t hurt—and could even drive up—near-term demand.

In March, existing home sales jumped 4.4%, easily beating the 2.5% economists expected. Inventory is still tight, but rising prices should get more sellers off the fence, while continued job growth keeps buyers in the game.

Finally, you can still get in on FAF at a reasonable P/E of 13.3, which helps offset the unpredictability of the housing market. So does FAF’s nice 3.2% dividend yield.

Wyndham is far from the only stock investors are missing because they’re fixating on dividend yield … when dividend growth is the real number to watch.

Because as we’ve just seen, dividend growth is the No. 1 predictor of share-price gains.

When you combine it with two other factors: a bargain valuation and share buybacks (which cut the share count and boost earnings per share), you get a stock that has little choice but to head skyward!

Look what happened with one of my other favorites—Boeing (BA)—which I urged subscribers of my Hidden Yields service to buy a year ago, when it traded at a ridiculously low 12-times free cash flow.

Boeing management had already seen the opportunity and was going all-in, buying back Boeing stock left and right—and hiking the dividend as they went.

It’s a move I’ve seen savvy managers make time and again: wait for the stock’s valuation to fall way out of line … make some timely buybacks … then hike the dividend to grab the herd’s attention.

So did it work? Of course it did.

The chart I’m about to show you is the clearest indicator I’ve ever seen of the locked-in relationship between share price and dividend growth—with buybacks throwing in an extra “kick” for good measure: 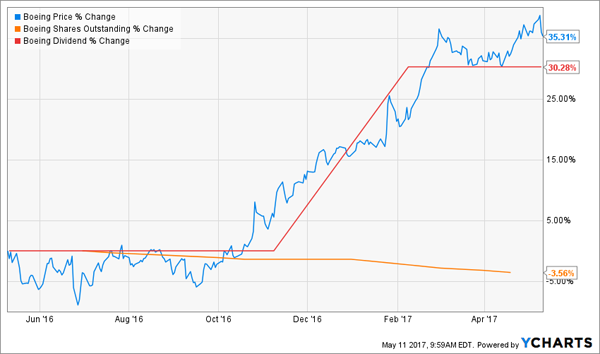 Boeing’s climb was great news for folks who saw what was coming and jumped in, but unfortunately the stock’s huge run has pushed over my target price, so if you’re not in by now, you’re too late on this one.

But that’s not the case with 7 other stocks I’ve just released in a new FREE report called “The 7 Best Dividend-Growth Stocks With 100%+ Upside.”

It reveals the “next 7 Boeings”: stocks you can buy now and hold for the long haul. As their buybacks keep rolling and their payouts spike, you can sit back and watch as their share prices are forced steadily higher.

Add it all up, and you can easily haul in a safe 12%, year in and year out, for life, with these growth rockets!

Don’t miss out. Go right here for all the details on my breakthrough strategy and get your FREE copy of this just-released report today.