3 Risks That Can Kill Your Profits in CEFs (and Cost You 10% Dividends, Too)

American novelist William Faulkner once said, “In writing, you must kill your darlings”. It was a warning to other writers not to get too attached to their manuscripts, or their characters, because you always need to be willing to edit and cut down your work to make it truly brilliant.

That advice applies to investing, too. I’ve seen too many investors get emotionally attached to their stocks and funds, which causes them to hold on to losers for too long—or fail to accept that the world has changed. But if we want to minimize our losses (and of course, we always do!), we sometimes need to “kill our darlings,” too.

Falling in love with investments is an especially dangerous trap with high-yield plays like closed-end funds (CEFs), as folks get so enamored with CEFs’ 7%+ dividends that they fail to (or maybe pretend not to) notice when the wind shifts and it’s clearly time to sell.

A little more than a decade ago, I made a contrarian move into this fund, which yielded around 12% then and pays a still-outsized 10.8% today, after the subprime mortgage crisis turned a lot of mainstream investors off of MBSs. These folks were suffering from something called “recency bias,” but the truth was, MBSs had actually become fairly safe after they triggered the collapse of the US housing market (and economy).

For half a decade after 2009, PHK posted terrific returns:

When Times Were Good 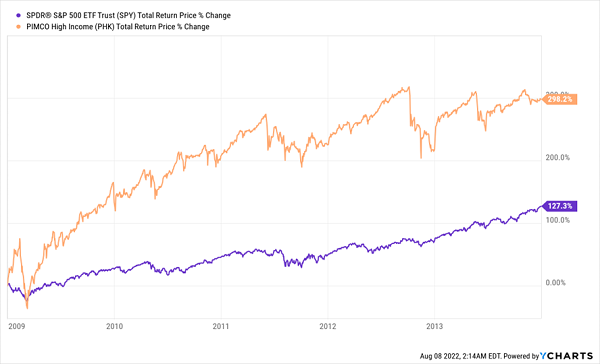 Of course, times change, and now I wouldn’t buy PHK even if it traded at a huge discount to net asset value (NAV, or the value of the investments in its portfolio). And here’s a spoiler alert: it doesn’t. I recommend you avoid it, as well. Here’s why.

I never like buying a CEF at a premium to NAV, but right after the 2008/’09 crisis, I made an exception for PHK, as I rightly thought it had upside as scarred investors were too negative on the potential of MBSs. The problem is that the fund still trades at a premium. But while its premium once made sense, it no longer does (for reasons I’ll explain in a bit). 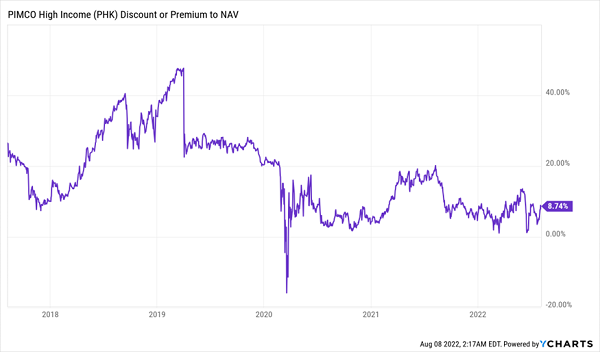 A CEF with a sustained premium isn’t necessarily a bad buy, although you’ll generally want to buy a fund that typically trades at a premium during those rare moments when it’s at a discount (or at least when its premium dips below its long-term average).

What you don’t want is a fund that once traded at a high premium that is seeing its premium consistently fall over time. That’s typically a sign that stubborn investors are unwilling to give up on a once-market star that’s turned into a dud. And that’s exactly what PHK is now, which we can clearly see when we look at …

The secret to PHK’s success a decade ago was its payout, which, as I mentioned a second ago, yielded a consistent 12% (or more) back then. But then PHK cut its dividend for the first time in 2015, which shocked the CEF world, as the fund’s payout had been rock-solid for a decade, and had been buttressed by massive special payouts in the pre–Great Recession days, too.

PHK’s Dividend Was Reliable, Until It Wasn’t 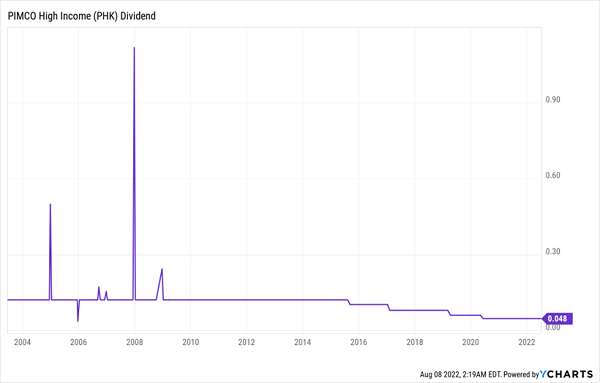 Since then, PHK has cut its payout several times as it repeatedly failed to sustain its massive yield. And its current 10.8% payout also looks unsustainable, as the fund doesn’t earn enough to keep doling out those payouts without selling off the investments in its portfolio (thereby hurting its value and shriveling the income it brings in).

Which brings us to…

PHK’s big returns were a thing of beauty a decade ago, but lately they’ve been a different story. Compare the chart at the top of this article, showing PHK’s returns from 2009 through 2013, to this one, showing the last five years. 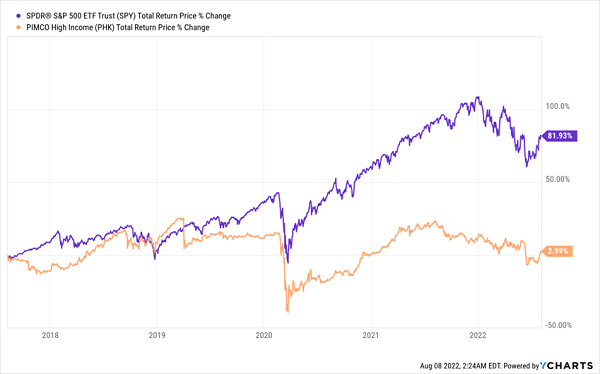 It isn’t just that PHK is underperforming, it’s that it’s not going anywhere! Holding a portfolio of high-yield bonds to get basically zero profit for years is unacceptable, especially when there are dozens of bond CEFs yielding 7%+ that have performed well over the same period, and with much better upside potential in the years to come.

I’ve assembled a “mini-portfolio” of 5 CEFs that are terrific buys in this rate-panicked market: these smartly run funds trade at such deep discounts that I’m calling for 20%+ price gains from each of them in the next 12 months. PLUS they yield an average of 8.6% today.

I’m ready to share all of my research on these 5 “inflation-proof,” “recession-proof” buys with you now.

You and I both know that a Treasury or CD will never rival a CEF throwing off an 8.6% dividend. (And that’s just the average yield on these 5 funds, by the way. Some pay even more).

That’s why I expect a wave of income-hungry investors to storm into these 5 high-yielding (and often monthly paying) CEFs, especially with today’s surging inflation outpacing the yields on just about every other investment out there.

Let’s take this opportunity to “front run” this crowd. Click here and I’ll give you my full CEF investing strategy, plus VIP access to a breakthrough Special Report naming all 5 of these overlooked 8.6%-yielding funds.

These 5 CEFs, with their discount valuations and outsized dividends, could make a huge difference in your retirement portfolio, and I don’t want you to be without them. Learn all about them now.