The Best Dividend Defense Stock for 2022

It’s a bull market in military budgets, to put it lightly. So, let’s talk about my favorite defense stock dividend for the rest of 2022 and, really, the 2020s.

We are, however, only one of nine NATO countries to spend 2% or more of our GDP on military spending. This has been a stated goal of NATO since 2006, a standard currently met by less than one-third of members.

With Russia’s invasion of Ukraine entering its sixth month and China lobbing missiles over Taiwan last weekend, higher military spending across the globe is on the way. It’s unfortunate.

But as your dividend guy, I know my role. You’re reading this column for an income idea. Well, here’s the stock that is going to soar with the next set of war games.

As usual we look past the popular names to pull L3Harris Technologies (LHX). It’s a payer that may have you scratching your head because, on the surface, LHX never appears to yield much.

This may sound unremarkable to “first-level” income investors. The lack of sizzle is their loss and our future gain.

We contrarians demand a “next-level” edge. (Renowned value investor Howard Marks, chief of Oaktree Capital Group with $120 billion under management, introduced the second-level concept in his excellent book The Most Important Thing: Uncommon Sense for the Thoughtful Investor.)

While the first-level types were sleeping downstairs, they were missing the action in the payout penthouse. Dividend growth of 409% powered price growth of… wait for it… 393%. The orange dividend line below acted as a “magnet” that pulled this share price higher: 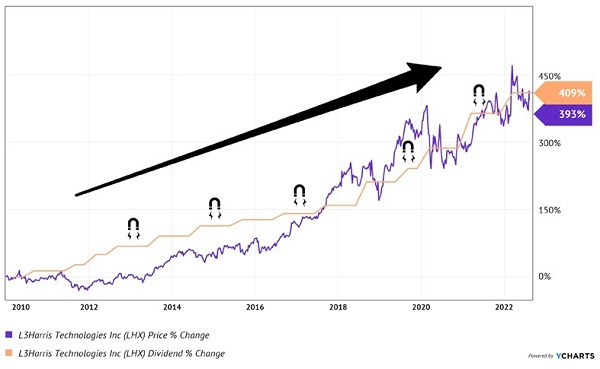 This type of payout growth is especially impressive given that most of this time frame was geopolitically calm. With mega-power tensions on the rise, LHX is going to benefit from the inevitable increases in defense spending that are going to cascade across the globe.

Now it’s time for second-level thinkers to take the elevator up one more floor. At this third level, we contrarians look for hidden catalysts that will spark near-term gains. Here’s what will light the fuse under this stock sooner rather than later.

I’ll give you a hint: More tensions in the Pacific.

The current edition of L3Harris was formed on June 29, 2019, when L3 Technologies merged with the Harris Corporation. Their marriage created one of the world’s largest defense contractors with a portfolio of products for air, land, sea and even space applications.

LHX, to put it bluntly, makes what the US needs to compete with China militarily.

For example, China now has the world’s largest navy, at least with respect to the number of ships. The US Navy has taken note and recently awarded LHX a contract worth up to $380 million to modernize the mechanical and electrical systems on naval ships in the Asia Pacific and Middle East regions.

Meanwhile, up in the air, LHX was awarded a $117 million contract to provide avionics for US Space Force launches. (For you Netflix watchers, I do not believe actor Steve Carell is involved.)

LHX should receive more ink as investors begin to look for plays ahead of the next set of military exercises or cross-border incursion. It’s an undercover play because its 1.9% yield looks paltry. But let’s not be fooled—the real value in LHX is hidden in the growth of its dividend.

With 10%+ increases likely for the foreseeable future, LHX’s share price is likely to track its payout higher. Remember, this stock rarely yields more than 2% at any given time. That’s because its price is constantly being pulled higher by its dividend, which acts as a “magnet” that basically guarantees gains over any long time frame. Hike the dividend + yield the stays the same = stock price up.

And c’mon, if shares can deliver 393% total returns during a mostly tranquil 12.5-year period, what are they going to do between now and 2035 in a world of more conflict? Probably soar and make Steve Carell beam.

Bull or bear, LHX shareholders really don’t care. This is the kind of recession-resistant dividend we contrarians want to own in the rocky months ahead. Click here and I’ll explain how to find these types of 15%+ yearly total returns.