Today I want to show you a beaten-down sector that has a long history of crushing the market—and 4 funds that should be on your radar now.

These 4 funds are a great place to pocket dividends up to 10.9% (or $10,900 a year on a $100k investment) while you wait for the market to realize that it’s discounting their industry far too much.

I’m talking about 4 standout fund buys from the biotech sector.

Biotech has fallen over 10% from its 2018 high and is now down a bit more than the broader market. Just look at the iShares Nasdaq Biotechnology ETF (IBB) vs. the SPDR S&P 500 ETF (SPY). 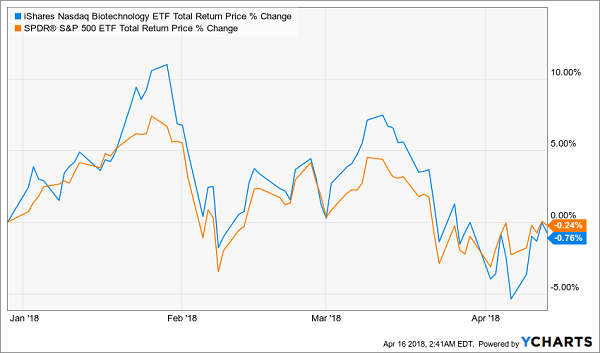 Scared first-level thinkers might see this and worry the trend is against them—but zoom out over the last decade and you’ll see that biotech is a big winner.

Doubling Up the Market 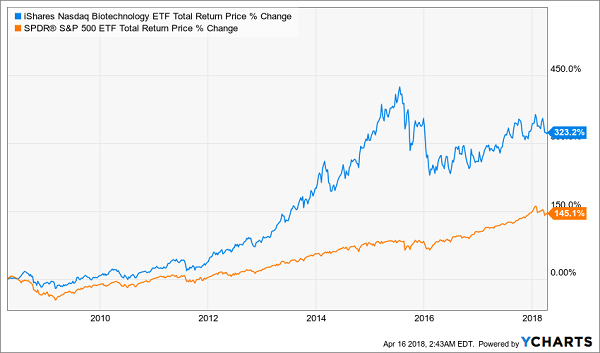 With a huge and time-tested outperformance, why wouldn’t you take a look at biotechnology? The sector is vital to humankind—we will always look for drugs and technologies to extend and improve our lives—which means biotech isn’t going away.

Unlike some of the technologies developed in Silicon Valley, biotech is rarely frivolous—which means it attracts serious money all the time.

GILD is on the forefront of HIV therapies and since the mid-1990s has developed a number of drugs that combat the disease. The market has rewarded the company for its efforts. 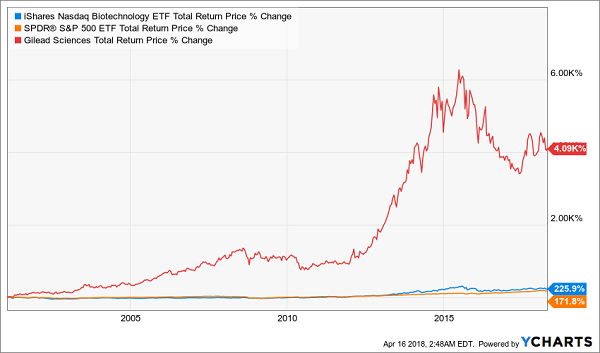 IBB (the blue line here) and SPY (the orange line) are hardly visible next to the soaring red line representing GILD stock, which is up over 4,000% since 2001. And if we go back to its 1992 IPO, we see that GILD has even crushed Apple (AAPL). 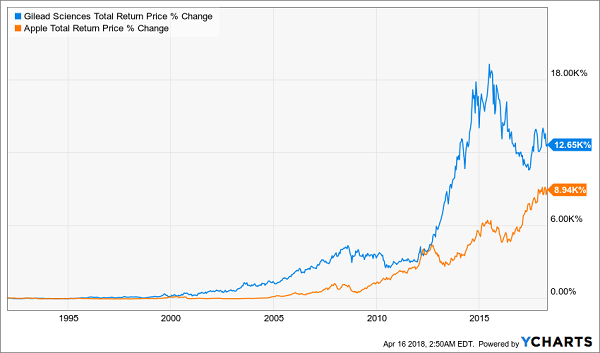 Such massive gains are possible in biotech because these companies literally save lives. And the companies that produce the drugs of tomorrow will provide investors with unthinkable returns over the long haul.

The Problem With Biotech

There’s just one issue with biotech stocks: they’re often an all-or-nothing bet. Especially if they’re small caps, a lot of biotech companies’ futures hinge on just one or two drugs. If they fail to take off, that stock will go to zero.

If GILD had failed in producing HIV-fighting therapies, it probably wouldn’t be around today. And failures are common. According to the Boston Globe, nine out of 10 companies that begin clinical trials never bring a drug to market. If those companies can’t do so before their seed funding runs out, they’ll shut down and their stocks will be worthless.

That’s why actively managed biotech funds—those with an experienced manager in charge—tend to beat the index.

For instance, Tekla Healthcare Investors (HQH) and Tekla Life Science Investors (HQL) are two actively managed funds that have been beating IBB since the index fund was established in 2001. Compare the blue and red lines in the chart below to IBB, in orange:

The Human Edge in Action 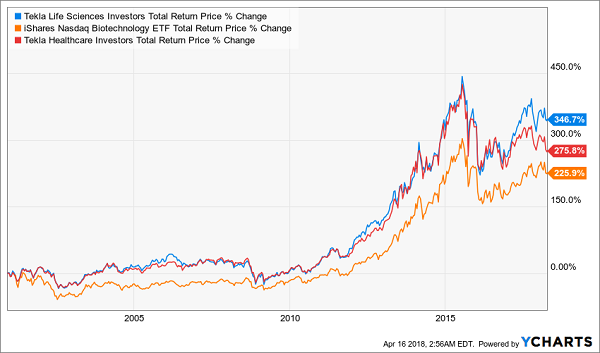 Go back to when HQH was first established in 1998 and we see that these funds have posted even bigger gains—780% on average. 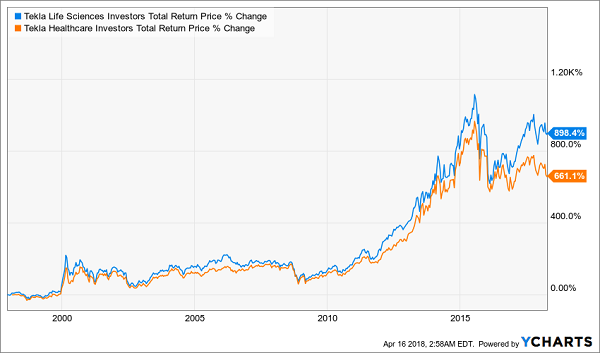 The secret? Tekla hires medical researchers and biotech experts to carefully examine the potential of the firms they invest in.

The company has released two funds that are newer than HQH and HQL, with a more global focus: the Tekla Healthcare Opportunities Fund (THQ) and the Tekla World Healthcare Fund (THW). But since these funds are only three years old, they’ve only yielded modest returns so far, making them an attractive speculative play on biotech because you’re getting Tekla’s expertise in two new funds just as they’re starting.

Tekla’s New Funds Yet to Take Off 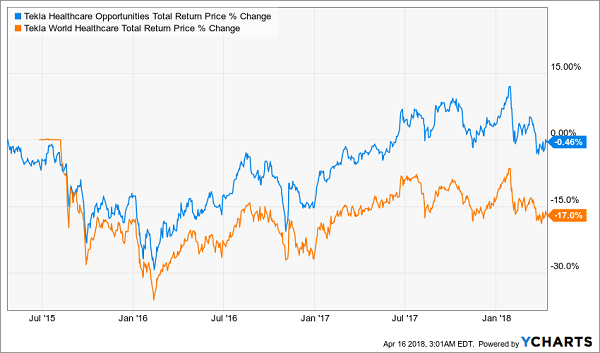 And I haven’t even gotten to the best part: income.

All four of these funds focus on giving shareholders a high income stream as well as capital gains. Right now, they throw off between 8.2% and 10.9% in income—which is a king’s ransom compared to the pathetic 0.2% IBB pays:

If you buy IBB and wait for the market to come back to biotech, you’ll get pretty much nothing while you wait. But with the Tekla funds, you’ll get a high income stream—which makes the waiting that much easier.

Just Released: The 8.2% Dividends Wall Street Hides From You

Just a week ago, I released my 5 hottest fund picks—and I want to show them to you now.

They have a lot in common with the 4 funds we just discussed, but with one crucial difference: they’re not simply funds to consider now—they’re the top 5 names I urge you to BUY right away!

Each of these 5 unsung funds throws off safe, and massive, dividend payouts—I’m talking an average 8.2% in CASH, with one of these beauties even handing you an outsized 10%.

I know those payouts are similar to what you’d get from our biotech plays, but these 5 buys invest in stocks from across sectors and include technology, industrial, financial services companies and, yes, biotech firms.

That gives your hard-earned nest egg an extra layer of protection in a downturn.

What’s more, each and every one of these 5 funds trades at a massive—and totally unusual—discount to their “true” value (and by that I mean the value of the holdings in each fund’s portfolio).

The bottom line is this: Those weird markdowns simply can’t last, and we’re looking at easy 28%+ upside in the next year as they revert to “normal.”

Wall Street: “Pay no attention to the man behind the curtain”

Funny thing is, you won’t hear a whisper about these 5 obscure wealth builders from Wall Street. They’d much rather steer you into an ETF, like IBB or SPY.

It’s a lot easier for them, because they don’t have to do a smidgen of research, and they get paid anyway.

That’s great for them, but terrible for you.

Because if you follow their “advice,” you’ll be stuck “grinding it out” on the pathetic sub-2% dividends many ETFs dribble out today. That’s no way to fund your retirement, and it’s exactly why I rolled out these 5 incredible 8.2%-paying funds now.

I can’t wait to show them to you. All you have to do is CLICK HERE to get instant access to the name, ticker symbol, buy-under price and my complete research on every single one of these 5 cash machines!