Business development companies (BDCs) are the kings of yield right now, and it’s not even close. As I write, the average yield in the space is 9.5%, and more than half of all publicly traded BDCs boast a yield in the double digits.

That’s thanks to a long drubbing among these companies – but for the first time in a while, things are starting to look up in this high-yield arena. And right now, I have my eye on three glimmers of hope in the space that are throwing off 9% to 10% dividends.

2017 was a downright dreadful year for BDCs, which managed to even underperform bonds despite their high yields. (Reason being, their prices dropped faster than they paid dividends!)

And 2018-to-date hasn’t been much better, with the VanEck Vectors BDC Income ETF (BIZD) off about 4% versus a flat market. That said, the bleeding has slowed over the past month or so as Washington, D.C., has extended a helping hand. 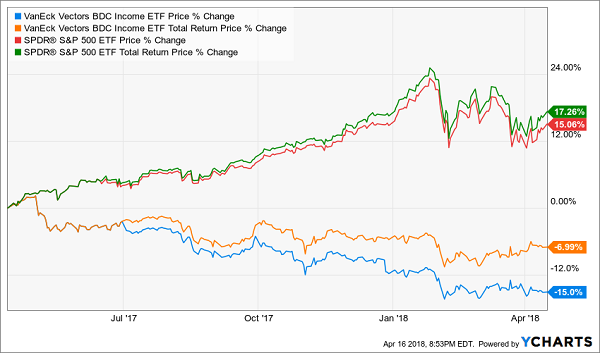 President Donald Trump recently signed a spending bill that included a provision – the Small Business Credit Availability Act – allowing business development companies to double their leverage from $1 for every $1 in equity to $2 for every $1.

Translation: These firms now have a lot more cheap money to play with. Which is key, because they borrow cash and lend it out at higher rates, pocketing the spread. The more money they’re able to bank a “spread on”, the more dividends they can pay you and me.

Ares Capital (ARCC) is one BDC that has pushed its boards to implement plans under the new act. Management is quite bullish on the cheap money:

“We believe this legislation can significantly enhance our growth opportunities by permitting us to invest in a segment of the middle market comprised of lower risk and lower yielding loans that were previously not economic for Ares Capital,” Ares CEO Kipp deVeer says.

Which BDCs are positioned to benefit the most? Here are three with yields up to 10% that could lead this sector from the dividend outhouse to the payout penthouse:

TPG Specialty Lending (TSLX) provides financing to middle-market companies with an enterprise value of $10 million to $250 million, in transactions ranging from $15 million to $350 million. Its industry spread is wide, from dollar stores to chiropractic firms to education to manufacturing, and its portfolio includes some notable brands, including Eddie Bauer, 99 Cent Only Stores and Tangoe.

The company’s net interest income has been exploding for years, and 2017 – reported just a couple months ago – was no exception. The company logged $120.3 million in NII – a 12% year-over-year improvement. On a per-share basis, NII of $2 easily covered its full-year base dividend of $1.56. But the company also throws off a variable supplemental dividend each quarter, and for 2017, that meant an additional 22 cents per share. Based on today’s prices, the base and supplemental dividends combine for a roughly 10% yield!

Goldman Sachs BDC (GSBD) provides financing for middle-market companies via secured debt, unsecured debt and occasionally even equity investments, and naturally, the big draw here is that it is managed by Goldman Sachs (GS) and thus benefits from the expertise of the giant investment bank.

The BDC focuses on deals of between $10 million and $75 million, but other than that, it doesn’t have much of a stated bias. Portfolio industries run the gamut, from software to defense to specialty retail to healthcare. A few interest holdings include the likes of top American ice supplier Reddy Ice, compliance software provider Smarsh and diversified chemicals specialist DuBois Chemicals.

Its fourth-quarter earnings report wasn’t exactly stirring. Its 47 cents per share in net interest income, while enough to cover its 45-cent quarterly payout, was off 3 cents from the prior year’s result.  Still, there were bright spots; for instance, net funded portfolio growth was $83.6 million versus the prior year’s $34.4 million.

What does interest me about GSBD, however, is that 96% of its investment portfolio is floating-rate in nature, which means that it’s set up for success as long as the Federal Reserve plans to keep hiking the benchmark rate (and it does). Dividend coverage has been more than sufficient for several years, and thanks to a roughly 25% drubbing over the past year, shares are very, very close to trading at their NAV (net asset value). 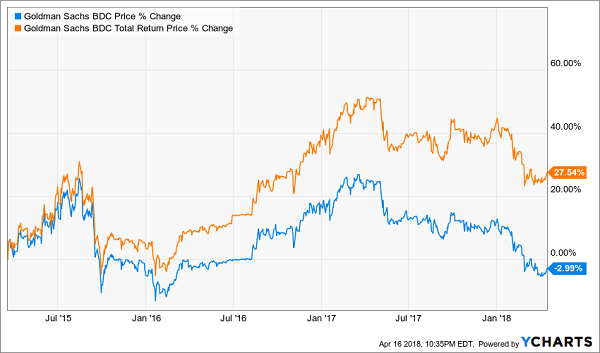 Hercules Capital (HTGC) is a business development company that primarily focuses on financing solutions of anywhere between $1 million and $100 million for companies in the technology, life sciences and sustainability/renewability spaces.

Hercules offers growth capital and asset-based financing, and even has options for initial public offerings, mergers & acquisitions and public companies. Thus, unlike many BDCs that specialize in financing smaller unknowns, Hercules’ portfolio includes some real brand power, including the likes of Ancestry.com, Trulia, Pinterest and Plug Power (PLUG).

But perhaps the most interesting thing about Hercules Capital was a miniature implosion the stock suffered in spring of last year.

In early May, Hercules announced that it would transition to using external management – a move the company believed would add appeal to the biotech and technology companies it deals with, but also a move that adds on management costs and tamps down profits, which ultimately costs shareholders. That caused a quick double-digit drop in HTGC – a move that alarmed the company so much that just a few days later, it pulled a 180 and announced that it would “expand its review” of its business structure.

Shares have never quite rebounded to their previous highs, but they’re also not much worse off than the rest of the BDC sector since then. Meanwhile, Hercules is putting together a bullish operational case.

I can’t exactly call Hercules’ shares a “value” given that they still trade at a 20% premium to NAV. However, given that about a year ago, they were trading at closer to a 50% premium, it is safe to say that HTGC has worked off a considerable amount of froth.

While these three BDCs are showing glimmers of hope, the industry still has several hurdles to get past to prove itself and gain the trust of high-income hunters. Right now, I think investors are better off looking in three other corners of the income world.

You won’t hear about them on CNBC, or read about them in the Wall Street Journal, because they don’t buy advertising like Fidelity and other firms.

But their relative obscurity is great news for us 8% dividend seekers.