Business development companies (BDCs) are one of the market’s top sources of yield. Unfortunately for income hunters, in 2017, this industry also was one of Wall Street’s greatest sources of disappointment.

I don’t say that to condemn the BDC space. I say that as a warning: While these financiers of small and midsize businesses can occasionally be excellent long-term holdings, there are plenty of landmines to avoid. That’s why today, I want to highlight three such funds that have mouthwatering yields of up to 12% – each of which might look attractive at first glance, but only one of which looks like a safe buy right now.

2017: You Were Better Off in Bonds Than BDCs 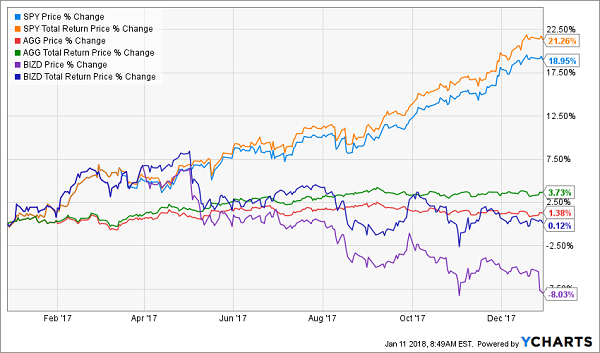 The main exchange-traded fund in the space, the VanEck Vectors BDC Income ETF (BIZD), barely broke even last year, and that’s after factoring in more than 8 percentage points’ worth of returns from dividends! Forget the broader stock market, which crushed the industry – even investors who ducked for cover in a boring, blended basket of bonds like the iShares Core U.S. Aggregate Bond ETF (AGG) came out smelling better than those holding BDC funds.

Some of the problems have been industry-wide, such as an increasingly competitive market more making loans. Some have been more on a case-by-case basis, such as BDCs stretching to provide financing to lower-quality companies than normal.

Whatever the case may be, BDCs aren’t a set-it-and-forget-it industry. Investors that want to lasso the magnificent fields in this space have to be discerning, as even some 8%-10% yields haven’t been enough to cover losses. So, let’s take a look at three BDCs doling out up to 12% in dividends, and separate the traps from the treasures.

I visited BlackRock Capital Investment Corporation (BKCC) just a couple of months ago, but it’s worth highlighting once again just because of how alluring this dividend trap looks right now.

BlackRock Capital Investment Corporation is the old BlackRock Kelso Capital Corporation (hence the BKCC ticker), which was founded in 2005 to provide financing to middle-market companies. It typically makes investments of between $10 million and $50 million, primarily via senior secured debt (~60% of portfolio), though it also offers solutions via subordinated/unsecured debt, preferred equity, common equity and “other.”

And while BKCC is a diversified operator unafraid of any sector, it does lean heaviest toward financial companies, which comprise 26% of the portfolio. Still, the rest of its holdings run the gamut, from chemicals to defense to healthcare.

It sounds good from 10,000 feet, but BlackRock Capital has been an operational mess that’s been in decline for the past four years. In fact, since we panned it in November, it has lost another 10% compared to (and contributing to) a 5% drop for the BIZD.

This isn’t a change in sentiment or the market just not realizing BKCC’s potential. The company’s top line has declined by 21% since 2012, and net investment income has fared even worse, off 27%. That has forced BKCC into a pair of dividend cuts over the past half-decade, including one announced early in 2017.

Yes, the nearly 12% yield is simply mouth-watering, but it’s only a byproduct of perpetual decline. 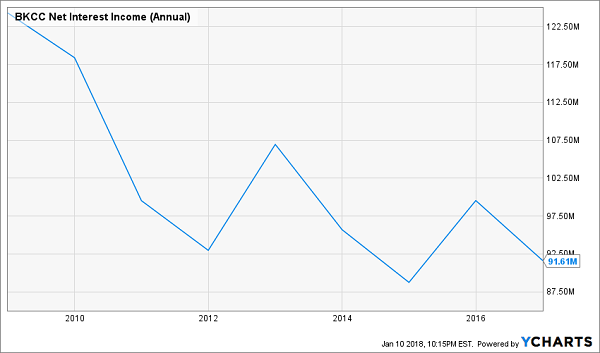 TPG Specialty Lending (TSLX) is a relatively new BDC that got its start in July 2011 and hit the markets with an initial public offering in 2014, and has been a pleasant surprise ever since.

Meanwhile, it operates in a number of industries, from manufacturing to healthcare to business services, with a couple smaller specialties including education and royalty-related businesses. And while TPG has a number of up-and-coming smaller companies in its investment portfolio, it also has provided financing to some well-known companies, such as Eddie Bauer, Sears (SHLD), 99 Cent Only Stores and Tangoe.

The icing on the cake of this BDC? It introduced a formulaic variable supplemental dividend in 2017, and through three quarters, it had doled out 19 cents per share in these additional payouts. That translates into an additional percentage point of yield, meaning that if the company acts similarly in the future, investors should enjoy a total yield of north of 9%!

Main Street Capital (MAIN) is a Houston-based operator that provides capital solutions to lower middle market companies, as well as debt financing to middle market companies. And it has, simply put, been one of the best BDCs on the market for some time. Over the past five years, MAIN shares have delivered an 82% total return – roughly four times better than the BIZD. 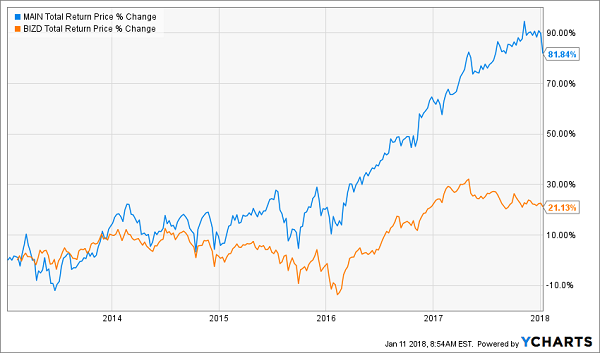 Credit an outstanding growth ramp that has seen net investment income just explode in the past half-decade, from $59 million in 2012 to nearly $116 million last year. That has come from a keen eye for success stories throughout MAIN’s history, including investments in Quanta Services (PWR) and US Concrete (USCR) during the BDC’s nascent years.

However, if there were ever a time to hit the pause button on Main Street Capital, it might be now.

The company announced Jan. 3 that Vince Foster will be stepping down as CEO to executive chairman while COO and President Dwayne L. Hyzak takes over the chief’s role – a transition that’s expected to take place in Q4 2018. The news sent the stock down by more than 4% in a week, which doesn’t sound drastic, but is one of the company’s worst such quick moves in the past couple years.

While Hyzak clearly knows Main Street through and through, and Foster still will be providing some input from his executive chairman position, the BDC very well could end up missing Foster in the daily operation of the company.

Caution should be exercised amid any such switch involving such a long-tenured executive, but that goes doubly for Main Street, which has built exceedingly high expectations … and a gaudy valuation as a result. At 166% of NAV, MAIN’s price is the steepest in the BDC space.

The call on MAIN right now is “hold.” Main Street itself hasn’t shown any signs of slipping, and Foster will be on for a few more quarters. But new money has no business paying a sky-high premium for an executive transition.

Safer 8% Yields Than BDCs: How to Retire on Dividends Alone

Big, fat dividends certainly are part of the formula for a winning retirement portfolio, but if you invest looking at nothing but headline yield, you could end up watching your holdings crumple under the weight of unsustainable payouts and massive capital losses.

That’s what happens when you go for broke blindly chasing yield. You go broke.

However, with the right set of holdings, you can build yourself an elite portfolio that will allow you to live comfortably throughout your retirement – and without ever cracking your nest egg. But it takes more than dividend traps like BKCC. It takes the “triple threat” stocks in my 8%-yielding “No Withdrawal” retirement portfolio sure can!

The problem with a 12% yield like BKCC’s is that it’s not the only number in the equation. You also have to consider the capital losses it keeps suffering because it can’t keep its act together. But say you’re still netting out 4% gains each year – that sounds nice, but 4% returns on a nest egg of a half a million dollars will only generate $20,000 in annual income.

Do you really think you’ll be kicking back and enjoying retirement on $20,00 a year?

This “ultimate” dividend portfolio provides the three things you need most as you plan out life after work:

This all-star cluster of stocks features the very best of several high-income assets, from preferred stocks to REITs to closed-end funds and more, that combine for a yield of more than 8%. That means you won’t have to scrape by on meager blue-chip returns and Social Security checks.

Live off dividend alone without ever touching your nest egg. I can show you how. Click here and I’ll provide you with THREE special reports that show you how to build this “No Withdrawal” portfolio. You’ll get the names, tickers, buy prices and full analysis of their wealth-building potential – and it’s absolutely FREE!