Everybody likes a sale, but there’s a significant difference between something that’s a value, and something that’s merely cheap – a good value can last you years and even decades, where something cheap can leave you in the lurch within a few months.

The same can be said for several enticing double-digit yields right now. I’m about to introduce you to five 10%-yielding dividend stocks, all of which boast low prices in the single digits. But that doesn’t make them all good deals.

We all know that nominal share price typically doesn’t mean much – what makes a stock “cheap” is its price compared to metrics such as earnings, sales, free cash flow and other operational measures. But at a certain (low) point, price does start to play a factor in how a stock is viewed.

Many institutional investors – including mutual funds and ETFs – draw a line in the sand at $10 per share, refusing to buy any stock that trades in single digits.

That’s important because institutional buyers can create something of a floor for a stock, which means once a stock falls below $10, it can start to lose that market prop. The same can be said for the $5 mark, below which other institutional investors will refuse to buy.

In other words, stocks under $10 aren’t necessarily flawed because they’re so cheap – and in fact, some of them are excellent value candidates just waiting to bounce back. But single-digit stocks tend to reflect companies at some level of distress, and a lack of institutional interest doesn’t help their cases.

That’s why investors delving in any uber-cheap stocks must be diligent in assessing everything – all the warts – before buying. That goes doubly for stocks with dividends of north of 10%, as low share prices combined with sky-high yields can be a sign of a troubled stock.

Here’s a look at five such stocks that all look alluring thanks to low prices and elevated payouts … but some of which are disasters in the making.

Back in October, I warned against CBL & Associates (CBL) – a real estate investment trust that invests in malls, as well as “community centers” that involve retail, yes, but also dining and entertainment. The company is in the midst of trying to redefine itself, and this year’s results haven’t exactly been promising. I mentioned at the time that while the dividend was covered by adjusted funds from operations, the payout has stalled, AFFO was slipping and portfolio occupancy was on the decline.

CBL cut its dividend from $1.06 annually to just 80 cents – the only reason CBL’s yield is higher now than it was then is because Wall Street has given the stock a 30% haircut since then. AFFO was off 12.3% in the third quarter, to 50 cents per share, and the company’s net income is now off about 27% year-to-date. Portfolio occupancy at least ticked higher sequentially, by 150 basis points to 93.1%, but that’s still off from the year-ago quarter.

CEO Stephen Lebovitz said that “revenues were impacted by additional bankruptcies, store closures and rent concession,” which is the wider story in retail real estate right now. While CBL’s dividend cut helps the company save cash, it still hasn’t solved the problem that is plaguing its industry. Until it does, CBL is nothing more than a yield trap.

BlackRock Capital Investment Corporation (BKCC) is a business development company that provides middle-market companies with various avenues of financing, including senior and junior secured debt (roughly 60% of the portfolio), subordinated/unsecured debt (16%) and other means.

BKCC’s typical investment will be anywhere between $10 million and $50 million, and it will invest across a wide array of industries – finance (26%) is the biggest slice of the pie, but it also holds companies in chemicals, energy, business services and environmental industries, among others.

BlackRock Capital shares a name and relations with investment management giant BlackRock (BLK), but that’s about it – it certainly doesn’t share its success. BKCC has been in a steady decline since 2013, including a 4% drop in 2017 amid a red-hot broader market.

Its struggles are illustrated by its third-quarter earnings, which included a 4.4% sequential drop in net asset value, as well as net investment income of just 17 cents per share – a penny shy of its quarterly distribution. That was affected by interest from outstanding convertible notes, as well as markdowns in legacy investments.

It’s part of a broader half-decade downtrend that has forced BKCC’s hand into not one but two dividend cuts, including one enacted at the beginning of this year. In fact, the last time BlackRock Capital paid out this little, it was recovering from the 2007-09 financial crisis and bear market.

With few signs of improvement to point to, BKCC’s dividend seems much more likely to stagnate or shrink than bounce back. 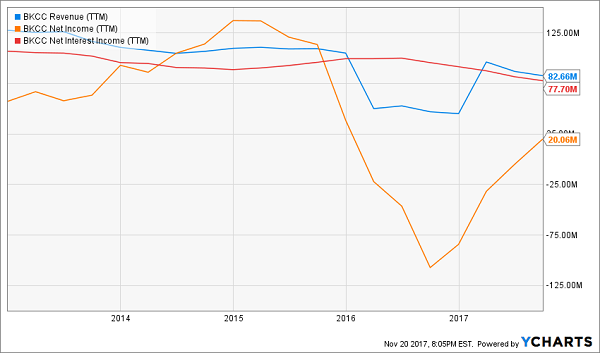 A little fun with math: If Frontier was paying its previous $1.58 out at today’s prices, it would be yielding more than 90%!

Sadly, this entertaining dividend train wreck has to end sooner than later.

While Frontier has long been troubled, the start of the current avalanche can be traced back to 2015, when it spent $10.54 billion on wireline, broadband and other assets from Verizon (VZ) to bolster its business. Since then, however, service delays and angry customers have become the norm, and actual performance has come far shy of the growth that Frontier projected at the time of the acquisition. Meanwhile, its debt has exploded to $17.6 billion – more than five times its current equity.

Frontier cut its dividend earlier this year to preserve cash, but given the company’s operational forecasts, it’s clear that the company needs plenty to go right to continue tackle debt that’s maturing over the next couple years. Worse, it has a massive $5.26 billion in bonds coming due in 2022 that it will have to refinance – a difficult task if it’s still hemorrhaging cash to keep income investors happy.

The nice thing about the Allianzgi Convertible & Income Fund II (NCZ) is that its low price isn’t necessarily a sign of immediate danger. That’s because it’s a closed-end fund, rather than a traditional stock, and has traded at $15 or below for its entire publicly traded life. Few institutional holders are worried about its sub-$10 price tag.

The NCZ invests in both domestic convertible securities and junk debt, typically seeking to be about 50% weighted in convertibles; at the moment, it’s actually closer to about 55%. The risk from the high-yield aspect of the portfolio is meted a bit thanks to short maturities, with half its debt at one to five years, and another quarter in five to 10. And like many closed-end funds, NCZ uses leverage – about 40% right now – to help juice its income, as well as its overall performance.

NCZ has tended to benefit from a rising-rate environment, which explains its broad malaise since its 2003 IPO. The fund even lowered its distribution in 2015 to adjust to the ultra-low-rate environment. However, the fund has bounced back over the past couple years, and its generous distributions have helped its admittedly volatile performance maintain an edge over other popular bond products.

Allianz’s NCZ Throws Some Fits, But Gets the Job Done 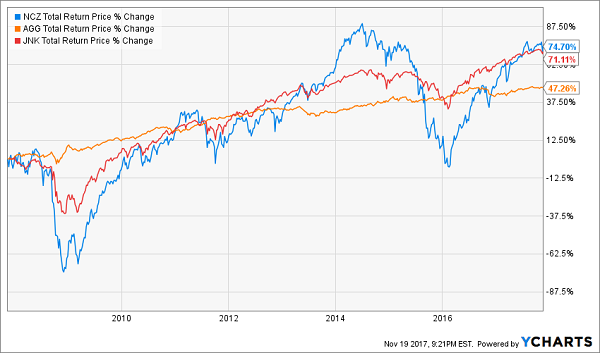 If you’ve been to a theater run by AMC Entertainment (AMC), Cinemark (CNK) or Regal Entertainment (RGC), among others, you know National CineMedia (NCMI) – likely through it’s “Noovie” (previously “First Look”) brand. NCMI is the company behind pre-preview previews, replete with ads and 60-second “inside looks” that essentially double as glorified advertisements. As much as we might hate it, however, these shows give advertisers access to a captive audience in front of a giant screen.

Business has been lousy in 2017, however – so much so that the company plunged in May after warning of a very difficult environment for much of this year. NCMI shares, in fact, are off 60%, helping drive the yield from a still-attractive 6.5% at the beginning of the year to more than 15% at the moment.

How safe is the yield? Well, the company stopped raising it in 2012, and the company has paid out 66 cents through three quarters of 2017, despite having collected just a dime in profits – off 44% year-over-year – during the same time span. At the same time, National CineMedia operates a low-capex, high-cash business, and from a cash perspective, the dividend isn’t in immediate danger.

And NCMI’s operational performance is disturbing – it comes amid 2017’s box office on pace to come in higher than three of the past five years. That’s because ompetition from digital video platforms are eating into the company’s business, as is an increased practice of assigned theater seating, allowing patrons to come in closer to the movie’s start time and avoiding Noovie’s content.

That’s enough to keep me away from NCMI, even at matinee prices.

If you want to get through retirement without ever touching your nest egg, you need more than high yields – you need high-quality yields. Losers like Frontier and National CineMedia won’t come close to cutting it. You need the “triple threat” stocks in my 8%-yielding “No Withdrawal” retirement portfolio for that.

Retirement investing can feel like a zero-sum game: You can have safe but insufficient yields from the likes of Coca-Cola or Kellogg, or you have to chase high yields in the junkyard, where underperformance eats away at those dividends. Either way, you’re dooming yourself to a lower quality of retirement than what you’ve worked so hard for.

But my “No Withdrawal” portfolio ensures that you won’t have to settle during the most important years of your life.

I’ve put together an all-star portfolio that allows you to collect an 8% yield, while growing your nest egg – an important aspect of retirement investing that most other strategies leave out.