What if I told you that you could reap huge dividends (I’m talking life-changing 15% payouts) and quick upside from … the weather?

I’m talking about the bone-chilling polar vortex, which, especially if you live on the US east coast, probably already has you feeling winter weary—and we’re only in mid-January.

I’ll show you 3 beaten-down funds at the center of our “polar-vortex profit plan” in a moment. But first, here are the raw numbers behind this opportunity for income and gains.

A Heat Map for Frigid Times

Since it’s freezing outside, it makes sense to warm our hearts with a heat map—and there’s no better heat map than the one for the S&P 500. Take a look at this overview of each S&P 500 sector’s performance. You’ll clearly see one standout: 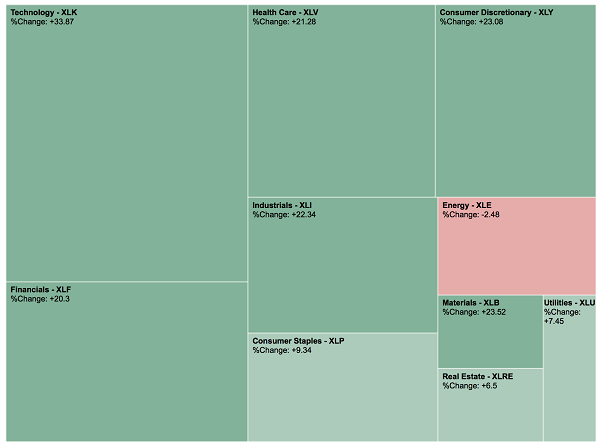 There’s no doubt 2017 was a gangbuster year for stocks—the best since 2013, when quantitative easing put the market in overdrive. We don’t have that boost today, but even so, stocks came in with a return of more than 23% for 2017. And it would’ve been higher if it not for energy. (To get a look at my forecast for 2018—and 10 more funds poised to make big comebacks this year, click here.)

What caused energy to fall was the early 2017 slump in natural gas and oil. Natural gas got obliterated last year, with a 27.8% price decline. That’s much worse than oil, which fell over 20% from the start of the year to its worst point: 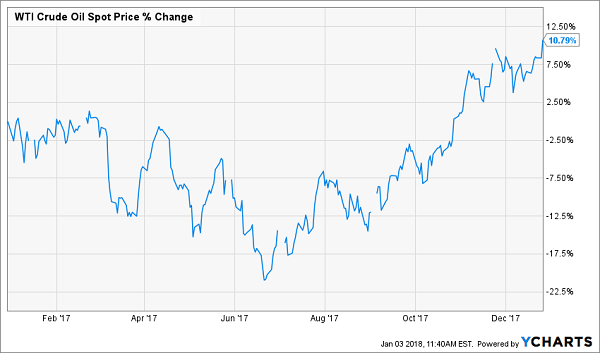 Notice that oil has made a very nice recovery from the middle of 2017 to the end, and closed out the year up 10.8%? Even the ugly decline in natural gas has evaporated—and natural gas futures are up 15% in less than a month, thanks to the recent cold snap.

But that wasn’t enough to lift energy stocks, which stayed in negative territory even when oil recovered: 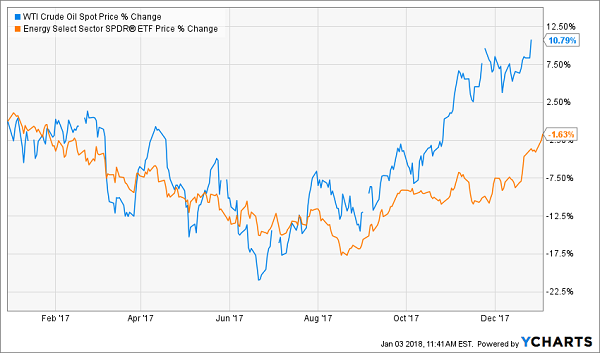 But, as I wrote on December 26, the biggest money isn’t in passive index funds. While the benchmark Energy Select Sector SPDR (XLE) has begun a bit of a recovery, there are 3 other outlandishly beaten down energy funds that are also starting to recover thanks to oil’s recent rise. All 3 are actively managed, and they’re set to rise even faster than XLE as oil tacks higher.

Oh, and these funds pay big dividends—like 15% big. Since XLE only pays a 3.5% dividend, these are an income investor’s delight—which is why you should consider them now.

Before I show you these funds, let me quickly tell you why oil is recovering—and why its recovery isn’t going to stop anytime soon.

The first part of the story is the weather. If you’re in the northeast or Midwest, you’ve already seen the havoc the polar vortex has caused. Sudden below-zero temperatures across America have driven up energy consumption far beyond expectations—and since the cold isn’t likely to ease in the short term, energy demand isn’t going to halt, either.

We’ve been here before. Back in early 2014, just before oil prices collapsed due to overproduction, a cold snap pushed up the commodity, lifting oil stocks higher, too: 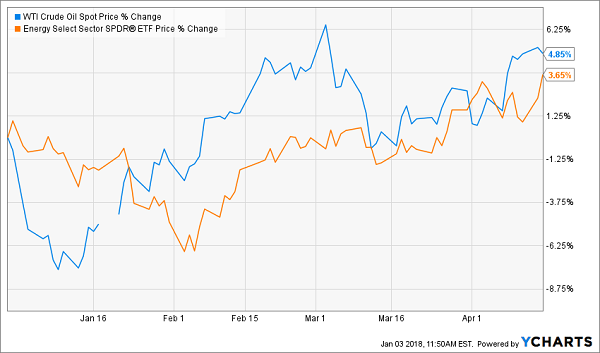 That made for a very easy short-term trade: buy oil stocks, wait until the weather warms up, then sell.

And 2018 is shaping up to offer a very similar short-term opportunity.

But the 2018 opportunity is even better, for two reasons. The first is that the economy now is much better than it was back then. Just look at how jobless claims have collapsed, wages have gone up, and both GDP and corporate profits have steadily risen: 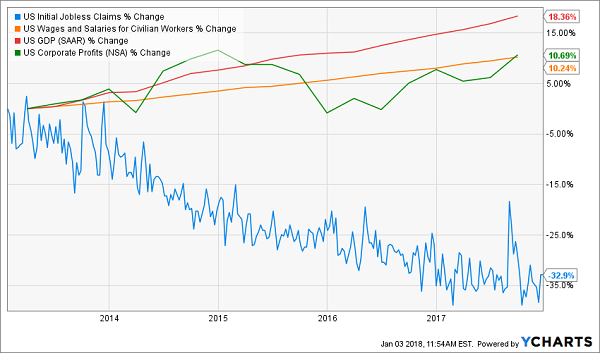 That means Americans are more financially fit, so they’ll be more willing to shell out for more energy during the next cold snap than they were in 2014. And the picture for energy consumption gets even better, because today’s energy prices are still 37% cheaper than they were at the start of 2014: 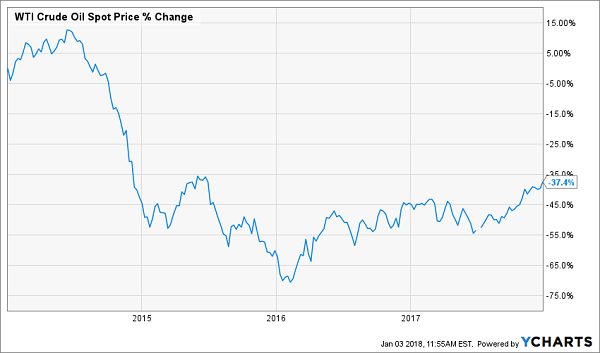 Suddenly, betting on energy stocks has become a no-brainer. But like I said, we’re going to do better than XLE. A lot better.

Because as I mentioned earlier, there are 3 funds—closed-end funds (CEFs), to be precise—paying higher dividends than XLE and are far more beaten down. We can bet on those for higher upside in the short term while holding the option to collect big dividends over the long term.

The first fund to consider is the ClearBridge American Energy MLP Fund (CBA), a midstream energy fund focusing on master limited partnerships, which operate pipelines and oil and gas storage facilities across the US. (And if you’re on the hunt for individual MLPs to buy, check out these 3 picks from my colleague Brett Owens.)

Unlike XLE, which trades around the same as its net asset value (NAV, or what its underlying portfolio is worth), CBA is trading at a 4.4% discount while yielding a whopping 9.7%. That discount means you’re basically getting every dollar of CBA’s assets for a little under $0.96.

On top of CBA, we should also consider the Tortoise Energy Independence Fund (NDP), which trades at a 1.8% discount and offers a monster cash payout to investors: 13.2% in annual dividends.

And finally, there’s the Duff & Phelps Select Energy MLP Fund (DSE). Buy this one now and you’ll lock in the fund’s unthinkable 15% dividend. That is not a typo! This fund is paying out a dividend of 15% on its market price. And while it’s trading at just about its NAV, that monster payout makes it worthy of your consideration if you’re looking to bolster your portfolio’s income stream and oil and gas exposure.

Why should you be paying attention to these funds now? Let’s take a look at their recent performance compared to crude oil and the index—a massive disconnect is obvious.

Why Are These Funds So Cheap? 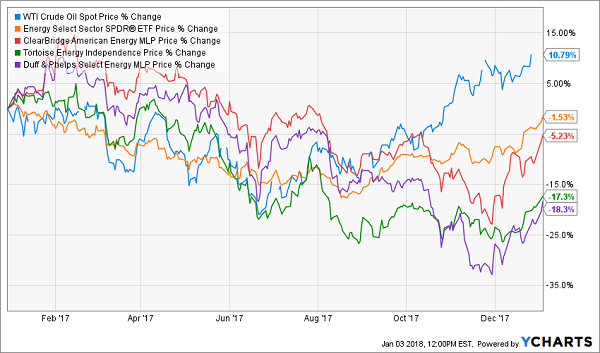 That shows the opportunity we have with these 3 funds: they’ve invested in companies that are directly benefiting from the resurgence in oil and natural gas prices, but their market prices don’t reflect that … yet.

Buying stocks and funds when they’re beaten down is a proven way to build wealth.

Think about it for a moment: how often have you seen one year’s laggard turn around and put in a spectacular performance the next year?

It happens all the time.

One of the most extreme cases is solar module supplier First Solar (FSLR), one of the worst-performing S&P 500 stocks of 2016, with a sickening 51% plunge: 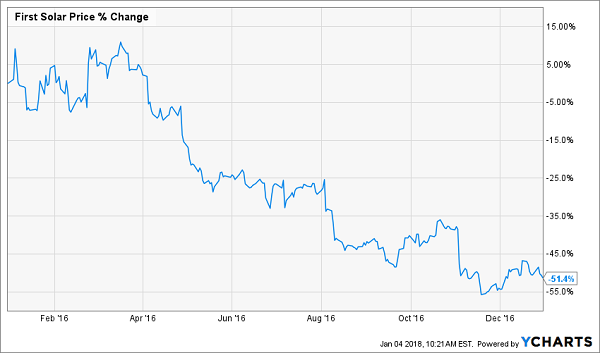 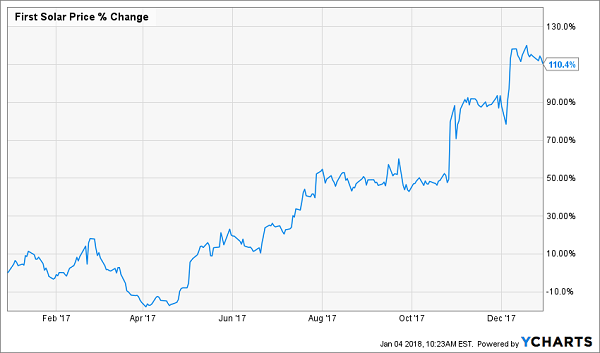 Now I’m not suggesting you buy First Solar. The renewable-power business is far too volatile for this dividend fan’s taste—and the stock pays no dividend at all.

I’m only using FSLR to show you how 2017’s worst sector—oil and gas—is setting up for a similar renaissance. And with the 3 funds I just showed you, you’ll be collecting incredible cash dividends up to 15% while you wait.

But like its renewable-energy cousin, oil and gas is a volatile space, and I know I don’t have to tell you that it’s no place to bet your entire nest egg.

So instead of going “all-in” on energy, I want to show you how you can…

Retire Years Earlier With My 4 Top CEF Buys for 2018

That’s where the diversified set of funds my proprietary 5-point CEF-picking system just released come in. They hand you a safe—and growing—8.1% average dividend! One of these off-the-radar picks even throws off a rock-solid 10% cash payout!

These 4 off-the-radar picks are perfect for retirement (and to pair with your energy buys) because they spread your nest egg across many different asset classes, including US stocks, foreign stocks, real estate and bonds.

That keeps your savings safe while you collect your 8.1% average cash payout!

Best of all, thanks to each of these funds’ outsized discounts to NAV, each one is primed for easy 20% price upside in 2018—including our incredible 10% yielder!

Don’t miss out. Click here to get the full story—names, tickers, buy-under prices and my complete research—on all 4 of these off-the-radar cash machines now.