4 Dividend Stocks Superstar Investors Love – and You Should Too

One of my favorite ways to find new investment ideas is by keeping an eye on what the smartest players in the game are up to. That’s hardly a novel concept. After all, it’s always wise to study the greats – in investing or anything else.

But investors can do more than just watch the smart money; we can see every stock in their portfolios – and we can do it for free.

How? Through Form 13F, which every institutional investor in the U.S. with more than $100 million of assets must file with the Securities and Exchange Commission within 45 days of the end of every quarter. Once they’re in, the SEC posts them on its website, where you can search through them in a snap.

The Smart Way to Use 13Fs

Now you may have heard that 13Fs can be unreliable. After all, the investor in question may have sold some of their stocks in the period leading up to the filing deadline. And 13Fs do only show long positions, ignoring short positions altogether.

But these problems really only apply if you blindly piggyback these investors’ moves. If you view 13Fs for what they are—a snapshot in time and a good place to start digging deeper into a stock—they’re more than worth a look.

With that in mind, here are three standout picks from the latest round of 13Fs (as of the end of the fourth quarter). They’re all bargains—and they’re all shoveling cash back to investors through buybacks, dividends or both.

Honeywell International Inc. (HON) got a big thumbs-up from Ken Griffin, whose Citadel LLC hedge fund boosted its stake by 640% in the fourth quarter. Citadel was a winner in 2015—a year most fund managers would rather forget—with its main funds returning 14%, according to Bloomberg.

A big part of Honeywell’s appeal comes from the huge number of products it makes, from aircraft controls and landing gear to medical equipment. That lets it latch onto growing trends and helps cushion the blow in a downturn. 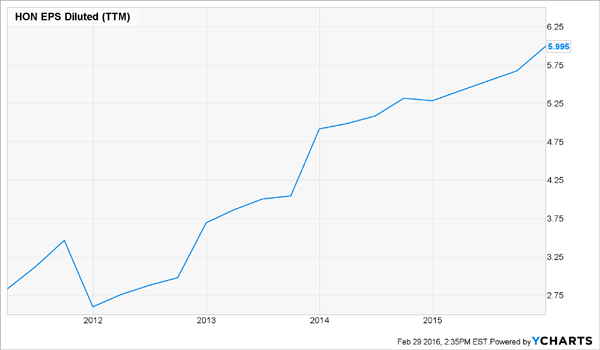 Honeywell has now walked away from its $108-a-share offer for United Technologies Inc. (UTX), after UTX rejected the deal. The combined firm would have supplied most equipment used on airliners, but the upside is that Honeywell’s climb-down dispels uncertainty about whether regulators would have signed off.

Regardless, I still see HON continuing to airdrop industrial-sized dividend hikes onto investors for years to come. The quarterly payout has risen at an average annual rate of 16.2% in the past decade, and the stock yields 2.3%. Honeywell’s payout ratio (or the percentage of earnings paid out as dividends) is just 36.2%, leaving lots of room for more growth.

A Banking Twofer From Buffett

When a stock is Warren Buffett’s top holding, and he gradually adds to it over time, that’s a trend you want to pay attention to. Buffett has now held shares in Wells Fargo & Co. (WFC) for 27 years.

The bank is now Berkshire’s largest holding, sitting 19.8% of the portfolio after Buffett snapped up 9.4 million shares in Q4. He held his interest in US Bancorp (USB) steady, but he gradually bumped it up during 2015.

All of the banks have taken a hit so far in 2016, in part due to worries about exposure to the faltering oil and gas sector.

That could result in credit losses for Wells, which holds $42 billion of oil and gas loans. But I think these fears are overblown, especially if you have a long time horizon. After all, WFC has been in far tougher situations since it was founded 164 years ago and has survived—and even prospered. Just look at 2008, when it took advantage of the meltdown to pounce on distressed lender Wachovia.

But if you are worried about energy exposure, you could go with US Bancorp, which has just 1.2% of its loans tied to oil and gas, compared to 2% for Wells.

Both are among the country’s best-run banks, with efficiency ratios (or costs as a percentage of revenue; the lower, the better) of 57.4% for Wells and 53.9% for US Bancorp, compared to an average of 68.7% for the sector as a whole.

And the selloff has driven their forward P/Es down and their dividend yields up: at 2.6%, USB is yielding more than it has since 2009. Same goes for WFC, at 3.1%. 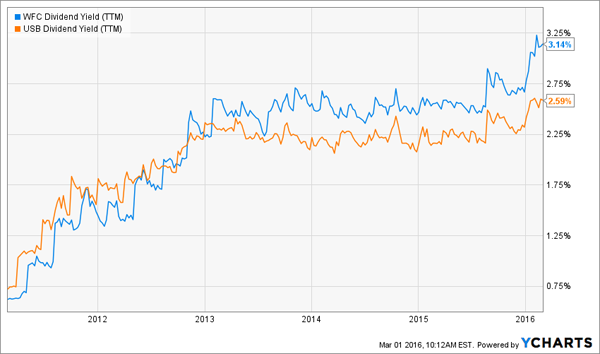 Whirlpool Corp. (WHR) drew the attention of David Tepper’s Appaloosa Management in Q4, with the hedge fund boosting its stake by 42%. Like the honchos of Wells Fargo, Tepper has a history of profiting from distressed companies.

But “distressed” isn’t a word you’d use to describe Whirlpool: in Q4, the appliance maker’s adjusted EPS jumped 16.5%, to $4.10, blowing past the Street’s forecast of $3.91. Sales slipped to $5.56 billion from $6 billion, missing the $5.71 billion analysts were looking for, though sales did rise 4% if you set aside the drag from the strong dollar.

For the full year, free cash flow (FCF) came in at $620 million, nearly tripling the $269 million in dividends WHR paid out, making a cut a remote possibility.

In fact, with the company forecasting a jump to between $700 million and $800 million in FCF in 2016, we could be looking at a big hike a little more than a month from now: in April 2015, WHR announced a 20% payout increase; that came one year after it rolled out a previous 20% boost. The shares yield 2.3%.

To be sure, Whirlpool is feeling the effects of the emerging market slowdown and the strong greenback, but Tepper is clearly betting on continued strength in North America, home to 52% of the company’s sales.

That looks like a sound wager. With Fed fund futures rates pointing to a freeze in interest rates until at least past the end of 2016, mortgage rates will stay low. Add in an unemployment rate that’s sitting at eight-year lows, and America’s housing recovery—from which Whirlpool benefits greatly— should continue.

To top it off, Whirlpool trades at just 9.7 times its forecast 2016 earnings, below its five-year average of 10.7.

Even though these four “guru-approved” stocks look like great buys now, you can pocket even higher yields with three little-known picks I like much more. I’m talking about safe, steady payouts of 6.9%, 7.7% and 8.7%.

What’s driving those sky-high yields? Nothing less than the biggest demographic shift in US history: the aging of America’s 77 million baby boomers. Consider that 10,000 Americans turn 65 every single day—and will continue to do so for the next 15 years.

My three picks provide healthcare to older Americans, and this unstoppable megatrend is already starting to drive their dividend yields higher. Check out the payout growth in my top pick, which raises its dividend every three months:

The upshot: these hidden gems won’t stay hidden for long. So if you make your move now, you’ll start collecting yields north of 8% and position yourself for 15-20% upside in the next 12 months as other investors pile into these reliable dividend-payers.

That’s why I’m urging my subscribers to lock in these juicy dividends today, while they’re still cheap. Discover the names of these three high-income wonders and get your name on the next round of dividend checks now.