Income investors, specifically those invested in stable Real Estate Investment Trusts (REITs), have been able to ignore most of the recent market mayhem. These issues have little exposure to energy prices, and China. Typically, they’re a pure U.S. economic play with stable income streams.

I’ve been a strong advocate of REITs since they became “too cheap” in mid-2015. After all, they’re legally required to pass along at least 90% of their earnings to shareholders. It’s a solid formula for market-beating dividend yields.

Lately, the office REIT group caught my eye. They’ve been overlooked as other segments like housing, storage, and malls have moved strongly.

America is hiring. Over the last three quarters we’ve added anywhere from 149,000 to 295,000 new workers to the national payrolls every month. In the fourth quarter of last year, the average was almost 300,000. 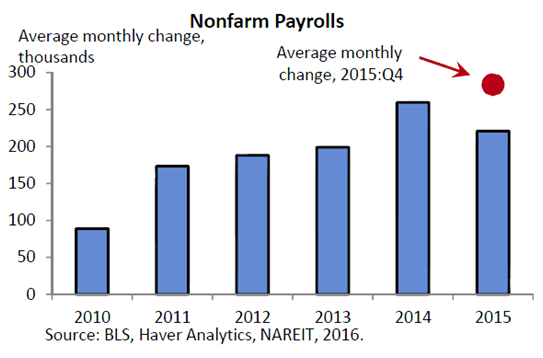 We’re closer to full employment then we’ve been in decades – and those people need to work somewhere. It’s led to a growing demand for office space in most markets across the country. In fact, employers are leasing new space at the fastest pace since the recession. Technology companies are the biggest drivers of this demand. 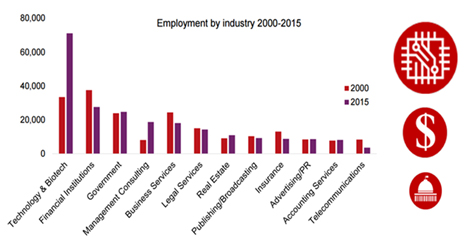 Booming demand has dropped the vacancy rate to 16.3%. That’s the lowest level since 2009. Part of the reason behind the decrease in vacancy has been the number of new properties entering the markets over the past 5 years. 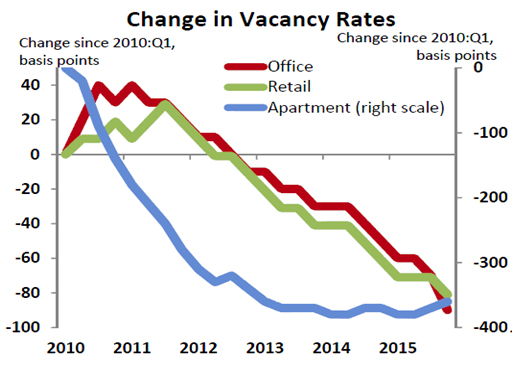 Cities have added some new office capacity since the financial crisis, but not much. Even as increasing larger projects have come on the market, they too are being snapped up quickly. New inventory isn’t making a dent in the demand and in vacancy rates. It’s exactly what we, as potential office REIT investors, want to see.

A Future of Stable and Sustainable Rent Growth

Higher demand and lower inventory are pushing rents up. They’re growing at a 3.3% annual rate. 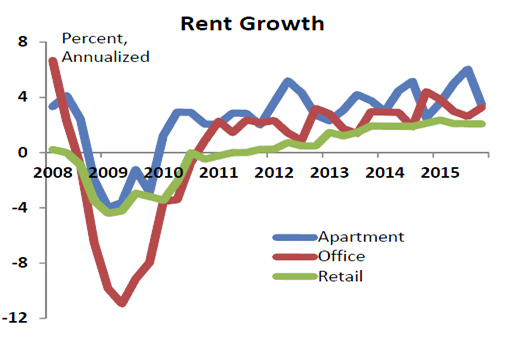 The bullish fundamentals driving office REIT profitability should continue for at least another two years. Landlords are going to have the upper hand in raising rents and keeping their buildings at full occupancy.

Add in the longer-term lease and contract cycles that tenants sign for, and office REITs are in the driver seat for increased profits.

While I generally like to focus on the largest players in a segment, today I’m looking at some of the medium sized players for their maneuverability and specialized market focus.

Piedmont Office Realty Trust, Inc. (PDM) develops, owns and operates Class A office properties in just a few top markets in the country. The majority of their holdings, a whopping 77%, are concentrated within seven regions including the major east coast cities, Midwest around Chicago, and South with Dallas and Houston.

Piedmont is working to consolidate itself in just a few major markets. Management sold some properties last year and used the cash to buy back nine million shares of its stock. That resulted in a 6% reduction in outstanding shares. Overall, management has bought back 16% of its shares in the last five years.

PDM’s $0.84 dividend payout currently yields 4.6%. The stock is down by 2% for the year, but if we look farther back, we see this stock is roughly flat over the past year. Like many office REITs, its stock price hasn’t yet reflected how good business is.

If you’ve been to the Baltimore-Washington corridor and surrounding area like I have, you know that the area is dotted with countless “unremarkable” office buildings that house the hundreds of thousands of private security contractors, cyber warriors, and related arms of the military industrial complex.

In addition to DC, they have properties in Texas and Alabama. Both also offer strategic locations near government agencies. OFC is currently paying a dividend of $1.10 that yields 4.7%. The stock is up almost 10% for the year after a dismal second half of 2015.

Liberty Property Trust (LPT) operates in the commercial office space and the industrial space. The national company is centered around the transportation corridor of the east coast and the distribution hubs near the center. It also has the smallest office exposure – just 30% of its total rent – of the companies I’m discussing with you today.

Low oil prices benefit the trucking and shipping industry, which in turn may trickle down to Liberty – it has a large industrial exposure to distribution centers.

That hasn’t happened yet, and Liberty is down about 4% for the year (a continuation of its 20% slide over the last year). The company is currently paying a $1.90 dividend that yields 6.6%.

I mentioned DLR last month, too. It’s one of my favorite dividend growers. This stock has gained 8% year-to-date, and roughly 30% over the past six months. Despite this, it’s still delivering a $3.52 dividend that yields 4.5% for investors.

DLR has made it part of their mission to have properties in technology hubs near network backbones. They also strive to integrate their property leasing with a raft of data center services – part of which includes physical security for facilities.

The properties can demand higher rents and the company can increase its revenue streams from the traditional lease found in many property REITs.

Alexandria Real Estate Equities Inc (ARE) is an interesting type of office REIT. They develop, own and manage office space and laboratory space for the life science industry. The hot biotech sector needs to rent space like any other. The difference is that they can’t exactly use any random Class A office space for their specialized research work.

In addition to locating in seven clusters with major research hubs in cities and high-caliber universities across the country, they also have properties in Asia and Canada.

ARE currently offers its $3.08 dividend which currently yields 3.8%. And there may be potential bidders for the company – one of Alexandria’s competitors, Biomed Realty, was recently bought out by Blackrock.

Medical office REITs are among the best positioned right now, capitalizing on the booming healthcare industry. Regardless of what happens to China’s stock market, or who gets elected president here, there’s one guarantee you can bank on as an income investor:

The country will be older in the future than it is now. And soon.

There’s a bull market unfolding as Americans get older, and it will run for at least two or three decades. Here’s what’s driving profits in the America-is-getting-older trend:

REITs like ARE will serve investors well in the coming months and years, but I’ve uncovered three others that are even better positioned to profit. They pay yields of 6.9%, 7.3%, and 8.3%, and all three are increasing earnings and their dividends annually. Click here for the names of all three and to learn how we’re playing this unstoppable megatrend.