These 2 Stocks Could Boost Their Dividends Twice In 2016

Looking for an easy way to boost your portfolio’s yield by 30% and watch your dividends rise more than once a year? I’ve got one for you. And it’ll help you pick up some valuable international exposure, to boot.

All you have to do is look north, to Canada, where there are plenty of top-flight dividend stocks on sale now, like the two I’ll name a little further on.

I know that when most US investors think of Canada, they think of oil and gas—not exactly the best place to be right now. (And these days, some of us may be looking to our northern neighbor as a refuge if Donald Trump wins the presidency.)

But here’s what you may not know: the energy sector, important as it is, only accounts for 10% of Canada’s GDP. Beyond that wild industry, you’ll find a grab bag of stocks with high, safe yields. Just look at the current yield on their main stock exchange, the S&P/TSX Composite Index. Right now, it sits around 3%, or about 30% more than the S&P 500, at about 2.3%.

And now is a great time to go cross-border shopping, because the TSX has plunged since the middle of 2014, when oil prices started to crater (energy stocks account for about 22% of the index, second only to financials, at 35%). 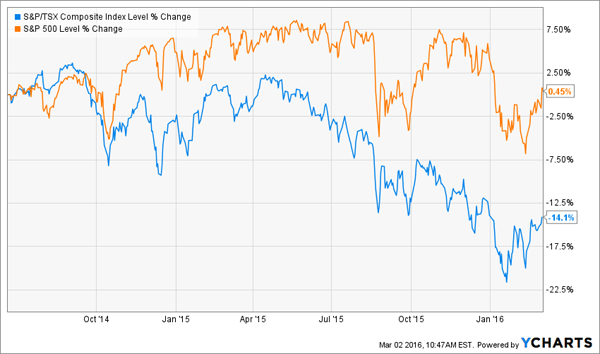 The low Canadian dollar is another plus: as recently as 2013, it was trading near parity with the greenback, but now $1 US will get you around $1.34 Canadian.

Below are two solid northern picks to put on your watch list now. Both have a lot in common with companies here in the US, and both yield north of 4%. Plus they trade on the NYSE, so they’re a snap to buy.

Regular readers know I consider Wells Fargo & Co. (WFC) one of the few stocks you can buy now and hold forever. That’s an opinion I share with Warren Buffett: Berkshire Hathaway has held WFC for years, and the bank is Berkshire’s top stock holding, at about 19.8% of the portfolio.

But if you like Wells, I think you’ll really like the northern bank I’ve found: Toronto-Dominion Bank (TD). You may be familiar with it; TD has 1,300 branches south of the 49th parallel, which is more than it has north of it. It also owns 41% of online broker TD Ameritrade Holding Corp. (AMTD).

TD and Wells have a lot in common—and some key differences—so if you’re familiar with WFC, it’s a good starting point for learning more about this Canadian lender.

To start, you may be surprised to hear that TD has less oil and gas exposure than Wells. As of the end of Q4, drawn loans to the energy sector stood at C$4.2 billion, or 0.77% of TD’s C$544.3 billion in total loans, though the bank does have C$9.7 billion of undrawn commitments, like credit lines.

Wells, for its part, has US$17 billion oil and gas exposure, accounting for about 2% of its loan portfolio, according to CFO John Shrewsberry, along with around US$25 billion of unused credit lines.

Another place TD edges out Wells? Dividend yield. Right now, the Canadian bank yields 4.1%, while Wells clocks in at 3.0%. However, WFC does hold a big edge in dividend growth, hiking its payout a whopping 650% (in US dollars) since 2009 vs. 80% (in Canadian dollars) for TD.

But if you like your dividend hikes consistent (and who doesn’t?), TD may still be for you: unlike Wells, it didn’t cut its payout during the financial crisis. What’s more, its last increase—7.8%, declared on February 25—came in above Wells’s last hike of 7.1%, declared in April 2015. And like Telus Corp. (see below), TD has a lovely habit of giving its investors two raises a year, something it did from 2011 through 2014. 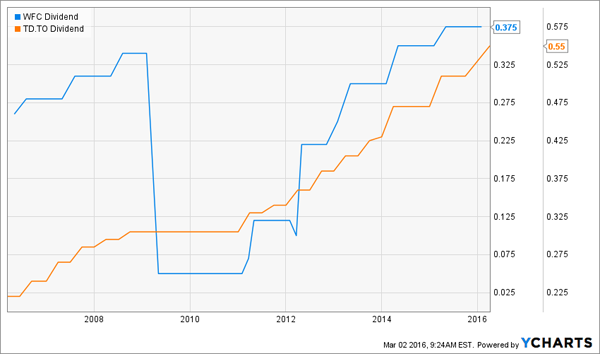 This Telco Boosts Your “Paycheck” Twice a Year

There’s no doubt the US wireless market is concentrated, with AT&T (T), Verizon (VZ), Sprint (S) and T-Mobile (TMUS) locking up 83% of it between them.

Of those, I like Telus, which yields 4.3%, the most right now. The telco gets 52% of its sales from its wireless operation; its wireline segment, which includes landlines, high-speed Internet and TV, chips in the rest.

Telus is not only converting its high wireless market share into steady profits, it’s also handing a good portion of that cash back to shareholders. And it’s doing so far more quickly than AT&T or Verizon, even when you account for fluctuations in the Canadian dollar: 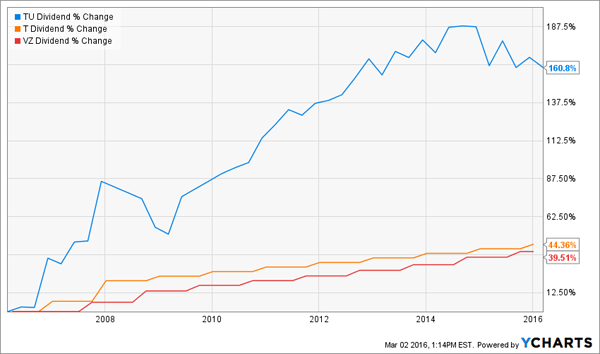 But that only tells half the story behind this steady payout. The other is frequency—unlike both its Canadian competitors and the main US telcos, Telus has been hiking its dividend twice a year, stretching all the way back to 2010. In all, that adds up to an 85.3% increase in six years (in Canadian dollars).

The kicker? You can pick up that attractive payout at a nice discount: Telus trades at 16.2 times its last 12 months of earnings, below its five-year average of 16.5. That multiple also clocks in lower than BCE, at 18.2, and Rogers, at 18.0.

This Unsung 7%-Yielder Hikes Its Payout 4 Times a Year

These two Canadian dividend growers would make great additions to any portfolio, but the truth is, you don’t even have to cross a border to find rock-solid yields that are double what TD and Telus pay.

One of these three hikes its dividend twice as much as Telus. So if you’d be happy getting a “pay raise” from the Canadian telco twice a year, imagine how you’d feel if your dividend check went up every single quarter without fail.

Think about it: every time your payout showed up in your account, it would be higher than the time before. How many stocks give you that kind of certainty?

Well, wonder no longer, because that’s exactly what this under-the-radar 7%-yielder has been up to. Here’s how those steady, predictable dividend increases have played out over time:

What’s driving that growth? Nothing less than the biggest demographic shift in US history: the aging of America’s 77 million baby boomers. Consider that 10,000 Americans turn 65 every day—or one every 9 seconds—and they’ll continue to do so at that rate for the next 15 years.

All three of my top buys are smack in the middle of this massive shift: they provide direct healthcare to elderly Americans.

But they won’t stay hidden for long. So if you make your move now, you’ll immediately start collecting yields north of 7% and position yourself for 15-20% upside in the next 12 months as other investors pile into these reliable dividend-payers.

That’s why I’m urging my subscribers to lock in these juicy dividends today, while they’re still cheap. Go here now and I’ll give you the names of all three of these high-income wonders.