With the S&P 500 down nearly 7% in the last three weeks alone, you can’t be blamed for wanting to throw up your hands and sell all your stocks.

But that’s the worst thing you could do, especially if you have a long time horizon and you mainly hold dividend-paying US companies. In fact, if you’re in this camp, you can largely ignore the market’s daily gyrations. And really, you should take advantage of them.

The numbers tell the tale: according to Ned Davis Research, dividend-paying stocks returned an average of 9.3% a year from 1972 through 2014, compared to 2.6% for non-dividend payers—and they did so with less volatility.

And with the selloff driving prices down—and dividend yields up—now is a great time to add some top-quality names (companies with strong brands, easy-to-understand businesses and rising payouts) to your portfolio.

Here are three such stocks that are permanently on my watch list:

The bank is now Berkshire Hathaway’s (BRK.A, BRK.B) top stock holding, at around 19.0% of the portfolio.

Wells reported steady fourth-quarter earnings on January 15, with earnings per share (EPS) of $1.03, up 1% year-over-year and a penny ahead of the Street’s forecast. Revenue edged up 0.7%, to 21.6 billion, just shy of the consensus estimate of $21.8 billion.

But that didn’t stop panicked investors, fretting about Wells’ exposure to the oil and gas sector, from sending the stock down 3.5%, much worse than the 2.2% loss the S&P 500 suffered that day.

Just how exposed is it? According to CFO John Shrewsberry, energy firms account for a meager 2% of Wells’ loan portfolio. Elsewhere, total average loans grew at a healthy clip of 7%, while deposits gained 6%.

And Wells remains one of the country’s best-run banks, with an efficiency ratio (or costs as a percentage of revenue; the lower, the better) of 57.4%, compared to 68.7% for the sector as a whole.

And no matter what happens with oil prices, you can take Wells’ dividend to the bank: since the financial crisis, it’s hiked its payout by 650%. It also boasts a 3.1% yield and a payout ratio (or the percentage of earnings paid out as dividends) of just 38%, so there’s lots of room for growth here.

Meantime, Wells’ forward P/E ratio clocks in at 10.5. That’s above peers like Bank of America (BAC), Citigroup (C) and JPMorgan Chase & Co. (JPM), but it’s reasonable when you consider Wells’ potential to profit from rising interest rates—it has more loans on the books than any other bank—and low exposure to China.

Visa Inc. (V) isn’t exactly an income investor’s dream, with its paltry 0.78% yield. But for long-term investors, dividend growth is the key, and here, Visa has a gripping story to tell: in the past five years, its quarterly payout has surged 278% (adjusted for a 4-for-1 stock split last March).

Even so, its payout ratio clocks in at just 18.6%. That’s because EPS has mostly kept pace with the company’s dividend hikes. 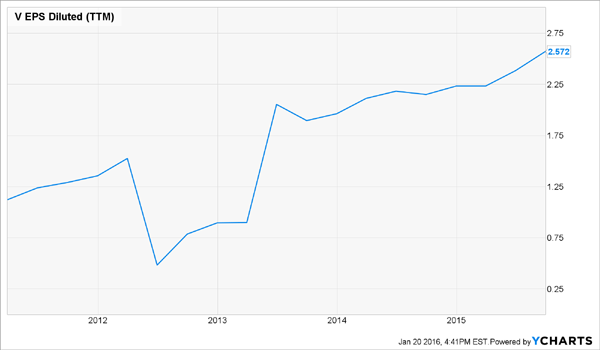 Another thing I love about Visa is that it’s a classic “middleman” business: it simply charges merchants for using its payment network, so it assumes none of the risk of actually lending money, leaving that to the financial institutions issuing the cards.

Payment volumes jumped 12% in the latest quarter, and there’s lots of growth potential thanks to the steady march away from cash and toward credit cards, debit cards and mobile payments.

The stock trades at 21 times forward earnings, compared to 15.7 for the S&P 500, but that’s fair given Visa’s steady business and sterling prospects.

Johnson & Johnson (JNJ): When looking for a stock to hold forever, it helps to home in on companies that have been around for, well, practically forever themselves.

Wells Fargo, founded in 1852, is a great example. Johnson & Johnson, which traces its roots back to 1886, is another. You almost certainly have some of its products—Band-Aid bandages, Listerine mouthwash and Tylenol pain relievers—in your medicine cabinet right now.

I also love JNJ’s diverse operations, which consist of three segments: consumer (about 20% of revenue), pharmaceutical (45%) and medical devices (35%).

If you’re looking for a safe dividend (and who isn’t?), this stock is for you: JNJ has raised its payout for 53 straight years, or more than twice what it needed to snag a spot on the S&P 500 Dividend Aristocrats list. The shares currently yield 3.1%, far ahead of the average S&P 500 stock, which pays out just 2.3%. 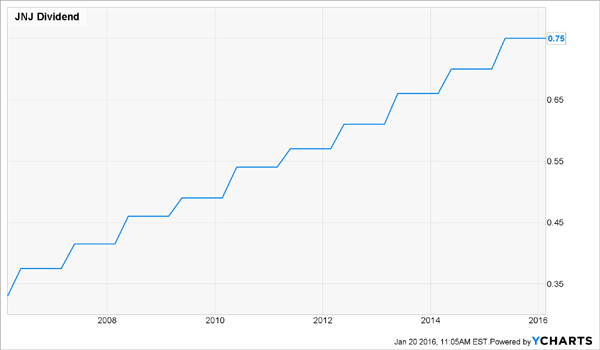 The streak is in no danger. JNJ pays out just over half of its earnings (54.8%) as dividends, and that ratio should hold steady as its profits rise, as Wall Street expects them to in 2016.

Of course, no investment is without challenges, and right now one of JNJ’s biggest nuisances is the strong greenback (just under half of its sales come from outside the US).

But the company has launched a $10-billion buyback program, representing about 3.8% of its market cap, late last year. These purchases bolster EPS by cutting the number of shares outstanding.

JNJ also spends around 12% of its sales on R&D, and that’s paying off: it plans to file 10 new drugs for approval by 2019, with each one having potential yearly sales of at least $1 billion.

Wells Fargo, Johnson & Johnson and Visa are great long-term bets right now. However, the highest yielders of the bunch, JNJ and WFC, only pay out 3.1%.

I prefer to double that straight away with stocks yielding 6% or more. That’s why I urge you to check out my latest special report, How to Live off $500,000 Forever. Inside, you’ll discover my three favorite investment vehicles for safe income in retirement, as well as 9 great stocks throwing off 7%+ dividends. Click here for instant access to the names, tickers and my detailed research right now.