What good is a 2% or 3% annual yield if you can lose it in a single trading session?

The Nasdaq and Russell 2000 are officially in bear markets, which means they’re down 20% from their peak. But bear markets don’t have to stop at 20%.

They can just keep on collapsing. And the weakest links can fall much, much farther than 20%.

In fact, they often do. Just take a look below at the 444 S&P 500 components that were part of the index during the 2007-09 selloff. Only a handful fell even close to the bear-market minimum.

Meanwhile, almost a quarter hemorrhaged 70% of their value or more!

Regular readers know that I’m expecting a relief rally any hour now. That will be a good opportunity to consider selling these four dividend stocks, which are going to face significant headwinds in 2019 – especially if the broader markets struggle.

Typically, consumer staples companies – which deliver the kinds of goods that people simply need no matter what economic situation arises – are no-brainer investments in a down market. If you happen to add a massive healthcare business to the mix, all the better.

And yet, Johnson & Johnson (JNJ) – which is responsible for Johnson’s, Band-Aid, Neutrogena and other consumer brands, as well as drugs including Remicade and Stelara – couldn’t be more unbuyable right now.

J&J spent 2018 in court battling off cases related to claims that their baby powder contained asbestos and caused mesothelioma to a few people who were exposed to it. “We will continue to defend the safety of our product because it does not contain asbestos or cause mesothelioma,” the company said in May after losing a ruling in California.

But Reuters dropped a bombshell report in December saying that internal documents “show that the company’s powder was sometimes tainted with carcinogenic asbestos and that J&J kept that information from regulators and the public” for decades. JNJ tanked 13% in five trading days following Reuters’ report, and that very likely won’t be the last of it. Johnson & Johnson not only risks suffering a massive reputational hit to its consumer brands, but its legal path forward suddenly looks fraught with potholes.

In some situations like this, stocks can be beaten to the point of deep value and high yields, but that’s not the case here. JNJ trades at 15 times forward earnings estimates, which is merely on par with the market, and it still yields less than the 10-year right now. That’s no value, especially for a company that just began a fresh new leg of uncertainty and nightmarish PR. 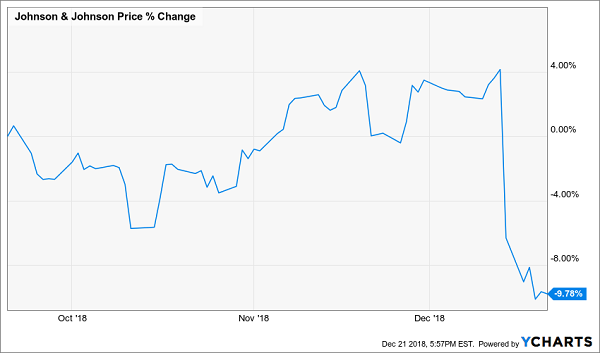 Wells Fargo actually has a couple of advantages over JNJ right off the bat. It yields slightly better at north of 3%, it’s certainly much more value-priced at just 9 times estimates, and it’s much farther along the scandal lifecycle than Johnson & Johnson. Its fake-accounts scandal, in which millions of unauthorized accounts were created on behalf of unknowing customers, started rolling downhill Sept. 8, 2016, so we’re more than two years in.

Well, that is, we’re more than two years in on that scandal.

Along the way, Wells Fargo keeps on stepping on self-laid landmines, including hundreds of accidental foreclosures from a computer glitch, charging inaccurate mortgage fees, nudging people into insurance and other products they didn’t actually need, as well as several other scandals.

Wells Fargo, once viewed as the Gallant of Wall Street’s “Big Four” banks, has quickly transformed into Goofus. The stock has simply stalled out and has traded flat for roughly four years now. Worse still, the Federal Reserve put certain growth restrictions on the bank that WFC think will last for the first half of 2019, but could stretch even longer.

A less-than-enthusiastic economic outlook for 2019 and likely a slowdown in interest-rate hikes will make next year difficult for financials in general. And Wells Fargo is the worst option in that field.

B&G Foods (BGS) looks like your typical defensive consumer staple. It offers a more-than-ample yield – in fact, at more than 6%, it’s suspiciously robust. And while you may not be familiar with the name B&G Foods, you’re almost certainly familiar with its brands: Green Giant veggies, Ortega Mexican foods, Mrs. Dash seasonings, Spice Islands spices and SnackWell’s cookies.

This is the kind of stock that should hold up well in good times and bad, and in fact, it has tended to do all right during market downturns. BGS is actually almost breakeven over the past month, versus a nearly 15% fall for the S&P 500. Better still, the company has grown at an extraordinary rate over the past few years, roughly doubling revenues between 2014 ($848 million) and 2017 ($1.7 billion)

Under normal circumstances, this would look like a perfect under-the-radar play in 2019. But I think BGS is due for a slowdown in 2019, for a few reasons.

For one, much of its growth of the past few years has come via an aggressive acquisition strategy – it bought Green Giant from General Mills (GIS) in 2015, for instance, and Static Guard and Kleen Guard from Unilever (UN) in 2011. However, the company has racked up an impressive pile of $2.2 billion in long-term debt against just about $206 million in cash. The company is levered heavily, too, projecting during its Q2 call that it would end the year with net debt at 5.5x to 5.6x pro forma adjusted EBITDA.

Moreover, that impressive dividend is quite the financial weight, with its forward annual rate of $1.90 coming in at 95% of this year’s projected earnings. Those profits, by the way, are a step down from 2017’s $2.12 per share, and 2019 is expected to still be well under that number, at $2.03 per share. That projected figure accompanies Wall Street estimates for a 3.3% pullback on the top line.

B&G isn’t necessarily a ticking time bomb, but it could be a quagmire for new money in 2019. This is a stock to revisit and re-evaluate at a later time. 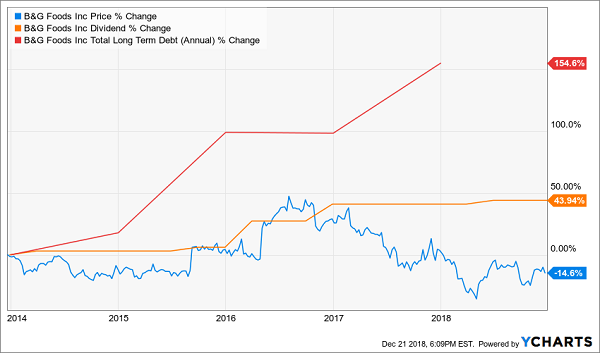 Almost a year ago to the date, I said that casino operator Las Vegas Sands (LVS) “will have something to prove to income investors in late January, when the company should announce an improvement to its quarterly payout.”

It proved something, all right.

LVS handed out a mere two-cent (2.7%) dividend raise to 75 cents per share in early 2018 – a year after it produced a penny-per-share hike for its shareholders. It’s a reflection not just of slowing earnings, but also an increasingly cramped payout ratio that sits around 87% for its trailing 12-month earnings.

Q4 2018’s sudden stock-market losses are about to put a cramp in high rollers’ style – it’s not uncommon to see luxury brands’ operations take a hit shortly after significant market pullbacks. Moreover, economic growth is projected to slow next year, and that tends to be a warning signal for overall performance at casinos, too. (Investors looking for a recent example merely need to look at Macau, the Chinese gambling hub that’s slumping amid that country’s economic sluggishness.)

The analyst projection that matters: a 1% pullback in revenues for next year. That, as well as LVS’ ho-hum profits, don’t inspire confidence that Las Vegas Sands will lead a bull rebellion against the bears.

Safety is priority No. 1 for most investors. I’m sure you’re the same way. And I agree – safe stocks are exactly how I plan on squeezing profits out of an uncertain landscape in 2019.

But I’m taking a slightly different route that makes a world of difference – say, between 2x and 4x the returns.

The market’s biggest blue chips typically churn out 8% returns on average. However, I’ve recently discovered away to take some of the more “growthy” safe stocks out there – think juicy blue chips such as Visa (V) – and squeeze giant distributions out of them en route to nearly 30% in annual total returns! That’s nearly quadruple the market’s average performance.

It sounds crazy. It’s certainly unorthodox. But this is one of the best income opportunities I’ve come across in years – and I’ve even put my money where my mouth is, putting my own personal accounts to work in this strategy.

This method takes Wall Street’s most growth-first, income-last blue chips such as Google parent Alphabet (GOOGL), and it turns them into “double threat” holdings that put traditional dividend payers like Procter & Gamble (PG) and Coca-Cola (KO) to shame. We’re talking double-digit upside, 8%-plus dividends … and no, we’re not doing this by using complicated options schemes or arcane leveraged funds, either.

This isn’t a complex options strategy. It’s not high-risk derivatives. It’s certainly not the “next Bitcoin.” This is a stunningly safe strategy that’s essentially the same as buying traditional American blue-chip stocks. In fact, I’ll even show you the four steps you’ll need right now: