So far, 2016 is shaping up to be a great year for just about anyone in the stock market. With the S&P 500 up 7% year-to-date, it’s been pretty tough to lose money in this year’s market.

That’s caused a lot of money to flow into high income yielding stocks, although some aren’t covering their dividends and some have grown wildly overvalued.

For now, income investors are ignoring these developments, since they’ve been getting paid cash dividends while their tickers trend up. This has also encouraged a growing number of investors to pile into business development corporations (BDCs), a group of specialty lending firms that pay dividends of 8% or more—sometimes much more. As a result the ETF tracking this market, the UBS E-tracts BDC Fund (BDCS) has risen over 10% in 2016:

A Big Year for BDCs 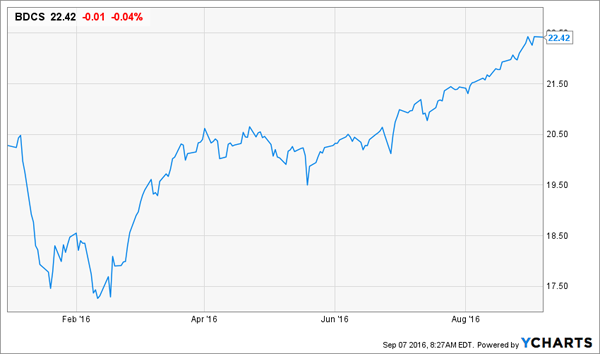 First-level investors might be emboldened to stick their money in this 8% paying fund. But investors should think twice before jumping in – many of the fund’s holdings are overvalued, which puts the big payout in danger.

Take, for instance, the fund’s biggest holding: Ares Capital Corporation (ARCC), which is up 15% year-to-date, excluding its 9.3% dividend:

A Big Boost for Ares 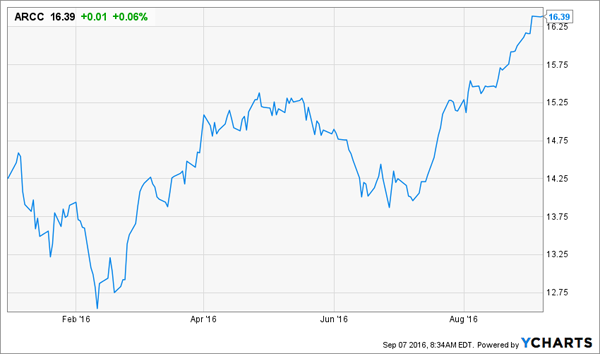 This is a big outperformer relative to the broader BDC market, so what’s not to love?

Quite a bit, actually.

ARCC’s net asset value (NAV) is $16.62, which is 1% below what it was a year ago. That doesn’t sound like much, but keep in mind that ARCC has been struggling against non-accruals in its debt portfolio.

In other words, companies that ARCC has lent to are not paying their bills, which caused non-accruals to rise to 2.6% of the total portfolio at the beginning of the year. This has fallen a bit in recent months as the company has written those debts off, but with nearly a third of its portfolio in second-lien assets, we may see more defaults come ARCC’s way.

BDCS’s second biggest holding is an even more worrisome company: Prospect Capital Corporation (PSEC), a controversial company that got a fiercely negative write up in the New York Times at the end of last year. In addition to a pending shareholder lawsuit accusing management of taking excessive fees from the fund, analysts have been looking at PSEC’s dividend with more caution. Its 11.7% yield is intoxicating, which might explain why PSEC is up 22% year-to-date: 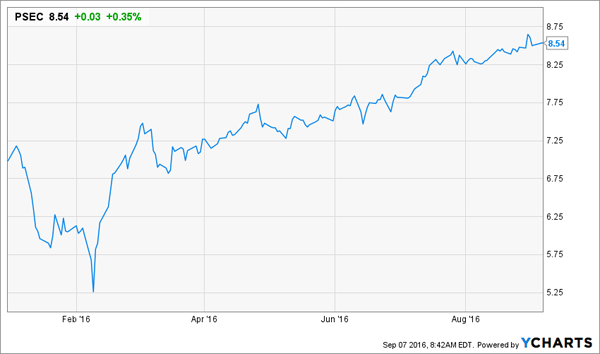 Again, this is not because PSEC’s assets are going up in value. In fact, they’re going down. A year ago, PSEC’s NAV was $10.31 per share—and now it’s just $9.62, a shocking 6.7% decline. PSEC also just barely out earned its dividend by a penny, but only thanks to the sale of one of its assets. This led analysts at Barclays to warn that PSEC cannot sustainably earn its dividend, because these types of sales cannot be relied upon every quarter.

Let’s look at one more of BDCS’s top holdings: American Capital (ACAS), an unusual BDC because it does not pay out dividends. This makes it relatively unpopular with income investors for obvious reasons, but the BDC still jumped nearly 24% in 2016:

American Capital Rising with the Best of ‘Em 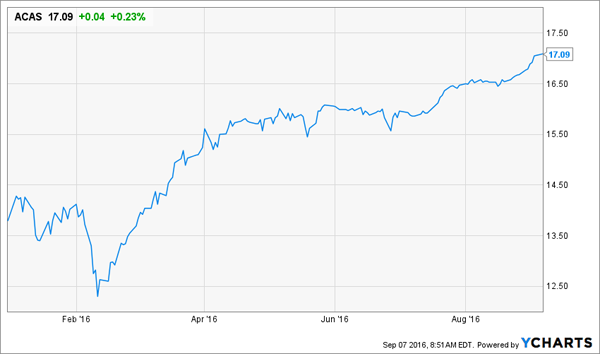 Even without a dividend, ACAS has been attracting a lot of attention. Back in May, ARCC announced it would acquire ACAS for $13 billion, which would mean anyone holding ACAS after the merger is completed would begin to earn a dividend.

So what’s the problem? For one, ACAS holders will inherit the problems ARCC has already, as well as one more: size. A combined ACAS and ARCC would benefit from some synergies, but would also have a new problem of the largest BDC in the world struggling to find new loan opportunities that would actually increase the company’s income, and thus provide shareholders with higher dividends.

Size is already a problem for ARCC, which has grown the total amount of its second lien loans as it finds fewer opportunities in the middle market lending universe. A larger company would likely need to reach even farther to make loans.

But not all BDCs are sells. Investors have their shot at an interesting opportunity with Goldman Sachs BDC (GSBD), which doesn’t even make it into BDCS’s top ten holdings. As you’d expect, this fund is managed by none other than Goldman Sachs (GS), and can benefit from the connections and knowledge the giant investment bank has. That’s partly why GSBD is up 13.4% year-to-date: 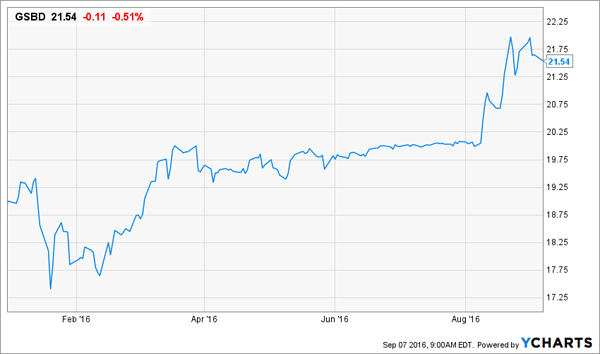 It’s underperformed the bigger BDCs so far in 2016, which I see as a great opportunity. This is especially true when we consider that the fund is out earning its dividend, and currently is paying out just 90% of its net investment income on an annualized basis—versus 96% for PSEC and 97% for ARCC. That means higher dividends might be around the corner for GSBD, although the fund is already paying a fat 8.4% yield to stockholders.

Are 8% dividends without big risks impossible? Not really—and GSBD proves it. Savvy investors can build a more diversified portfolio that pays out 8% in cash dividends, but it means going beyond the lazy approach that inevitably results in taking on more risk because you end up buying a bunch of stuff you don’t understand—and that is heading towards underperformance.

A deeper understanding of both the stock and bond markets and the funds that provide these high incomes is necessary to building a strong, high-yield portfolio without with high risks. Billionaire investors are doing this right now—but you don’t have to be a billionaire yourself to follow in their footsteps.

“Bond God” Jeffrey Gundlach has been pounding the table over a particular group of funds that currently trade at significant discounts to net asset values and pay 8% yields—or more—simply because most people don’t know they exist. Click here to find out why Gundlach is so bullish on these funds and discover the names of my top three plays.