3 Unloved Dividend Stocks to Buy Now – and 2 to Sell

Today I’m going to take you inside an ignored corner of the market where you can still find cheap stocks throwing off quarterly dividends that grow 10%—and more—year in and year out.

Then we’ll zero in on three of these under-the-radar companies, all of which should definitely be on your buy list now. Along the way, we’ll unmask two dividend darlings that are actually “yield traps”—their dividend histories make them look tempting … but buying now could be a recipe for steep losses.

The Best-Kept Secret in Stock Investing

So where is this income investors’ wonderland, you ask?

I’m talking about mid-cap stocks, or companies with market capitalizations between $2 billion and $10 billion. They actually form the biggest segment of the market, but you’d never guess that, because for most analysts and investors, stock investing begins and ends with the sacred cows of the S&P 500.

That lack of attention is fine by me, because it gives us a much wider field in which to find overlooked bargains than we’ll ever have in the large cap universe.

Here’s something else few people know: mid-caps have quietly delivered bigger gains than large- and small cap stocks over the past 20 years. 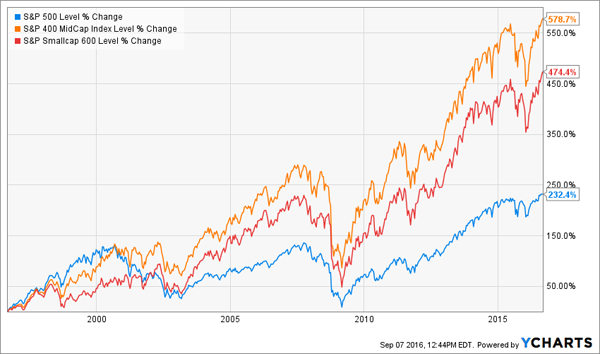 Along with reasonable valuations, there’s another ingredient I always add to the mix when I’m combing the mid-cap universe (or any universe, for that matter): a record of surefire dividend growth.

If you’re a regular reader of my articles on Forbes or Contrarian Outlook, you know I’m a big fan of dividend-growth stocks. The reason is simple: they outperform all other stocks over time, according to Ned Davis & Associates, whose researchers recently looked at stock returns from January 1972 through December 2014.

The key takeaway? Companies that steadily grew their payouts returned 10.1% on average over that 43-year period, compared to 7.7% for steady dividend payers and just 2.6% for companies that paid no dividend at all.

So it’s a no-brainer that we’d put dividend growth high on our mid-cap shopping list.

With that in mind, here are three mid-caps that are red-hot buys now. So you can quickly spot what sets them apart, I’ve stacked them up against two large caps headed for trouble … even though investors insist on viewing them through rose-colored glasses.

DDR Corp. (DDR) has a market cap of $7.0 billion and 352 malls across the US. It’s also a much better buy than the one name just about everyone thinks of when they think of retail REITs, Realty Income (O), with an $18-billion market cap and 4,600 properties.

Why do I say that? Because the upstart knocks out the champ in three key areas: dividend yield, dividend growth and valuation. That gives DDR a much surer path to outsized total returns than Realty Income.

DDR starts with a 4.0% dividend yield, besting its large cap cousin’s 3.6%. But dividend growth is where DDR really comes into its own, with a payout that’s skyrocketed 138% in the past five years. That’s more than triple the 39% increase Realty Income handed its shareholders! 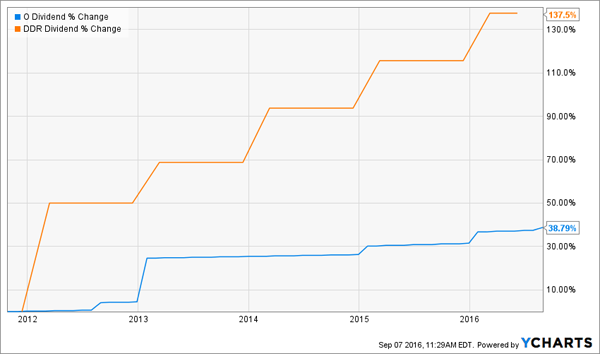 Investors usually take notice of payout hikes like that and drive the shares into the stratosphere, but DDR’s rise pales next to Realty Income’s: 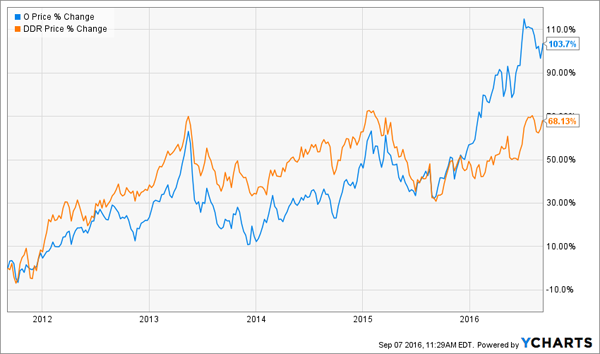 That tells me DDR still has lots of room to run as large cap REITs’ pricey valuations send more investors into the mid-cap space. And “pricey” is an understatement: Realty Income trades at 24 times trailing-twelve-month funds from operations (FFO)—the REIT equivalent of earnings per share—compared to just 15 times for DDR.

Worse, Realty Income’s price-to-FFO ratio is way up from just 18 a year ago—a gap I’d be worried about if I held the stock.

This Mid-Cap REIT Is Flashing “Buy”

Apple Hospitality REIT (APLE) operates 179 hotels across the US under the Hilton and Marriott brands.

Don’t be surprised if you haven’t heard of it; the stock is a new issue, having only begun trading 16 months ago, and only five brokers cover it.

I’ll say upfront that the REIT doesn’t (yet) offer superlative dividend growth, having left its payout unchanged since its IPO, but you’re well paid from the start, thanks to its current dividend, which yields 6.5% and is well covered by FFO.

How did Apple REIT Ten shareholders respond? By selling their new shares and sending APLE down nearly 6%! 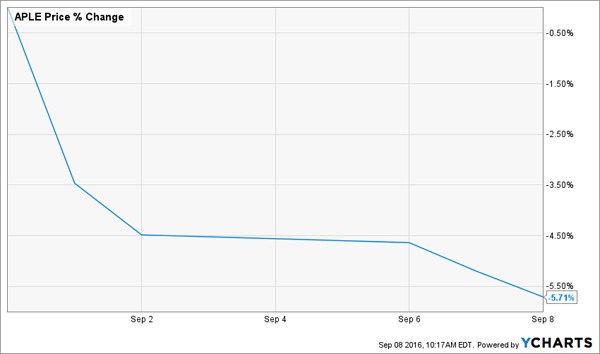 Selling pressure like that is far from unusual after a merger, as shareholders in the acquired company suddenly find themselves holding a stock they didn’t pick themselves and hit the sell button to lock in their profits.

The drop is great news for the rest of us, because it’s cut APLE’s price-to-FFO ratio to a bargain 10.8 while pushing its already high dividend yield even higher. Plus, the new assets are a great fit with Apple Hospitality and will increase FFO over time.

An Unloved Dividend Star … And an Overhyped Laggard

Nordson Corp. (NDSN) and 3M (MMM) both run “boring” businesses: Nordson’s gear dispenses adhesives, industrial coatings, sealants and just about any other fluid under the sun for clients in a range of industries. 3M sells more than 19,000 products in the US alone, ranging from pipe linings and sandpaper.

Something else they have in common? Both are translating steady demand for their products into steady dividend growth, with Nordson’s string of hikes stretching back 53 years, while its large-cap cousin’s goes back 58.

But to stay ahead of inflation and quickly boost the yield on your initial investment, you don’t just need regular dividend hikes, you need big ones, too. Here, Nordson shareholders win by a country mile: 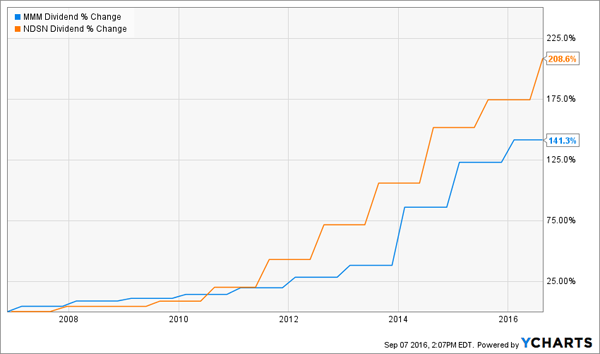 A quarterly payout that’s more than tripled in the past decade makes the stock’s 1.1% dividend yield much easier to swallow, as you’ll quickly build on it—and overtake the 2.5% 3M pays out today—as the dividend hikes keep rolling in.

And they will, as Nordson’s earnings growth is more than enough to keep the payout popping: earnings per share (EPS) soared 28% in the latest quarter, on a 6% sales gain. For the full year, analysts forecast a 5.5% sales rise, driving a 26% EPS boost.

Those numbers easily justify the stock’s forward price-to-earnings (P/E) ratio of 22. They also show how much 3M investors are overpaying: the juggernaut’s forward P/E also clocks in at 22, but its EPS is forecast to rise just 8% this year.

Worse, that’s all due to cost cuts, as analysts see revenue coming in flat. Of course, slashing expenses can only take 3M so far; it needs to find a way to spark sales growth and justify that high P/E, or its stock could be headed for a fall.

So don’t wait. Buy Nordson now, before the strengthening US economy drives up demand for the company’s gear—and sends the share price out of reach.

Mid-cap REITs and regular stocks like Nordson are great buys now, but they’re far from my favorite dividend-payers today.

That honor goes to three other picks throwing off much higher yields than any of the five stocks mentioned above. I’m talking payouts of 8.0%, 8.4%, and even 11.0%!

Like APLE and DDR, they boast historically low valuations, trading at 7% to 15% discounts to their true value. But I don’t expect income-starved investors to ignore them for much longer, so if you get in now, you’ll set yourself up for a nice gain as that gap closes.

Don’t miss out. Go right here to get the full story and uncover the names of these 3 incredible income plays now.