What the heck are you supposed to do with your retirement portfolio between now and the November 8 election? Cash it out and put the greenbacks under your mattress?

If that’s what you’re thinking, you may be having flashbacks to 2012, when volatility spiked in the month leading up to voting day, as shown by rise in the CBOE S&P 500 Volatility Index (VIX), the so-called “fear indicator”: 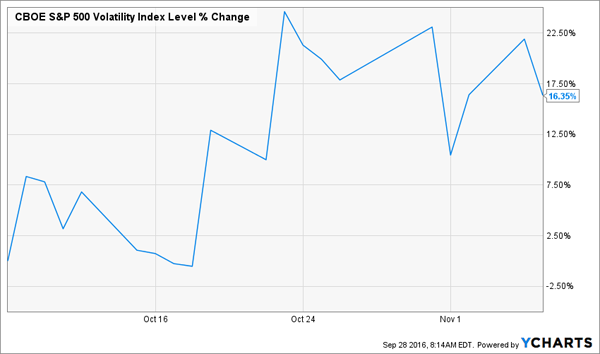 And of course, 2008 is still seared into everyone’s mind, when the financial crisis was mauling the economy and stocks as Barack Obama and John McCain squared off.

Here’s the good news: if your timeline is long, you have little to fear from the occupant of the White House, even in an unprecedented election like this one. That’s according to research from Oppenheimer, which looked at average annual S&P 500 returns for rolling 20-year periods between 1950 and 2010.

That timespan included just about every nasty situation you can think of: runaway inflation, sovereign debt crises, the 1987 Black Monday crash, the dot-com bubble, the 2008/09 meltdown—and of course, presidents good and bad.

The takeaway? In not a single one of those periods did investors come away with a loss, with an average annual return in each 20-year span clocking in at 7.2%. The lowest average annualized gain was 2.4%.

And as I’ve written before, you can give yourself an even wider margin of safety by sticking with stocks that line investors’ pockets with more dividend cash year in and year out, because dividend growers have trounced non-dividend payers and companies with static payouts over time.

Right now, I recommend profiting from the election circus by snapping up top-quality dividend-growth stocks that draw a big slice of their revenue from Uncle Sam. Because no matter what gets said on the campaign trail, here’s something you can count on: the new president will be eager to dole out cash on his or her pet projects.

Here are 4 firms poised to grab a share of that money, no matter who wins on November 8—and one stock you need to vote out of your portfolio now.

2 Defense Picks for a Trump or Clinton Presidency

Donald Trump has talked up his plan for a beefier US military, while Hillary Clinton wants to zero in on areas like cybersecurity and terrorism. But the bottom line is this: defense spending will head higher no matter what. Here are two solid dividend stocks that will cash in.

Northrop Grumman (NOC) gets an astounding 85% of its revenue from the US government, so it will be one of the first to benefit as defense spending ticks higher.

The company has already racked up big contract wins in the last year of the Obama administration, from a $55-billion deal to replace the B-2 bomber (the largest military-aircraft contract in more than a decade) to a just-awarded $255-million agreement to make surveillance drones for the Navy.

Northrop only gives annual updates on its backlog, but as of the end of last year, it was sitting on $36 billion of firm orders. That’s 1.5 years of sales! And I fully expect that figure to head higher this year, thanks to its sales team’s A+ effort.

The stock yields just 1.7% today, but don’t let that fool you: if you’d bought in five years ago, you’d be yielding a tidy 6.9% on your initial investment now, thanks to the payout’s 80% rise in that time. 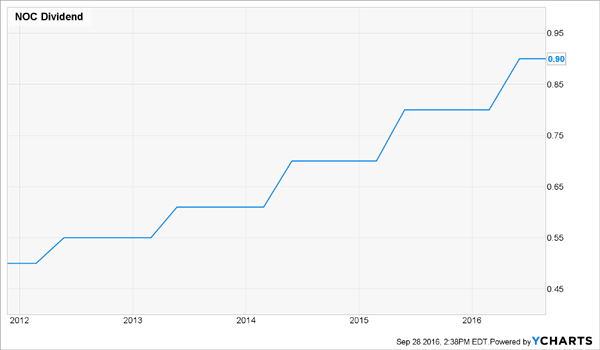 Add in a payout ratio (or the percentage of earnings paid out as dividends) of just 30% and potential for even bigger contract wins after Inauguration Day, and you’ll be kicking yourself if you don’t get in on this one now.

Raytheon Co. (RTN): If you want to hedge your bets on military spending, Raytheon is the defense stock for you.

It has a lower dependence on the US government than Northrop (around 68% of sales) and a revenue stream that’s as balanced as you can get: each of its four main businesses chips in about 25% of total sales. And like Northrop, it’s sitting on a backlog that equates to about 1.5 years’ worth of sales.

Here are two things I love about Raytheon: it churns out missiles, torpedoes and guided munitions that constantly need to be replaced and it’s an R&D stud, having boosted its spending in this area by 57% in the past five years. 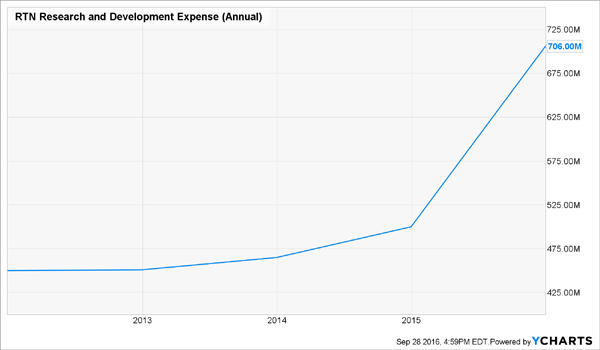 That outlay is lighting a fire under Raytheon’s underappreciated cybersecurity business, which accounts for just 2% of total revenue now but saw its sales soar 142% in the second quarter.

That gives Raytheon the ability to profit from two growing trends: higher defense spending and the boom in cybersecurity, which will be a $101-billion business by 2018, up from $75 billion today, according to IT research firm Gartner.

The dividend completes the package: the payout yields just 2.1% now, but it’s up 70% in the past five years and is easily covered by earnings and free cash flow.

Infrastructure Stocks Will Be Huge in the Next 4 Years…

I’m sure I don’t have to tell you that America’s infrastructure is crumbling. According to the American Society of Civil Engineers, $3.6 trillion will need to be spent by 2020 … and that’s just to fix what we have!

It’s a rare area where Clinton and Trump agree, with Clinton promising to bring in a $275-billion infrastructure plan in her first 100 days as president. Trump wants to double that amount.

Here are two attractive dividend-growth stocks whose products will be key to either plan—and one overhyped infrastructure play that’s headed for trouble.

That makes it a cyclical business, and management would be hard-pressed to name one of its markets—from agriculture to mining and trucking—that isn’t weak right now. For all of 2016, the company forecasts a 10% sales drop.

But the 97-year-old firm is an old hand at navigating downturns, and it’s still generating gobs of free cash flow. It’s also keeping a tight lid on costs and a healthy balance sheet.

That’s let Cummins power up its dividend (which yields a tidy 3.3% today) by an amazing 1,038% in the past decade! And it’s not done yet, with dividends accounting for an easily manageable 53% of earnings and 46% of free cash flow.

A jump in US infrastructure spending could be just the tonic CMI needs. Throw in the fact that each previous revenue downturn has been a great time to buy the stock, and you get a blueprint for major upside: 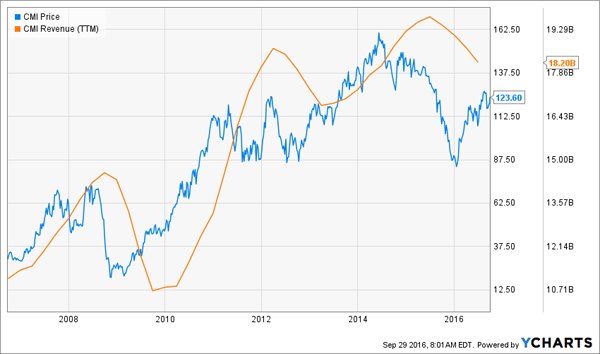 Parker-Hannifin (PH) is one step up the supply chain from Cummins, peddling the pumps, hoses, filters, regulators and other parts that go into the engines and other products companies like Cummins, Eaton (ETN) and Deere (DE) make.

But those companies can’t hold a candle to Parker when it comes to diversification: the company has 5,000 different parts in its catalog, which gives it a nice recurring revenue stream because equipment always breaks down, no matter what the economy is doing.

Parker also stands out for its whip-smart management team, which is steering through the cyclical downturn with ease. Despite a 6% sales decline in its fiscal 2016 fourth quarter, the company’s efficiency drive widened its operating margins, driving adjusted earnings per share (EPS) up 33% from a year ago.

The beat goes on: even though PH sees sales coming in flat in fiscal 2017, it forecasts $6.40 to $7.10 in adjusted EPS, up from $6.46 in fiscal 2016. A boost from higher infrastructure spending would fatten its bottom line (and quarterly dividend) even more.

…But Sell This Laggard Now

Of course, not all infrastructure stocks are created equal, and one major player I’d stay well clear of right now—or sell if you hold it—is Caterpillar (CAT).

That’s because, unlike Parker-Hannifin and Cummins, CAT’s management hasn’t cut costs nearly enough to offset the company’s latest sales slump. The result? Over the past four quarters, CAT has paid out 164% of its earnings as dividends! 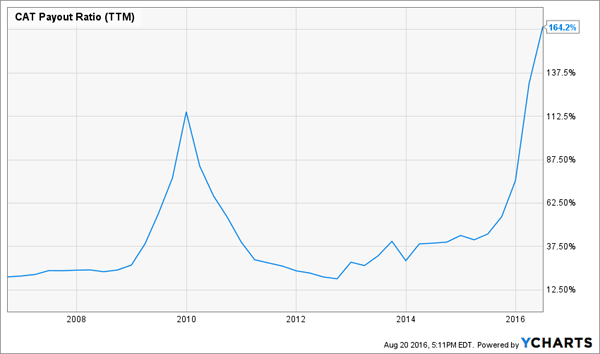 The company’s balance sheet is strong, so the payout is safe for now. But with sales continuing to slide (down 16% last quarter year-over-year), something’s clearly got to give—and a government-spending boost won’t come quickly enough to help.

All 4 stocks above stand to gain no matter who wins the White House. But the highest yielder of them all—Cummins—pays just 3.3% today.

So even if you buy $1 million worth of Cummins shares, you’re only collecting $33,000 in income annually!

For that paltry amount, you’re putting a lot of capital in the way of a stock market crash, particularly with a cyclical stock like CMI. Just take a look at its cardiac stock chart over the last five years:

All 3 are closed-end funds, a high-yielding asset class most investors overlook, and they’re terrific bargains now because they trade at 10% to 15% discounts to their net asset values. That puts a floor under their share prices and gives you some nice upside potential as they close their discount windows.

Even better, unlike, say, Caterpillar, both have excellent management teams with strong long-term track records at the helm.

I’m so excited about these 3 high-income plays I’ve made them the cornerstones of my “no-withdrawal” retirement portfolio strategy, which delivers secure, high-paying dividends you can simply live off of while keeping your capital intact!

Most investors know this is the right approach to retirement. Problem is, they don’t know how to find 7% and 8% yields to fund their lives.

That’s why I specialize in finding safe, under-the-radar high-income opportunities. Click here and I’ll explain more about my “No-Withdrawal” approach—plus I’ll share the names and tickers of my 3 favorite closed-end funds for 7.4%, 8.0% and 9.4% yields.