Technology changes so fast these days that firms in the sector can see their profits quickly vanish.

Sadly, their dividends can disappear just as quickly!

More pain could be on the way. A trio of tempting tech-stock yields, including two double-digit payouts, look destined for failure.

These stocks might seem like a shoo-in as contrarian investing targets. By simply buying over-punished stocks and waiting for a reversion back to a positive mean – think the “Dogs of the Dow” – investors could collect twofold on both the recovery and the elevated dividends.

But the old Dogs premise assumes that bad times are temporary. In many tech cases, the light at the end of the tunnel is actually a train barreling down the tracks towards unsuspecting investors.

Let’s look at three yield traps that you should sell if you’re holding, and avoid if you’re on the outside looking in. Then I’ll share a secure tech 5% payer to buy instead.

Consolidated Communications Holdings (CNSL) is a small communications service provider that primarily provides high-speed internet service, but also VoIP, data center and other services, to 24 states, including the Midwest, Texas and California.

This telecom player sticks out because it’s one of a few players – along with Alphabet (GOOGL) and CenturyLink (CTL) – trying to break through in ultra-high-speed fiber internet services. And it closed on a $1.3 billion deal to buy FairPoint earlier this year to make it the ninth-largest fiber provider in the U.S.

CNSL doesn’t do much trading, at less than 570,000 shares daily despite a sub-$15 stock price, but it’s sure to pop up on income investors’ radars thanks to its double-digit yield.

But don’t get burned here.

CNSL’s suddenly high yield is mostly an effect of a precipitously dropping stock price – shares are off 45% amid a mostly lousy year. While the company’s top line has continued to grow as it has in past years, its profitability has gone from thin to nonexistent, flipping from $14.9 million in earnings through 2016’s first nine months to a $34.8 million loss this year. The company is also wallowing in debt, at just $23 million in cash versus $2.3 billion – more than double the worth of the company by market cap – in IOUs. Free cash flow is thinning up, and an already shaky dividend payout ratio has turned into a payout utterly uncovered by earnings thanks to the company’s bleeding this year.

This is hardly a contrarian opportunity – it’s a yield trap. 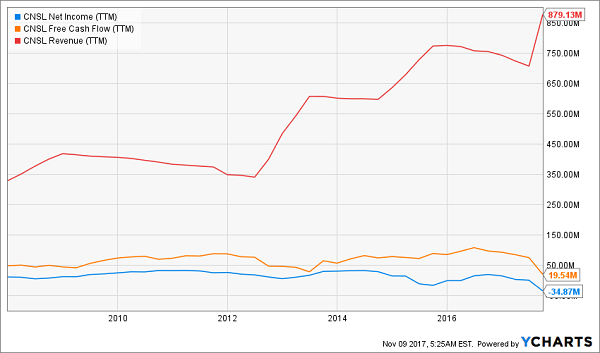 A 4% dividend yield is hardly a bright red flag. And in fact, International Business Machines (IBM) is just a couple of years away from joining the ranks of the Dividend Aristocrats because of its consistent dividend growth.

But there’s more than one way for a tech dividend to be dangerous.

Think of IBM as one of the Sirens – those melodious Greek creatures that lured sailors to their doom with sweet ear candy. That’s the role of IBM’s relatively safe dividend: a tractor beam of sorts into what’s becoming a true train wreck.

IBM has reported 22 consecutive quarters’ worth of year-over-year revenue declines. Take a moment to digest that. That means despite its arsenal of business buzzwords – the cloud, big data analytics and AI (via Watson) – Big Blue hasn’t been able to scrape together a lick of growth for more than five years. While its core businesses are decaying, IBM’s late-to-the-game pivots in more emerging technologies haven’t created anything significant enough to fully take their place.

Again, IBM’s dividend isn’t going anywhere. It has been hiked annually for more than two decades, and with a payout ratio of 47%, I don’t expect that to stop. But that income is about all you’re going to get from this blue-chip tech has-been.

IBM’s (IBM) Dividend Is Secure, But the Top Line Is Not 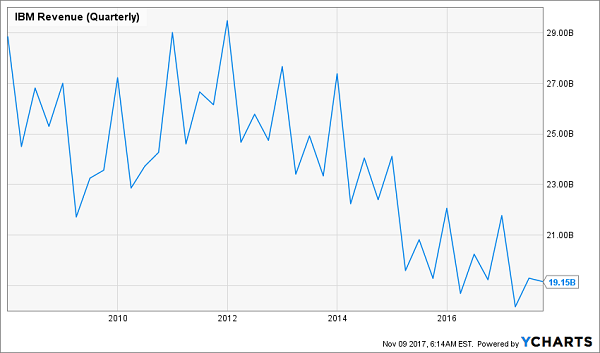 To CenturyLink’s (CTL) credit, it has managed to keep its payout going when other telecoms – namely, Windstream (WIN) and Frontier Communications (FTR) – have been forced to yield.

But don’t give CenturyLink too much credit.

Don’t forget: This provider of voice, internet and video solutions already cut its dividend by a quarter in 2013, and hasn’t raised its 54-cent payout ever since. That 13%, then – like CNSL – is all a product of its shares getting walloped.

CenturyLink is mired in debt from a series of acquisitions, including a buyout of internet service provider Level 3 Communications that just closed at the start of November. CenturyLink’s hope is to become more competitive with larger players, but this M&A strategy has left it with $342 million in cash versus more than $25 billion in total debt.

Worse still are the company’s operations, including a recently reported 25% drop in profits to $228 million, or 42 cents per share, for its third quarter – on an 8% drop in revenues, no less. That result was a few cents below what analysts expected, and puts the company at just 50 cents per share in earnings through nine months versus $1.62 in dividends paid.

How Much Longer Will CenturyLink (CTL) Hold Out? 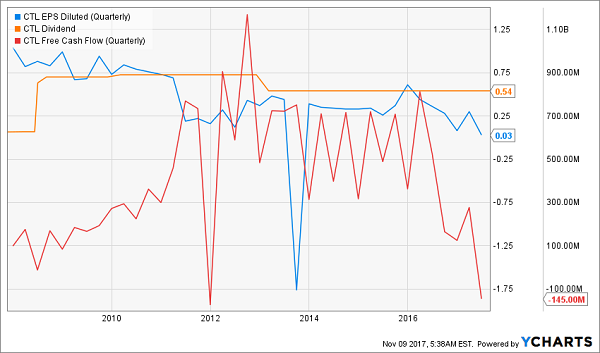 This is far from a safe telco dividend, a la AT&T (T) and Verizon (VZ). This is a decidedly risky payout.

Now check out these two dividends. Which would you rather buy today? 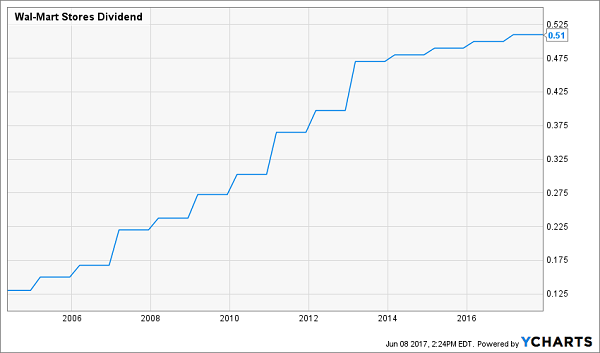 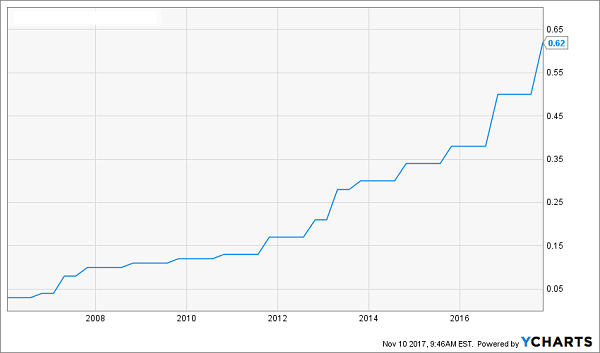 Naturally, you’re going to choose Dividend B. An accelerating dividend is a sign of business strength, while a slowing payout is a sign of trouble. And since stock prices follow their dividends over the long term, I’d much rather own the one that’s “hockey sticking” versus plateauing.

WalMart’s (WMT) business and dividend – the first example – are both plateauing. Amazon is consuming its brick-and-mortar business, and the retail giant has no clue how to actually compete in online e-commerce.

It violated our key rule for business survival in 2017: Avoid being run over by the tech trains!

My favorite tech company to buy today isn’t one of the Big 5. Nor does it play on their train tracks. In fact, this company makes a critical component that is included in every single electronic device on the planet today!

Since there are now more gadgets than humans on Planet Earth, we’re talking about a big market. We’re also talking about a booming one. The number of Internet connected devices alone is expected to top 75 billion in just eight years! 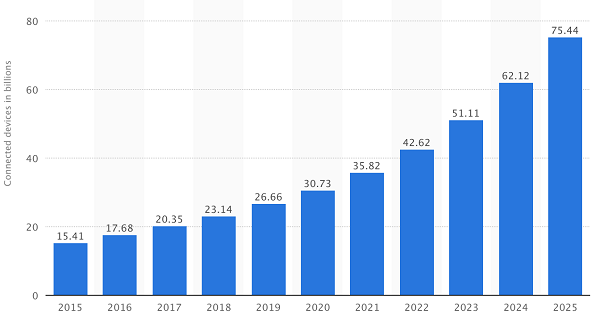 Anyone who buys this stock today is banking a 5% cash yield plus significant price upside in the years ahead – perhaps 586% or more, if history is any indication.

I’d like to email you my full analysis of this company right away – including the firm’s name, its ticker and my recommended buy-up-to price. This stock is a complete “no brainer” to return 12% or more annually for many, many years. Click here if you’d like to receive my report now, and I’ll send you another piece of research, my 7 Best Dividend Growth Stocks With 100%+ Upside right now.