47 Ways to Squeeze Out Larger Dividends Each Year

Some of the greatest dividend growers on the planet are cheaper than they’ve been in many years. Plus, these blue-chip yield machines finally pay.

The problem with bull markets is that they whittle yields down to nothing. Enter the bear, a dividend growth investor’s best friend. These fantastic stocks are finally in the bargain bin.

Today we’re going to do more than highlight one or two. We’re going to fawn over 47 companies about to raise their dividends.

These stocks are set to grow for years to come thanks to their “dividend magnets.” This is a tactic used to identify a three-pronged way to win with stocks: 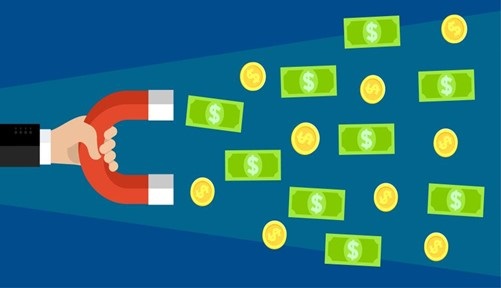 In fact, here’s a look at what Starbucks did since announcing its first dividend—it returned 657%! 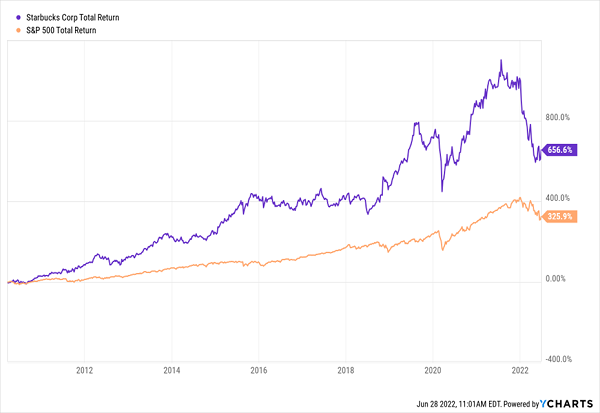 The secret order was SBUX’s dividend growth. Watch how its payout “pulls” its stock price higher: 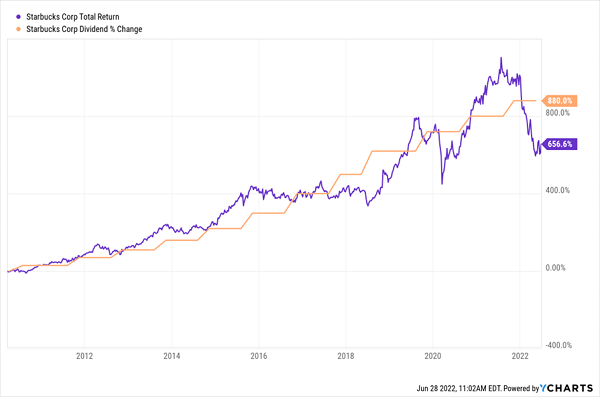 The second-quarter earnings season will soon be upon us, and companies typically pair dividend announcements with their quarterly results. So if we want to “front run” some of these payout raises, now is the time.

Here are 47 companies that are set to raise their payouts over the next couple of months. Let’s divvy these dividend growers into group and discuss a few in particular. (Note: Bold = yields of 4% or more.)

Anyone who’s into index-fund investing will be plenty aware of MSCI Inc. (MSCI). MSCI’s indexes are used by asset managers, ETF and mutual fund providers, and stock exchanges. It also holds the RiskMetrics and Barra brands, which offer up multi-asset class risk and performance measurement tools.

The proliferation of index products has been a boon to MSCI, which has enjoyed uninterrupted top-line growth for more than a decade. (And the bottom line has been up for six straight.) And MSCI hasn’t been afraid to share the wealth.

And it’s maintaining this white-hot payout growth while maintaining a payout ratio in the 40%-50% range.

Look for MSCI to deliver its next dividend hike sometime in late July. 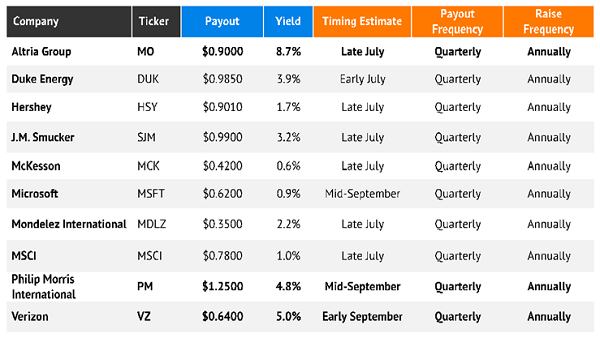 EastGroup Properties (EGP) isn’t exactly a first-to-mind real estate play, but it’s a shining example of how the sector can reward income investors.

EGP is a mid-cap real estate investment trust (REIT) that develops and operates industrial properties throughout the U.S. Sunbelt—primarily Florida, Texas, Arizona, California and North Carolina. Indeed, its properties are located in 13 of the country’s 15 fastest-growing markets. Its focus is on distribution facilities (89% of the portfolio), and it has a diversified tenant base: More than 80% of its tenants lease less than 100,000 square feet, and its top 10 customers represent just 9.4% of its annualized base rent.

EastGroup is just one of many industrial REITs benefiting from retail’s migration toward e-commerce and quick home delivery, so EGP at the very least looks attractive form a trend perspective.

Income investors will love the direction of EGP’s dividend, too. This REIT has increased its payout in 26 of the past 29 years, including each and every year of the past decade. That included a pair of hikes over the past year—from 79 cents per share to 90 cents, announced in August 2021, then to $1.10 in a December announcement—that combined represent a 39% boost.

Typically, though, EastGroup’s dividend-hike announcements come sometime between late August and early September, so keep your ears out for EGP’s next move as summer starts to fade. 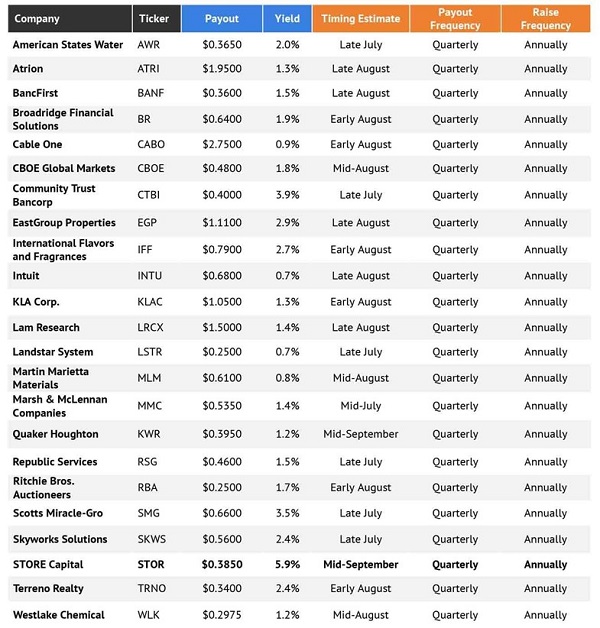 Nordson, like other industrial firms, is a pretty cyclical play whose financial results are largely dependent on a healthy economy. That said, while NDSN shares have been more volatile has a result, they also have outperformed the S&P 500 by more than 125 percentage points over the past decade.

Nordson also has managed to put up an impressive dividend-growth streak without dipping too far into the coffers, giving it plenty of financial backstop for when the cycle moves out of NDSN’s favor.

Most recently, Nordson authorized a fat 31% payout bump last August, to 51 cents per share. That was Nordson’s 57th consecutive dividend increase, making the firm one of the most prolific S&P MidCap 400 Dividend Aristocrats. (Nordson’s 58th straight payout hike will likely come in the middle of this upcoming August.)

Even more interesting: In February, Nordson was called up from the minors, selected to replace Xilinx (XLNX) in the S&P 500—so, barring the truly strange, Nordson should become one of the blue-chip index’s Dividend Aristocrats after that index’s 2023 reconstitution.

Semiconductors have had their backsides tanned in 2022, with the broader industry off by about a third, and Microchip Technology (MCHP) right there with it.

But it’s a fairly reasonable bet that the world’s insatiable lust for ever-better technology will keep MCHP investors well-paid down the road.

And given that technology becomes more integrated with every facet of our lives, day after day, MCHP has been growing like a weed, and has plenty more room to grow. 2021 revenues were 60% higher than they were in 2017; net income was more than 110% better.

Microchip Technology is more than willing to share the wealth…and in fact, it’s a little impatient about it. Rather than upping its dividend each year like many of its peers, MCHP celebrates a little income Christmas every quarter, hiking every three months like clockwork. Its most recent upgrade, announced in May, was a 9% uptick to 27.6 cents per share—but that’s a whopping 34% higher than it was a year ago at this time.

Next up: Another likely payout hike sometime in early to mid-August.

Stocks and Bonds Are Flatlining, But We’re Growing Just Fine!

Every major market index has been dead money in 2022. But while most of the darlings of the stock market are getting crushed, a small, overlooked basket of recession-proof stocks are not just surviving—they’re positioned to thrive.

To the uninformed investor, these stocks will seem downright boring. In fact, it’s likely you haven’t heard of any of these—after all the mainstream media rarely cover some of them, and outright ignore others.

But these “Hidden Yield stocks” offer savvy investors the opportunity to turbocharge their portfolios. That’s because these “total return” plays can both produce price growth while spitting out higher and higher dividends each year.

How are they able to do this while supposedly idiot-proof blue chips can’t? It all boils down to what I call “The Three Pillars”:

Selecting companies with a proven track of increasing their dividend payments is the safest, most reliable way to get rich in the stock market. And I want to show you how it’s done. Click here for details, and how you can get a copy of my exclusive report, 7 Recession-Proof Dividend Stocks With 100% Upside!