The bear growl is rising.

Hot-running tech stocks suffered a huge multiday crack after Goldman Sachs raised bubble worries. The “smart money” is increasingly sounding the risk alarm. Many analysts and prominent investors say the market could use a healthy pullback … but others are now concerning themselves with the potential for an outright crash.

It’s the kind of market environment that raises comparisons to 2007-09, and the dot-com crash – periods that emphasized just how vital it is to have a stable of trustworthy, bulletproof dividend stocks like the five portfolio pillars I want to show you today.

How bad could it be?

On June 7, “Bond King” Bill Gross told participants at the Bloomberg Invest New York summit that “instead of buying low and selling high, you’re buying high and crossing your fingers,” and that market risk is at its highest point since 2008.

A couple days later, Jim Rogers just came out and said it to Business Insider’s Henry Blodget: “Some stocks in America are turning into a bubble. The bubble’s gonna come. Then it’s going to collapse, and you should be very worried.” Blodget asked how big a crash Rogers thought it would be.

“It’s going to be the worst in your lifetime.”

It’s not just stock prices as a whole that are high, not just basic metrics like price-to-earnings ratio. Phoenix Capital points out that a metric Warren Buffett used to signal tech’s froth in the late ‘90s – stock market capitalization-to-gross national product – has eclipsed 2007 levels and is stretching toward the dot-com highs. 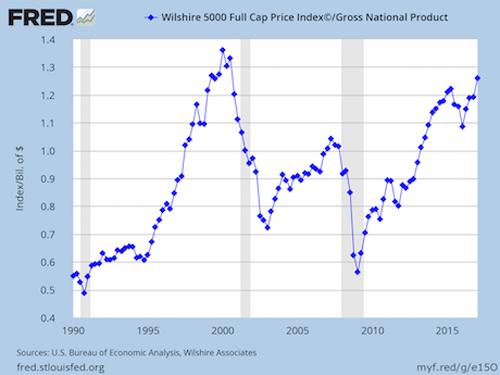 This hardly means it’s time to start stuffing cash under the mattress. What it does mean, though, is that it’s time to re-evaluate your holdings and decide just how fortified you really are.

The best defense? Stocks with can’t-miss businesses that always find a way to rebound. And you’ll note that I’m not saying “stocks that won’t fall in a crash.” When the entire stock market goes, fear drives people out of the best of stocks. That’s why you simply want to look for longtime survivors, opportunists and companies that haven’t gotten ahead of themselves.

Here are five that are built to last through thick and thin.

AT&T (T) is the classic widows-and-orphans play. It’s a slow-and-steady dividend stock so ubiquitous that it has become the benchmark for similar investments.

And it’s exactly the kind of holding that keeps a portfolio humming.

AT&T enjoys a virtual duopoly with rival Verizon Communications (VZ) in telecom, which has become a utility both in its necessity and its ability to generate steady (and steadily rising) income. Short of an unforeseen change in the way humans communicate – like telekinesis – the need for mobile connectivity and internet service isn’t going anywhere. Meanwhile, the U.S. telecom market is completely saturated at this point, but there are few true competitors left – Sprint (S) and T-Mobile (TMUS) barely keep AT&T and Verizon on their toes.

AT&T also has growth avenues, such as its buyout of DirecTV and its pending acquisition of Time Warner (TWX) that will get it into the media content game. But it’ll have that backstop of consistent telecom revenue coming in, fueling a healthy, stable dividend you can rely on when the going gets ugly.

AT&T (T): The Telecom Engine That Could 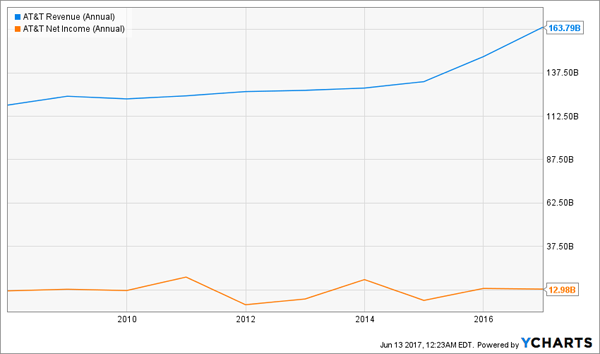 Self-storage REITs are running at a bit of a discount thanks to a selloff that followed years of breakneck gains. But the bull case still remains – storage is an excellent business in good times and bad. Is the economy strong? Consumers are buying, buying, buying … and need somewhere to store their excess bric-a-brac. Lousy economy? Americans forced to downsize their homes need somewhere to store their things until times perk up again.

The march of baby boomers into retirement age is also a key driver for self-storage, as many older Americans are starting to sell their larger homes but want to hold on to the things they’ve collected over the past few decades – all the better for storage REIT like Life Storage (LSI).

Life Storage – formerly Sovran Self Storage, which operated under the Uncle Bob’s banner – operates 650 facilities across 29 states. The company utilizes high-tech advancements to squeeze out profits, including a “Revenue Management Model” that LSI says will “continually monitor and adjust pricing for your stores, looking at current and forecasted demand, supply, price sensitivity and competition.”

LSI’s yield has expanded past 5% thanks to a yearlong selloff … but also thanks to a payout that has grown by nearly 50% in the past three years.

Life Storage Looks Like a (Cash) Hoarder to Me 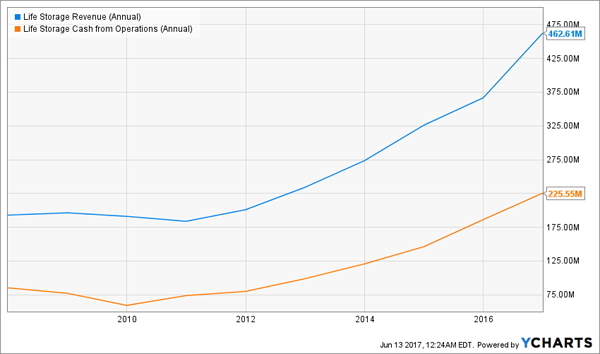 Blackstone Group (BX)
Dividend Yield: 6.4% (based on past four payments)

If you’re going to invest in private equity, Blackstone Group (BX) – which also offers financial and alternative asset management services – is one of the best.

Blackstone has scored numerous high-profile wins over its investing history, including its $26 billion leveraged buyout of Hilton (HLT), which it turned around in 2013 for what Bloomberg called “the most lucrative private equity deal ever, with a paper profit of $12 billion.”

And should the market crash, expect Blackstone to do what it did after the last market collapse – put its capital to work on buying deep discounts and turning disaster into gold. 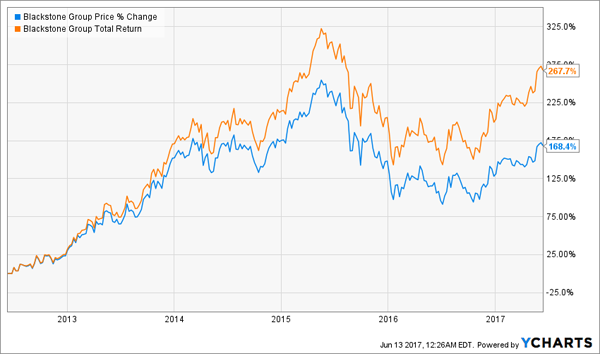 The Eaton Vance Enhanced Equity Income Fund II (EOS) is a closed-end fund that invests in mostly large- and mid-cap stocks with both strong growth prospects and sturdy financials, but also writes covered calls against those stocks to generate income.

As we’ve discussed before, writing covered calls is an excellent way to protect against flat and down markets by providing cash to make up for a lack of capital gains.

It’s fair to mention that EOS holds some of the aforementioned “FAAMG” stocks like Alphabet and Amazon, but it’s also loaded up on consumer discretionary, healthcare and industrial picks.

Despite EOS’ strategy, which limits upside for the sake of income and defense, it has outperformed the S&P 500 over the past few years, and should provide some cushion if the market takes a turn for the worse. 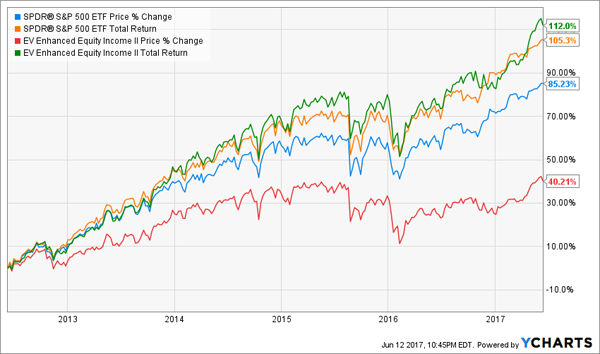 Lastly, what better way to play defense than with … propane?

If the name sounds familiar, Amerigas Partners is the name behind many of those propane cylinder exchange and refill stations you see at your local grocer or convenience store. However, Amerigas also provides propane for general home use to more rural areas of the country, as well as for customers such as restaurants, landscapers and even commercial vehicle fleets.

Like just about any energy company, APU will rise and fall along with the price of its underlying commodity, and like a gas utility, it will do much better in colder seasons when people are using more propane for heat. But it has a strong backing in the form of general partner UGI (UGI) and a better debt position than some of its industrymates. And of course, it has a stellar distribution that currently sits well north of 8% that has climbed higher for years – including through the 2008-09 market crash. I would merely suggest buying on dips at the lower end of its range, around $40.

APU is an obscenely boring play, but its high payout and secure business start to look mighty pretty when the market gets into a tizzy. 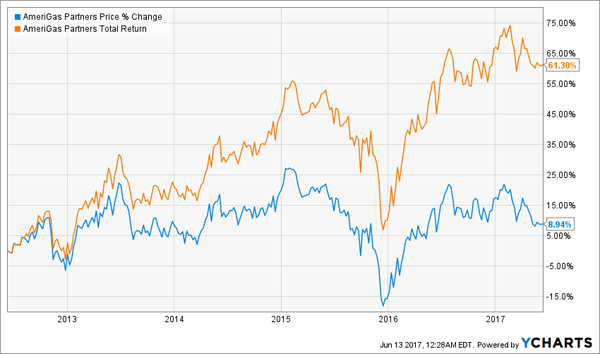 Bulletproof dividends will help you survive a crash with your portfolio intact, and that’s better than you can say about a lot of investors who go all-in on the market’s latest fads and throw caution to the wind.

But the only way you’ll make it all the way through retirement without ever touching your nest egg is to invest in more than “just” high yields. You also need dividend growth, and you need something that most pundits tend to ignore when it comes to retirement – capital gains.

In short, you need the “triple threat” stocks that fuel my 8%-yielding “No Withdrawal” retirement portfolio!

If you’re knee-deep in stocks with high income but decaying businesses, you’re probably looking at an actual average annual return of just 3% or 4%. Do the math on a nest egg of $500,000 and see how that plays out – just $20,000 in annual income at the high end!

You worked your tail off for decades. You deserve more out of retirement than to merely “get by.”

My “No Withdrawal” portfolio guarantees that you won’t have to settle for less during the most important years of your life by providing an 8% yield you can live off while growing your nest egg. While it took several months of digging through a number of high-dividend duds, I’ve weeded out the yield traps and come up with an “ultimate” dividend portfolio that provides you with …

This portfolio will let you live off dividend income alone without ever touching your nest egg. That means you can pay all of your monthly bills without ever worrying about wrecking your retirement account if disaster strikes.