There’s really just one way to cushion your portfolio from this trade war.

It’s one of the oldest pieces of advice there is:

I know. You’ve heard that one tons of times before, right? Well, there’s a twist.

Because I’m not going to just tell you that you need to spread your money out among stocks and bonds, say. Or that you need to add more healthcare or tech stocks or (heaven forbid) low-yielding Treasury notes.

No way. I’m talking about diversifying between countries.

Because the truth is, most Americans have too little exposure to the rest of the world in their portfolios. That means they’re not only putting all their eggs in the US basket (as strong and diverse as our economy is), but they’re missing out on some of the biggest dividends in the world, too.

Here’s something most people don’t realize: you can grab big dividends from emerging countries, like the incredible 14.5% payout on one of the funds I’ll show you in a moment.

You’ve no doubt read that a growing number of economists argue that tariffs will hurt America more than anyone else.

That idea is debatable, but there’s no doubt that this fear has been driving a lot of market sentiment, dragging the S&P 500 nearly 4% off its year-to-date high. And even though stocks have risen this year, they’re still lower than they were in September 2018, when the bear market officially began.

So if you’re worried about another bear market in the US, moving at least some of your portfolio into emerging markets might be the way to go.

And as I write, there are 21 high-yielding closed-end funds (CEFs) specializing in emerging markets, and five of them not only have incredible track records but also pay huge dividends: I’m talking 8% payouts and more. Let’s dive into those five now.

Emerging-Market CEF No. 1: 8.5% Dividends From a Resilient China

Obviously, the trade wars are focusing on China, and China is playing for keeps. If you think China will win the trade war (or will at least hold its own and go on to longer-term prosperity), our first high-yield CEF is for you.

It’s the Morgan Stanley China Fund (CAF) and, thanks to the trade war, it’s available at a wide discount. With its 12.8% annualized return on NAV since inception and an 8.4% dividend yield, this is a high-flyer that deserves serious attention.

A Long Run Up 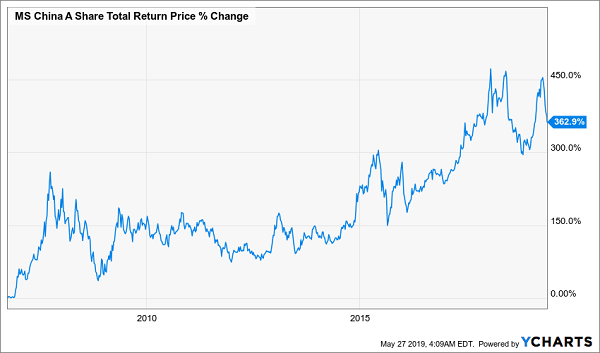 Yet the skittish market has penalized that massive performance, with CAF priced at a 12.2% discount to NAV, much lower than the 8.7% discount it had before trade-war fears flared up in recent weeks.

Emerging-Market CEF No. 2: An Asian Fund With an Astounding 11.5% Dividend

Another theory about the trade war is that Asia will pick up steam, as US tariffs prompt China to look more to its neighbors, driving higher growth region-wide.

If you think this is in the cards, consider the Templeton Dragon Fund (TDF), which canvasses Asia for the best investment opportunities and pays a generous 11.5% yield. TDF has a great long-term track record, too, yet it trades at a wide 11.9% discount to NAV.

A Huge Return With a Long History 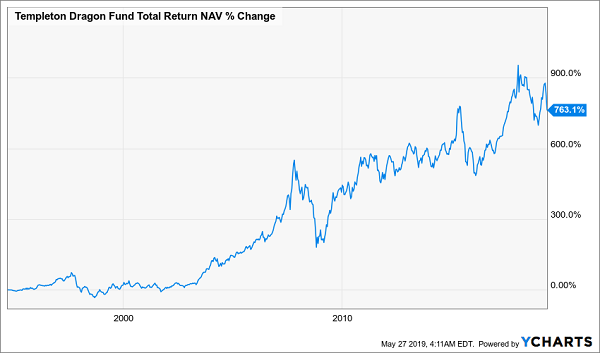 With this kind of long-term track record, TDF doesn’t deserve the big discount it currently sports.

Another theory goes that the trade war will exacerbate problems in China and America, causing problems for both sides. If you think this, you might want to look at India, which is growing strongly and has mostly avoided attention.

That’s despite recent headlines that India has been removed from a program that lets it export $6 billion of goods into the US duty free. But bear in mind that this only represents less than 11% of India’s exports to the US, not including services.

Still growing at over 6% annually, India’s GDP hasn’t been affected one bit by growing China/US tensions, and Indian prime minister Modi has gotten high marks from just about everyone for his focus on delivering growth. That has kept Indian companies’ sales rising, and that trend could get stronger if business flees to India to avoid the China/US trade war.

There are two CEFs that let you invest in India: the Morgan Stanley India Investment Fund (IIF) and the India Fund (IFN). Both have delivered annualized returns a bit above 9% since inception, along with some very high yields. 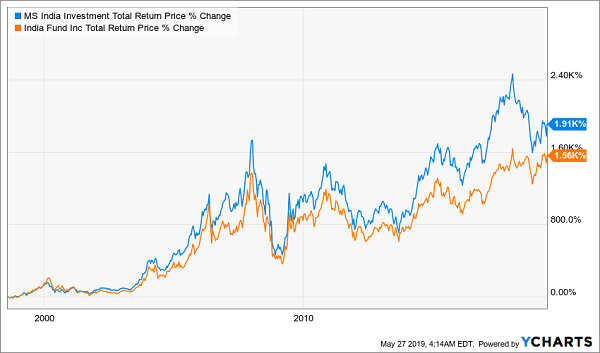 While IFN’s 11.5% dividend yield seems insane by any measure, IIF’s 14.3% distribution is off the charts. Keep in mind that these rates are highly volatile, since these funds can, and do, change their distributions often. But both funds still boast long records of high dividends that any income investor can appreciate.

If you want broad access to a range of emerging markets, consider the Templeton Emerging Markets Income Fund (TEI), which has a 10% discount to NAV, despite its 8.3% return on NAV since inception.

Since TEI focuses on bonds, it’s a safer buy than an equity fund, and it pays a solid 7.9% dividend. That bond exposure also lowers your risk, since bonds are less volatile than stocks—but that doesn’t mean TEI sacrifices performance, as you can see from its long-term track record:

Triple-Digit Gains and Diversification in 1 Buy 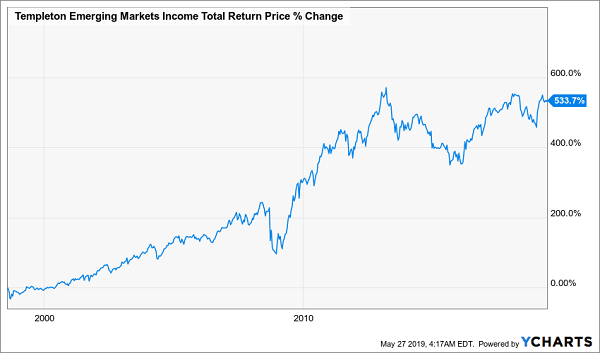 TEI, like its China-focused sister fund, TDF, has proven its mettle over the long haul, making it an attractive way to add emerging-market exposure to your portfolio.

Meanwhile, back in the US …

I’ve uncovered 5 domestic closed-end funds that are “spring loaded” to outperform in the long haul—while holding their own when the market takes its next tumble.

I can’t say enough about these discounts to NAV—which only exist with CEFs—because they let us instantly spot a bargain. And often these cheap funds have crushed the market, giving us even more confidence.

Imagine This Fund in Your Portfolio 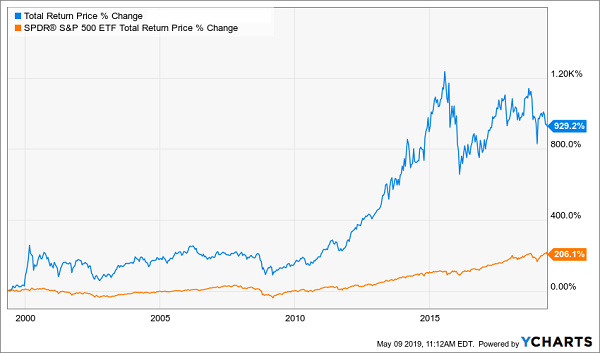 But here’s the crazy thing: as I write, this one trades at an 8% discount to NAV! Considering that it’s traded at a premium many times in its lifetime, that points to just one thing:

(I’m calling for 20% upside from here, to be precise—in addition to those hefty 8%+ dividends.)

Click here to get everything you need to know about these 5 stout 8%+ paying CEFs—names, tickers, buy-under prices and my complete research on each one—right now.