7 REITs (Paying Up to 8%) With Big Dividend Raises Coming

“First-level” investors – those who buy and sell on headlines – mistakenly believe that real estate investment trust (REIT) profits will suffer if rates continue to rise. They’re wrong. This is actually an ideal time to buy the strongest names in the sector.

Note that I said strongest. The sector’s popular proxy is something you should avoid, despite its popularity. I’ll call it out in a moment.

Overall, rising rates are actually good for the best REITs because it signals a rolling economy. These landlords have no problem raising their rents when their tenants are making money.

Unfortunately, the business world is increasingly becoming a neighborhood of “haves” and “have nots.” And some REITs are not doing well, despite the broader tailwinds.

Take the Vanguard REIT ETF (VNQ), which is now paying its highest current yield  since 2009. Buy the dip? No way. Its annual payout actually declined in 2017 year-over-year! 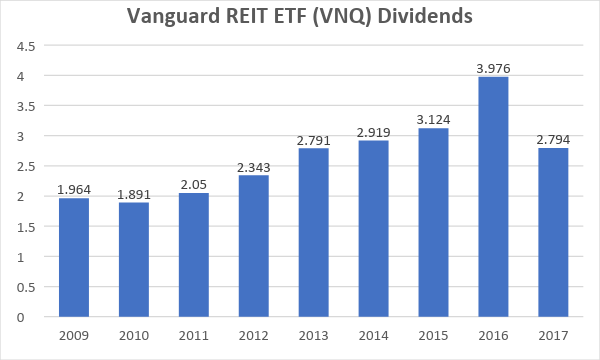 One year of Amazon-powered disruption, and VNQ’s dividends are back to their 2013 levels. Yikes.

But VNQ is, of course, a flawed index. It’s “low cost” – but so what? Investors who buy it are getting what they pay for.

A better idea is to cherry pick the firms who do have booming businesses that are not being eaten alive by Jeff Bezos & Co. Here are seven landlords who own their respective property niches. These stocks pay up to 8%. All have dividend upside to boot.

American Tower (AMT) may have one of the smallest yields in the REIT space, but it also has one of the most impressive dividend growth streaks in the entire real estate sector.

Namely, AMT has increased its quarterly payout for 25 consecutive quarters.

American Tower is at the attractive crossroads of technology and real estate, owning and operating wireless and broadcast towers, as well as other telecommunications infrastructure, in the U.S. and abroad. In short, it helps companies such as Verizon (VZ) and AT&T (T) connect tens of millions of Americans with voice and internet service.

But unlike Verizon and AT&T, American Tower is very much a growth story. The company’s revenues and funds from operations (FFO) have been consistently climbing for years, and 2017 saw another blowout performance from this telecom REIT. The top line exploded by 15.2% to $6.7 billion, while consolidated adjusted FFO jumped 16.5% to $2.9 billion. That allowed the company to grow its dividend by nearly 20% across four separate increases.

And with deals such as an agreement with Vodafone (VOD) and Idea Cellular to widen its exposure in India by roughly a third, that growth path should continue. 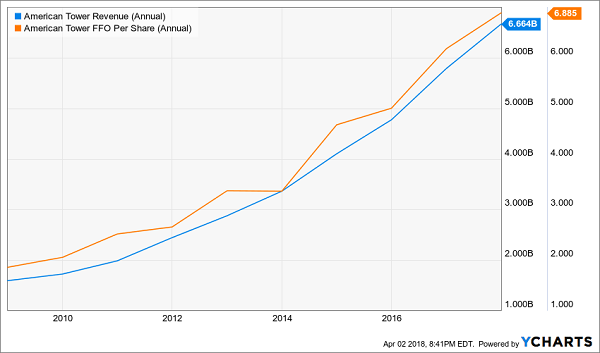 Alexandria Real Estate Equities (ARE) is one of the most niche but intriguing office REITs on the market. This company focuses on life sciences real estate, specifically focusing its efforts on industry business clusters.

Better still, the company has grown its payout for years, sometimes multiple times within the same year, including a 7% bump across two hikes in 2017. And the below chart shows exactly what you should expect – that is, dividend growth being rewarded by share-price growth almost identically over time.

As Alexandria Real Estate’s (ARE) Dividend Goes, So Go Its Shares 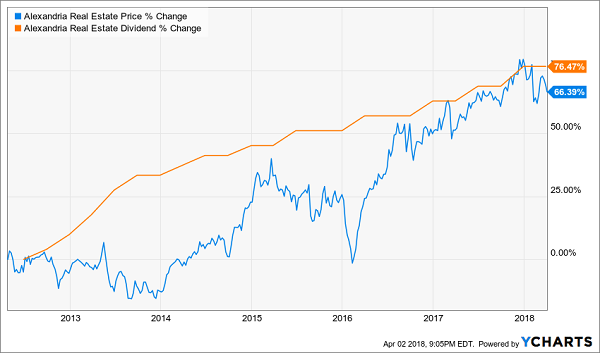 But Regency has some angles that may help buffer it from Amazon.

Regency’s portfolio consists of 426 properties encompassing 59 million square feet. As of the company’s fourth-quarter 2017 investor presentation, some 96.3% of the properties were leased, with 80% of properties anchored by a grocery store. And REG boasts an average of “138,000 people and $110,000 average incomes in Gateway, 18+ Hour and select growth markets.”

Grocery stores do provide much-needed foot traffic to shopping centers, and Regency’s grocery sales in specific are significantly better than its peers. That hasn’t stopped Wall Street from selling Regency off alongside the narrative. Shares have been hammered by about 30% since mid-2016, roughly doubling the losses of the VNQ.

But Regency is making smart moves, including clipping away at its interest costs via changes to its unsecured revolving credit facility, and it continues to get cheaper by the day, now trading at about 19 times FFO. That’s not exactly cheap for a company that ultimately still plays in the troubled retail space, but REG might be one of the best of a bad breed. Also heartening is a small stretch of consecutive dividend improvements starting in 2014.

Summit Hotel Properties (INN), like Regency, has received more than its share of losses, getting knocked down by more than 30% since summer 2017. And also like Regency, Summit is starting to look increasingly appealing as its price is whittled away.

Summit is one of several plays that center around the growing trend of the “experience economy,” in which Americans (especially Millennials) are increasingly valuing experiences such as travel over “stuff.” And importantly, Summit is a play on the wealthier individuals within this economy.

INN owns 83 hotels under the Marriott (MAR), Hilton (HLT) and InterContinental Hotels (IHG) brands, as well as under a Hyatt Hotels (H) affiliate. The portfolio spans 26 states, with 89% located in the top 50 metropolitan statistical areas; 96% is within the top 100. The company is rapidly upgrading its portfolio, too, including a $163 million, five-hotel acquisition from Xenia Hotels & Resorts (XHR) in June 2017, and a $164 million, four-hotel buyout in November of last year spanning Yale, Boston, Cleveland and Tuscon.

While several hotel REITs struggled in 2017, Summit put up an 8.4% improvement in its adjusted FFO for the full 12 months. That served as a springboard for another increase to the quarterly dividend – its fourth since 2016, when it began improving its payout after years of stagnation.

That payout is easily covered, too, at just 54% of its FFO. And shares are cheap, trading for just 10 times FFO. 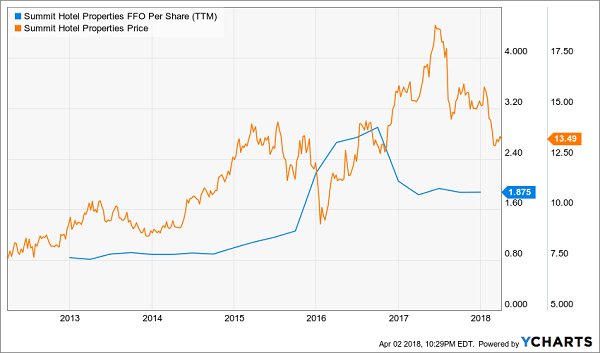 One Liberty Properties (OLP) is a diversified small-cap net-lease REIT that’s primarily retail in nature, but also features a significant chunk of industrial real estate. Its 118 properties across 30 states include name-brand tenants such as FedEx (FDX), Haverty Furniture (HVT), Whole Foods, Walgreens (WBA) and Wendy’s (WEN), not to mention numerous industrial operators that are less familiar to consumers.

Tenant concentration is a little on the high side, with the top five composing more than a fifth of One Liberty’s contractual rental income, but there’s little concentration risk. The same can be said about geography, with Texas the top state holding at 12% of the portfolio.

Again, retail is problematic at present, but many of OLP’s individual tenants aren’t at as much risk from the likes of Amazon as many mall retailers. And operationally speaking, One Liberty has been solid for years, with 2017 serving as no exception. Rental income improved by 6.2% to $68.2 million, and adjusted funds from operations grew 5% to $2.09 per share.

Moreover, the dividend has been increased for a sixth consecutive year, and unlike many other REITs whose yields have been driven higher by large declines, OLP isn’t prone to big swings – in either direction.

OLP provides strong total returns thanks to its massive 8% dividend, but Wall Street has stubbornly refused for years to recognize One Liberty’s business success.

My favorite commercial real estate lender lets us play Monopoly from the convenience of our brokerage accounts. They do all the legwork, building a secure, diversified loan portfolio featuring offices, retail space, hotels and multifamily units.

Management then collects the monthly payments, deposits the checks

– and then it sends most of the profits our way as dividends (a requirement of its REIT status).

The stock’s current dividend (a 7.7% yield today) is covered by earnings-per-share (EPS) today. And don’t be fooled by the stagnant dividend (not that stability is bad). The firm continues to originate an increasing number of loans: 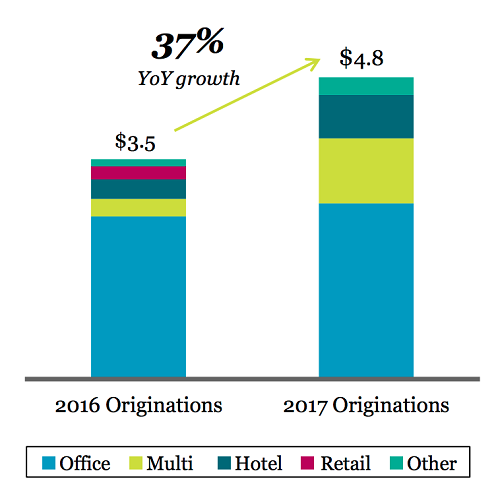 This firm is a conservative lender with perfect loan performance (100%). Its growing portfolio will drive higher profits, which in turn will inspire the next dividend hike. The best time to buy the stock is right now, as it makes the investments which will drive its payout and share price higher from here.

Plus this firm has also smartly eliminated interest rate risk because it uses floating rates. In fact, it’s actually set up to make more money as interest rates move higher: 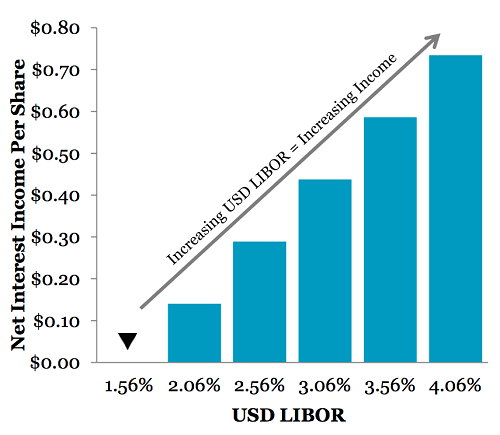 Same for another REIT favorite of mine, a 7.5% payer backed by an unstoppable demographic trend that will deliver growing dividends for the next 30 years. Interest rates are no problem for this landlord because it will simply continue raising the rents on its “must have” facilities.

Its founder Ed Aldag admitted that, fourteen years ago, he had “zero assets, a dream, and a business plan.”

Well his dream and plan were plenty – Ed parlayed them into $6.7+ billion in assets!

And right now is the best time yet to “bet on Ed” because his growing base of assets is generating higher and higher cash flows, powering an accelerating dividend: 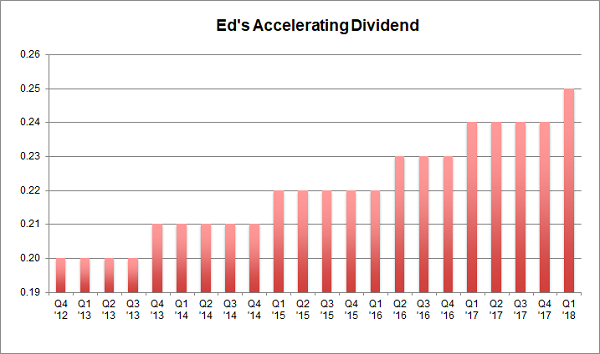 I love dividend increases because they are proof that management is actually making more money, so can afford to pay us shareholders more. And an accelerating payout is a flat out cry for help!

Any management team that raises its dividend faster and faster is clearly making more money than it knows what to do with. This usually happens when it achieves a tipping point where its machine no longer requires as much reinvestment to continue growing. So leadership says: “Please, take a bigger raise, shareholders.”

Meanwhile investors and money managers who spot dividend accelerators lose their minds because, in theory, there is no valuation too high for a company that is increasing its dividend at an accelerating rate. Their spreadsheets literally break, and they buy the stock in a frenzy.

Ed’s stock should be owned by any serious dividend investor for three simple reasons:

But I would like to send you a free copy of my latest special report, Recession Proof REITs: 2 Plays With 7.5%+ Yields and 25% Upside, with all the details.

In short, it’s everything you need to know before you invest a single penny, and it’s yours at no cost whatsoever.

Click here and I’ll send you the free copy of my latest special report which highlights these 2 timely REIT plays.