9 Dividends Stocks To China-Proof Your Portfolio

China’s financial grease fire has officially spread to American stocks. If your portfolio isn’t yet “China-proof” then you’d better protect yourself now. Sell your dividend-paying disasters and get your capital into issues that do pay yields but aren’t hooked on dragon dust.

I get it – you probably didn’t think good ol’ U.S dividend-paying stocks would get crushed like this. They do outperform the market over time, after all.

Problem is, not all stated yields can be taken “as is.” For example, the big oil and BDC dividend dogs that I warned you about last month are underperforming in an already-bad market. They’ve lost an average 10.6% just 8 trading days into the year!

Hopefully You Sold These Disasters As Discussed… 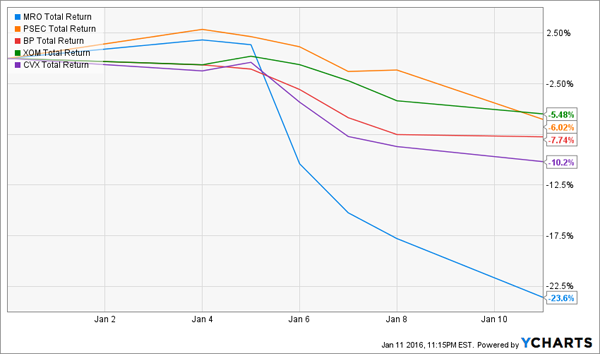 While these “paper payout tigers” are getting trashed along with China, oil, and most other stocks, there are three dividend-paying sectors that are doing just fine. China’s stock market could shut down for the rest of the year and it wouldn’t affect these issues one bit – or their dividends.

Which is impressive. With China down a breathtaking 15% year-to-date, and the S&P down 6% already, these stocks and funds are all in the green for 2016. Quite a show of strength that’s deserving of your income investing consideration. Let’s start with the most tax-advantaged of the lot.

Muni bonds are issued by states, cities, and counties to raise money for capital projects. They’re usually tax-advantaged at the federal level, and state too, if you live where the bonds are issued.

Every few years, investors lose their minds and worry that the muni market is going to implode. Their most recent all-out panic graced us in mid-2013 when Detroit went down. Investors fled fearing a contagion that never happened – just 0.17% of muni bonds defaulted in 2014.

Since then, the sector has rebounded steadily. The last good buying opportunity was last year, brought to us briefly by Puerto Rico. For now, investors seem to be keeping calm and carrying on. I prefer to buy muni issues when they’re out of favor rather than in – yields are higher, and prices are cheaper.

Here are three high quality muni funds for your watch list. They’re not quite in my buy range today –but they probably will be after the next high profile default, so stay tuned.

All three funds are in positive territory for 2016, and they’ve whipped the S&P 500 over the last two years. The Nuveen Municipal Value Fund (NUV) is an unlevered fund paying 3.8%, while the BlackRock Municipal Target Term Trust (BTT) pays 4.4% and the Nuveen Municipal Opportunity Fund (NIO) pays 6% (both thanks to leverage). 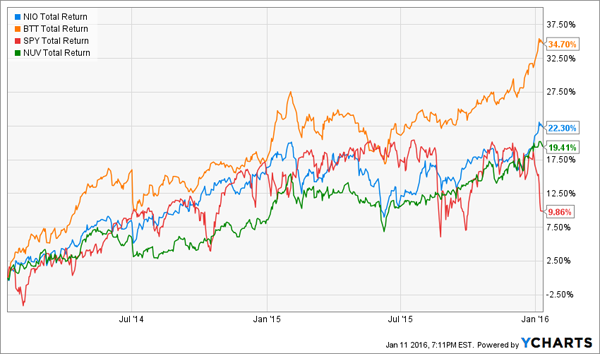 While the economic health of China’s middle class may be up for debate, their Western counterparts scramble for places to stash all their “stuff.” After all, why have a garage sale when you can pay a modest monthly rental fee for self-storage space?

Occupancy levels in self-storage facilities are now north of 90%. Not only can owners rent their units easily, but they can also raise the rent every year – by 3% or more annually, on average. And they’re great businesses to own, as these buildings don’t require much upkeep or reinvestment.

These factors have powered triple-digit profit increases for landlords in the space over the last few years. The largest companies are structured as real estate investment trusts (REITs) – they pay out most of their earnings as dividends so that they don’t have to pay taxes. A nice luxury of not having to reinvest earnings to grow the business!

As profits have skyrocketed, so have their payouts to investors. Three of the largest public payers in the space – Public Storage (PSA), CubeSmart (CUBE), and Extra Space Storage (EXR) have increased their dividends by 112%, 200%, and 321% respectively over the last five years! 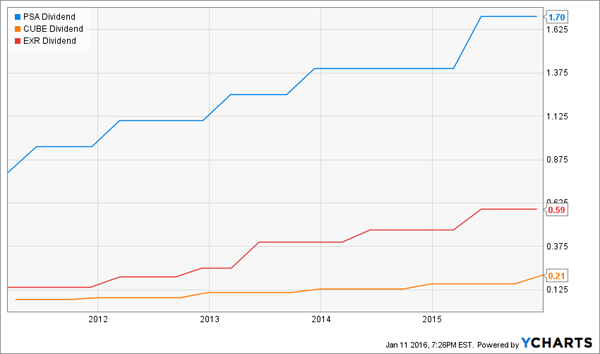 All three stocks are in positive territory year-to-date, and all three have delivered triple-digit returns to investors over the last five years (even outpacing their torrid dividend growth).

PSA gets all the attention, being the largest owner in the space with more than 2,200 locations. But its current 2.6% dividend is near the low end of where it’s been over the last five years, and analysts are projecting earnings growth only around 10%. Slowing profit growth means PSA may struggle to merely double its dividend (to 5%) within a reasonable timeframe.

EXR is the most compelling of the three. It pays 2.6% as well, and is projected to grow profits by 22% in 2016. A corresponding dividend hike should follow. At this rate, new investors will be earning 5% dividends on their initial stakes within three years or so.

My only worry is that the baby boomers – who have accumulated the most stuff on the history of the planet – will begin to downsize their lifestyle for the first time in their lives. They’re already looking to simplify – get rid of all that “stuff” while they sell their house in the suburbs and purchase (or rent) a townhouse closer to downtown.

REITs on the Right Side of the Boomer Demographic Shift

According to social security eligibility, 3.6 million baby boomers are now reaching full retirement age every single year. That’s 10,000 boomers every day, or 416 every hour… or one every 9 seconds. And this trend will continue every single day for the next 15 years.

By 2024, national healthcare expenditures are expected to climb $5.43 trillion, or about 20% of GDP. This colossal spending will be driven in large part by the increasing demands and expectations of the massive boomer demographic.

Older adults spend 5-times as much on healthcare as other adults. Which means, as the boomers unload their stuff, they’ll be spending heavily on their own well-being.

Healthcare REITs are uniquely positioned to take advantage of this demographic trend. In September, I mentioned three of them: Healthcare REIT (HCN), Ventas (VTR), and Healthcare Realty Trust (HR). They were trading at nice discounts thanks to the Fed-related rate hike fears.

Since then, all three have beat the S&P 500, returning an average 7.4% versus a flat market.

Like the self-storage REITs, VTR and HCN have a strong history of increasing their dividends. And they’re perfectly positioned to capitalize on the next phase of boomer spending.

Of the three, I like VTR the best right now. Over the last 15 years, management has hiked its dividend by an amazing 400%. However shares only pay 5.4% today – I prefer to buy them when yielding 6% or better (as they were briefly last fall).

If you’re looking for a place to put new money to work right now, I prefer another healthcare REIT that’s actually run by VTR veterans. It’s a relatively new company – so it doesn’t have much analyst coverage yet. That’s perfect, because it pays a fat 7.5% yield today.

The best time to buy this stock is right now. It’s cheap thanks to interest rate fears, and the fact that nobody really knows about it. That will change sooner rather than later. Get the name and ticker of the company – along with the full backstory on two more “China-proof” healthcare REITs that I love for 2016.