A “Heads You Win, Tails You Win” Way to Play the Recession (With a 7.3% Dividend)

A recession is on the way—and stocks are … rallying? It makes zero sense on the surface, but there is good reason for the bounce we’ve seen this week. And we’re going to play it with a 7.3%-paying fund that’s set to roll higher with a recovering market.

No, we’re not talking about an index fund like the SPDR S&P 500 Trust ETF (SPY). My colleague Brett Owens calls SPY “America’s ticker” for good reason: pretty well everyone owns it!

Instead we’re going with a fund that pays us a 7.3% dividend today. That’s more than 4-times SPY’s meager 1.7% payout. And this fund profits from volatility, which, despite the bounce, is likely to stick around.

First, I want to give you my outlook for this new market rally.

The upshot? What we have in front of us now is a near perfect setup for the fund we’ll get into below—a special kind of fund called a “covered-call fund,” and an even better one for the covered-call CEFs in the portfolio of our CEF Insider service.

Memories of Recessions Past

You’ve probably heard the media chirping about the latest prediction from Bloomberg Economics: that we face a 100% chance of a recession in 2023.

Honestly, they’re likely right, but that prediction is less important than the fact that, unlike any recession in a generation, the pain is already priced into stocks. 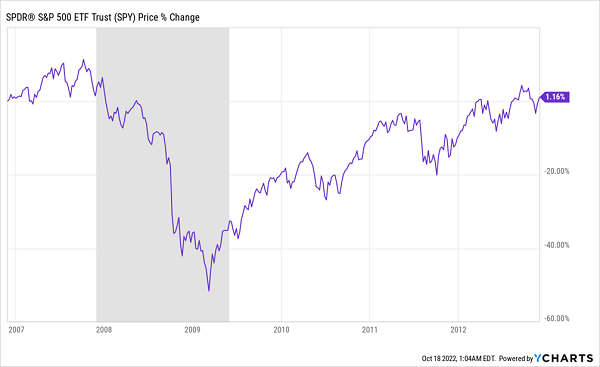 Consider that in the first 12 months before the 2008 crisis hit, markets were humming along. The S&P 500 rose over 10% within a year before starting to wobble in late 2007, and even then, it didn’t go into bear territory until late 2008.

This time around, however, the benchmark index is well down (as we know!), suggesting a recession is already priced in.

Unlike in ’08, Stocks Expect the Worst This Time 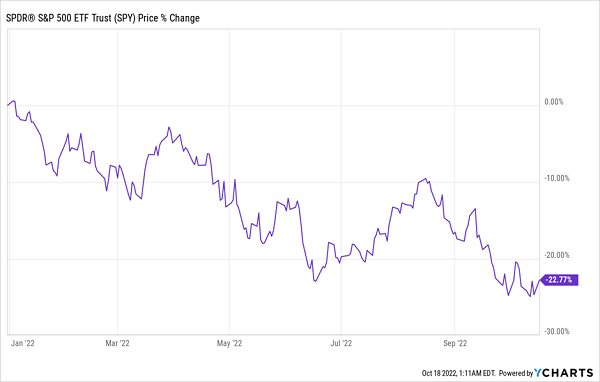 With the S&P 500 already in bear market territory, stocks have priced in a recession before the recession has begun. That means an economic contraction is the base case for markets. The flipside of that, as we contrarians know, is that any slight brightening of the outlook is enough to spark a rally.

And there’s reason to believe the picture could indeed be brighter than markets think, giving us a better chance at some nice upside (with a “side” of 7.3% dividends, as we’ll see in a second).

Let me show you where that good news may come from, starting with the nation’s debt picture.

Debt Worries Are Only Half the Story

Because interest rates are rising and debt is getting more expensive, a look at debt balances should be our first stop in determining the health of the US economy. And on that scale, total debt is up to a bit over $16 trillion from $11.4 trillion a decade ago. That’s a 42% increase in just 10 years.

But debt only gets you half the picture. Let’s say that I told you that I knew of someone who borrowed $6 million to buy a house. On that information alone, you might think that this person was wracked with debt due to overspending. But if I told you that this man was Mark Zuckerberg, and that $6 million was a microscopic portion of his net worth, you’d have a different opinion. The point here is that we always need to look at debt in relation to wealth.

So let’s do that.

Wealth Soars—Even With the 2022 Pullback

Obviously, falling stock and bond prices have hit the country’s wealth this year, but even so, the net worth of all households in America has soared to $136 trillion, for a 108% gain in a decade. That also means the average American is a third less indebted than they were a decade ago. 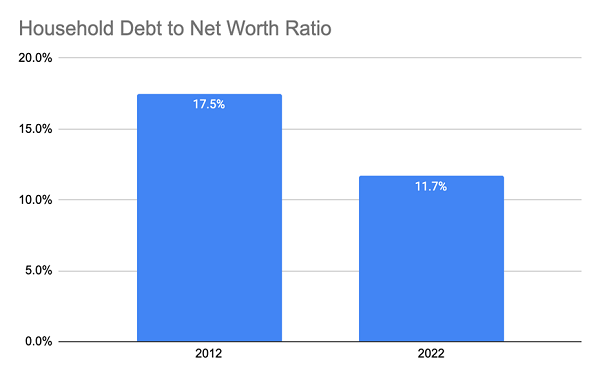 Yes, the interest rates on those debts are getting pricier, but Americans are in a better position to handle those debts than they have been throughout most of history. This is why a slowdown in the economy, even a deep and steep recession, is likely to be less painful in 2023 than it was in 2008.

But you’d never know it by the market’s performance this year. 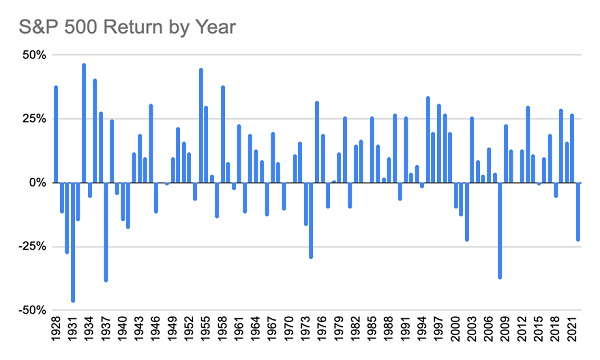 Looking back to the Great Depression, only five years on record are worse than 2022. And if we remove the pre-WWII years, only two years are worse than this one: 1974 and 2008. Of those two, 1974 looks most like 2022. Back then, an OPEC embargo caused energy scarcity in the US, along with shortages of all kinds of goods.

The difference today is that we’ve already seen signs that shortages are easing, particularly for food and fuel (the biggest drivers of inflation in the 1970s). Meanwhile, America now generates more oil than it uses, meaning an OPEC embargo is hardly a concern now. We can see that in recent falling oil prices.

So where does this leave us? The long-term trend of a lower debt-to-wealth ratio, higher income, lower energy prices and higher productivity are signs that a US recession could be milder than what’s currently priced in.

And we CEF investors are blessed with a way to profit: covered-call funds like the one we’ll talk about now (and those that populate the portfolio of CEF Insider).

Profit From Volatility and a Recovery With SPXX

The Nuveen S&P 500 Dynamic Overwrite Fund (SPXX) is like “America’s ticker” SPY in one way: it holds all the stocks in the S&P 500, as the name suggests.

That means you might not need to change your current investments to get SPXX and its 7.3% dividend. Just “swap” your current holdings of Microsoft (MSFT), Apple (AAPL), Visa (V) or whatever for this fund.

You’re also getting these stocks after they’ve sold off and are priced for a major recession. Plus, SPXX’s income stream is backed by the fund’s covered-call strategy, which profits from higher volatility. (Under this strategy, the fund sells call options on its portfolio and gets cash premiums in return, no matter what the outcome of the option trade.)

That’s a nice setup for now, with a (still) oversold market and a good chance of volatility in the near term, as uncertainty continues to hang over the Fed’s next moves.

The only thing that keeps me from recommending SPXX is that the fund trades at a 10% premium to NAV (CEF-speak for saying it trades for 10% more than its portfolio is worth).

When it comes to CEFs, we always demand a discount—and that’s what you get when you buy the 5 other CEFs I’m urging investors to buy now. Together, they form a “mini-portfolio” that yields 9.1% today. And these 5 are so far down in the bargain bin that I expect 20%+ price upside from all of them 12 months out from now.

And that’s in addition to the rich—and SAFE—9.1% dividend we’ll be pocketing!

Click here and I’ll tell you the full story behind this unique collection of income plays. I’ll also GIVE you their names, tickers, current yields, discounts and more in an exclusive Special Report.