What are we dividend investors to expect in 2021? Let’s look to Washington, DC, where the switch on Jay Powell’s printing press is stuck in “high”: 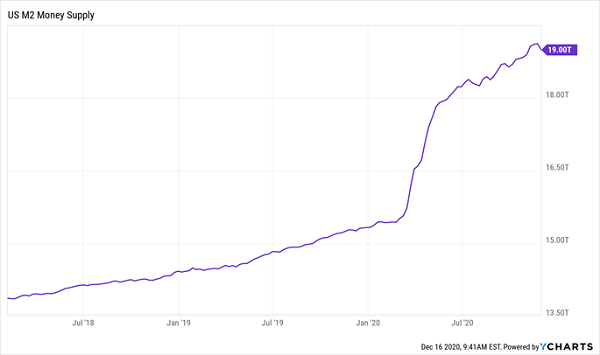 With Powell’s fiat money keeping (what’s left of) the Main Street economy afloat, you can bet that his “instant” cash will keep rolling in. He’ll have a willing partner in incoming Treasury Secretary Janet Yellen, who followed the same strategy when she was Fed chair: 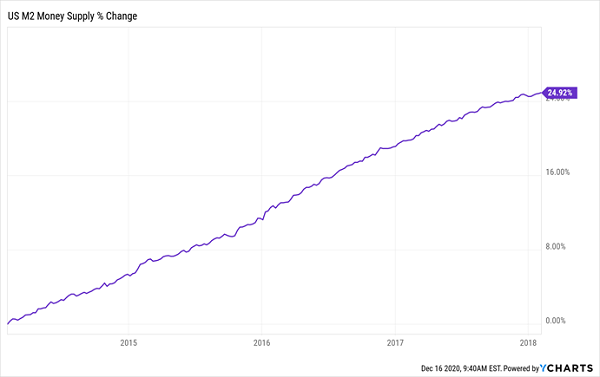 This is a recipe for inflation once the economy gets back on its feet. Back in September, we discussed some stocks that make solid inflation hedges by hiking their dividends faster than prices (and inevitably, interest rates) rise.

But today we’re going to look at a move we can make in the short term—I’m talking right now and in the opening months of 2021.

The first thing to note is that, despite Powell’s prolific “efforts,” inflation is in the tank and interest rates are basically nil. That’s pushed more people into stocks, because when you’re on the hunt for income, a 0.9%-yielding Treasury note can’t hold a candle to a dividend-paying stock, even the misers of the S&P 500, which typically dribble out lame 2% to 3% dividends.

We can argue about whether the stock market is in a bubble, but one thing that’s certainly true is that you and I aren’t retiring on those pathetic yields.

However there is one group of investments that are custom-built for an environment like this: closed-end funds (CEFs). These unique income plays give you:

Let’s take that second point first: in CEF-speak, these discounts are known as the “discount to NAV,” or net asset value. It’s a quirk of CEFs that tells you at a glance whether a fund is cheap or pricey.

It works like this: once a CEF is launched, the fund can’t issue new shares to new investors, which means it will have roughly the same number of shares outstanding for its entire life. That means the fund’s price fluctuates purely based on investor buys and sells, so its price can, and usually does, trade at different levels to its NAV.

When the market price moves below NAV, you’ve got a discount. And when that discount gets unusually deep, that’s the time to strike—and book gains as the discount reverts back to its usual level.

In February 2016, I recommended UTF when it traded at a ridiculous 16% discount to NAV. By the time we sold in December 2019, UTF’s market price had nearly doubled, surging 95% from our buy date.

The discount? It bubbled away to just 4%, pulling the share price along for the ride. You can see this happening below (the eroding discount is in orange):

A Classic Closing-Discount Play in Action 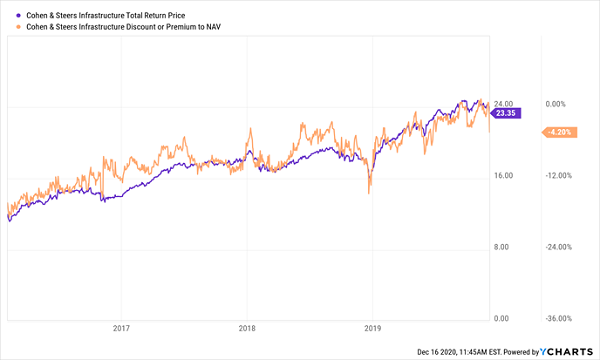 The nice thing is, you often don’t even have to wait this long for a fund’s “discount slingshot” to kick in: the same thing happened with the Nuveen NASDAQ Dynamic Overwrite Fund (QQQX), which delivered a big return—42% in this case—in just 15 months!

QQQX, which yields 6.2% today, is a bit like an ETF in that it aims to track an index—in this case the NASDAQ 100. As such, its portfolio is riven with tech giants: top-five holdings include Apple (AAPL), Microsoft (MSFT), Amazon.com (AMZN), Alphabet (GOOGL) and Facebook (FB). The main difference is that, to generate extra income, QQQX sells call options on its portfolio.

When I recommended QQQX in January 2017, it traded at a 4.8% discount to NAV. Here’s what happened between then and when we sold in April 2018:

Discount Flips to a Big Premium … 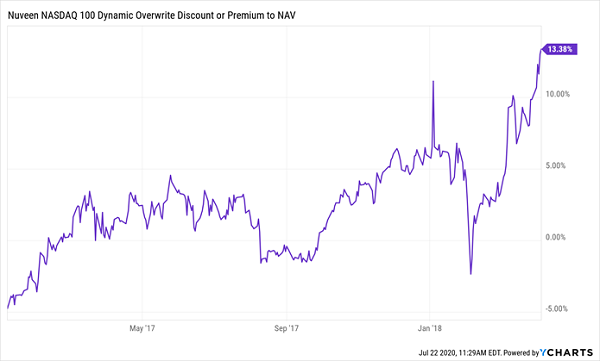 That’s a massive swing: in just 15 months, QQQX went from a 4.8% discount to a 13.4% premium. The arrival of that ridiculous premium was our cue to exit, so we did, taking our 42% return with us.

… And Ignites Our Returns 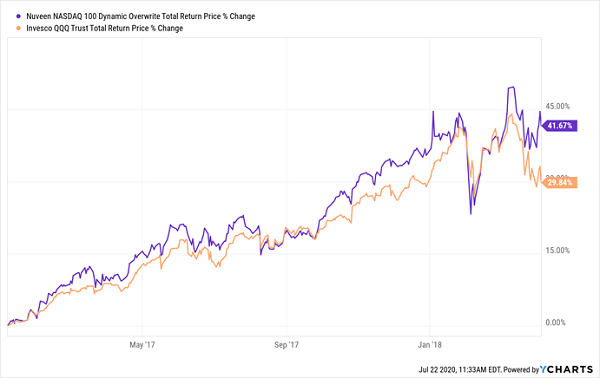 Let’s stick with QQQX for a second more, because what happened after we sold demonstrates the dangers of overpaying for a CEF and buying at a premium.

Since our sell date, QQQX’s premium has vanished—the fund trades at a 3% discount today. That’s acted like a lead weight on the share price, causing the fund to drastically underperform the benchmark tech ETF, the Invesco QQQ Trust (QQQ): 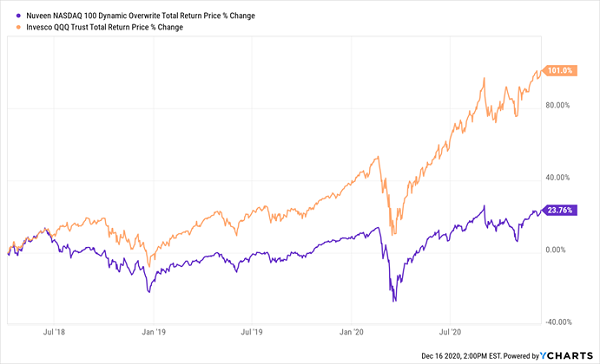 This ability to help us avoid losses and position ourselves for gains is what makes CEFs one of our best plays for 2020, with vaccines likely to kick-start the economy in the long run, but with more turbulence likely until we get to that point.

Urgent Note From the Publisher

I’m breaking in here to let you know that we’ve uncovered 5 great CEFs for the year ahead, because they all sport massive dividends and outsized discounts.

These 5 funds have been totally overlooked in the herd’s rush into stocks.

They yield an outsized 8%, on average, and that’s just the average! One of these stout income plays sends out an incredible 9.1% dividend—and it pays you monthly, too. Drop, say, $100K into this fund and $9,100 in dividend cash comes back to you every year.

Imagine what that could do for your retirement plans.

Due to these 5 funds’ massive discounts, we’ve got them pegged for gains of at least 20% in 2021. And if we do see another crash, these big discounts will help cushion these funds’ prices in a downturn.

These 5 funds come from Michael Foster, the investment strategist at our CEF Insider service. Michael focuses on CEFs with market caps under $1 billion—the sweet spot where the biggest gains, and dividends, in CEF-land live.

These funds are too small for Brett Owens to recommend to his thousands of Contrarian Income Report subscribers, because a group that big piling in at once would move the price—and not everyone would be able to get in at a discount.

That’s why we created CEF Insider. With its (deliberately) small membership, Michael can easily get into (and out of) these “small fry,” helping you capture some serious price upside in the process.

I could go on, but the best way for you to discover the profit-making power of smaller CEFs is to check them out for yourself. That’s why I’ve arranged a no-risk 60-day trial to CEF Insider for you. It comes your way along with the names and tickers of those 5 “win either way” CEFs I mentioned a second ago.

I’m ready to share everything with you now. Go here to get full details on these 5 high-yield funds and start your no-risk trial to CEF Insider.

One quick final note: as I just mentioned, we have to keep our CEF Insider membership small, so I’m only opening a limited number of spots today—and many of these seats have already been taken. Don’t miss your chance. Get everything you need to know right now.