If you’re like, well, everybody, you’ve been mulling these three questions lately:

Is this “tariff tantrum” the end of the bull market? Is it time to sell? Or buy more?

I’ll deal with the first question in a second. Meantime, let’s start with the second one: no, it is not time to sell. Because after all, we need to stay invested to keep our dividend checks rolling in.

Yes, it’s still a great time to buy—especially in one corner of the market where 6%+ dividends are everywhere: closed-end funds (CEFs).

In a moment, I’ll reveal a CEF whose yield recently soared to nearly 7%! That makes it more than worth your attention, as buying now lets you “lock in” that payout before the next rebound drives the share price up—and the yield down as the stock climbs.

Before we get to that, though, let’s dive into what this trade melee means, and doesn’t mean, for stocks.

This Economy Is Already “Tariff-Tested”

The market has clearly spoken, and it hates the new 25% tariffs on $540 billion in Chinese imports. After all, tariffs raise prices on consumers and sideswipe growth, right?

Well, it’s not that simple.

Consider the previous round of tariffs: at 10%, they didn’t result in higher prices (inflation has actually slowed in the last three months). They didn’t hurt GDP growth, either: first-quarter GDP was up 3.2%, blowing away expectations of 2%.

And while it may be true that the economy could handle 10% tariffs, and not necessarily these far bigger 25% tariffs, that argument misses the point. The thing to keep in mind here is that this market’s reaction to the new tariffs is just plain silly.

That’s where our opportunity comes in.

Here’s what I mean: in total, the tariffs will increase the cost of Chinese imports by $80.9 billion. That may sound like a lot, but it’s just 0.4% of America’s GDP—so tiny it’s almost unmeasurable!

Still if the market wants to price in the risk of a shakier economy that’s fine: but how big should that discount be? There’s no right answer to that, but I can tell you the wrong one: the amount that stocks have already lost. 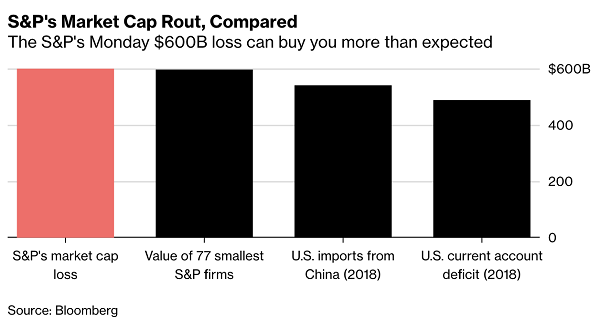 As you can see, the S&P 500’s single-day loss on Monday was more than the total value of all imports from China! What’s more, this number doesn’t include the losses for stocks not in the S&P 500. For instance, the Russell 2000 has lost $273.6 billion, and the entire market has already lost a bit less than $1 trillion, even after Tuesday’s mini-recovery.

This 6.8% Dividend Is Built for a Correction

Clearly this market swing doesn’t make any sense. And situations like that make a CEF like the Nuveen S&P 500 Dynamic Overwrite Fund (SPXX) particularly appealing.

SPXX holds top-quality dividend payers (and growers), many of which are have been hammered in the panic—and therefore have plenty of built-in upside. Those include companies without much China exposure, like JPMorgan Chase & Co. (JPM), Johnson & Johnson (JNJ) and Berkshire Hathaway (BRK.A).

SPXX Lets Us Pick Up Strong Stocks and a 6.8% Dividend 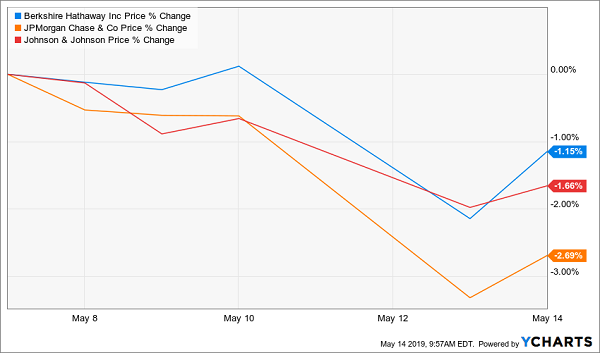 There’s more, too, because SPXX also uses covered calls (a type of option that the fund’s managers sell against the shares SPXX holds) to generate extra income, so the fund can deliver that 6.8% dividend to investors.

These options trades also smooth out SPXX’s volatility, meaning it has posted a smaller drop during this latest correction, as its options go up while the market falls:

SPXX Rarely Dives as Far as the Market 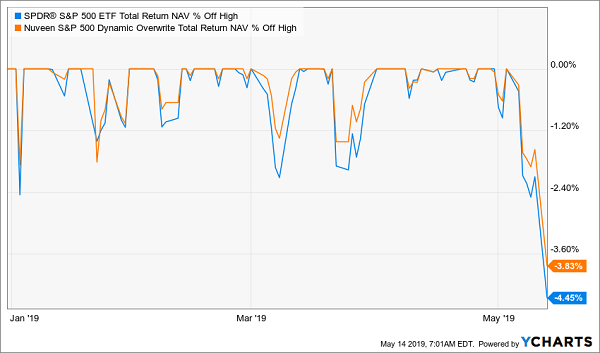 Finally, high dividend yields like that of SPXX give you a better shot at living on dividends alone in retirement—and not having to sell your stocks into a downturn like this latest one to generate extra income.

Doing This Would Be a Big Mistake Right Now

In light of the big hit stocks took in late 2018, you might still be hesitant to buy SPXX—or any stock fund—during this latest volatility. That’s understandable, but you’re making a mistake if you let your 2018 fears keep you on the sidelines.

While the trade war was one reason for the late-2018 downturn, it was really just a sideshow: that collapse had the Federal Reserve’s name written all over it.

In fact, the Fed has made it clear that it will not raise rates in 2019, and futures markets are betting that rates may actually go down in 2019: 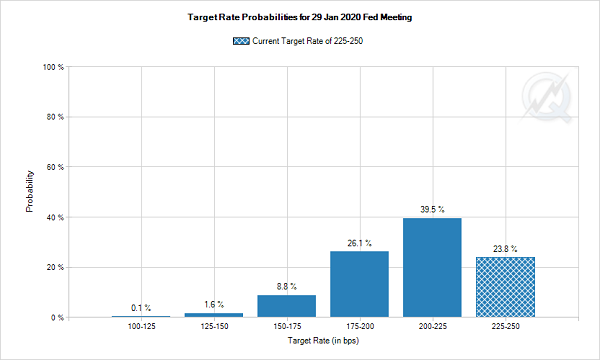 Let me leave you with this: the Fed is much more important to the economy than politics could ever be. The Fed’s easy monetary policy is a big reason why GDP growth was 3.2% at the start of the year, and it’s also why company sales and profits will stay strong.

It’s only a matter of time before the market realizes this and regains its footing (though we’ll likely see some bumps in the road first).

SPXX isn’t the only terrific opportunity this correction has handed us. It’s far from the highest yielder worth jumping on, either.

For example, consider the ignored CEF my team and I have uncovered: it boasts something most people will tell you is impossible: a 10.7% dividend that’s growing triple digits!

That’s right: this unsung fund yields a mammoth 10.7% as I write, and its payout has exploded 150% in the last decade:

1 Click for a Massive Yield and Soaring Payout Growth 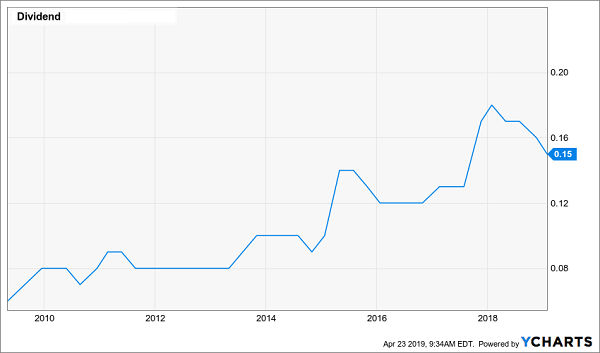 My 10.7%-paying pick is run by a hand-picked investment “all-star team.” These pros have quietly assembled a “no-gimmicks” portfolio of value and growth stocks that are great “buy the dip” opportunities now.

I’m talking about the likes of Visa (V), Microsoft (MSFT), Alphabet (GOOGL) and Abbott Laboratories (ABT).

I know what you’re going to ask next: how has this so-called “all-star team” performed in the past? 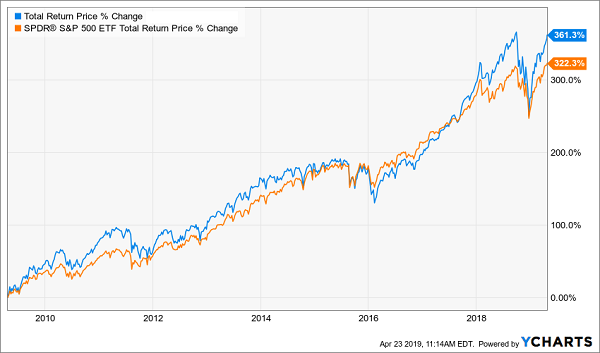 Best of all, as this monstrous return includes dividends, a huge slice of it was in cash, thanks to my pick’s massive dividend payout.

Oh, and if you hear “investment all-star team” and think “high fees,” fear not. This fund charges just 1.01% of assets, one of the lowest fees in the CEF universe!

Finally, this fund trades at an unreal 5.1% discount as I write. It’s only a matter of time before that shifts to a massive premium, given this fund’s market dominance, 10.7% yield and 150% dividend growth.

The time to buy is now.

Click here and I’ll share everything you need to know about this powerful income generator (name, ticker, buy-under price and more), plus full details on my 3 other top high-yield CEFs to buy now (average yield: 8.7% in all).