Are These “Brand Name Dividends” Up to 20% for Real?

Big brand names can’t rely on their past “glory days” forever. Today we’re going to make sure you don’t hold any “household name has beens” in your retirement portfolio.

I’m talking about washed up brands like Tupperware (TUP). The yesteryear firm’s shareholders just received yet another brutal reminder of the fickleness of brands in 2019.

Earlier this month, I pointed out the danger in blindly diving into high yields like Tupperware’s, which only hit double digits because its stock had been pelted so badly. Mere days later, shares of the ubiquitous container company sank to new all-time lows as Tupperware did the inevitable. It suspended its dividend:

Tupperware Melts Away With Its Dividend 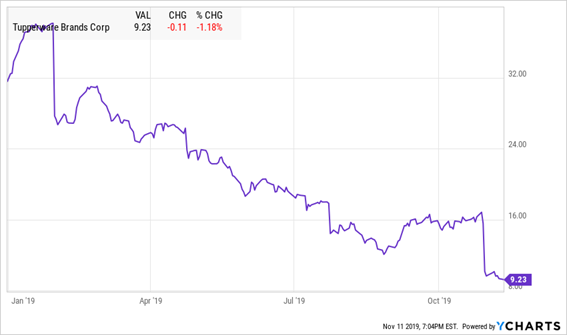 Tupperware isn’t the only canary in the “has-been coalmine.” Scores of income investors are still being lured into names they’ve known since childhood thanks to a combination of familiar brands and scintillating yields. And in a minute, I’m going to help you protect your hard-earned cash by flagging three similar big names yielding up to 20.2% right now.

The good news is, there are warning signs. Indeed, I cautioned investors about Tupperware’s perilous position months before its January dividend cut. TUP naturally hit my radar because of its eye-popping dividend yield, but a close inspection of its fundamentals—especially its cash situation—showed a clearly deteriorating situation. 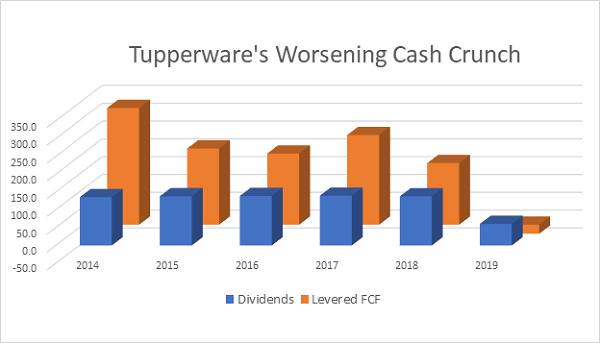 In fact, the most recent big drop in TUP shares wasn’t on the news of the dividend cut, but the woeful earnings report and guidance that preceded it by about a week. That included a stark downgrade in its cash-flow projections, from $80 million-$95 million to $65 million-$80 million.

The writing was on the wall. Many of the investors who bailed amid the report knew what it meant for the dividend. They were right.

If only they had heeded the clearly brewing dangers earlier.

Unfortunately, too many investors held on for too long because they trusted what once was a truly great American brand name made popular not just by the high quality of its storage products, but the home parties that once made the company stand out. But a look at its results show the obvious: Tupperware isn’t resonating here, or even abroad, like it has in the past.

And it’s not alone.

Today, I’ll show you three of these income landmines—yielding 7%, 10% and even 20%—so you can dump them before they go toxic, and avoid them if you’re seeking out new retirement-sustaining dividends.

(Please note: As we went to press, the shareholders of these two companies were voting on whether or not to approve this merger. Regardless of the immediate result, this “big picture” analysis remains relevant and should take priority in your mind.)

These are just a handful of the 600-plus publications that have informed and educated Americans for decades – and all of them soon will fall under the New Media Investment Group (NEWM) umbrella once it finishes its $1.4 billion buyout of publisher Gannett (GCI). The deal is supposed to achieve cost savings in a range of $275 to $300 million, but will that make up for the terminal declines in the business?

The industry’s revenues and profits have been averaging mid-single-digit annual declines over the past half-decade, and experts expect much of the same going forward. New Media, to its credit, has been growing revenues steadily for years,  but it has wavered between profits and losses during that time. Gannett looks more like what you’d expect from a modern-day newspaper company: 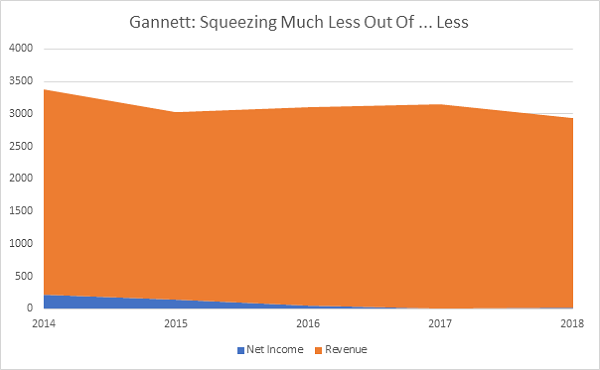 But there’s so much more.

New Media is borrowing almost $1.8 billion from Apollo Global Management (APO) to get the deal done, and it’ll be paying an 11.5% rate for the privilege. Moreover, NEWM has already cut its dividend in half, to 19 cents quarterly, as a buffer against the financial hardship it’s about to endure to make the merger happen. So that 20.2% yield will really be closer to about 10%.

Also, New Media’s GateHouse division and Gannett are two of the standard-bearers for stripping newspapers to the bone. This is an industry whose existential crisis has forced one of its legacy names, the Salt Lake Tribune, to chase nonprofit status just to survive. But NEWM will continue trying to generate fat dividends and shareholder returns the only way it knows how: bleeding its products dry to the point where ever-fewer customers see any value in their subscriptions.

You’ll rot your portfolio with that kind of holding.

L Brands (LB) is a tale of two retailers.

On the one hand, you have Bath & Body Works – a purveyor of all things fragrant, from body lotions and hand sanitizers to perfumes and candles. It’s growing – pretty impressively, especially for a brick-and-mortar operator. Revenues improved by 8% year-over-year in 2018. B&BW could actually register low-double-digit growth for 2019.

But Bath & Body Works, which made up 35% of 2018 sales, isn’t the problem.The problem is Victoria’s Secret, which makes up 55% of revenues but is a lacy shell of its old self.

Victoria’s Secret lingerie was once a statement in and of itself. It was a premium brand that demanded premium dollars. Its annual fashion show was appointment programming.

But competitors such as American Eagle’s (AEO) Aerie have cut into the brand’s relevance, and customers have complained about slipping quality. Victoria’s Secret has even resorted to heavy promotions to rejuvenate sales, to no effect. The brand’s revenues dropped by 2% last year. Comparable-store sales plunged 6%. It reported similar results in its most recent quarter.

Even the Victoria’s Secret Fashion Show has fallen from grace. Its December 2018 ratings were the lowest in the show’s history. That resulted in a May announcement that L Brands wouldn’t broadcast the show on network TV … and in July, one of the company’s models said the show wasn’t happening at all.

The overhaul truly became official in August, when CMO Ed Razek, who had been with Victoria’s Secret since 1983, announced he would be retiring.

This is a rudderless ship – one whose financial struggles have already forced the company to cut its dividend once, in 2018. But its yield is back up to around 7% after shares shed a third of their value in 2019, tempting desperate income investors once more. 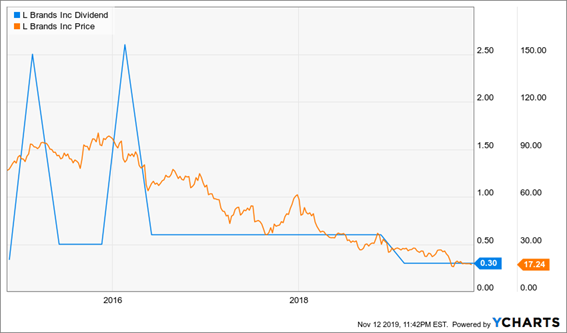 Most coverage of Macy’s (M) includes some declaration that brick-and-mortar retailing is dying, and that’s what’s killing Macy’s. But Bath & Body Works shows that’s not quite the case.

The rise of e-commerce is hurting physical retailers, sure, but more specifically, it’s weeding out companies that either don’t have anything interesting to sell or don’t know how to attract modern consumers. Have you been to an Apple Store recently? They’re jam-packed even if the rest of the mall is dead because they sell products people want, and because Apple (AAPL) was smart enough to use them as service hubs, too.

Macy’s isn’t differentiating itself. Same old wares, service keeps getting worse. They’re literally shrinking floor footprint to try to make their stores more effective and save on staffing. Last year, former Sears and Neiman Marcus executive Steve Dennis told the WSJ, “If you’ve got too much space, it means your brand isn’t resonating. It’s not a real estate problem, it’s a brand problem.”

Macy’s profits are shrinking, but they can still cover the dividend easily. More problematic is cash flow, which is vanishing. Levered FCF was $1.5 billion three years ago, $1.0 billion two years ago and $836 million last year. It’s actually underwater in the trailing 12 months, at just $284 million in LFCF versus $463 million annually on dividends. 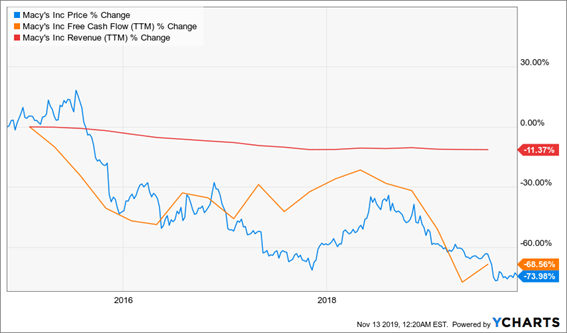 I expect Macy’s to occasionally provide glimmers of hope – easy comparisons and occasional boosts in online sales should help. But this legacy retailer is fading into obscurity, and I can see a scenario in a couple years where Macy’s is forced to raid the dividend to put more cash into turnaround strategies.

This three-pack is remarkable. These stocks yield an eye-popping 12.2% on average and still could put you in the poorhouse in five years.

But the best retirement solution lies in the middle ground: Where the dividend-rich stocks in my “Perfect Income Portfolio” reside.

Market dynamics have changed over the past couple of decades. Treasury bonds pay next to nothing. People are living much, much longer than they used to. Nest eggs are being stretched paper-thin. As a result, the basic 2%-3% yields on “classics” such as Procter & Gamble (PG) and Coca-Cola (KO) just won’t cut it anymore.

Instead, investors – especially those with more modest nest eggs – need roughly 3x to 4x the yield of the broader market. And those substantial income checks need to survive not just through 2020 or 2025, but literally decades down the road.

My Perfect Income Portfolio offers exactly that. In fact, several of my readers have emailed me to tell me this portfolio has literally doubled, tripled, or in a few cases actually quadrupled their annual income.

Also, this is a buy-and-hold portfolio. This isn’t a crazy options tactic or a set of short-term swing trades. It’s just a set of under-the-radar, contrarian income plays that can quickly build your wealth without piling on the extra risk of gambling on newspapers and dying retailers. 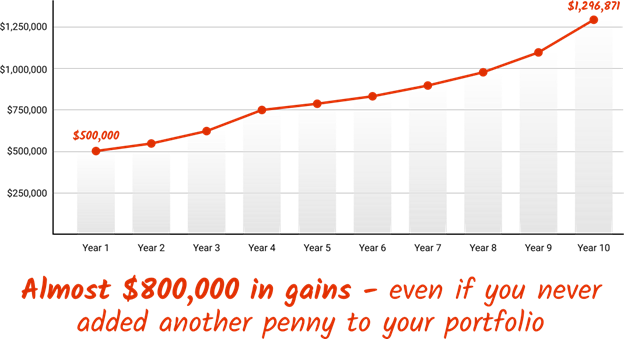