Most dividend investors understandably love the idea of an 8% No Withdrawal Portfolio. It’s a simple yet “game changing” idea that you don’t hear much from mainstream pundits and advisors.

Find stocks that pay safe 7%, 8% or more and you can retire comfortably, living off dividend checks while your initial capital stays intact (or even appreciates).

Now this strategy is a bit more complicated than simply finding 8% yields and buying them. Granted the recent stock market pullback has benefited investors like us because we can snag more dividends for our dollar. Yields are higher overall, and that’s a good thing.

Next we must smartly select the stocks that are going to pay our dividends securely – without tapping their own shares prices to pay us.

Consider Cohen & Steers Infrastructure Fund (UTF), a closed-end fund focused on energy, water, transportation and other infrastructure-related companies. It was distributing a fat 8.8% back in February 2016 when I recommended it to my Contrarian Income Report subscribers. Its healthy 9% yield helped deliver 70% total returns (including dividends) in just three years!

Here’s What a Healthy 9% Yield Can Do 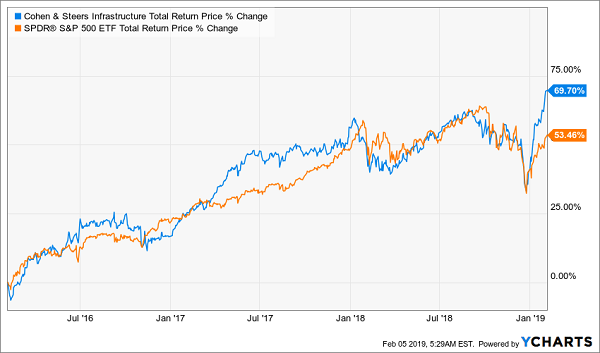 On the flipside, consider Tupperware (TUP). This ubiquitous home-brands name was yielding 8.4% in late October 2018 when I warned investors about its increasingly unstable condition – just a few months after I wrote a cautionary note that TUP’s dividend had been climbing for all the wrong reasons.

The good news? Fast-forward less than half a year, and Tupperware’s dividend is a much more manageable-sounding 3.9%.

The bad news? Tupperware yields so much less now because it hacked its payout by roughly 60%. It also reported sinking fourth-quarter revenues and served up an ugly forecast for 2019, sending investors fleeing to the tune of -24% since my October warning. 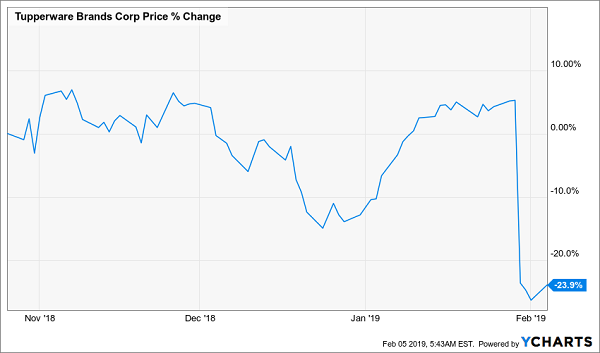 Today, I want to examine a half-dozen high-yield picks delivering anywhere between 8.2% and 14.2% in annual income that you might be eyeballing right now. A few of them are indeed worthy of your attention … but a few could take your legs out.

If you’re not familiar with BDCs, you’re not alone. This is a young business structure that Congress created back in 1980 to provide financing to small and midsize businesses that they otherwise couldn’t get from bigger banks. The world of BDCs is small, and these aren’t big firms – Ares Capital is top dog at just $7.1 billion, which, for perspective, makes it smaller than GrubHub (GRUB).

Ares Capital boasts more than 300 investments across the business spectrum from dental service providers to ignition interlock device manufacturers to biotech software makers. It leans heavily on floating-rate debt while borrowing at fixed rates, which means hikes to the LIBOR rate can actually help Ares’ profitability.

This BDC is on the right-by-a-lot track. The Small Business Credit Availability Act signed into law in 2018 will allow Ares to ramp up its leverage to juice returns. And the company not only delivered its first dividend hike in six years (in August 2018), but it’s backing that payout with fatter profits. In its third quarter, the company cranked out 45 cents in core earnings – a 25% jump in profitability that covers its new-and-improved 39-cent payout with room to spare.

The main thing you need to know about Prospect Capital (PSEC), another BDC, can be shown in one chart: 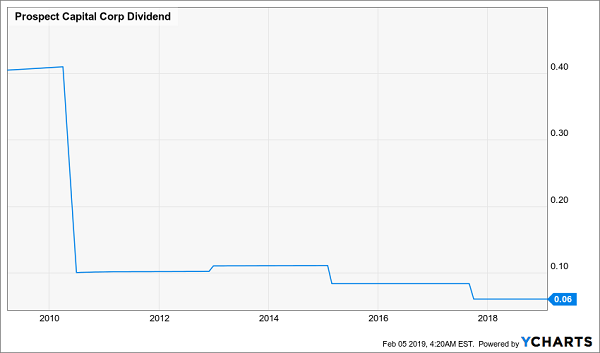 Prospect Capital is like many BDCs in that it invests across a wide array of small to midsize companies, covering dozens of industries including consumer finance, media, internet software, energy equipment and even mining. It does so primarily through first- and second-lien senior loans, as well as mezzanine debt, and it also invests in some other high-income-producing strategies, such as collateralized loan obligations (CLOs) and marketplace lending.

Good in theory, rough in practice. PSEC’s net investment income (NII, an important BDC profitability metric) has trailed off over the past couple of years, from $371 million in 2016 to $287 million in 2018. But the real concern is the tight-to-nonexistent dividend coverage that has caused it to slash its payout several times in the past. Prospect Capital not only slashed its dividend by 28% in 2017 as its NII was on the decline, but even by about 25% in 2015 while NII was actually on the rise.

In its fiscal 2018, PSEC paid out 77 cents in dividends per share on 79 cents of net investment income – it would have overpaid if it weren’t for the dividend cut.

Even if Prospect Capital temporarily finds itself on recovery road, the company’s highly aggressive (and questionable) dividend practices make it an untenable holding.

I mentioned Cohen & Steer’s UTF earlier, and I can’t stress the importance of having a CEF or two in your portfolio.

While exchange-traded funds have grown in popularity because of their dirt-cheap fees, the best actively managed closed-end funds have managers who can better navigate complex investing environments, they can use debt to amplify their bets, and they can use other tactics such as options trading to generate higher income out of the very same holdings you’d find in ETFs.

The Eaton Vance Tax-Advantaged Dividend Income Fund (EVT) is a blended fund that “seeks to distribute a high level of dividend income that qualifies for favorable federal income tax treatment.” It does so by holding mostly American dividend stocks (72% allocation) such as JPMorgan Chase (JPM) and Johnson & Johnson (JNJ), but also junk bonds (9%), investment-grade corporates (9%) and preferred stock (6%) and a small smattering of other assets.

This exposure to high-yield assets, as well as the use of leverage, helps this fund generate an 8%-plus distribution rate – but more importantly, better results than widely held dividend ETFs such as the Vanguard High Dividend Yield ETF (VYM) and the Vanguard Dividend Appreciation ETF (VIG). 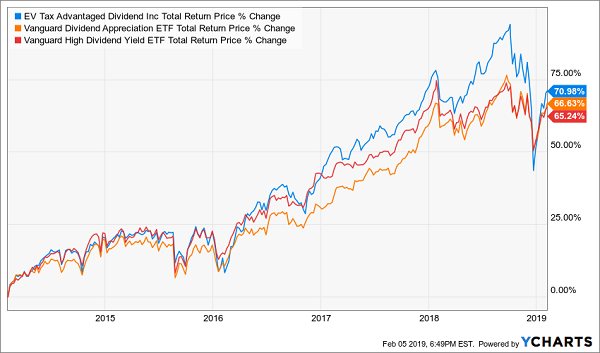 AT&T (T) and Verizon (VZ) have long been the reasons why investors equate telecoms with high dividends. They’ve been good stewards of that reputation, too, offering stable and rising dividends for some time.

However, smaller telecoms have sullied that image. Windstream (WIN) suspended its dividend in 2017, and Frontier Communications (FTR) did the same in 2018.

Now, everyone is waiting to see whether CenturyLink (CTL) will be the next to drop the ball.

Louisiana-based CenturyLink provides residential high-speed internet, TV and phone services, as well as business and government communications services, across 37 states. And the company expanded its horizon with the 2017 acquisition of Colorado-based Level 3 Communications – a move meant to stave off declines in its core business.

It’s difficult to say whether CenturyLink will in fact cut its dividend. While its payout ratio as a percentage of straight-up earnings has long sat north of 100%, its cash payout ratio looks much more acceptable. 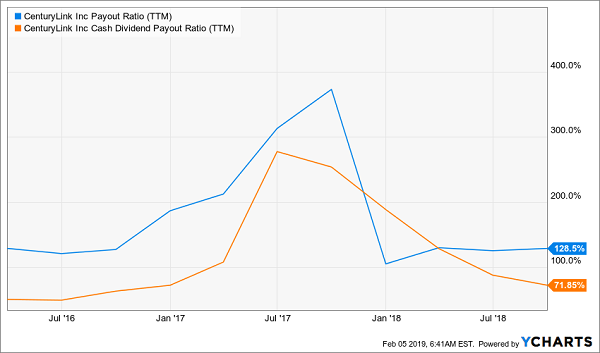 The problem is, even the bullish pros aren’t ruling out the idea of a dividend cut. While Morgan Stanley analyst Simon Flannery thinks the likeliest scenario of its Feb. 13 conference call will be “constructive” guidance that includes maintaining a dividend, he also sees two other (less likely) scenarios that involve a cut – one in which the payout is cut less than expected, and another in which it’s worse than feared.

It’s entirely possible that CTL enjoys a relief rally following its quarterly results, but a will-it/won’t-it dividend situation isn’t where you should build the foundation of a buy-and-hold portfolio. Organic growth remains a problem, too, with third-quarter revenues showing a 4% decline.

Don’t gamble on CenturyLink. If a true turnaround is in the cards, you won’t have to get in at the absolute bottom to enjoy fat long-term total returns. This is a “show me” stock, so wait for it to show a little more.

Starwood Property Trust (STWD) is a mortgage REIT dealing primarily in first mortgages, but also in bridge loans, mezzanine loans, subordinate debt, preferred equity and conduit first mortgage loans in the United States and Europe. And during its most recent quarter, the company’s asset base reached a record $16 billion, and its commercial loan portfolio hit an all-time high $7.5 billion.

Vital to income investors is the company’s dividend coverage. While some mREITs really stretch to make their payouts work, STWD has averaged an 89% payout ratio of its core earnings. Yes, that’s probably too high to expect increasing dividends going forward, but it does mean the current level of dividends is manageable.

“If GameStop can’t catch a break while console sales are red-hot, it’s going to be staring at an enormous problem when the console cycle slows down again, and as more game purchases are done online.”

Quick! Someone Blow Into GameStop’s Cartridge! 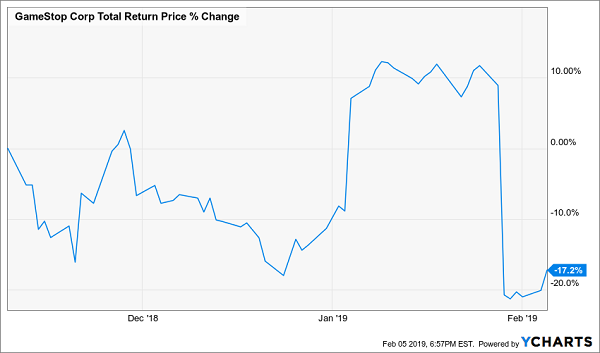 The company slashed its 2018 earnings outlook in late November alongside its third-quarter earnings report, from a range of $3.00-$3.35 to a range of $2.55-$2.75 – this despite strong Black Friday and Cyber Monday sales.

Even at the low end of GameStop’s new earnings forecast, the retailer is still paying 60% of its profits out as dividends, which on its own is far from a red flag. Still, the announcement is yet another continuation of GameStop’s deteriorating business situation, and it certainly qualifies as “bad enough.”

Then came a new wrinkle in January. GME shares cratered by nearly 30% after it announced it was calling off its search for a buyer. That’s a disconcerting statement about the value that investors saw in GameStop: namely, they weren’t expecting a fundamental turnaround, but instead they were hoping for a white knight to swoop in and save the company.

If you want to retire well, you have to be able to identify 8% yielders that can not just survive such high payouts for a few years, but actually thrive while cranking out higher payouts over time … and deliver some capital gains to boot!

And that’s exactly what the “triple play” stocks in my 8%-yielding “No Withdrawal” retirement portfolio are already doing for me!

A surprisingly high number of dividend stocks are actually wealth traps in disguise. Think about your typical blue-chip stock in the Dow or S&P 500. By the time you get to stocks yielding even near 3%, you’re looking at companies that are well into the later innings of their growth cycles … if they’re growing at all. So not only are you forfeiting any hope of significant stock-price appreciation going forward, but you’re doing it to earn just $30,000 in annual retirement income on a million-dollar nest egg.

If that has you sweating a little bit, good – it should! That kind of return will have you bleeding your nest egg dry to survive after just a few years off the job. You worked too hard for decades just to struggle financially in your golden years.

This is your wake-up call.

You need almost three times that income, plus dividend growth to beat back inflation, not to mention capital appreciation to keep building your nest egg. That’s not easy to find, but a handful of winners in this market have what it takes.

My “No Withdrawal” portfolio is an all-star cast of stocks that will deliver an average yield of 8% that will also grow your nest egg – an important aspect of retirement investing that most other strategies leave out. But if disaster strikes and you have to take a chunk out of your nest egg, you’re also taking a chunk out of your income potential.

This diversified set of picks features the best of several high-income assets (including closed-end funds, which I just discussed with you). Of course, only a handful of stocks and funds meet my rigorous standards for this multipurpose strategy. But the result is an “ultimate” dividend portfolio that provides you with …

Let me show you how to secure the comfortable retirement you’ve worked your tail off to enjoy. Click here and I’ll provide you with THREE special reports that show you how to build this “No Withdrawal” portfolio. You’ll get the names, tickers, buy prices and full analysis of their wealth-building potential – and it’s absolutely FREE!